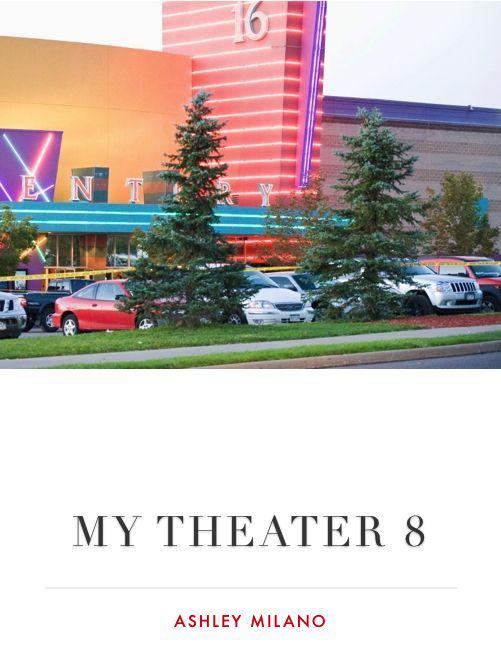 My
Theater 8 – Written by Ashley Milano

The
following story was written by my 14 year old daughter Ashley. In it
she shares the events leading up to and including the tragic event of
July 20
th
2012 on which a gunman entered our local Century 16 movie theater
during a special midnight showing of the highly anticipated Batman
movie “The Dark Knight Rises”.

The
gunman entered theater 9 which was wall to wall with theater 8. He
was armed with multiple weapons and gas canisters that filled the
building with either pepper spray or tear gas. He opened fire at
anyone he could see. The victims that lost their lives or received
the most serious of physical injuries were in theater 9.

However,
many in theater 8 did receive injuries from bullets and debris, not
to mention the mental trauma that would follow them for the rest of
their lives.

The
movie theater was filled with people of all ages, from toddlers to
senior citizens. It was a family event for many people and my heart
bleeds for everyone that had the unfortunate luck of being there that
night.

My
daughter Ashley and my 19 year old son Alex were in theater 8. Any
profit from this Kindle book will go directly to them to use anyway
they see fit.

I
remember buying the tickets “6 days” before the showing, all I
wanted to do was hold them and even show them off a bit to my
friends. But what could I say? I was going to see my favorite
superhero's last movie, I couldn't help it.

The
night before the showing I couldn't sleep knowing it was so soon, my
brother and I got around 5 hours of sleep in total. It was also my
first midnight showing, Batman
and
a
midnight showing! This day couldn't get any better.

My
mom and dad were a bit hard to convince since I've never been out
after 10pm without them. They were going to see the movie with us,
but had to change their minds last minute since my little brother was
in the hospital having his appendix removed. Ouch!

We
spent the day at The Children's Hospital with my little brother who
just had surgery and we watched movie trailers and I continuously
asked when we should leave.

My
brother Alex kept calling the theater to check up on the line. We
decided we were going to wait until 8PM to go to the theater. But, we
were to eager to wait that long, so we said our goodbyes, grabbed our
bags and checked out of the hospital visitor area right outside the
doors. The nurse at the desk said “
Are
you guys checked out for the day or are you planing to come back?”
I never thought about how ironic that was until now.

We
both impatiently waited in the elevator from the eighth floor to the
first floor, slightly bragging about our tickets to one of the
nurses
.
When the elevator opened I started to run to the door, I was so eager
to get the night started. My brother was joking with me and started
to
skip
and click his heels together as he jumped up in the air. Just like a
little kid would.

When
we first got into the building I saw this little girl whom I thought
to be around five or six with beautiful long dirty blonde hair, so of
course I complimented her about it. She smiled shyly and ran back to
her line..for theater 9. Not thinking anything of it, I smiled and
handed my ticket to the employee checking the tickets. "Enjoy
the movie!" he said.

Since
the showing was at 12am you might think we'd be tired. but I was too
excited to even notice. We got there around 8 o'clock cause hey,
what's a movie without good seats? I'm glad we did get there early,
the lines were HUGE! I remember seeing the tired look in my brothers
eyes, though I couldn't blame him. But once the guy let us in and we
noticed the smell of the popcorn and we both got pumped up again.

Not
a minute after getting in line my brother being the over excited
social junky that he is, started to converse with a really awesome
couple in front of us. They seemed to be in their 20's and after
chatting with them we learned their names were Noemi and Josh. At
that moment I looked around, we were 5th and 6th in line.”
Yes!!”
good seats here we come!'

As
people kept piling up in our line and my brother and the couple
continued their conversation on whether it was a good idea to put
Anne Hathaway as cat woman in this movie I noticed these two women
sitting beside us, after loads of shy glances in our direction I was
going to turn around and start a conversation when I smelt what I
thought was burnt popcorn and I looked towards the kitchen and saw a
decent amount of smoke fill the air, after a few sly comments were
whispered under peoples breathes about the movie staff I noticed
people getting up from their spots on the floor. They let us in the
theater about 2 hours early!

We
followed the couple in, but then went our separate ways, they liked
the middle seats. We liked the top ones. "See ya after the
movie!" My brother shouted.

I
was about to ask my brother if we could sit on the 2 seaters on the
right side of the theater, but once I turned to ask him he was
already sitting in the middle of the 3rd row down, staring at me
displeased as if he knew I was going to ask, so I sat one seat away
from him in the same aisle. He likes to hit me and ask if I saw what
just happened...“Of course I did. I'm watching the same thing you
are!”

After
people kept coming in at their own pace a few holding popcorn and a
drink, two people came and sat below us. It was a girl around Alex's
age, she was wearing a batman shirt and she was with what looked to
be her dad. Later on they told us their names; Devin and Larry.
'Oh
no, here we go..'
my
brother started chatting them up. More like flirting with Devin. Well
we had two hours to burn, so why not converse some more.

About
an hour and a half into the waiting we also started conversing with
the people above us. We talked to around 10 people in total, New
record! A man sitting right below me and I played Tick-Tack-Toe on
our hands with some spare Eyeliner that was in my purse, and my
brother was quizzing everyone in the row below us about the batman
comics.

I
looked around the theater, it had all these people talking amongst
each other and loads of children laughing and running around hugging
someone dressed as Batman, heck, even the one dressed as Bane was
getting hugs from them. I couldn't help but smile. Today was awesome!

Once
the room darkened everyone started finding their seats and clapping
and whistling and shouting and screaming you can just tell everyone
was pumped! I looked around once again and noticed two really tall
guys sitting the seats I wanted.
Aw
man! I really wanted to sit there! O
h
well, couldn't be helped!

We
watched the commercials as everyone clapped and laughed and yelled
the whole way through, until the “Man of steel” movie preview
that's when it fell silent around us, suddenly a bored sounding voice
shouts beside me, "We came to see Batman." I couldn't help
but slam my face in to my hand. “
Alex
you moron.”
I
laughed as the movie started so I tried to stop..Failing. But I
tried.

Everyone
watched intently, staring at the screen in awe, some looked like they
were about to Jump out of their seats even! Cat woman had just given
the guy fingerprints when a shooting scene came on with the SWAT and
some of Bane's guys when we heard VERY realistic sounding shots and a
few small screams, my brother was about to clap thinking it was extra
props for the premiere but I knew better, they sounded..Off, somehow.

I
grabbed my brothers arm and looked down only to see a screen of smoke
or fog cover the lower half of the theater as people from the right
side were starting to flee holding parts of themselves and others.

My
brother lowered his curiosity and reassured me it was only an idiot
with fireworks, that was until a man in a white shirt came running in
looking around for a second then shouting "Hey guys, don't go
though the front exit! There's a guy shooting in the lobby!!"
Then he left, I remember my brother whisper under his breath "You've
got to be kidding me."

Then
there was more shooting and the emergency alarm went off as the look
of realization and shock came to my brother's face. "There has
been an emergency in the building, please exit the building
Immediately
,
This is
not
a
drill, I repeat. this is
not
a
drill." said a voice over the intercom in the theater.

Alex
stood up as I told the person in front of us to leave cause they
didn't move at all saying they wanted to finish the movie. My brother
and I watched as everyone tried to leave through the back exit and
through the main door.

He
grabbed my bag and put it over my shoulder and he did the same, then
he pulled my arm towards the crowd but I pulled back and pointed
towards the one nearest us that everyone seemed hesitant to use, the
emergency exit in the back of the theater that leads to the lobby. He
stared at the door for a second then nodded and followed me through
it. A few people were running ahead of me as I opened the door.

I
walked cautiously after walking out the door and glanced at the other
exit next to ours there was a women there with red on her shirt, It
didn't register that it was blood at the time. She kept screaming
"Turn on the lights, Turn on the lights!" I kept going
afraid to look back. That was the exit to theater 9, the one next
door..the one with the little girl..the one with what sounded like
gun shots.

I
noticed the fogginess of the lobby, but I didn't care for that. I
kept running as I could feel the gas getting to me, my throat and
eyes started to have a stinging, burning type of sensation. The first
thing that had crossed my mind was pepper spray, I was sure of it.

Here Comes Trouble by Andra Lake
Devil Hath Come (an FBI/Romance Thriller ~book 7) by Kelley, Morgan
Foxworth Academy by Chris Blewitt
The Winds of Marble Arch and Other Stories by Connie Willis
Wilde Edge by Susan Hayes
Star Trek: Brinkmanship by Una McCormack
No Reason to Run by Michelle Howard
Scraps of Paper by Griffith, Kathryn Meyer
The Bringer of Light by Black, Pat
Once Upon a Highland Christmas by Lecia Cornwall
Our partner