Mystery of the Melting Snowman 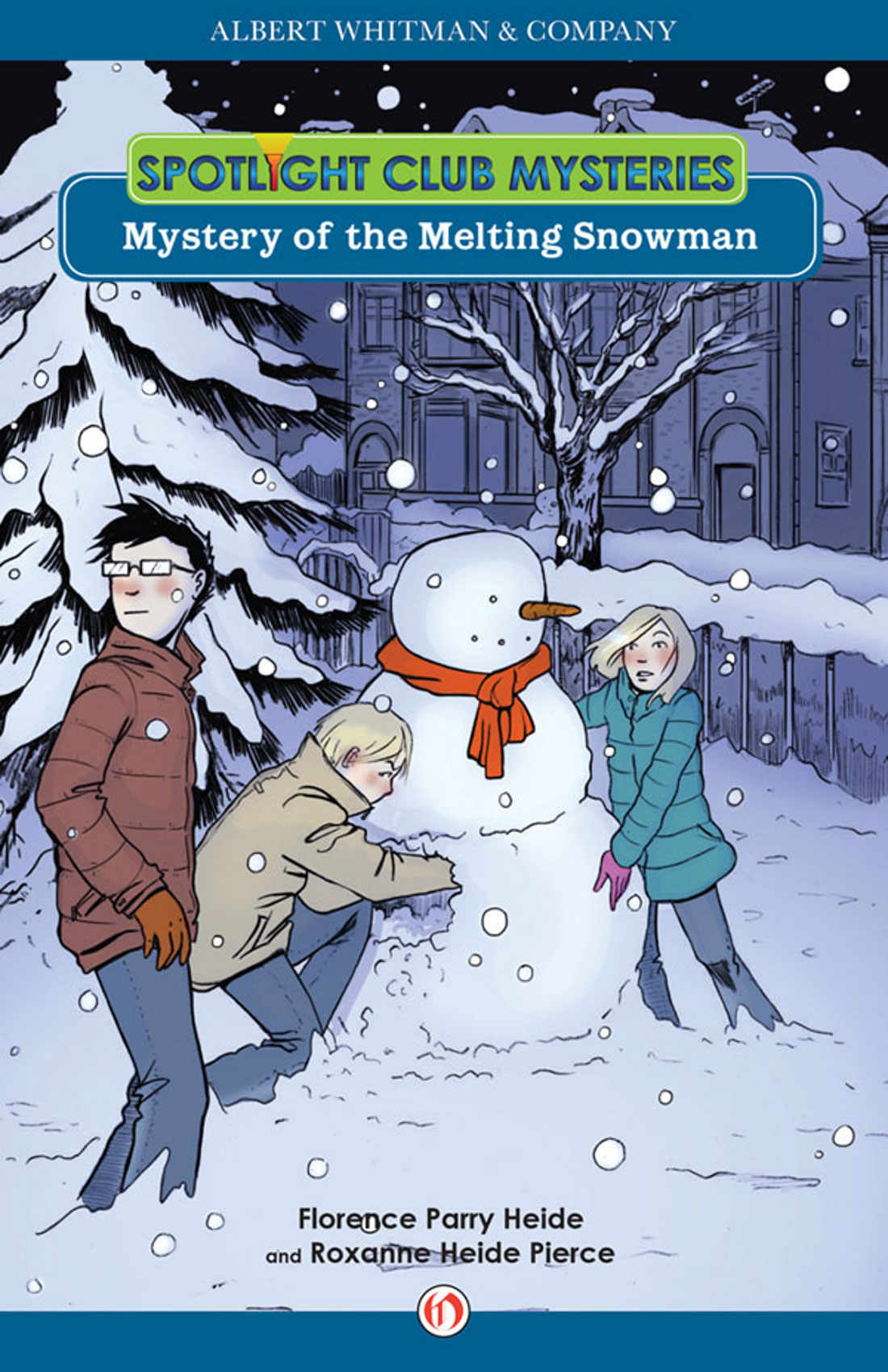 1. Shadows on the Snow

4. Inside the Red House

8. Secret of the Iron Dog

10. Behind the Locked Door 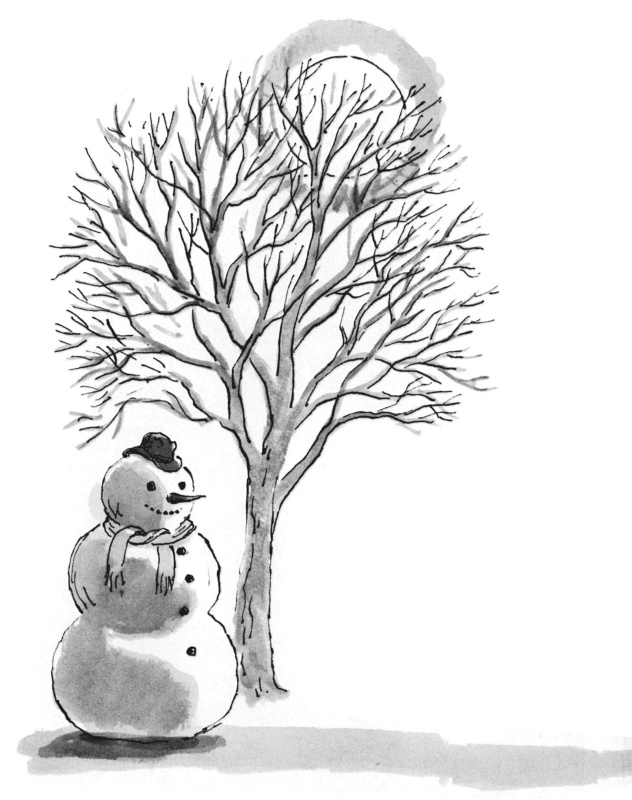 Chapter 1
Shadows on the Snow

S
OMETHING WAKENED JAY
suddenly. He opened his eyes wide. Light was flashing onto his face through his bedroom window.

He sprang out of bed and ran over to the window. “The signal!” he whispered out loud. It was pitch dark between the flashes of light. Snow had started to fall.

It was Dexter, right next door, flashing a light from his own window. The signal was a special one for the Spotlight Club members. It meant
Come over now!
They never used the telephone late at night. Their parents had made that rule.

Jay ran back to his bed. He reached under it and grabbed his own flashlight. Leaning against the cold windowsill, he flashed one long flash and two short ones. That meant he’d be right over.

He threw on his clothes. He kept his flashlight with him and went as quietly as he could into his sister’s room.

“Cindy!” he whispered. “It’s the signal from Dexter.”

Cindy nodded. She was already out of bed and reaching for her clothes.

Jay crept down the stairs. He grabbed his coat and scarf from the hook in the hall.

He let himself out of the front door very quietly and walked out on the porch. He ran down the steps and turned to go over to Dexter’s.

A tall snowman stood in the yard. Just as Jay passed it he saw Dexter crouching on his porch. Dexter pointed. Jay looked. A tall figure dressed in a parka was moving quickly and quietly across the snow.

Jay stared after him. Dexter ran over to Jay.

“Hurry,” whispered Dexter. “We’ve got to follow him. I’ll explain later.” The boys started to run across the snow. Except for a single street lamp swaying on the corner, there was no light anywhere.

Suddenly they heard the sound of a car door slamming. Then an engine starting up. The car drove off without turning its headlights on.

“I don’t know,” Dexter said. “But he was out in front of the Maxwells’ house next door. He was taking their snowmen apart. I’d gone into the bathroom on that side of the house to get a drink of water. And there he was out in the Maxwells’ yard. I kept watching. He smashed the snowmen to pieces! Then he started over to the snowman on our lawn. That’s when I signaled you.”

The boys started back to Dexter’s house.

“What do you think he was doing?” asked Jay.

“I don’t know,” answered Dexter. “He must have been looking for something.”

“Looking for something in a snowman?” asked Jay. Then he grabbed Dexter. “Look!” he whispered. “There he is.”

“Where?” asked Dexter, looking around.

“Behind the snowman in your yard,” said Jay, peering through the dark. Suddenly they both realized it was Cindy.

“Where were you?” she whispered. They ran up to her and explained quickly in hushed voices.

“He had to be looking for something,” concluded Dexter.

“He was looking for something, all right,” said Jay. “But he didn’t know exactly where to look. First he tried the snowmen that were in the Maxwells’ yard.”

“He didn’t find anything there,” said Cindy. “He was going to look in this snowman next.” She tapped its stomach with her mitten.

They looked at the snowman from top to bottom.

“Let’s take the snowman apart,” said Cindy quickly. “Before he comes back.”

“I’ll try to dig it out from the back,” said Jay. “The man won’t see me that way. You two stand guard. Give the signal if you hear or see the car coming back.”

“Maybe he’ll park it somewhere else and walk,” said Cindy. “We’ll have to work fast.”

Jay tried to make himself as small as possible behind the big snowman. He took a penknife from his jacket pocket. Carefully he dug at the snow, starting with the head.

He pushed his hand through the snow around the hole he had made. Nothing. Nothing but snow.

His fingers were so cold he could hardly move them. He blew on them for a minute. Then he started to dig out a hole in the middle part of the snowman.

A tree branch creaked above him and he jumped. He kept digging. Suddenly his fingers hit something. Something hard, harder than snow.

Jay drew his hand back quickly. He motioned to Dexter and Cindy. They ran over. “There’s something in here,” whispered Jay. “And it’s mighty cold and hard.” He blew on his fingers again.

“But we don’t want him to come back and see us,” said Cindy. “Let’s take turns watching for his car.”

It took a long time. They had to take most of the snowman apart. And then they were able to pull the object out.

“What is it?” asked Jay. Dexter brushed the snow off. They all stared.

It was a heavy iron dog, sitting on its haunches, with its paws against its chest. The iron jaws held an iron ball.

They stood looking at it. “I don’t understand,” whispered Cindy finally. “Who put it in the snowman? And why?”

“Let’s put it back,” said Dexter. “We don’t know who it belongs to, but it doesn’t belong to us. The man will come back and find us and—”

“No,” insisted Jay. “Whoever came for it came sneaking. That means he was doing something wrong.”

“I know what to do,” Dexter said quickly. “Let’s take the iron dog in the house and stay up and watch. We can see who comes for it. Whoever it was might be stealing it. If he’s on the level, he’ll come back in the morning and ask about it. We should keep it safe until we know what it’s all about.” 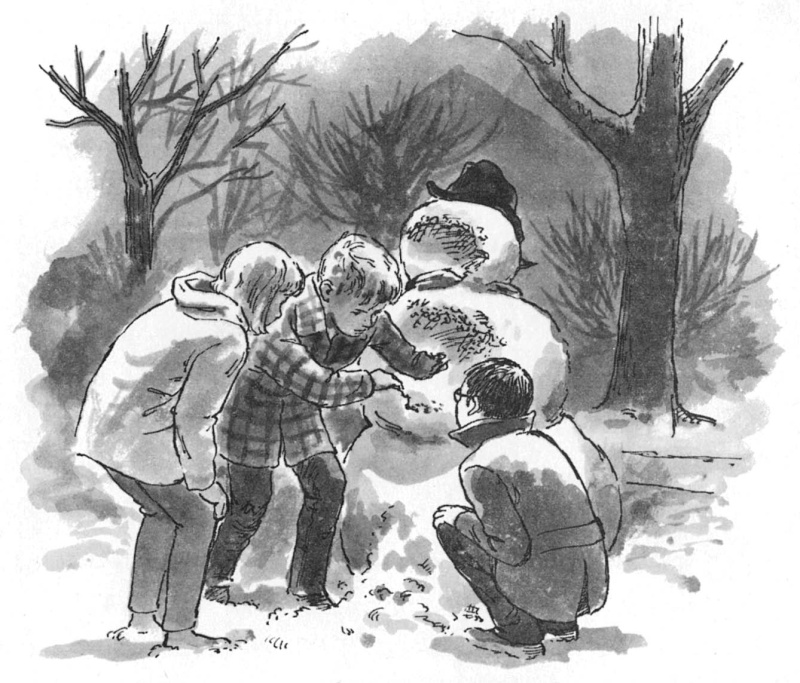 “Right,” agreed Jay. “Let’s put the snowman back together just the way it was. Then there’s nothing to suspect. Maybe the man will come back and try to find the dog. That way we can see him and find out what he’s up to.”

In a few minutes the snowman was as good as new.

Dexter took the iron dog. “I’ll carry it into the house,” he said. “I’ve got gloves.”

Jay and Cindy were right behind him. Cindy turned to look at the snowman as they shut the door. It looked just as it had before.

Dexter set the iron dog down in the front hall. “Why was the dog in the snowman?” he muttered.

“He’ll come back to get it,” Jay said. “We’ll have to stay here all night and take turns watching.”

“What will he do when he finds it’s gone?” wondered Cindy out loud. The boys shrugged.

“If we’re going to stay here for the night,” said Jay, “we’ll have to let Mom know where we are.”

“I’ll go over and leave a note,” Cindy offered. “I have to get my notebook anyway. I can’t think without it.”

“Your notebook!” exploded Jay. “It’s the middle of the night, and we have a mystery and a dog and some stranger who’s breaking up snowmen out there somewhere, and you think about your notebook.”

“You’ll be glad I’ve got it,” said Cindy. “I can keep track of every clue and write down questions as we think of them.” She stood for a moment looking out at the snow. Was the stranger waiting and watching out there?

“I know. But I’m going with you anyway,” answered Jay.

In a few minutes they were back. They had left a note for Mrs. Temple, and Cindy had her notebook. They had seen no one.

Dexter had waited and watched. When they came in, he pulled three sleeping bags from the closet under the stairs. “We can take turns staying awake and watching,” he said. “The watcher can sit on the radiator and look out the window. If the lights are off in here, no one can see in.”

Cindy took her notebook. “Let’s figure out what we know while we’re all wide awake.”

“You mean, what we
don’t
know,” said Dexter.

“Here’s what we know so far,” Cindy said. “An iron dog was hidden in the snowman. Someone came to get it. Let’s call him Mr. X, the way we always do when we’re working on a mystery.” She wrote busily, reading out loud as she wrote:

Query
: Why was Mr. X pulling the snowmen apart?

Answer
: He was looking for something.

Query
: What was he looking for?

b) He’s wearing a parka with a hood.

c) He doesn’t want to be seen, therefore he is probably doing something wrong. For example, taking the dog, which doesn’t belong to him.

d) He left in a car and didn’t turn the headlights on, so he didn’t want to be seen leaving.

Cindy tapped her pencil. “Where was his car parked?” she asked.

“Just at the end of the street,” said Jay. “There’s a broken water main, and this street is blocked off. His car was right behind the barricade.”

“Whoever he is, he’ll be back,” Dexter said, pulling his glasses down on his nose.

Cindy reached over and touched the iron dog. “What’s so important about this dog? Why does Mr. X want to get it? Who put it there? What’s it all about?”

“What on earth is going on?” asked a voice from the top of the stairs. It was Dexter’s sister Anne.

“Someone was knocking the snowmen down,” explained Jay.

“The boys chased him and lost him,” added Cindy.

Anne shook her head. “I don’t mind mysteries. But I mind mysteries in the middle of the night. When I heard you talking I thought you were burglars until I realized burglars don’t stand around talking. They start burgling. I just guessed it was you three. My ESP told me.”

She yawned. “If Dad and Mom hear you, you’re in trouble,” she said. “You know how parents are. They think people should sleep at night and solve mysteries during the day.” She turned to go back to her room.

Dexter turned to Jay and Cindy. “She’s right about our folks getting mad if they hear us,” he whispered. “Let’s keep it quiet. I’ll take first watch. You two get some sleep.”

Dexter nodded. He sat on the radiator cover, his sleeping bag wrapped around him. His face was cold leaning against the window, but the rest of him was warm from the radiator. He pulled his glasses down on his nose and stared out into the night.

The Floating Island by Elizabeth Haydon
The River Midnight by Lilian Nattel
And Then You Dye by Monica Ferris
The Alaskan Adventure by Franklin W. Dixon
Over Troubled Water: A Hunter Jones Mystery by Charlotte Moore
Need You for Mine (Heroes of St. Helena) by Marina Adair
Inn & Out (A Romantic Comedy) (Five More Wishes Book 2) by Elise Sax
Cradle Of Secrets by Lisa Mondello
Murder on the Cliffs by Joanna Challis
The Trouble With Cowboys by Melissa Cutler
Our partner