Mystery of the Wild Ponies 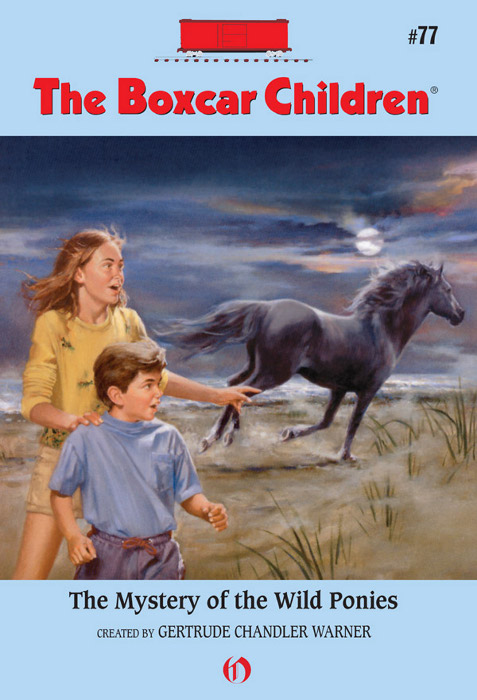 Chapter 1. A Vacation from Mysteries?

Chapter 6. A Stranger at the Clambake

CHAPTER 1
A Vacation from Mysteries?

“Look at the water!” Benny Alden exclaimed happily as Grandfather drove the station wagon over the bridge. Below, blue-green water sparkled in the bright sunlight.

Ten-year-old Violet was excited, too. “Are we at the Outer Banks yet?”

“Not yet,” said their grandfather, James Alden.

Fourteen-year-old Henry, who had been guiding Grandfather with a map, spoke to his little sister from the front seat. “Just over this long bridge, Violet, and we’re there.”

As they drove off the bridge and onto land again, Jessie Alden cheered, “Here we are!” Like the others in the family, she was looking forward to a vacation on an island off the coast of North Carolina.

At twelve, Jessie kept the Aldens organized on their many trips. Yesterday they left their home in Greenfield, Connecticut. They waved good-bye to their housekeeper, Mrs. McGregor, and to Watch, their dog, and began the long drive south.

Now they were on one of the islands that together are known as the Outer Banks. The two-lane road wound between thick bushes. Beyond the bushes the children caught glimpses of cozy houses.

Benny bounced in his seat. “I can’t see the ocean, but I can smell it.”

She breathed in the salty air. Benny was right. You could smell the ocean! Her brother was only six years old, but he was pretty smart.

Grandfather steered the station wagon into a crushed-oyster-shell parking lot and parked in front of a small building. OCEAN TIDES REALTY, read a bright sign above the door.

Benny leaned out the car window. Across the road was an ice-cream stand. “I wonder if they have fudge ripple,” he said hopefully.

“Are you hungry already?” Jessie asked him. “We had a huge lunch in Elizabeth City.”

“But that was
hours
ago,” Benny said.

Just then Grandfather appeared with keys dangling from a wooden cut-out gull. He saw Benny staring at the ice-cream stand and everyone laughing.

“Yes!” said Violet, Henry, and Jessie all at once.

James Alden shook his head. “Some things never change. Benny is always hungry. And you kids manage to solve a mystery on every trip we take.”

“We’re on vacation for a week,” said Grandfather. “Maybe we can take a vacation from mysteries, too.”

Jessie glanced out the window: just sand and sky and pretty houses. This was the most unmysterious place she had ever seen. Grandfather would surely get his wish.

The station wagon turned into a driveway.

Henry looked at the weathered gray two-story house. Some cottage! The house was big, with lots of windows, and upper and lower wraparound decks. And it was built on wooden pilings, which looked like stilts.

Grandfather pulled the car into a space under the house. “Welcome to Gullwing Cottage,” he said.

Benny hopped out of the car. “Cool!” he exclaimed. “It’s like a tree house, but without the tree!”

“Well, we lived in a boxcar once,” said Henry, “so this isn’t so strange.”

The Alden children never forgot the time they lived in an abandoned railway car. Their parents had died and they had no place to go until Grandfather found them and took them to his big house in Greenfield. He even had the boxcar towed to their backyard so they could play in it.

“The houses here are built on pilings because of hurricanes and big storms,” explained Grandfather. “Basements would flood. The houses are built up so high water flows underneath.”

“I hope we don’t have a hurricane this week,” Jessie said, hauling luggage from the trunk.

“The weather report says we should have clear skies,” said Violet. She picked up the backpack that contained her art supplies. She loved to draw and paint, and she hoped to make lots of pictures while she was here.

Jessie and Violet decided to share a large room with an ocean view. Henry and Benny claimed the room next door because it had two sets of bunk beds. They could each sleep in the top bunk. Grandfather chose a sunny room with a view of the Sound.

“Thank goodness we have a kitchen,” Benny said, eagerly opening the refrigerator. His face fell when he saw it was empty.

Jessie laughed. “We have to go to the grocery store, Benny. We’ll buy lots of things you like to eat!”

But before they got in the car again, Grandfather suggested everyone relax a few moments.

The children went out on the upper deck, where they could see all the way to the bright blue ocean.

“There’s the dune.” Henry pointed to a steep hill of sand that sloped on its far side down to the Atlantic. On the beach, a boy flew a blue-and-yellow kite. Two surfers braved the tumbling waves.

“That looks like fun,” said Henry. He hoped to try surfing while he was here.

Gullwing Cottage was flanked by other houses. Bright beach towels were draped over the deck rail of the three-story house on one side. A narrow boardwalk, like a sidewalk, connected the houses.

A sandy-haired boy stepped outside of the brown-shingled house on the other side. When he saw the Aldens, he waved. Even from a distance the Aldens could tell he was a lot older than Henry.

They went back inside and told Grandfather they would be next door meeting their neighbor.

The older boy was waiting for them on the boardwalk between the two houses. The boardwalk also crossed over the dune.

“Pleased to meet you,” said Henry. He introduced his brother and sisters. “Are you here with your family?”

Jeremy shook his head. “My roommates and I are students at the University of North Carolina.”

Violet thought Jeremy was cute, with his blue eyes and deep dimples. Shyly she asked, “What are you studying?”

“You mean what is my major?” Jeremy’s eyes danced. “According to my roommates, Paul and Drew, I’m majoring in practical jokes!”

Benny was delighted. “You can take that in school?”

Jeremy playfully rumpled Benny’s hair. “Not officially. But I’ve pulled some good stunts. This morning I woke up Drew with a large bucket of water!”

Jessie didn’t think that was so funny, but she couldn’t help liking Jeremy. She loved his southern accent.

Jeremy noticed that Benny was dreamily watching the blue-and-yellow kite bob overhead. “Do you like to fly kites?” he asked Benny.

“I’m a kite flier from way back,” Jeremy replied. “Maybe we’ll fly some kites together.”

“Thanks, but we’ve got to go,” Jessie told Jeremy. “We just arrived and we need to get some stuff at the store.”

As they left, they saw a dark-haired woman standing on the deck of the three-story house. She squinted at them from beneath the brim of a straw hat.

Before anyone could stop him, Benny scampered across the sandy yard to the top of the flight of steps leading up to the woman’s deck.

An easel was set up by the sliding glass door. The woman was carrying a canvas under one arm. She struggled to pick up a large tackle box with the other hand.

Benny bounded up the steps to her. “Can I help?” he asked.

“Who are you?” demanded the woman. Under the hat brim, her dark eyes glinted with suspicion.

“I’m Benny Alden,” he answered. “We live next door. Are you an artist, too? My sister is an artist.” 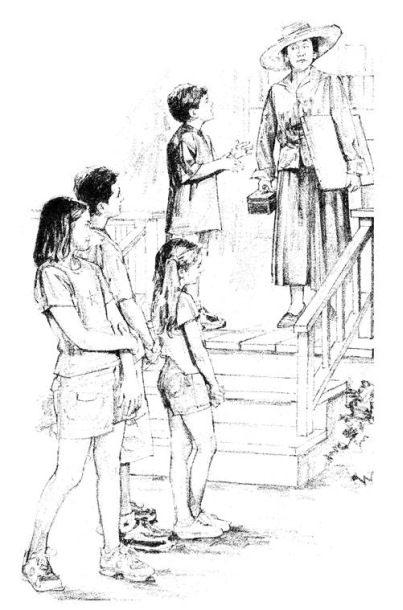 “I don’t have time to chat, little boy. I’m losing my best light,” said the woman.

Henry was right behind Benny.

“Is this your brother?” the woman asked him, clearly annoyed.

“I’m sorry,” Henry apologized. “Benny’s only six years old and I guess being at the beach has him all excited.”

Jessie and Violet joined Henry. When Violet saw the art supplies, her heart skipped a beat. A real artist was staying right next door!

After Henry introduced them, the woman reluctantly told them her name was Winifred Gorman.

“Do you paint with oils or watercolors?” asked Violet with interest.

“Both. When I still have proper light. If you kids don’t mind, I really must go,” Winifred said.

“We’ll help carry your things down to the beach, if that’s where you’re going,” Benny offered.

“I’m just going up on the dune. I can handle it myself,” Winifred said brusquely. “I always have.”

As the Aldens turned to leave, she leaned over the rail.

“When did you get here?” she asked sharply.

Jessie turned back to reply. “A little while ago. Why?”

“Somebody stole one of my beach towels last night.” Winifred frowned at them. “I guess it couldn’t have been any of you.”

When they were inside Gullwing Cottage again, Jessie said, “I can’t believe it! She practically accused us of stealing!”

“She wasn’t very nice,” Violet agreed, disappointed. She hoped to make friends with the artist next door. But Winifred Gorman didn’t seem the friendly type.

Jessie put her hands on her hips. “It probably blew away in the wind. We’re not looking for any mysteries, remember?”

Henry said, gazing out the window. “This seems like the quietest place we’ve ever been.”

“Good,” said James Alden, coming into the room. “I hope it stays that way!”

“Are we going to the grocery store now?” Violet wanted to know.

“I did some checking,” said Grandfather. “The closest grocery store is in Corolla, several miles up the road. But there’s a small market close by. I’ll drive over now and get a few things there for breakfast. You children can stay and settle in. Tomorrow we’ll all do our main shopping.”

“What about supper?” Benny asked, hungry as always.

But Benny was too hungry to wait for dinner. As soon as Grandfather came back with the groceries, he fixed his favorite sandwich—peanut butter, banana, and mayonnaise on white bread. He carried the snack outside on the lower deck, then realized he’d forgotten his drink.

When Benny returned with a can of soda, his sandwich was gone!

The other children came running.

Benny pointed to the railing where he had left the paper plate. “I set my sandwich right there and went inside to get a drink. When I came back, it was gone!”

Jessie walked down the ramp. “Here’s the plate,” she reported.

Henry had been scanning the blue sky. “You know what I think?” he said. “I think those gulls took your sandwich, Benny.”

Benny was amazed. “Birds flew off with a whole sandwich?”

“Seagulls are scavengers,” Henry added. “They eat garbage, fish—just about anything. Your sandwich was probably a real treat.”

“I sure hope they enjoyed it,” Benny said.

The others went back inside. Benny started to follow, but then he thought of something. He walked down the ramp and checked where the paper plate had fallen. There were wide, deep marks in the sand. If seagulls took his sandwich, they wouldn’t have left tracks like those!

Something a lot bigger than a bird had stolen his sandwich, Benny was sure.

Circle Game by Margaret Atwood
Murder.com by Christopher Berry-Dee, Steven Morris
King Tomb (Forever Evermore) by Scarlett Dawn
To Bed A Montana Man (Montana Men) by Waters, KyAnn
At the Scene of the Crime by Dana Stabenow
The Touch of Bliss — A Sensual Reckoning (Muse of Shadow) by Alba, Caelyn
Watch Over Me: A Military Romance (Uncharted SEALs Book 1) by Delilah Devlin
Waylaid by Kim Harrison
More Than Forever (Providence Series Book 2) by Moore,Mary B
Omega Night (Wearing the Cape) by Harmon, Marion G.
Our partner