NAKED Cheerleader and other Stories 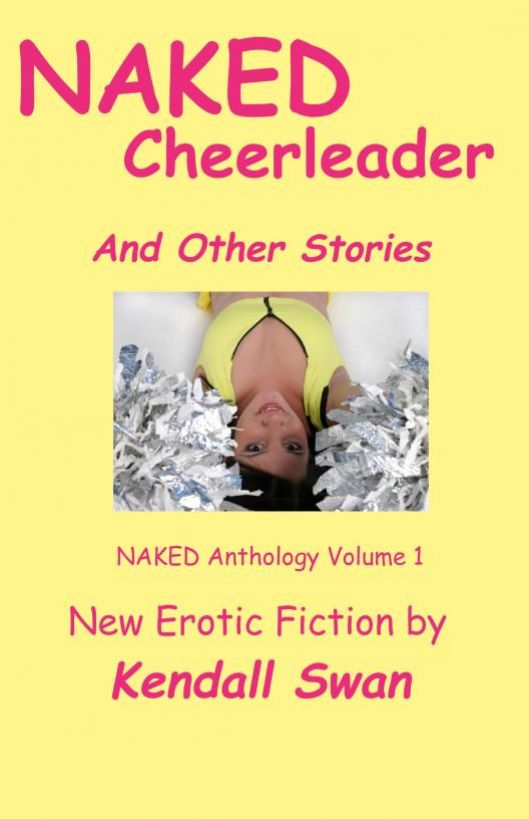 The Sexual Memoir of Emma #1: A Whole New
World

NAKED Cheerleader And Other Stories

This book is a work of fiction. All names,
characters, locations, and incidents are products of the author’s
imagination, or have been used fictionally. Any resemblance to
actual persons living or dead, locales, or events is entirely
coincidental.

This ebook is licensed for your personal
enjoyment only. This ebook may not be re-sold or given away to
other people. If you would like to share this book with another
person, please purchase an additional copy for each person you
share it with. If you're reading this and did not purchase it, or
it was not purchased for your use only, then you should return to
Smashwords.com and purchase your own copy. Thank you for respecting
the hard work of this author.

No portion of this book may be transmitted or
reproduced in any form, or by any means, without permission in
writing from the publisher, with the exception of brief excerpts
used for the purposes of review.

Jordan was sweaty from practice. It was raining
outside causing practice to be moved to the large hallway by the
office. It was the only hallway big enough for the whole squad.
They usually practiced in the gym on rain days but the girls
volleyball team had practice there today as they usually did twice
a week.

They couldn’t practice their jumps and there
wasn’t enough ventilation but Jordan still liked the hallway. It
allowed students, teachers, and the staff from the office to get up
close and personal with them. They would walk by as the team was
stretching and doing the splitz or showing off their obviously sexy
cheer moves. The girls were usually more scantily clad during
practice wearing only sports bras and short tight spandex
shorts.

Jordan could feel their eyes wander to her
crotch as she stretched or to her breasts or ass if she bent over.
What was funny was how the staff from the office such as the
principal and vice principals, all men, would linger the
longest.

It seemed they all had very important things to
say to Ms. Hayden, the girls’ coach. Of course, they never kept eye
contact with her for very long while chatting. And the roll of her
eyes and harsh attitude she had after they left told us she wasn’t
very fond of their mental fondling.

She would spread her legs even further and
further apart when they showed up. A girl has to stretch to stay
limber, right?

She would look intently at whichever middle
aged man was checking her out. They always seemed to love
that.

This went on for weeks because of an
unseasonably rainy fall during Jordan’s senior year. The team was
stuck practicing in the office hallway every other
session.

The girls had just finished up for the day, or
rather, night. It was close to seven in the evening. Jordan had to
run to the restroom and when she came back all of the girls were
gone as well as Ms. Hayden.

She finished putting her practice poms in her
bag and took a big chug of her sports drink. She was walking passed
the office towards the parking lot when Mr. Rainey stepped out of
the office with his coat on and briefcase at his side.

“Jordan. How are you?” he exclaimed
excitedly.

His attention immediately made Jordan blush.
Mr. Rainey had been helpful to Jordan’s academic career by
recommending her for the honors courses in both English and Math.
Jordan wasn’t sure if it was lust or altruism or a combination of
the two that made him want to help her so much. But she was
grateful. Her parents were so impressed she’d been moved
up.

She remembered the first time he called her to
his office to talk about it. She thought she was in trouble. She
was being called to the vice principal’s office, after
all.

He was very quick to reassure her and came
around to rub her shoulders. She was confused by this at first but
then relaxed and enjoyed it.

He was into her. Why was that a surprise? She
was young and hot and about to be legal. Jordan had checked him out
as he returned to his desk chair to discuss her classes. He seemed
really fit—no belly like most of the adults in the school. And he
only had a hint of gray hair around his temples.

He must be about forty she had thought at the
time. She later found out that he was only thirty seven.

“How are your new classes working out? Doing
okay?” he asked as he placed his briefcase on the floor inside the
office.

“Great. It’s hard but more interesting. Thanks
for all of your help. The classes will really help with my GPA and
college,” Jordan said.

Mr. Rainey put his arm around her shoulder. His
touch was gentle and his fingertips were soft. He pulled her to
face him.

“Jordan. You have so much… potential.” His eyes
were staring deep into hers as he spoke with
earnestness.

“I just don’t want to see that go to waste. Why
don’t you come to my office and we can… discuss your future,” he
said.

Jordan was momentarily freaked out. She had
been fantasizing about seducing an older man for a couple of years,
but she hadn’t figured it would be a vice principal from her
school. Slowly, the fantasy took hold in her mind with Mr. Rainey’s
face and body instead of a nameless man. She felt her body heat up
at the thought.

He gently slid his hand down her arm and
clasped her hand. He led her back to his office. The other offices
and cubicles were empty because of the late hour.

Jordan’s heart was beating harder. She felt
excitement and adrenaline rush through her veins. Her breasts
became sensitive and they suddenly felt entirely too squished in
inside her sports bra. What would he do to her? What could she do
to him?

Her pussy grew wet with anticipation. This was
really happening, wasn’t it? She couldn’t believe it. She suddenly
felt like the athletic, full-figured woman she was in body if not
yet in mind.

They were almost to his office and as he
rounded the corner still holding her hand she glanced down and
could see cock bulging out against his slacks. He must wear boxers,
she thought.

The thought of him taking her on his desk
excited her. She felt her pussy muscles clench in anticipation and
a giddy smile crept across her face.

They reached his office and he pulled her in,
shut the door, and shed his coat. They faced each other and he put
both hands on her shoulders.

“Jordan, you are such an amazing girl. Woman,
really. Different from everyone else. I have to tell you, so you
finally know. I’ve wanted you for so long. Your body…oh
god.”

His hands slid down both her arms and rested
them on her hips.

He continued, “I don’t know how you feel and I
don’t want to push you into anything you don’t want to do. But if
you want to explore this, we should do it now.”

“Mark.” Jordan pushed her body up against his
so that her breasts in her tight sports bra were pressed up against
his chest. He only stood a few inches above her. His hands brought
her hips up against his crotch and she could feel his hard cock
through his slacks rub against her belly.

She brought her arms up and wrapped them around
his head. Then she tilted her head and went in for a kiss. His soft
lips embraced her mouth as his wet tongue plunged inside. Their
bodies were wrapped around each other.

Jordan could feel her pussy pulsing. She
couldn’t wait much longer. She wanted to be fucked, hard. She was a
hormonal teenager, after all.

She pulled away and stepped towards his desk.
She pulled her shorts and panties down in one movement revealing
her small, dark brown thatch of hair above her clit. She then
pulled her sports bra above her head letting her pert c-cup breasts
with tiny, pale pink nipples flow free.

Mark stood staring at her body lovingly. His
hands gently reached up and cupped her breasts. He bent down and
sucked one perfect nipple, swirling his tongue around it
gently.

Jordan inhaled sharply. She had never felt that
sensation before. She wasn’t a virgin—she had done it twice and had
played with herself countless times. But she had never experienced
pleasure through just her nipple before. This night really is about
education, she thought.

Marks hands slid down her body slowing slightly
to grip her waist then down to her hips. He pushed her back and
propped her naked body up on the edge of his desk. Jordan could
feel cool papers and file folders touching the skin of her
ass.

He knelt down and spread her legs forcefully.
Then he began massaging her clit softly with his thumb. Jordan
moaned and ran her fingers through his hair.

Mark’s hot lips and tongue touched her outer
pussy lips and Jordan felt her entire body come alive. It was as if
his tongue was a secret key needed to unlock all of her senses at
once.

He lapped at her and pierced his tongue inside
her lips, tasting her sweet, hot juices. She leaned back on his
desk, completely taken in by yet another new sensation. She had
never been eaten out before and she loved it. This will be a
requirement for all guys, she thought.

He plunged two fingers in her entrance while
whipping her clit with his tongue. She moaned helplessly. He pulled
and pushed his fingers in and out of her while going to town on her
clit. His thumb would graze her rosebud every time he went in.
Jordan would nervously clench shut each time, squeezing his fingers
tight.

Jordan had her eyes shut but she could hear him
undoing his buckle and pants. She was losing control. Her arms were
flailing all around his desk sending papers flying.

“God you taste good,” he whispered. Jordan
could barely hear him over her own moans. Then all of a sudden she
was gripped, her whole body seizing as he licked and pumped with
his hand, pushing harder and harder. Jordan came like she never had
before. Her scream was loud and animal like. Her pussy lips writhed
and clenched his fingers as the waves of pleasure past through her
pristine body.

Mark slowed his pumping and pulled his face
back from her crotch. He wiped is mouth with his sleeve. His other
hand was still moving up and down and Jordan notice he was jacking
himself off. He stood up. He had a condom in his hand and slipped
it on.

She sat up and put both hands around his hard
cock. It was longer than she expected. Mark leaned in and kissed
her deep. They kissed passionately and Jordan had to put one hand
around his neck to keep from falling back. She was pumping his cock
while they were kissing. He put a hand over hers and they pumped it
together. She felt the fingers from his other hand snake their way
from the base of her scalp through her hair. He gripped firmly and
kissed her even harder, their tongues dueling with
urgency.