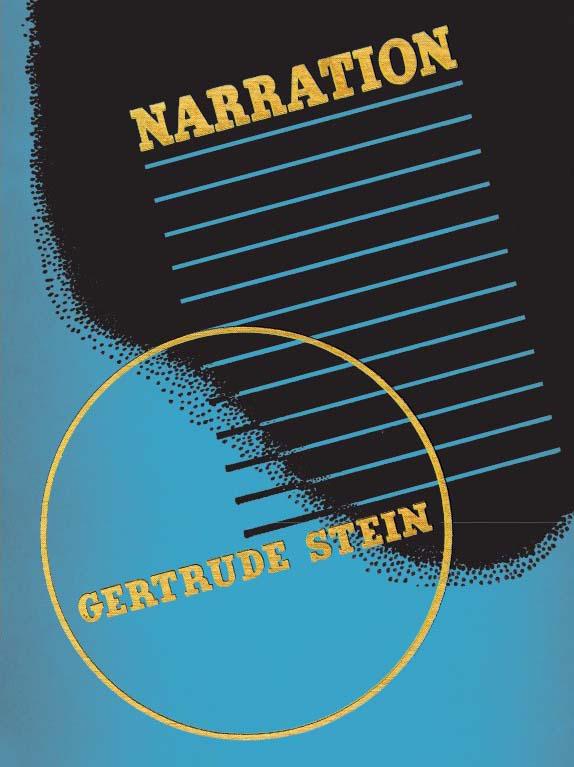 WITH AN INTRODUCTION BY

The University of Chicago Press, Chicago 60637

The University of Chicago Press, London

Copyright 1935 by The University of Chicago

Narration : four lectures / by Gertrude Stein ; with an introduction by Thornton Wilder.

Lectures delivered by Gertrude Stein in 1935 at the University of Chicago.

The paper used in this publication meets the minimum requirements of the American National Standard for Information Sciences—Permanence of Paper for Printed Library Materials, ANSI Z39.48-1992.

GERTRUDE STEIN
delivered her
Narration
lectures to packed halls at the University of Chicago in 1935. She was visiting the city as part of an American lecture tour that took her throughout the Northeast, the South, the Midwest, and California
1
at a time when her
Autobiography of Alice B. Toklas
, an account of life with Alice B. Toklas and their artistic salon in Paris, had just transformed her into a literary celebrity. Stein’s witty anecdotes about famous artists and writers like Picasso, Hemingway, and Gide had attracted scores of readers previously uninterested in her more experimental writing. She was, as her friend the photographer Carl Van Vechten warned her before she came to America, “on every tongue like Greta Garbo.”
2
Gertrude Stein’s name did indeed light up New York City marquees when she first arrived, and across the country, in every town and city, she was greeted by crowds.

Stein delivered her
Narration
lectures in the American city she and Toklas preferred above all the others: during these travels, they visited Chicago four times. In 1934, they attended the Chicago premiere of
Four Saints in Three Acts
, the opera Stein had written with Virgil Thomson. On their second stay, Stein spoke to both academic and nonacademic audiences all over the city. She drew huge crowds at her book signing at the fashionable Marshall Field’s Department Store: Fanny Butcher, the literary editor of the
Chicago Tribune
and a friend of Stein’s, described in her journal how the store was “so jammed that they wouldn’t even let us off the third floor…we nearly lost our lives getting to [Stein and Toklas].”
3
The Chicago newspapers—especially the society pages—
covered every aspect of Stein’s visits, from the dark plum-colored gown she wore to the opera to the compelling tenor of her voice when she lectured at the Arts Club.

Gertrude Stein’s reception in Chicago illustrates the surprising fact that she secured a popular audience long before she was read in the academy. Day after day, she was shepherded around Chicago by Butcher and various literary ladies: Alice Roullier, a patron of the arts who had traveled with Butcher to France in 1931 and met Stein and Toklas there; Maude Hutchins, aspiring novelist and wife of Robert Hutchins, then president of the University of Chicago; and Elizabeth Fuller Good speed—known as “Bobsy”—who cut a dashing figure in Chicago’s cultural life and arranged a splendid dinner for Stein and Toklas. These women adored Stein for her liberating humor, her gender bending, and the playfulness of her work. They saw this powerful woman at the center of the modernist movement in Paris as their access to the European avant-garde.

During her second visit to the city, Stein also met the Pulitzer Prize–winning writer Thornton Wilder, who would remain a lifelong friend. Wilder was then teaching at the University of Chicago; he advocated her work to his academic peers, some of whom were initially reluctant to welcome Stein to campus. She clashed, for example, with Mortimer Adler, architect of the university’s “great books” program.
4
Nonetheless, Robert Hutchins—probably recognizing her popular appeal and encouraged by his wife—asked Stein if she would come back later in her tour. So a few months later Stein and Toklas returned for nearly three weeks, staying in Wilder’s Hyde Park home in the Midway-Drexel Apartment Hotel at 6020 Drexel Avenue, while she wrote and delivered her
Narration
lectures and team-taught undergraduate seminars with Wilder.

Stein had not been back to the United States since she left for France in 1903, and her
Narration
lectures reflect on the changes in American culture apparent to her after thirty years abroad. The lectures also register the effect of fame upon Stein’s sense of herself. She initially welcomed the attention from the American press and public—to her mind, it had been a long time coming—but the last lecture also hints at the destabilizing effect that fame would have on her. (Stein experienced an unusual bout of writer’s block on returning to France.) Though these lectures expand on the themes of the talks Stein gave earlier and elsewhere (published as
Lectures in America
), they are unique in that Stein wrote them while she was here: fresh and inquisitive, the lectures overall pay tribute to the openness, energy, and mobility of American people and institutions.

Stein suggests that American writers—Henry James, for instance, one of her most important literary models—changed narrative structures in exciting ways to reflect new narrative forms in modern life. That is, Americans understood the fundamental openness of “a beginning and a middle and an ending.” As an example, Stein offers in the second lecture a description of how during the First World War, French people were interested “in seeing the American soldiers standing, standing and doing nothing standing for a long time not even talking but just standing and being watched by the whole French population.” A “modern” narrative need not have an event, according to Stein; nothing need
“happen.” On this point, Stein echoes James, who suggested much earlier in “The Art of Fiction” (1884) that an “incident” in a novel could be simply “for a woman to stand up with her hand resting on a table and look out at you in a certain way.”
5

But unlike Henry James, who, on returning to America in 1904 after twenty years abroad, was appalled by the “alien” influences eroding the English language, Stein found that the mobility and lack of convention in American life (the lack of a “daily island life”) fostered the most dynamic developments in twentieth-century art and literature. She emphasizes in her first lecture “how the pressure of the non daily life living of the American nation has forced the words to have a different feeling of moving.” Her openness to changes in the English language may have resulted from the circumstances of her own upbringing: she was born to German-Jewish immigrants and her family lived in Vienna and Paris during the very early years of her life. In her own experience, the English language had always been influenced by immigrant and foreign usages. Despite the fact that she very rarely wrote in French, her experimental play with language—“Steinese,” as the newspapers called it—reflects her polyglot upbringing and the cosmopolitan environment of her Paris salon. Suggesting that American English is naturally less tied to tradition than its British counterpart is, Stein connects her own purposely nonstandard English with the innovative spirit of the country that she was reencountering with such pleasure on her tour.

Although these lectures were originally published in 1935 without titles, Stein had provisional titles in mind that indicate that the final two lectures concern the subject of history.
6
She illustrates her idiosyncratic
conception of history in her description of American newspapers in the third lecture, and in her reflections on her status as a historical figure (an “orator”) in the last. Fundamentally, Stein questions how history is written—that is, how newspapers account for events, including no doubt the event of her own presence in America. “I said newspapers make things too easy,” she says in the third lecture. During her tour, she herself was asked to contribute six pieces to the
New York Herald Tribune
and other newspapers, in which she discussed aspects of American life (food, crime, and education are a few of her topics).
7
In these pieces she avoided the conventions of newspaper writing, which in her account made events in the past seem as if they were happening in the present, giving a false impression of narrative. Stein was attracted to the dynamic quality of many forms of the American language (including road signs, advertisements, conversation, and slang), but she thought newspapers did not register the most important experiences in human life, which “exist” rather than “happen.” (“Love” is the example she gives in her third lecture.) Stein’s prose style aims to embody “existing,” a sense of all things as present, unfinished, and immediate.

However, reading Gertrude Stein’s work—even her more straightforward lectures—is never an easy endeavor. One should keep in mind that her rejection of certain grammatical standards is a way of giving more autonomy to a reader. She was open to various interpretations apart from finding neat or right or even clearly articulated responses to them (one of the reasons that she disagreed with stricter versions of “how to read a book,” in Mortimer Adler’s terms).
8
As soon as Stein arrived in the United States, her editor at Random House encouraged her to
appear in a Pathé newsreel that was shown in movie theaters across the country. In this short film, she gave an overview of the lectures she would give, suggesting that her listeners would understand the lectures if they allowed themselves simply to enjoy the experience. “My lectures are to be a simple way to say that if you understand a thing you enjoy it and if you enjoy a thing you understand it,” she says in the film. “Understanding and enjoying is the same thing.”
9
It helps to read Stein’s lectures aloud, since she wrote them originally to be heard: The insistences of her verbal performance become more apparent, and the difficulty of her work gives way to an aural experience less tied to analytical meaning. Even when delivering these lectures to a university crowd, Gertrude Stein meant them to be provocative and playful, and most important, to give pleasure.

Now and Forever by Barbara Bretton
The Bodyguard by Joan Johnston
Lead the Way by Prince, K.L.
It Takes Two (Blindfold Club #0.5) by Nikki Sloane
Dragon's Blood by Brynn Paulin
Stand By Me by Blu, Cora
Complicit by Nicci French
Feast by Jeremiah Knight
Contact by A. F. N. Clarke
Dark Days (Apocalypse Z) by Manel Loureiro
Our partner