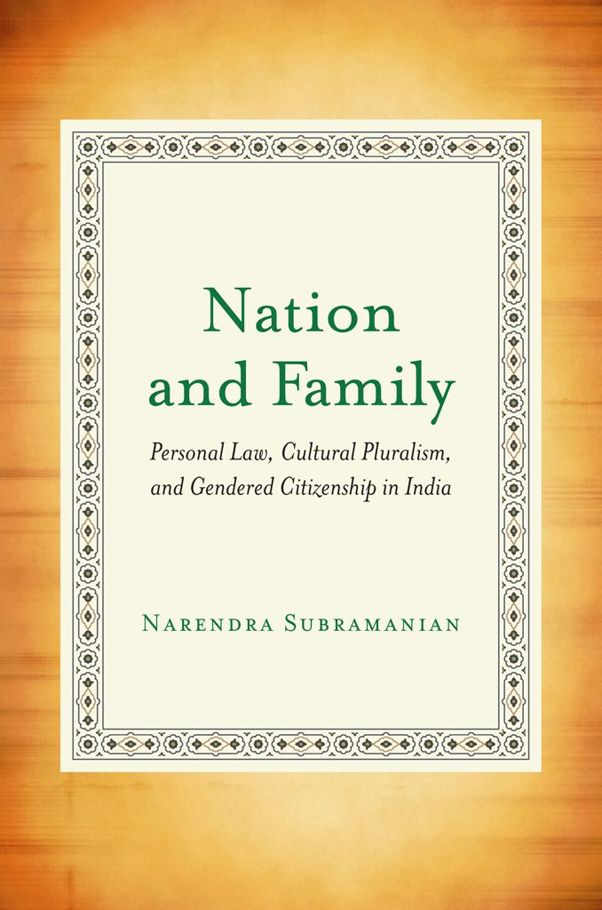 ©2014 by the Board of Trustees of the Leland Stanford Junior University.

No part of this book may be reproduced or transmitted in any form or by any means, electronic or mechanical, including photocopying and recording, or in any information storage or retrieval system without the prior written permission of Stanford University Press.

Printed in the United States of America on acid-free, archival-quality paper

Library of Congress Cataloging-in-Publication Data has been requested.

who initially drew my attention to family law

1.1. Nature of Change in Personal Law Soon After Independence/Regime Change

1.2. Effects of Changes in Personal Law Since the 1970s on Women’s Rights and Individual Autonomy

2.1. Influences on Multiculturalism and Personal Law

2.2. Features of Community Discourses and State-Society Relations That Influence One Another

My earlier research examined certain ways in which public actors sought to express cultural specificity and reduce socioeconomic inequality in India. While continuing to address these questions, this book explores some themes in much greater detail—especially the interactions of states, nationalisms, and legal institutions with gendered inequalities, and the interplay of religious discourses and secularist policy frames. This project took over a decade of research, reflection, and writing, in the course of which I accumulated many debts, intellectual, professional, and personal, not all of which I am in a position to mention here.

I made several research trips to India between 2000 and 2007, during which I gathered valuable documents at the Indian Law Institute Library, the Nehru Memorial Library, the Supreme Court Judges Library, the Centre for
Women’s Development Studies Library, the Census of India Library, the offices of the Census Commissioner, the Joint Women’s Programme, the All India Democratic Women’s Association, the All India Muslim Personal Law Board, the Young Women’s Christian Association, the Church of North India, the Lawyers Collective, and the Human Rights Law Network in Delhi; the Darul Uloom Nadwatul Ulama and the Firangi Mahal in Lucknow; the Imarat-e-Shariah in Phulwari Sharif, Bihar; and the family court, the high court, the Tamil Nadu Legislative Assembly Library, and the All India Democratic Women’s Association’s office in Chennai. Moreover, I was able to access materials from the offices and personal collections of Rajeev Dhavan, Kirti Singh, Bina Agarwal, and Gargi Chakravartty in Delhi, and Justice K. Chandru, Sudha Ramalingam, V. Suresh, Geetha Ramaseshan, K. Shantakumari, Sheila Jayaprakash, P. V. S. Giridhar, and D. Sharifa in Chennai. This was supplemented by materials that I gathered at and through the McGill University libraries, the library of the School of Oriental and African Studies in London, and
Indlaw.com
.

Three senior scholars encouraged me to embark on this project at an early stage—Stanley Tambiah, the late Myron Weiner and Marc Galanter. I am grateful for the comments of various scholars on parts of the manuscript or on papers or presentations that discussed aspects of this project. They included two reviewers for Stanford University Press. as well as the reviewers of articles based on the project published in
Law and Social Inquiry, The Journal of Asian Studies
, and two edited volumes. Of the reviewers of the book manuscript, Yüksel Sezgin read the penultimate draft and later let me know that he had been a manuscript referee. The other reviewer read an earlier draft of all chapters except the Conclusion. Alfred Stepan commented on the drafts of various chapters as well as on my presentation at a workshop to which he invited me at Columbia University, and encouraged me to elaborate on certain ideas. Werner Menski and Sylvia Vatuk offered me valuable suggestions in response to a number of papers, as well as conference and seminar presentations.

Many colleagues provided me the opportunity to present my work on this project at academic and public venues, through which I gained much valuable feedback. Gerald Larson invited me to a workshop at the University of Indiana at Bloomington, Rajeev Bhargava organized a talk at Jawaharlal Nehru University, and Ashok Kotwal at the University of British Columbia. K. Sivaramakrishnan invited me to present aspects of this project twice, initially at Stanford University at a conference he organized with Akhil Gupta, and then at Yale University at a workshop that he put together with Gilles Tarabout and Daniela Berti. Along with conferring on me the honor of delivering one of the annual Neelan Tiruchelvam Memorial Lectures at Colombo, Tambirajah Ponnuthurai, Sithie Tiruchelvam and Radhika Coomaraswamy had me present my work at the International Centre for Ethnic Studies there. Besides, Tuli Banerjee arranged a talk at MIT, Martha Bailey at Queen’s University, Gary Jacobsohn and Gretchen Ritter at the University of Texas-Austin, Karine Bates at the Université de Montréal, Gérard Bouchard at Harvard University, John Bowen at the Institute for the Study of Muslim Civilizations–Aga Khan University, Mitra Sharafi at the University of Wisconsin-Madison, Alfred Stepan and Jean Cohen at Columbia University, and Priya Darshini Swamy at Leiden University College The Hague. In addition, I benefited from presenting aspects of my work on the project at three of the annual conferences on South Asia at Madison, Wisconsin, and at annual meetings of the Association for Asian Studies, the Law and Society Association, the American Sociological Association, and the Association for the Study of Nationalities.

Essential Stories by V.S. Pritchett
Night Games by Crystal Jordan
The Calling by Robert Swartwood
The Clue of the Screeching Owl by Franklin W. Dixon
Voyage in Time: The Titanic (Out of Time #9) by Martin, Monique
Murray Leinster by The Best of Murray Leinster (1976)
The Camel Club by David Baldacci
Hare Moon by Carrie Ryan
Pirate Ambush by Max Chase
A Right Brain Mind in a Left Brain World by Jean Long
Our partner