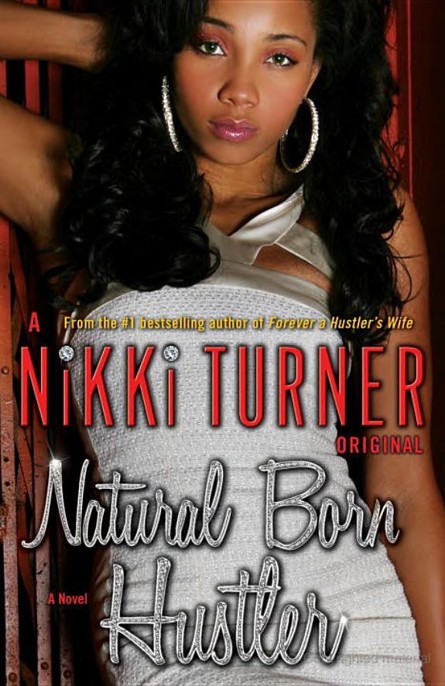 “Always surprising, Nikki Turner’s prose moves like a Porsche, switching gears from tender to vicious in an instant.”

“Nikki Turner has once again taken street literature to the next level, further proving that she is indeed ‘The Queen of Hip-Hop Fiction.’ ”

“Another vivid slice of street life from Nikki Turner. You can’t go wrong with this page-turner!”

“Few writers working in the field today bring the drama quite as dramatically as Nikki Turner.… [She’s] a master at weaving juicy, ’hood-rich sagas of revenge, regret, and redemption.”

—Vibe.com on
Forever a Hustler’s Wife

—TERI WOODS, author of the
True to the Game
trilogy
on Riding Dirty on I-95

Natural Born Hustler
is a work of fiction. Names, characters, places, and incidents are the products of the author’s imagination or are used fictitiously. Any resemblance to actual events, locales, or persons, living or dead, is entirely coincidental.

A One World Trade Paperback Original

Excerpt from Heartbreak of a Hustler’s Wife copyright © 2011 by Nikki Turner.

Published in the United States by One World Books, an imprint of The Random House Publishing Group, a division of Random House, Inc., New York.

ONE WORLD is a registered trademark and the One World colophon is a trademark of Random House, Inc.

This book is dedicated to my auntie,
very best friend, and sister,
Yvonne Murray-Lewis.
You are such a phenomenal woman
with so many talents.
I treasure you for all the secrets
you hold, laughs we share,
the words of wisdom and inspiration
you give—they go such a long way
.

And
to all the natural born hustlers on
planet Earth: You know who you are—
whether you want to admit it or not
.

A Special Message from Nikki Turner to Her Readers

Chapter 11 - The Showdown at Sunup

Excerpt from
Heartbreak of a Hustler’s Wife

A Special Message from Nikki Turner to Her Readers

When my publisher suggested that I pen a third addition to the epic Hustler’s Wife series, I was delighted by the idea, but I knew it wouldn’t be easy. This new novel would have to walk in the footsteps of two hugely successful predecessors—
A Hustler’s Wife
and
Forever a Hustler’s Wife
. The original characters, Yarni and Des, are both well into their thirties, a bit too mature to be running around doing some of the crazy stuff that I usually like to write about!

Nevertheless I accepted the task and in the process I created this amazing, multi-dimensional, and complex teenage female character, Desember. She was a fatherless child who had so much heart and spunk that her persona began to dominate the project. It quickly became obvious to me that Desember needed her own book. As a reader (because I feel I’m a
reader first), I felt we needed to delve deeper into her past and background and care more about her before she made her debut in the third installment of
A Hustler’s Wife
. And I knew just how to pitch it to the people that could get Desember’s story on the shelves and into your hands.

When I called my agent, Marc, and shared my newest bright idea with him about a novel that would serve as a bridge between the second and third novel in the series, he was excited about the vision. (He keeps calling the book Hustler’s Wife 2½, which is why we don’t let Marc come up with the titles.)

Now all we had to do was to sell the idea to my longtime editor and friend, Melody, at One World/Ballantine. At first Melody thought it was an okay idea. After she read the outline she began to like the idea a little more; the story was becoming contagious. And before the entire journey had run its course, Melody, like me, had fallen in love with Desember.

Once my publisher and agent got the behind-the-scenes business done, I found out that
Natural Born Hustler
would be a fall release—my first ever. Up until now, all of my novels have been published in the summer. I can’t begin to count the letters and emails I’ve received from you, my readers, expressing how hard it is to wait an entire year between novels, so I knew that you would love this.

But wait, I still needed to write the book. It was no joke, I was under the gun in the worst way, but I loved every minute of it. Maybe it was because Desember’s spunk reminded me so much of myself (many, many years ago). Growing up, I was also estranged from my father, and I’d always longed to know him and for him to know the real me. Ironically after I had finished writing this book, my father called me and apologized for the years apart and vowed to do all he could to build a better bond.
I had a great male role model in my grandfather, who, along with my grandmother, raised me. He was the absolute best and did a phenomenal job with me, but there is nothing like the bond between a father and a daughter. I’m eager to see how our relationship develops.

Sorry for my digression. I didn’t mean to get so personal but if I can’t share this with you, my loyal readers, then who can I? Anyway, there were times in this book when I would stop and laugh and read aloud, and on a few occasions I would even speak out loud to the characters. This was unusual because my characters speak to me all the time, but it’s rare I find myself reversing the roles.

I had too much fun writing this book. I know it was supposed to be a treat for you but it was a real delight for me! Desember is one of the most unforgettable female protagonists that I’ve created since the infamous Yarni of
A Hustler’s Wife
. And I’m willing to bet the farm that once you read her story and get to know her, you will love her too!

Desember Day fumbled for the key to her mother’s house and upon entering, she heard her mother and stepfather in the midst of an argument, which wasn’t unusual these days.

“Why do you have to come in the house drunk every single freaking weekend, Joe?” Angie screamed at her new husband of one year. Her anger surprised Desember, since her mother was such a mild-mannered, go-with-the-flow type. Angie rarely lost her temper, except with Desember from time to time, but generally she was a pushover. Desember lingered a little longer in the shadows of the foyer, concealing her presence as she listened and smiled, proud as her mother took a stand.

“Because,” his voice was slightly slurred from the seven double shots of Grey Goose he’d taken to the head earlier, “ain’t nothing new. Don’t act like you didn’t know that I drank every
weekend and that I have been doing this long before I met you or married you.” He took another shot of liquor, shook his head and added, “And why drink if you don’t plan to get drunk?”

Desember’s latest stepfather, Joe Livingston, owned a very successful construction business and enjoyed getting bent with his workers on the weekend. It made him feel like one of the guys, even though he was the boss. Joe was usually a nice, kindhearted guy, but liquor would transform him into a monster and make him say horrible things to the people he loved and sometimes cause him to become violent.

Desember never saw him hit her mother, but over the past two weeks, she’d sometimes come home to a broken table, or her mother sweeping up shattered pieces of glass from the floor, or one of Joe’s workers fixing something around the house as a result of the aftermath of Joe’s weekend extracurricular activities.

“Listen to yourself. Do you hear what you are saying? You seem so ridiculous.” Angie could smell the alcohol seeping from her husband’s pores. She sniffed loudly. “You’re no different from Ned the wino that sleeps by the train tracks, except you got a job.” Then she added, “For now anyway.”

Desember smiled, proud of her mother’s comeback, until she heard a noise that sounded like a firecracker exploding, startling the hell out of her.

Angie fell to the sofa, clutching the side of her fair-skinned face, which now bore a red mark from Joe slapping the cowboy shit out of her. Desember dropped her bag and soda on the table and stepped out into the open.

Joe looked at Desember with malice. The two locked eyes. It was no secret that neither of them liked the other. Desember would have sent his ass packing long ago if she could, but it
wasn’t her decision. This was one of the main reasons that when her boyfriend, Fame, asked her to move in with him, she couldn’t move her things out of the house fast enough. But since their breakup two weeks ago, she was back at home living in the man’s house and hated that she had to be there under his roof abiding by his rules.

The feeling was mutual. From the first time Joe had met the girl he thought she had too much mouth, and was too outspoken for any eighteen-year-old girl or for any female, for that matter. He preferred his women to be more passive and submissive, like Angie.

“W-w-whad,” he stumbled over the word as he took a sip from an open bottle of Heineken that was sitting on the table. “Whad the fuck do you-uughh …”

He was interrupted by a swift and painful knee to the groin, which caused the Heineken bottle to slip out of his hand. Before he could recover, a shiny switchblade jumped out of its handle and settled at the crook of his neck.

Desember spoke slowly and clearly, leaving no room for any misunderstanding: “If you ever put your dick beaters on my mother again, I’ll kill you.” Her eyes never left his. “This is your first and last warning, you bitch-ass nigga.”

Running With the Devil by Lorelei James
The Hotel 2 (The Billionaire Seduction) by Darling, Lola
Los bandidos de Internet by Michael Coleman
Rio Loco by Robert J. Conley
The Adventure of a Lifetime by Ravina Thakkar
Shades of the Wind by Charlotte Boyett-Compo
Captured by Julia Rachel Barrett
Raw Medicine (A Medical Romance Short Story) by Hawkes, Elizabeth
My Sunshine by Catherine Anderson
To Crush the Moon by Wil McCarthy
Our partner