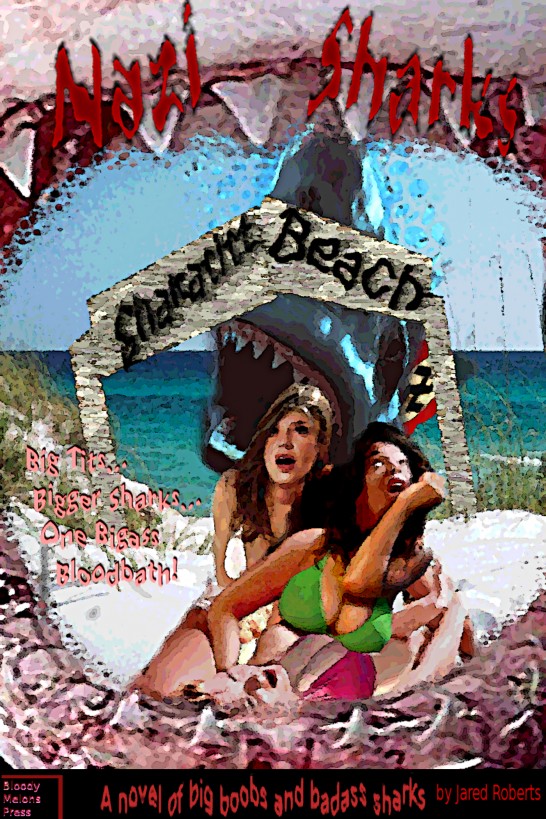 This ebook is licensed for your personal
enjoyment only. This ebook may not be re-sold

or given away to other people. If you would
like to share this book with another person,

please purchase an additional copy for each
recipient. If you’re reading this book and did

not purchase it, or it was not purchased for
your use only, then please return to your

favorite ebook retailer and purchase your own
copy. Thank you for respecting the hard

work of this author.

Swim to Your Favorite
Chapter
(We won’t question your
motives)

Chapter 10 – Of
Bimbos and Perverts

Chapter 17 – Even
More Excerpts from Researchmeister Sigmund Sigersbaum’s Diary, a
Glimpse into the Mind of a Misunderstood Man

Chapter 19 – The
Sheriff Refuses to Develop as a Character

and There Are Amusing
Pop Culture References

Chapter 29 – The
Final Excerpt from Researchmeister Sigmund Sigersbaum’s Diary, Just
in Time to Explain How to Kill the Sharks

“Did you peek?” Jonathan asked
his fellow sailor.

The fellow, whose name he
hadn’t bothered to learn yet, adjusted his blue neckerchief
ponderously. Clearly this was a man of depth. The sort of man whose
neckerchief needs adjusting before an answer can be given. Or
perhaps he merely itched. Jonathan wasn’t quick to judge, just
optimistic.

“Depends upon why you ask,” the
sailor answered. His neckerchief was not one of depth, Jonathan
realized, but of suspicion. He had probably killed a prostitute and
took to freelance sailing as an escape. Maybe in the wind and sea,
Jonathan thought, this man would find more than escape: maybe he’d
find his soul.

“Because I did,” Jonathan
stated frankly, a quality in himself he always admired, “and I
couldn’t believe what I was seeing. I heard rumors, y’know—my ears
aren’t this big for nothing—” and Jonathan touched his jug ears for
comic effect, lost on the nameless and tormented sailor, “that
these sharks are Nazi sharks. And I thought to myself, ‘Jonathan,
what in the name of the Virgin Mary’s love handles are Nazi sharks?
Do they march? Do they hate Jews more than any other edible thing
in the sea? That doesn’t make a lick of sense and you know it, so
finish up this delicious French onion soup and just do your duty.’
I said all that, but then I thought I’d take a look.”

“Well,” the man said
impatiently, his sailor suit suddenly seeming ill-fitting,
comically so. This man was neither deep nor a murderer of whores.
He could scarcely stay focused for a single paragraph of
conversation, how would he last a murder?

“They have armbands,” Jonathan
stated tersely.

“So you’re going to be
pedantic, too?” Jonathan asked. “Finbands, then.”

“I’m still not following you,”
the sailor answered, adjusting that itchy neckerchief again. If a
day were a failure for an itchy neckerchief, this man’s life
amounted to a seagull’s ballsack.

“Finbands with swastikas. Maybe
glued on. Maybe stitched. Maybe they’re tattoos. Heck, I didn’t
have time to do a full inspection—I said it was a peek and that’s
what it was. But I’m telling you the verdict: we’ve got real Nazi
sharks on board.”

The sailor took this
information soberly. His neck ceased itching and he gazed out into
the clear sky and its dark, blue lover, the ocean, as they met on
the horizon. Perhaps, beneath that incessantly itchy neck, the soul
of a philosopher lurked after all. Jonathan wasn’t sure, but he
studied the man and thought about it.

“It’s a beautiful day,” the man
suddenly observed. “Makes me remember why I became a sailor in the
first place.”

It was a banal observation, but
Jonathan felt more kinship with the sailor than he’d felt with
anyone in a while. He wasn’t going to complain.

“The air,” Jonathan agreed,
then realized he hadn’t finished the sentence.

“Carlos,” he stated, adjusting
his neckerchief. Jonathan doubted that was his name. The guy didn’t
look Hispanic. His fingers were almost bone white as they dug into
the sea-blue of the neckerchief.

Carlos resumed his scrutiny of
the horizon. Why bother? It hadn’t changed. Carlos irritated
Jonathan with his quirks. They suggested so much more than was
really there—and he’d just met the guy!

“You don’t think those sharks
can get out, do you?”

So that’s what was bugging the
guy. He was scared of sharks. Or Nazis. Or both. Heck, who can
blame him? Who knows what a Nazi would do with a shark? Or
vice-versa.

“You kidding me?” Jonathan
burst out with more enthusiasm and confidence than he’d really
intended. “How many feet of Navy tested and re-tested steel
comprises the multiple layers of the hull of this incredible
vessel? It would take a torpedo from the Devil’s asshole to give us
a mere dent, so what’s a flesh-and-blood shark gonna do? Hah! Get
out.”

Carlos accepted all of this
soberly. He really was a sober man. Even less reason to believe the
man Hispanic, Jonathan thought, but felt momentarily guilty
because, ‘I’m no racist.’

Jonathan gazed right back at
that horizon himself, because sometimes doing something together is
better than doing nothing at all. The ship is a metaphor for
society, Jonathan began pondering in his mind. Even the lingering
taste of French onion soup couldn’t interfere with his sudden
inspiration. Only the grinding teeth of a shark could— and did. The
section of steel deck that had been beneath the sailors now bent in
the shark’s titanium-reinforced jaws, creating a sandwich of sorts
around Jonathan. A taco, he imagined Carlos might think—if Carlos
really were Hispanic! Jonathan would never know for sure. The steel
pressed with enough force to crush Jonathan’s pelvis, squirting his
guts down the shark’s gullet and frothing out his own mouth
like—like a Jonathan smoothie! he acknowledged with detached
horror.

The horizon seemed to be
moving, but really it was him, arcing through the air in his
assailant’s hateful mouth. Irrationally, he feared the cold, ocean
water hitting his face, even as the multiple rows of teeth chomped
his torso mercilessly, shredding his lungs into a convenient human
mignon. Carlos’s head dropped across the horizon before Jonathan’s
gaze like as though it were a chocolate-covered apple, splashing
into the water just before his carrier shark did the same.

Jonathan was about to undergo
digestion, but, had he lived, he would’ve seen the remainder of the
Nazi sharks arcing in a fearsome gray streak from the breached
deck, their blood-red armbands—or finbands—flashing proudly the
swastika across the horizon and out into the ocean. There they
regrouped into an orderly, two-by-two formation. This rectangle of
cold-blooded evil made its way to the nearest available shore, that
little-known Delaware coastal town, Shakattit Beach.

The Nazi UFO Secret
had
not struck him as quite so egregiously ill-informed, having been
probed by both Germans and aliens in his time.
Hitler’s
Time-Traveling Androids
was a documentary he had never bothered
to watch, because it hadn’t been peer reviewed. But here he was,
Bartholomew Skinner, a PhD with both a full head of hair and an IQ
of 160, watching grainy footage of a formation of sharks supposedly
engineered by devilish Nazi scientists. To do what? Attack
Americans? Clip cigars? Make the fondue? Skinner had never known
the German people to be much concerned with sharks or aquatic life
of any form, unless one counts a stash of porn aboard a submarine.
And he’d never once known a shark to eat sauerkraut. QED, as far as
he was concerned.

“The head Nazi researcher for
the project, or Researchmeister,” James Brolin narrated,
“engineered the sharks on a genetic level to detect and destroy
so-called ‘polluted’ human blood. At their fin-tips a variety of
weapons. Teeth, lasers, even a metal exoskeleton capable of
withstanding…”

The good PhD kicked his dog in
the face then took to his letter desk to vent his fury by pen. He
furiously wrote the phoney behind the documentary, one John Maynard
Beans, of his displeasure. When Bartholomew Skinner watched the
History Channel, he wanted in-depth coverage of Alaskan pawn shops,
staged forays into deep-swamp bridal preparations, and, of course,
unwarranted doomsday speculations. He did not want completely
unresearched tripe about the Nazis masquerading as poorly
researched tripe about the Nazis.

“As a long-time and respected
historian of 20
th
century Germany, I would just like to
say regarding your recent documentary,
The Nazi’s Secret Shark
Research Unveiled
, that there is no such thing as Nazi sharks.
That’s stupid.

The documentary had gotten so
much attention from the invalids who are still forced to watch the
History Channel that Professor Skinner’s letter was readily picked
up as an op-ed. He felt he had settled the matter with his
Rousseauian wit. Not so. One morning, as he drank the thick coffee
he called ‘Arabic Mud’, which tasted not unlike an outhouse smells,
he was incensed to read an actual rebuttal.

“I appreciate you writing to me
and I am honored you have seen my documentary. I have considered
your letter, your credentials, and your reputation with great care
and would just like to say, in response, that it is you who are
stupid.

This time he took to his
keyboard to type out his fury, imagining each key one of Beans’s
teeth—small, yellow, and made in China.