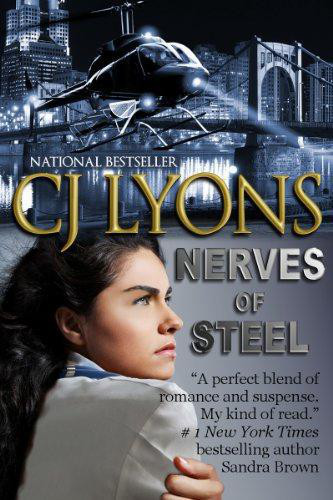 “Pulse-pounding suspense and hair-raising chills...a story of danger and intrigue that defies any reader to put it down.” ~
New York Times
bestselling author Susan Wiggs

“A page-turner of a story.
NERVES OF STEEL
is taut, gripping and nonstop. Don’t miss it!”~
New York Times
bestselling author Carla Neggers

“A pulse-pounding adrenalin rush!  Reminds me of ER back in the days of George Clooney and Julianna Margulies.” ~
New York Times
bestselling author Lisa Gardner

“Packed with adrenalin.  I can’t recall a hospital novel that so thrilled me.” ~
New York Times
bestselling author David Morrell

“CJ Lyons’ debut novel is simply exceptional.  The action never lets up…keeps you on the edge of your seat.”
~Roundtable Reviews

LIFELINES “explodes on the page…I absolutely could not put it down.” ~
Romance Readers’ Connection

Lyons “is a master within the genre.” ~
Pittsburgh Magazine

“This exhilarating medical thriller gets the blood pumping.” ~
The Mystery Gazette

“A powerful and dramatic look into the frenzied world of emergency medicine...Lyons’ characters are dynamic and genuine.  Readers need only shut their eyes to imagine this group on the big screen.”   ~
Suspense Magazine

“Sure to keep readers enthralled…a suspenseful and engaging tale that comes to an exciting conclusion.  Readers won’t want to miss this one.” ~
Romance Reviews Today

“This fast-paced, suspense-filled story will leave you breathless and begging for more.” ~
Romance Novel TV

“I did not want to put it down….An incredible way to spend a few hours!” ~5 Cups,
Coffee Time Romance

“A great fast-paced read….Not to be missed for fans of ER and Grey’s Anatomy.” ~4 ½ Stars,
Book Addict

“Riveting.” ~
Publishers Weekly Beyond Her Book

“
Smart and intriguing, and her character development is so incredible that she leaves me literally breathless waiting to see what will happen next.” ~
Becky Lejeune,
Bookbitch.com

This book is a work of fiction. Any references to historical

events, real people, or real locales are used fictitiously. Other

names, characters, places, and incidents are the product of the author’s imagination, and any resemblance to actual events or locales or persons, living or dead, is entirely coincidental.

All rights reserved, including the right of reproduction in

whole or in part in any form.

The Sikorsky helicopter thundered through the icy February night, its blades chopping against wind gusting off the Ohio River.  In the rear-facing passenger seat, Dr. Cassandra Hart swallowed hard to keep down the chilimac she'd eaten earlier.  Wishing it was only motion sickness, she tugged at her safety harness.  There was no room to breathe, not enough air.

Motion sickness she knew how to fix.  Irrational claustrophobia was another story.  A curse, a weakness she refused to reveal, forcing her to mask her panic.

The view outside Cassie's window wasn't helping.  The helicopter's blades tore into the low-hanging clouds, shredding them into tattered, ghostly remnants. Rain pelted the scarred Lexan windows, ricocheting like shrapnel.

Typical of Pittsburgh, a city constantly teetering on the edge of bankruptcy, few of the buildings they passed were lit.  The ones that were, such as the Cathedral of Learning and PPG Place, stood like sentries in the dark, guarding against a pre-dawn invasion.

She bit down against another wave of nausea, her pulse drumming through her ears in time with the rotor blades.  Across from her, Eddie Marcone, her flight paramedic, lounged in his seat, playing a hand-held computer game, oblivious to her distress and their impending doom.

A blast of wind catapulted the Sikorsky skyward.  Cassie's restraints tightened against the sudden motion, squeezing against her chest.  Gravity yanked them back down with a jolt strong enough to snap her jaws together.

"Weather's moving in fast," Zack Allan, their pilot, said, his voice reverberating through her headset.  "Might have to turn back, doc."

Turn back?  Cassie rubbed her clammy palms on the legs of her Nomex flight suit.  Right now the landing pad at Pittsburgh's Three Rivers Medical Center seemed like a distant Nirvana.   A Nirvana that would have to wait.  The patient they were flying to retrieve, a girl found in the frigid waters of the Ohio River, couldn't.

"Ten minutes," she told Zack, denying the fight or flight instinct raging through her, every muscle quivering with the desire to escape.  "We'll scoop and run, just give me ten minutes."

The Sikorsky bucked again. "They can send her by ground," Eddie said, his glare reminding her that her decision affected all of them, not only her patient.

"It'll take too long.  This girl doesn't have that kind of time."

That was the problem with living in a city built around three rivers and several mountains.  Tunnels, bridges and road work conspired against the rapid transport of trauma victims.

Zack's sigh resonated through her headset and she knew she'd won.  Hah.  If you could call being locked inside this flying death trap winning.

"You've got five minutes," he said.

They flew lower.  The turbulence decreased from head-swimming, stomach-flipping to mere filling-rattling. The Sikorsky shuddered then landed on the last intact slice of macadam remaining at the on-ramp of the West End Bridge.  Rotor wash overturned several orange PennDOT barrels, sending them skittering across the broken asphalt.  Sleet pounded the helicopter.  Cassie didn't need to look; she knew Zack was scowling.

"Hey, Hart," he shouted over the rumble of the engine, "one second late and I swear--"

Cassie ignored him as she wrenched the door open, stepped out into the night and moved away from the rotors, ducking her head until she cleared the blades.  Straightening, she turned into the westerly wind and stole a moment to breathe.

Her fear drained away, replaced with the adrenalin of anticipation.  A rescue squad sat at the entrance to the bridge, its lights aimed down the embankment that led to the Ohio River.  At the water's edge two medics struggled to roll a small, pale form onto a neon orange backboard.  Her patient.

Eddie joined her, and they scrambled down the gravel slope.  "Why do you have to always push the envelope?  You know the pilot's got the final call."

"Zack's a worrier."  Her gaze focused on the medics and the girl's unmoving body.

"There's nothing wrong with that.  Not when it's my ass on the line."  He slipped in the wet scree and fought to catch his balance.  "What makes this patient so important you're willing to risk my life?"

Cassie ignored him, rushing forward as one of the medics slipped, almost dumping her patient back into the river.  She reached out to help stabilize the backboard, splashing icy water over her boot tops while Eddie arranged their gear on a pile of torn-up paving bricks.

"What've we got?"  She raised her voice to be heard above the wind whistling through the bridge girders as they sloshed their way onto solid ground.  A dark, tangled curl whipped free of its barrette.  She twisted it behind her ear where it joined the rest of her rain-frizzled hair dripping down the back of her neck.

"Don't know.  Could be a jumper," one of the medics shouted.

The girl was maybe fourteen, fifteen tops.  Her lips were blue, her face pale, blonde hair waterlogged.  For a long moment Cassie couldn't find her pulse.  There.  Slow, thready, but definitely there.
Good girl, don't give up now
.

"Severe hypothermia."  Mud squished beneath her, revealing sharp rocks below it as Cassie knelt at the girl's head.  "She's apneic.  I need to tube her."

"Just give me a second," she muttered, her attention focused on her patient.  The girl's skin felt cold, waxen.
Wake up, Sleeping Beauty
.  Cassie's fingers parted her patient's blue-tinged lips.  It was a difficult position to maneuver in, but she slid the endotracheal tube into place in one smooth movement.  She reached for the ventilation bag to force oxygen into the girl's starving lungs.

"Slick," Eddie said in grudging admiration as he secured the tube with a few quick wraps of tape.

"Now or never, Hart," Zack shouted down from the helicopter.

She acknowledged the pilot's words with a nod but did not alter the rhythm of her hands.  The February wind burnt her face as she leaned over her patient, trying to shelter the girl.  Cassie couldn't spare a hand to wipe the rain away, so she ducked her face into the shoulder of her bomber jacket.

The acrid, smoky smell of wet leather jolted through her, and suddenly she was twelve again, standing in icy water, clutching her father's hand.  She shook her head, chasing the errant memory back to its proper place.

Severe hypothermia, trauma from a possible fall, cold-water immersion, shock--the odds against her patient were overwhelming.  They slogged their way up the steep, muddy hill, zig-zagging around broken pieces of asphalt and other debris left behind by the PennDOT crew.

"Give us a hand already," Cassie called to the policemen huddled beside their cruiser, supposedly directing traffic through the urban wasteland of deserted warehouses and road construction.  Not that there was any traffic in the predawn hours of a Monday morning.

With the extra manpower they were able to quickly haul her patient up to the waiting Sikorsky.  Cassie jumped in and positioned herself at the head of the stretcher.

"Hang on, it's gonna be a rough ride," Zack announced.

The helicopter's powerful engine revved.  Cassie's heart slammed against her rib cage as the craft shook.  After an initial upward lurch, winds began to buffet them without mercy.

A coffin, she was riding in a metal coffin.

She squelched the thought, forcing her attention onto her patient.  The girl's oxygen level was marginal, heart rate low, blood pressure non-existent.  Cassie slid her trauma scissors along the seams of the girl's Pitt sweatshirt, tugging the heat-stealing sodden cotton away.  A shower of small green tablets spilled from a plastic bag tucked into the girl's bra.

She scooped up the pills, examining their unique triangular shape.  "FX.  Looks like it's the real thing, too."