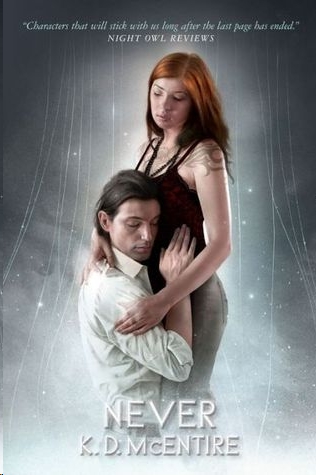 Published 2013 by Pyr
®
, an imprint of Prometheus Books

Never
. Copyright © 2013 by K. D. McEntire. All rights reserved. No part of this publication may be reproduced, stored in a retrieval system, or transmitted in any form or by any means, digital, electronic, mechanical, photocopying, recording, or otherwise, or conveyed via the Internet or a website without prior written permission of the publisher, except in the case of brief quotations embodied in critical articles and reviews.

Summary: Torn between her duty to her friends, the Riders, and her duty as the Lightbringer, Wendy must make the ultimate sacrifice to bring the worlds into balance once mmore, even if it costs her very soul.

As always, this book wouldn't exist without a truly fabulous group of people. I'd like to thank the consistently amazing Joe Monti, Lou Anders, and Gabrielle Harbowy. Thank you so much!

Thanks go to George Levchenko—not only is he an amazing photographer and web designer (Shameless Plug:
http://www.glnet.tv
)—but he very graciously answered 9 PM translation request texts and didn't frown too hard at my garbling his heritage. Thank you, George. You rock.

Karen. You know who you are, lady. Thank you.

Last but not least, thanks go to my husband Jake. Without you I'd never have time to write. Ever. Thank you so, so much.

The basement door creaked open. Rubbing her eyes and flipping open her cell phone to check the time, Laurie edged down the cold concrete stairs.

“Kara? Honey? It's midnight. What are you doing?” Dropping her phone into her robe pocket and wrapping her arms around herself, Laurie hesitated on the top step and squinted into the dim recesses of the basement, wishing she'd thought to grab her glasses at the first loud bang. “Note to self: need LASIK,” she muttered, feeling her way down a stair at a time, following the slams and grunts and mourning her warm, soft bed upstairs. The cats had probably already stolen her spot.

They'd purchased the house for a song two years ago and had slowly renovated the entire place from top to bottom, doing most of the tedious bits themselves but hiring contractors for the intricate work. This room was the last to go—they planned on making it into a den eventually, but for now it was snug, remarkably dry for San Francisco, and intact. There were some leftover furniture from the previous tenants: an ancient, wavy mirror, spiderwebbed with cracks; a molding chaise; and some rusting bed frames. Junk they still needed to haul off or recycle.

Laurie yanked on the closest light cord. The faint circle at the
bottom of the stairs didn't illuminate much, but it was better than nothing. Now she didn't have to squint. Kara stood at the end of the room, by the fireplace. She was wielding a sledgehammer.

“Kara, why are you breaking the fireplace? Aren't we leaving the basement alone until you get a raise?”

“You want a den,” Kara paused to say, readying the sledgehammer for another blow. The soot-stained firebox was gigantic, plenty large enough that her swings didn't brush the stone arch or the firebox edges.

Kara braced her legs and let fly with the hammer again.

SLAM. “Half the price of those quotes was the demolition of this stupid fireplace.”

SLAM. “Well, I've worked on the job for years.”

Uneasily, Laurie moved closer and pulled the cord on the dangling light bulb above, illuminating the remainder of the dusty room. Closer to Kara, Laurie could smell the Jack and Coke and, sure enough, there was a red plastic cup on a nearby stool, half full. “At this time of night? Really? Are you drunk?”

Kara stopped a moment and jerked her head toward her drink. “I've been sipping on that all night. It's all I had at the party. I'm not even close to drunk.” She rubbed her hands together to get a better grip on the hammer—Laurie considered reminding Kara about the work gloves flapping out of her back pocket but, considering Kara's mood, thought better of it. No matter what Kara claimed, Laurie knew her love well enough to recognize all the signs of a truly belligerent drunk when she saw them.

Kara said, “I couldn't sleep. I've got, what, three more days off, right? I can pull this down in three days, no problem. Less if you help.”

“Help?” Laurie squeaked, eyeing the neat line of tools laid out on the tarp. “I can't…I don't have any experience…what if it's a retaining wall?”

This time Kara stopped and gave Laurie a look of such derision that Laurie felt stupid for even bringing the worry up. “I'm sorry. You know what you're doing,” Laurie said, turning back to the stairs and perching on the bottom step. “Right.”

“Did I wake you?” Kara asked, wiping a forearm against her forehead, smearing sweat and dust in a dark swath across her face. “Is that why you're down here?”

“Yeah,” Laurie said. She rubbed her neck and sighed, trying not to think of how filthy she must be getting. “Look, I know you've done this before. And I know you can do this alone, but…I don't know, shouldn't a
team
of professionals be doing this? This place is
old
, Kara. What if you inhale lead paint or asbestos or something?”

SLAM. “Fireplace—hell, the basement itself—is too old for that crap. It's all hand-hewn stone, honey. Solid. It's a real piece of craftsmanship.”

“Then why are we tearing it down, again?” Laurie wrapped her arms around her knees and tried not to stare at the cracked mirror propped up on the sidewall.

The face stared out at her.

Kara had never believed her when Laurie said that she saw the face, and that sometimes it followed her, grimacing and growling from the different mirrors around the house, but Laurie was positive that she wasn't crazy. It was too bizarre to just be in her head. She knew what she saw.

Shivering, Laurie drew her robe closer. She'd never had this problem when they lived in Chicago; Laurie'd never had a single paranormal experience before she'd inherited the fixer-upper on Russian Hill. Glad to get out of the Windy City, Laurie had jumped at the chance to move. She'd gotten the job at the Stanford ER, and she and Kara settled down in San Francisco to start their new life.

Laurie never imagined the house would come with an occupant. She'd never been fond of horror movies, Laurie had no idea what to do, and it was getting worse.

It wasn't just the face, either, though the face was the worst of all. She also saw ghosts and skeletons and rambling, rotting things everywhere, even at work. But, the face…The face was awful; she hated it and, from the way it was glaring at her, she was fairly sure it felt the same way about her.

SLAM. “Old as this thing is, that earthquake a month ago could have turned it into a fire hazard. Even if we left it, I wouldn't dare use it. I can build you a
safe
fireplace, if you still want one down here. Besides, the way this room is right now, we wouldn't get our money back if we sold. So just go back to bed and let me tear the stupid thing down. Okay, honey?”

Laurie glanced at the face in her peripheral vision. It was showing its teeth now. Forget the bed and the cats; Kara had her grandmother's mirror hanging in their bedroom and the last thing Laurie felt like doing was hiding under the covers while the face watched her toss and turn. “I think I'd rather hang out, if it's all the same to you.”

“You're the one who's gotta work tomorrow,” Kara said with a shrug. Then she sighed and jerked a thumb at the duffel bag by the stairs. “Maybe you're right. Get a mask; if there's crap in the air, you shouldn't breathe it in. I'll put one on, too, in just a sec.” She braced her legs and pulled the hammer back. “I'm on a roll here. I want one more good hit first.”

Laurie scrambled to pull a dust mask out of the bag. It wasn't heavy duty like the ones Kara wore on the job, or the ones the contractors had worn to redo the insulation in the attic; this thing was barely a germ mask like she wore at the hospital. Still, every little bit helped.

Kara waited until Laurie had the mask strapped on and then swung at the back of the firebox with all her might.

“Crap!” Laurie jumped to her feet as a blast of icy air hit her in the face and blew her hair back. “What the hell was that?”

Kara, dazed, tugged on the edge of the hammer and a large chunk of firebox tumbled forward, hitting the hearth of the fireplace with a sharp THUNK.

From the mirror, the face smiled for the first time. The dim figure spun, pale hands aloft, and piggy red eyes glowed with glee. Laurie felt her stomach sink.

“There's something back here,” Kara said, drifting forward and hunching over to stare into the hole that the large chunk of masonry had left behind. She reached down and picked up the Maglite from the corner of the tarp. Thumbing it on, Kara shone the light into the crevice. A bright silver shine reflected back, blinding Laurie across the room.

Hand shading her eyes, Laurie began backing up the stairs.

Kara was an Amazon of a woman. If Kara wasn't going to leave under her own steam, Laurie knew there'd be no way she could move her; that didn't mean that Laurie was willing to sit down here and wonder what would shine so brightly after a century or two deep in the dark, while the creepy face screamed silent laughter in the mirror.

Laurie turned to scramble up the stairs. Over her shoulder she caught one last glimpse of Kara leaning as close as she could to the hole and shining the light deep inside.

The door slammed behind her.