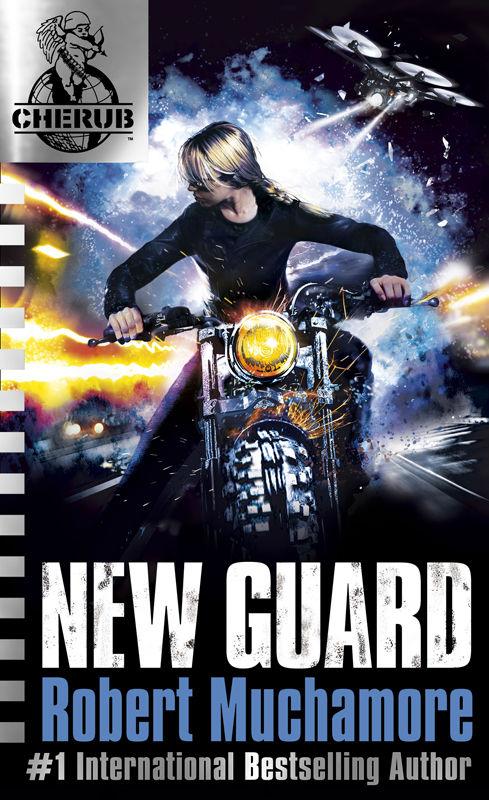 Robert Muchamore
was born in 1972. His books have sold millions of copies around the world, and he regularly tops the bestseller charts.

He has won numerous awards for his writing, including the Red House Children’s Book Award. For more information on Robert and his work, visit
cherubcampus.com

Praise for
CHERUB
and
Henderson’s Boys
:

‘The CHERUB books are so cool, they have everything I ever wanted!’ Josh, 13

‘My son could never see the point of reading a book until he read
The Recruit
. I want to thank you from the bottom of my heart for igniting the fire.’ Donna

Start reading with
The Escape

CHERUB is a branch of British Intelligence. Its agents are aged between ten and seventeen years. Cherubs are mainly orphans who have been taken out of care homes and trained to work undercover. They live on CHERUB campus, a secret facility hidden in the English countryside.

WHAT USE ARE KIDS?

Quite a lot. Nobody realises kids do undercover missions, which means they can get away with all kinds of stuff that adults can’t.

About three hundred children live on CHERUB campus. Among them are brothers RYAN SHARMA (17), twins LEON and DANIEL (14) and THEO (11).

JAMES ADAMS is a former CHERUB agent. After three years studying for his degree in the United States, James now works as a mission controller on CHERUB campus. He has been engaged to long-term girlfriend KERRY CHANG for two years.

With its large grounds, specialist training facilities and combined role as a boarding school and intelligence operation, CHERUB actually has more staff than pupils. They range from cooks and gardeners to teachers, training instructors, nurses, psychiatrists and mission specialists. CHERUB is run by its chairman, EWART ASKER.

Cherubs are ranked according to the colour of the T-shirts they wear on campus. ORANGE is for visitors. RED is for kids who live on CHERUB campus but are too young to qualify as agents (the minimum age is ten). BLUE is for kids undergoing CHERUB’s tough one-hundred-day basic training regime. A GREY T-shirt means you’re qualified for missions. NAVY is a reward for outstanding performance on a single mission. Ryan Sharma wears the BLACK T-shirt, the ultimate recognition for outstanding achievement over a number of missions. When you retire, you get the WHITE T-shirt, which is also worn by some staff.

No worries. Mum won’t be back for hours.

Leon heard the BMW roll on to a driveway strewn with brown leaves. The fourteen-year-old bounded two steps at a time, coming down to the front door as the car flashed to show it was locked. Its driver approached, his bulky outline shimmering through frosted glass.

Leon wore frayed denim shorts a size too small, grubby trainer socks and a black muscle vest. His hair was bleached and tight-cropped, showing a silver cross in his right earlobe.

‘Hey,’ Leon said, grabbing the latch and staring down, embarrassed.

The BMW on the drive was a year old. Nigel was forty-two, wearing bottle-green slacks, Ralph Lauren short-sleeve tight around the gut and four grand’s worth of Carrera watch. The expensive look was spoiled by twisted teeth and choking aftershave.

‘Finally here,’ Nigel said, as he crossed the threshold and made a little clap. ‘You look really nice.’

Leon smiled coyly, then looked alarmed. ‘Take your shoes off. My ma is a carpet Nazi.’

‘Of course,’ Nigel said, peeling slip-on brogues as he glanced around the little hallway, at family pics and a coatstand. ‘Your parents?’

‘Don’t worry, old man,’ Leon said, smiling and resting one hand on the wooden knob at the bottom of the stair rail. ‘My sister is at uni. Mum’s at the Trafford Centre, and she’s left me dinner to heat up.’

Leon shrugged. ‘You got something for me?’

‘Absolutely.’ Nigel pulled out a roll of twenties. ‘Three hundred, as agreed.’

Leon pinged off an elastic band, then quickly counted the notes before shoving them into his front pocket.

‘I’ll have enough to go to V-Fest with my besties. And get my Xbox fixed.’

‘I can’t believe I’m here after all the messages we’ve sent each other.’

‘Me too. Hang on a sec while I grab myself a Coke.’ Leon backed through a door into the kitchen, seeing his twin Daniel, plus a larger man in a smart suit. As soon as Leon gave the thumbs-up, the pair hurried out into the hallway, pursued by a stocky woman with a pro camcorder balanced on her shoulder.

‘Nigel Kinney,’ the suited man announced. ‘I’m Jason Nolan from the Paedophile Hunting Network. Would you like to tell me why you came here this afternoon?’

Twins Leon and Daniel watched through the doorway as the camera operator zoomed on Nigel, who held hands in front of his face.

‘Mr Kinney,’ Jason Nolan demanded. ‘PHN has been tracking your behaviour. What have you got to say for yourself?’

Nigel spluttered. ‘I didn’t lay a finger on him. I didn’t plan on doing anything illegal.’

‘But we have hundreds of messages, Mr Kinney,’ the presenter pushed. ‘You sent and requested sexually explicit images. Our hidden camera just filmed you paying Leon three hundred pounds.’

‘I don’t understand,’ Nigel said, backing up behind the coatstand but pursued by the camera operator. ‘You’re not the police?’

‘No we are not the police,’ Jason explained. ‘We are a totally independent organisation that tracks the vile behaviour of people like yourself. We will send all of our evidence to the police and you may face prosecution. We will also put a video about your activity on our Paedophile Hunting YouTube channel.’

‘I didn’t touch him,’ Nigel shouted. ‘I just came here to hang out and play Xbox with the boy.’

Leon shook his head at his twin Daniel, as Nigel and the camera operator continued their dance around the swaying coatstand.

‘If you’re not police you can’t arrest me,’ Nigel blurted.

‘We’re not stopping you leaving,’ Jason said, aiming a hand towards the exit. ‘But we will make sure that your wife sees all the evidence, for the sake of your twelve-year-old son. And we’ll also be notifying your employer.’

‘I’m leaving,’ Nigel shouted, hands over face as he barged the camera operator and made for the door.

‘What do you think your eighty-two-year-old mother will think about this when she finds out?’ Jason demanded. ‘Are you ashamed of yourself?’

‘I never laid a hand on him,’ Nigel said tearfully, as he fumbled with the door catch.

‘But you were convicted of two sex offences in 1998, while doing a summer job at a holiday camp,’ the presenter noted. ‘Have you got anything to say to those victims? And how many other boys are there that we don’t know about, Mr Kinney?’

Nigel spun around in the hallway, then pounded the wall. ‘You’ve stolen my shoes. Where are my shoes?’

‘Nice knowing you, pervert,’ Leon taunted. ‘How do you like my tight little shorts now?’

‘This is entrapment,’ Nigel shouted, pointing at Leon. ‘He set me up … What have you done with my damned shoes?’

Nigel started wagging his finger in presenter Jason’s face. ‘I have a very,
very
good lawyer. If you put this online I will sue you for every penny you have.’

Jason smiled to the camera. ‘Paedophile Hunting takes legal advice on everything we do, Mr Kinney. Perhaps you’d like to take my business card so that your lawyer can contact me?’

‘Pricks,’ Nigel shouted, as he gave up on finding his shoes, grabbed car keys from his pocket and opened the front door. ‘May you rot in hell.’

Leon and his twin gave Nigel two-fingered salutes as he stumbled on to the leafy driveway in his socks. They stood behind the camera operator as she filmed Nigel getting into his car, revving the engine and squealing his rear tyres as he backed off the drive.

Everyone paused for breath, then smiled.

‘Nicely done,’ the camera operator said, as she switched off and took the bulky cam off her shoulder.

Jason grinned and led the quartet in a round of high fives. ‘You boys were great.’

‘How long till the video goes live on your YouTube?’ Daniel asked.

‘I’ll upload the footage to my edit guy in London. He should have something online by this evening, and we’ll send the evidence to the cops by tomorrow morning.’

‘And you’ve
got
to blur our faces,’ Leon said firmly. ‘We could get in a lot of trouble with our ’rents for getting involved in this.’

‘For sure,’ Jason agreed. ‘There is one thing though.’

‘Your contact, the one who got us intelligence on Nigel Kinney’s previous convictions and stuff. Is there any way I could talk to them personally?’

The twins shrugged. Daniel answered, ‘We’ll help you again if we can.’

‘But our contact is personal,’ Leon added, before checking the time on his phone. ‘Can you run us to the station? Our dad will go ape if we don’t make it home before six.’

‘Sure,’ Jason agreed, before glancing at his camera operator. ‘You mind starting the clean-up here while I drop the boys off?’

As the camera operator nodded, Jason grabbed his car keys, but Leon had disappeared into the living-room.

‘We need to shift, Leon,’ Daniel said anxiously. ‘There’s only one train an hour and it’s due in fifteen.’

‘I know,’ Leon agreed, as he grabbed a set of black trackie bottoms draped over a leather couch. ‘But I don’t care how late we are, I’m not going out in public in these dumbass shorts.’