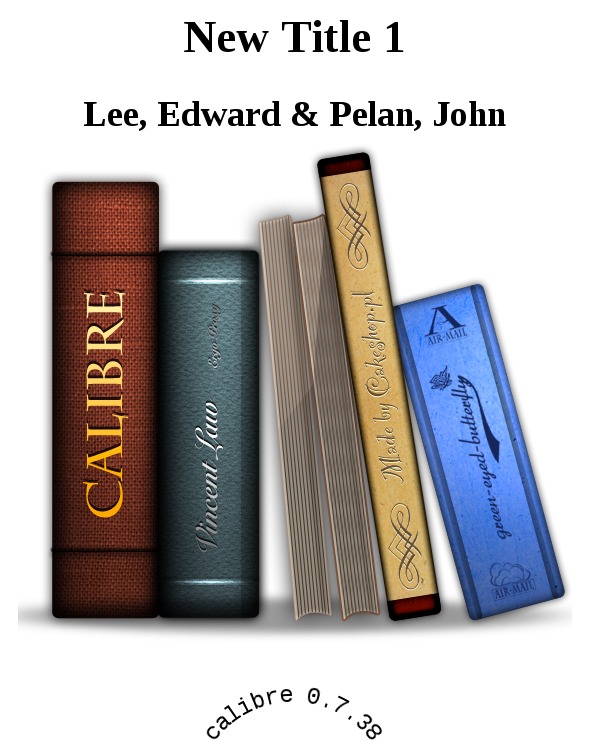 by Edward Lee and John Pelan

This ebook is licensed for your personal enjoyment only. This ebook may not be re-sold or given away to other people. If you would like to share this book with another person, please purchase an additional copy for each person you share it with. If you’re reading this book and did not purchase it, or it was not purchased for your use only, then please purchase your own copy. Thank you for respecting the hard work of this author.

First, let me openly admit that, in delving into the darkest regions of the human consciousness, in exploring the most demented extremes of perversity and aberrant behavior—a task I’ve committed myself wholeheartedly to in creating my own somewhat notorious body of works—an undesirable side effect is I’ve become quite jaded when it comes to horror fiction (and film, too, for that matter). Regardless of their pandering promises of gut-wrenching terrors, there is very little I read or see that draws more than a bored
ho hum
of ennui…

So very little to match those sick, feverish sensations of dread gleefully suffered while surviving a first encounter with, say, the writings of the Marquis de Sade, or Jack Ketchum’s
Off Season
, or Wes Craven’s
The Last House on the Left
, or Tobe Hooper’s original
The Texas Chainsaw Massacre
, or George Romero’s
Night of the Living Dead
, or David Cronenberg’s
They Came from Within
, or Pier Paolo Pasolini’s
Salo
, or Jorg Buttgereit’s
Nekromantik
, or John McNaughton’s
Henry: Portrait of a Serial Killer
, or the ripoff
Confessions of a Serial Killer
, or such classics of seemingly “unredeeming social value” as those beloved Herschell Gordon Lewis’ sickflicks like
Blood Feast, 2000 Maniacs, A Taste of Blood, The Wizard of Gore,
and
The Gore Gore Girls
…? or their diseased offspring such as
Blood Diner, Bloodsucking Freaks, Doctor Butcher, M.D., Don’t Go in the House, I Spit on Your Grave, Last House on Dead End Street, Maniac, Mark of the Devil
, and
Street Trash
…

In part, I suppose, the fault lies in that we live in an age of utter hypocrisy—an age of false Puritanism and sham prudery, of the Moral Minority, where, although our newspapers and newscasts scream with closeups of bloody atrocity after bloodier atrocity, and the statisticians regale us daily with the ever-climbing percentages of teen violent crime and teen and preteen sexual activity and resultant pregnancies and AIDS infected casualties, try “pushing the envelope” in film or fiction, in these areas, and you’ll find out just how conservative/uptight The Establishment can be…Look at how Hollywood censorship chewed up the celluloid release of the “too sadistic overtones” present in the original, script-based cut of Dave Schow’s
Texas Chainsaw Massacre III!

Okay
.
Okay
.
I’m down off my fucking soapbox, all right, already
…?

Heh
. In case it hasn’t hit you yet, think about
this
—

only
2
of the gutwrenchers I listed were
books
, the rest were all splatterfilms…
right?

So. Who
does
deliver a total, no-holds-barred, bloody, puking bodyslam of a read in the world of horror fiction…? These guys and ladies can’t all be pussies and limpdicks, can they…?

Chances are, if you’re holding this book in your hot, sweaty palm, right now, then we might ASSUME you already know,
right…?
But, then again, you know the standard caveat regarding “ASS-U-ME”, don’t you. I mean, you
might
just be a pro-wrestling fan who picked this up thinking, “O, goody! a nice little book about Hulk Hogan and Sting and Hacksaw Jim Dugan and Macho Man Randy Savage and the Undertaker and The American Dream and all their ring-buddies…
right?
I mean,
anything’s possible
…

But, quite honestly, none of these guys comes anywhere
close
to the writer in question, when it comes to being the true literary inheritor of the Herschell Gordon Lewis’ filmschool legacy…the
UNDISPUTED, HANDS-DOWN KING of the MONDO GROSSOUT
…

I believe most readers familiar with the more extreme fringes of modern horror would agree. There is only
one
writer whose works I always approach with that same frisson of anticipatory terror, that same sick, thrilling knotting of the stomach I felt as a child.

I mean NOBODY, writes as consistently heatedly-explicit, overtheedge, bloodbathing, gutwrenching, hardcore horror as EDWARD LEE. He pulls no punches. Takes no prisoners. Makes no apologies.
He WANTS to GROSS YOU OUT! BUGFUCK YOUR BRAIN! MAKE YOU PUKE! BIGTIME!
And
he never, never fails to deliver
…

If that’s what you’re looking for in horror, then
GOON
will prove no disappointment. I guarantee you. Next to his novel,
THE BIGHEAD
, I believe
GOON
is the most nauseatingly repulsive, dementedly perverse can’t-put-it-down-no-matter-how-much-you-want-to page-turner to yet bear his name, chock full of sex-u-ral deviates and muckjumpin’ bughouse schizoid freaks, and psycho possum-chompers from Hell…

Now, Edward Lee is one sick, corpsegrinding fuck of a writer, but you tagteam him with another stone twisto, chainsaw-huggin’ whackadoo like the notorious Darkside Press’ Editor/Publisher John Pelan—the same psycho who brought you the
DARKSIDE: HORROR FOR THE NEXT MILLENNIUM
anthology and such demented collections as Wayne Allen Sallee’s
WITH WOUNDS STILL WET
—and add to that not only Pelan’s creative proclivities for the perverse but also his preeminent knowledge of the wrestling scene (this guy is actually
friends
with some pro wrestlers!)—you’re in for one gut-grabbing rollercoaster ride to Hell,
count on it
…

I kid you not, reading
GOON
, I could barely tolerate the mere
sight
of food for nearly two days afterwards…

I confess. It was the sex scene between Officer Straker and Ghoula that did it for me…

I mean, this shit could
damn near
turn a stone horndog pussyhound
celibate
for
life
…

So, hang on, have some truly devilish, demented fun, and get ready for one HELLUVA GROSSOUT…

And, to paraphrase the immortal/immoral words of the Granddaddy of Gore,
hisself,
Herschell Gordon Lewis, just keep tellin’ yourself:

FINAL CAVEAT: It may be. But I’d still keep a pack of those industrial-strength airline flightbags handy!

Prophet of the Perverse,