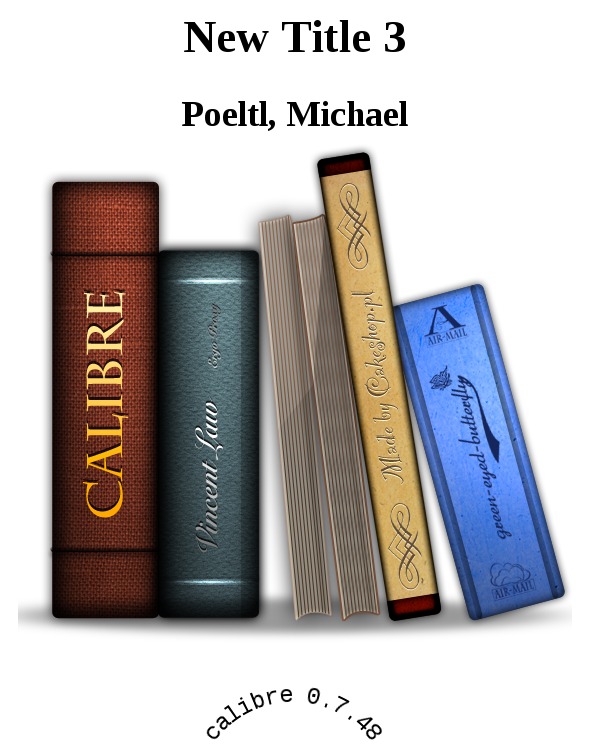 This book is a work of fiction. The characters, incidents, and dialogue
are drawn from the author’s imagination and are not to be construed as real. Any resemblance to actual events or persons, living or dead, is entirely coincidental.

The Judas Syndrome.
Copyright © 2009 by Michael Poeltl.
All rights reserved. No part of this book may be used or reproduced in any manner whatsoever without written permission except in the case of quotations embodied in critical articles and reviews. For information contact Michael Poeltl at
[email protected]
.

The more rapidly a civilization progresses, the sooner it dies for another to rise in its place.

Havelock Ellis
, The Dance of Life

M
y name is Joel. Ever heard the expression; Shit happens? It hardly does justice to what’s happened to me, but in a pinch it will suffice as a summation of my life these past few months. I wasn’t like this before. Maybe you won’t like me much after I tell you my story. Maybe I don’t like myself much right now.

My friends can attest to this. My friends have always featured prominently in my life. Some helped shape my earliest memories while others I only met in high school. But as much as my friends have shaped my past, no memories can compare to those of the last few months as we struggled to survive. Their actions changed me and the way I lived as much as mine shaped their day to day lives. For those of us who made it out of this thing alive, the rewards were bittersweet. We kept our lives but lost our innocence and our faith, the lack of which can empty your existence like water evaporating under a merciless sun.

And for the rest of us…

T
he Apocalypse came quickly. Growing up in a small northern town located over two hundred kilometres away from any major city left me impervious to such global threats as war, famine, disease, and vicious dictators. I watched the news every night and knew the world wasn’t
right
, but I never suspected just how
wrong
things were getting.

Three weeks before disaster struck, I was planning to go to the beer garden at the town park. Remembering past events, I suspected there would be a few fights throughout the evening, but nothing too brutal unless some yahoos from another town decided to show up and make a play for our beer and women. I tried to steer clear of such free-for-alls unless a friend was getting the worst of it.

That friend was usually Sonny. Much as I loved the guy, drinking with him was a risky undertaking, for me as well as him. Big, beefy, and fearless, he attracted idiots like flies. Whiskey-fed farm boys, frustrated by a week of shitty work for shittier pay, would try to score a reputation by taking on Big Sonny. When he handed their asses to them, they’d try the strength in numbers routine and come back with some friends. That’s when I had to get involved, whether I liked it or not. The morning after, it was hard to tell which hurt worse- my hangover or my bruised ribs. Wincing at past memories, I stocked up on aspirin.

My buddy Connor pulled into my driveway shortly after four-thirty that afternoon. The sky was bluer than it had been for days, and I was in the front yard, trailing my bare toes through the lawn pond. The goldfish were strangely agitated, darting for cover instead of swimming to the surface for food as usual.

“
Just got off work- thank God!” Connor had a summer job with a landscaping company, so he’d spent the day sweating under a blazing sun and listening to hovering housewives whine out instructions and warnings. “If you’re done with the goldfish pedicure, let’s go get some beer for tonight!”

“
What are you talking about?” I wasn’t sure I liked this. I DEFINITELY didn’t like missing the opportunity to hook up - you were as likely to stumble into a relationship as you were a fight on a night like that.

“
Listen, you like a little excitement in your life, right?”

“
Sure, unless it gets me in jail or family court.”

“
Good, then you're in.” He started to roll his window back up.

Connor smirked. “Be ready to go at six o'clock.”

“
Sonny’s expecting me at the gardens. He’ll kill me if I don’t show.”

“
Sonny couldn’t kill his own dick.”

I had to admit that I was intrigued. If Connor was willing to forgo the beer gardens, then his plans must really be something. True to his word, he picked me up at six, and we headed off toward parts that were, for me, unknown.

At the beer store we ran into Ruby. It was rumoured that she had slept with the entire hockey team. Two years ago she was Connor's girlfriend, now she was regularly coming between the jocks and their straps.

Her brows arched at the sight of us. “What are you guys doing in here: getting some drinks to warm up for the gardens?” I let Connor answer- I was too busy staring at the way her melon-sized breasts were trying to push out of her blouse.

“
No, we've got other plans. Can't tell you what we're doing, but it’ll be better than trying to keep up with the fall-down drunks at the beer gardens.”

“
Oh, well, I just thought I'd see you guys there. Maybe get to dance with you or whatever.”

The
whatever
part had sweet possibilities. I was wondering if it were too late to change my mind when Connor nudged me.

We bought the beer and went back to the car, where I finally blurted, “Are you going to tell me where we’re headed, or what?”

Connor smiled and beckoned for me to get into the car. When we were both seated, he reached into his shirt pocket and pulled out two acid hits.

“
We don't want to be at the beer gardens while we're on these,” he grinned. While I peered closely at the stuff, Connor added, “I've only done it a couple times, in Grade 11, but they were the wildest trips of my life.”

“
You sure, man? I've heard some insane shit from people who've had bad trips on this stuff.”

“
No doubt. It’s pretty crazy, Joel, I won't lie to you. It's not the Sweet Bitch.” Sweet Bitch was our pet name for his dope pipe. “In fact, it's going to mess us up something huge. You’ll be seeing hotter chicks than Ruby in on an acid trip, my friend.”

If anybody could make me see the bright side of an otherwise risky situation, it was Connor. I’d done mushrooms once and enjoyed the trip, and he explained that acid was “mushrooms times ten.” I hated math in school but liked that number, so I forgave him for ruining my sex life and said, “I’m in.”

Settling into my seat, I closed my eyes and let him drive.

“
The perfect place to start up the summer, don't you think, old fella?” Connor, busting to drop his hit, dug into his pocket.

“
Not a bad call,” I allowed. As I handed him a beer from the backseat cooler, I added, “You know, you should have planned this better: no ladies up here.”

“
Don't be too sure I haven't taken care of you, old man.” He gave me that knowing smile, and I had to grin back. There might be real tits involved in the evening after all.

He popped his hit under his tongue and held mine out to me. “What the hell, let’s party.”

“
Can you feel it yet, man?” Connor was buzzing so much that I could almost hear it emanating from his head.

“
I can't say; it might take some time, right?” Then
bang
. I was hit. My head reeled and my perspective went beautifully apeshit. “B-i-n-g-o.” That was all I could say.

I studied my hands for what felt like the first time in my life. There they were, irreplaceable, attached to my arms at the wrist. With all of their digits and movable joints and feelings, they were so sensitive to the touch; that’s it! Touch was born of the hand, of its fingers, my fingers, they were my own, and they were priceless.

I spun around in slow motion, still marveling at the dexterity and beauty of my hands. Connor was lying on the ground with his mouth wide open. He was watching me, he started to laugh and I followed.

Suddenly a voice broke my psychedelic reverie. I watched it all shatter like rainbow glass to make way for reality.

“
Someone sounds like they're having way too much fun.”

Sara and Julia were coming up the hill, each upward step making their denim skirts ride higher up their thighs. I’d known both girls for years, and when their smirks and coy greetings clued me in that they were joining us by prior arrangement, I realized that this was what Connor had meant by taking care of me. I could have kissed the stoned bastard, as I’d had a crush on Sara for months, but didn’t want to risk sending the wrong message to the girl I‘d admired from a distance.

“
Thanks, guys, don't mind if we do.” Sara, flirtier than I’d ever seen her before, settled on the grass beside me and took a swig from my bottle. I watched her red lips draw tight around the bottle head and thanked God that she dumped her deadbeat boyfriend two weeks ago.

Hours later and ten beers into the night I found Sara pushing me down, her beer-sweetened breath in my face. Beside us, I think that Connor and Julia were doing something similar, but at that point I honestly did not care, Sara remained my focus, her mouth, her eyes, her hands.

L
ight brightened the eastern sky and crawled across the hilly terrain. We shook the morning moisture out of our clothes, got dressed, and drove back into town. Sara and I took her car. Last night she admitted that she’d had the hots for me for months. We weren’t yet sure that we had anything in common, but if that department turned out to be a dud, we were sure compatible naked.

When we arrived at my place, I gave her a tour of the house, and she made breakfast. We were alone: Mom was still in Australia and Kevin, who rented a room from us, was at work. When we finished eating our fried egg sandwiches, I broke out a joint. We then retired to the family room to watch some TV and get buzzed.

The Grimm Reaper was in the news again. This anonymous maniac had everyone on edge with his vows to create a better world by kyboshing the old one. He first made his presence known last May, via a website that went through so many proxies that its source was indecipherable. He claimed to have acquired some thirty nuclear missiles from Iraq, employed by Saddam’s secret service, smuggling them out before the small country had agreed to the lengthy UN weapons inspections. He released messages to the media threatening to inflict worldwide nuclear devastation should the various governments not heed his ‘suggestions’, which included destroying schools and houses of worship, both of which he accused of turning people into automatons. No one knew exactly who he was and whether he was serious or full of shit, but a report had been leaked that the UN was searching for missing warheads, and that was enough to make the Grimm Reaper a 24-7 news feature.