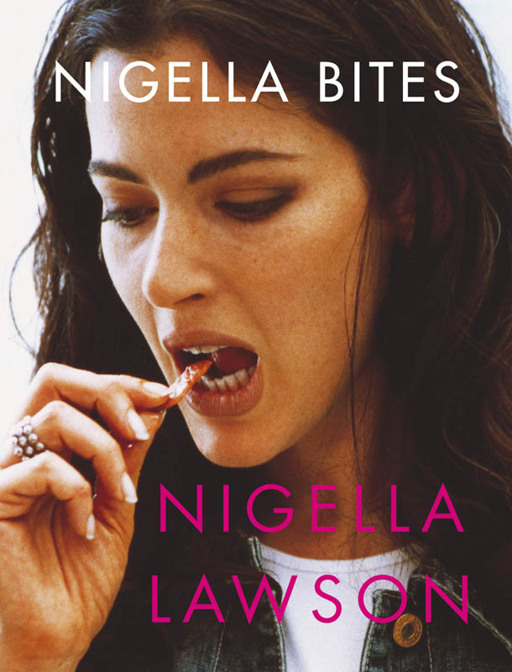 With the success of her two bestselling cookery books, How to Eat and How to be a Domestic Goddess, and her first television series, Nigella has become a household name, symbolising all that is best, most pleasurable and least fussy about the place of good food - both making it and eating it - in our lives.

Now she’s back with this ravishing new book to accompany her second Channel Four television series, ‘Nigella Bites’. Full of mouth watering recipes, including all those featured in her new television series, Nigella Bites offers some recipes which are exciting twists on old favourites, others which are new and different, and all of them characteristic of Nigella and the ethos of her TV series - uncomplicated, original, fresh, and perfect for the way we live today. They’re easy to produce after a busy day at the office, fun to linger over at weekends or to make with the kids, delectable to read about, dreamy to look at and delicious to eat. Included here are recipes for All-Day Breakfast, Party Girl, TV Dinners, Trashy Food, Slow-Cook Weekends, Rainy Days, and a host of other daily delights. Nigella wants her readers and her viewers to enjoy the pleasures of eating and cooking. With her, how could anyone resist?

Nigella Lawson is the author of bestselling books – How to Eat (‘may just be the best cookery book ever’ Daily Telegraph), How to be a Domestic Goddess (British Book Awards 2001), Nigella Bites (WHSmith Award 2002) Forever Summer (‘images of warmth and Mediterranean climes’ Time Out), Feast (‘a voluptuous and delicious piece of food writing’ Guardian), Nigella Express (no. 1 bestseller with over 1 million sales), Nigella Christmas (‘everything to make your Christmas sparkle’ Independent) and most recently Kitchen (‘another blockbuster – hearty and wholesome’ Daily Express) – which, together with her successful TV series and the Nigella Quick Collection app, have made her a household name around the world. She lives in London with her family.

THE PLEASURES AND PRINCIPLES OF GOOD FOOD

HOW TO BE A DOMESTIC GODDESS

BAKING AND THE ART OF COMFORT COOKING

RECIPES FROM THE HEART OF THE HOME

Bream with Anchovies and Thyme

Chicken with Chorizo and Cannellini

Linguine with Garlic Oil and Pancetta

Peppers with Feta and Almonds

Salmon with Greens and Shitake Mushrooms

To tell the truth, I didn’t intend to write another book so soon. Not that this is by way of an apology: I am too evangelical about the food I like eating (and cooking) not to want to present the recipes from the new series of Nigella Bites to you, taking advantage of the extra wittering space a book allows. But I’ve wanted, too, to borrow from the other medium, so this book is slightly different from my previous two: there are more pictures and the chapters inevitably take their shape and content from each programme in the TV series.

In truth, there isn’t a conflict. I’ve always felt that food is nothing if taken out of the context in which it’s eaten, and the programmes – and consequently these chapters - are arranged according to the sort of cooking we might want to do, depending on our life, our timetable and our mood. But, please: these are suggestions only, not inflexible command. Life is not so rigidly constructed, and I might well want to cook something for a weekday dinner that I’ve earmarked here for a Sunday lunch, and presume you might, too.

Anyway, even if themes, the focus of these chapters, are varied, what remains constant, and so what links them, is taste. I don’t mean taste in a food-snobbish, status sense (please, I am just not interested) but the tendency towards certain techniques (for me, that means easy ones) and certain ingredients. Restaurant chefs rely, to a greater or lesser extent, on innovation and novelty; what’s more, they are generally less constrained by ordinary domestic concerns of budget or storage space. They can buy a bottle of some special liqueur for one particular recipe; we are unlikely to. So, you might well find that certain ingredients crop up repeatedly. In the same way, when a little bit of stock is needed, I’m not going to instruct you to start boiling up bones left, right and centre, just for the purist sake of it, but rather suggest you use the shop-bought stock-concentrate I use myself. The point is, this is the way we cook at home. And for all that this is, frankly, the book of the television series, I am neither a chef nor a performer: none of the recipes here has been specially constructed for broadcast or publication purposes: this is the food I cook, the food I eat.

NOTE: Eggs, where specified, are large (and preferably organic and free-range); all butter is unsalted, and salmon and meat organic, for preference.

While breakfast in the table-laden, leisurely sense might not be an option in our everyday lives, weekends make something a bit more greedy and ceremonial possible. Or just refuse to be constrained by the orthodox timetable and make late-lie-in breakfast food for whatever time of day you want.

If you’re going to attempt anything other than a bowl of cereal for an ordinary weekday breakfast, then muffins are the best bet. They are the easiest things to make, not least because the laziest of stirring is what’s required. The truth is that a heavy, lumpy batter makes for the lightest muffin. Having said that – and this holds true for the recipe below, too, of course – no homemade muffin is ever going to be as risen and aeratedly humped as a factory-produced one, and nor should it be. The point is a muffin is not a cake. I presume anyway that they were originally devised to be eaten in much the same way as the yeasted version, that’s to say as a form of sweet, tender roll with jam. And that’s exactly how I eat these. Split them still warm and, mouthful by mouthful, smear with the best unsalted butter you can find, adding as you want, marmalade, jam or amber, liquid-light honey.

Melt the butter and set aside. Combine the flour, ground almonds, bicarb, baking powder, sugar and orange zest in a large bowl. Measure the orange juice and milk into a jug and whisk in the egg and then the cooled, melted butter. Now pour the liquid ingredients into the dry ingredients, mixing with a fork as you go. The batter will be lumpy but that’s as it should be: you want everything to be no more than barely combined. The whole point of muffin mixture is that it must never be overworked.

Spoon out the mixture equally into the muffin cases and cook for 20 minutes. Remove, in their paper cases, to a wire rack and let cool slightly (but not completely) before devouring.

I got the idea for these from one of my Amazon-trawled titles, one of those ring-bound American books, called magnificently (and appropriately) The Joy of Muffins (by Genevieve Farrow and Diane Dreher). This is my version, and is great by itself or with a plate of burnt and sticky-skinned sausages.

Mix the flours, baking powder, bicarb, salt, mustard powder and cheese in a large bowl with a fork. In a large measuring jug, beat together the remaining ingredients. Pour into the dry ingredients, mixing lightly with your fork, remembering that good muffins are made from lumpy batter.

Pour into the muffin tins and cook for 20 minutes, then quickly take them out of the oven and put a little cheese and a sprinkling of Worcestershire sauce on each one. Put them back in the oven for another 5 minutes, then put the muffins on a baking tray to cool. Eat them while they are still warm but not hot.

While American pancakes with syrup are undeniably a supermom-with-kids breakfast cliché, they are also undeniably good, and in my book – which this is, after all – that alone argues forcefully for their inclusion here. They are anyway very easy to make, easier than thinner English pancakes or crêpes, and it’s not hard to get into the weekend habit of mixing them up. They’re what I make for my children’s breakfast at weekends. I make up half-quantities of the batter (or the full amount on Saturday, saving half of it in a clingfilm-covered jug for Sunday) and let them squeeze golden syrup, rather than the smokier maple, over them; we dispense with the bacon altogether.

Talking of which, if you can, buy pancetta from a deli or a butcher and ask them to slice it finely. This makes for crisp salty wafers, perfect with the resiny sweetness of the syrup. Otherwise ordinary bacon is, of course, fine, though I’d go for streaky rather than back. It’s the fat in the bacon that makes it crisp up.

For speed, it makes sense to cook the pancakes in small, dolloped-on rounds, on the griddle or in a non-stick frying pan, but I often use a blini pan, which produces perfect (or as perfect as I am ever going to achieve) 7cm rounds, as in the picture here. The only drawback is that, unless you dot your hob with blini pans – hardly practical or conducive to early morning cheer – this means cooking them one by one.