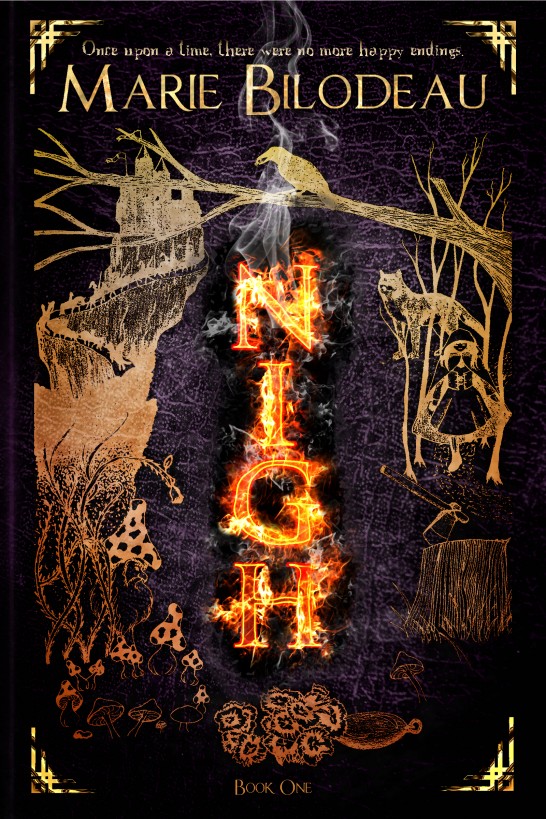 Cover Design by Designs by Lynsey

All rights reserved. No part of this
publication may be reproduced, stored in retrieval system, copied
in any form or by any means, electronic, mechanical, photocopying,
recording or otherwise transmitted without written permission from
the publisher. You must not circulate this book in any format.

To Katherine Gallant of the Graham
Clan,

for being so freaking awesome.

Nigh was a labour of much love, and many people
contributed, whether they realized it or not. I first got the idea
for Nigh at a storytelling show, where I had a vision of a show
that would be supported by a book, and vice versa. So, first and
foremost, thanks to the Ottawa Storytellers for their love of
stories and fostering of the community.

Adam Shaftoe, from The Page of Reviews, who seeded
the idea for a novel serialization (this is on you!).

To the Gerow/Taverner family for sharing stories,
names, a hometown and some fun facts.

Thanks to Kathryn Hunt for sharing faerie knowledge
and to Darrell Kouri, for sharing his knowledge and expertise of
cars. And to Derek Künsken, Linda Poitevin, Karen Dudley and Nicole
Lavigne for constant cheerleading.

They say the end is nigh, dear friend,

The world has passed its prime,

And we must bid good bye, dear friend,

To all the happier time.

The small gear popped out and tumbled to the floor,
the desk lamp lighting its fall before it vanished into the
darkness below the workbench.

“Damn it!” Alva flicked back a sweat-dipped strand
of rust-coloured hair that escaped her braid, and crouched to find
the escapee. She felt under the workbench with oil stained fingers,
but calluses blocked any sensation resembling a small gear.

“Argh, under-the-workbench gross.” She stood back
up, disgusted, wiping her hand on the leg of her blue
coveralls.

“What’s that? You’re gonna clean under the
workbench?” Gruff’s voice boomed behind her.

“Oh ya,” she turned, eyebrow raised. “Next thing
you’ll tell me, you expect me to mop the floors, too!”

She grinned. “It IS clean. Cleanest in town! As long
as you don’t look under the workbenches.” She sat on the stool, the
innards of the watch laid bare before her. Intricate little swirls
hugged gears and tumbled into small notches, so many that Alva
didn’t know where to start. Each tiny gear did so much, an
intricate system of metal and planning that turned time itself.

She sighed and gently closed the watch. Gruff’s
dirty overalls blocked her peripheral vision. “I thought you were
gonna save your money to get that fixed, Al.” His voice was
uncharacteristically soft.

“I need to save money for Pete’s school. Besides,
this isn’t gram’s watch.” She showed him the scratched, tarnished
cover. She’d kept her great gram’s watch in perfect condition, just
like her dad had before her.

She shrugged. “I didn’t want to practice on the
original, but I thought that if I could practice on another watch,
then maybe… I don’t know. I don’t think my hands are young or
nimble enough anymore.”

Gruff guffawed, throwing his head back, his
rebellious white hair swaying with his amusement. “If your hands
can’t handle the small stuff, we’re all in trouble!” He held up his
large hand, the right thumb tweaked to the side – it had never
healed right after a car had slipped off its jack and snapped
it.

He sobered again. “You should keep trying. Maybe
you’ll repair finer things than cars someday!” He turned back to
finish his inventory.

“I like repairing cars!” She screamed after him, but
he just waved back without answering.

The garage had already been closed for a few hours.
Neither Alva nor Gruff were in any rush to get back home, him to an
empty nest, her to an empty home. Pete would be back tomorrow, at
least. She hoped the university visit had gone well. Her little
sister wasn’t one for disclosing information on the go. Probably
too lost in her own thoughts to think of texting Al.

The main shop lights were off – drivers seemed drawn
like moths to a flame to a lit garage. Alva relied on a small desk
lamp.

“All right,” she mumbled. “My dad built trains, I
fix cars, and now let’s go smaller and fix a watch. Let’s make this
happen!”

She grabbed her flashlight and crouched again. She
imagined the grit under the bench would consist mostly of dirt and
maybe some food. Only the small metal gear should reflect the
light. Well, she hoped there weren’t too many sharp and pointy
things under there, anyway.

The light beamed and blinded her for a second. She
placed her cheek against the cold concrete floor, following the
beam. Most of it looked like small rocks, probably all the crap the
city threw on the roads during ice season.

A piece reflected the light. “Gotcha,” she said,
reaching in to sweep forward everything in that vicinity. She
reached as far as she could, practically wedging her shoulder under
the bench. She extended her fingers as far as possible, but just as
she lowered her hand, something sharp pricked her.

“Son of a…” she jerked back, knocking into the bench
and throwing herself back. A hammer landed near her head.

“You okay?” Gruff called from the parts room.

“Ya, I’m fine,” she answered absent-mindedly as she
stared at the blood bubbling on her finger. She grabbed her old
stained rag and wrapped it around the wound, holding it tightly to
stop the bleeding. Once the throbbing had subsided, she removed the
rag to have a closer look.

On the side of her finger, a perfect little set of
holes lined up in two connected semi-circles. Just like a little
jaw.

“Gruff! We’ve got rats in here!” Gruff stormed out
of the parts room, light spilling in behind him, forming a perfect
halo around his body. She would have laughed if she wasn’t busy
getting off the floor.

“Where!” He grabbed the wrench from his belt and
slapped it on his left palm.

Alva nodded toward the bench. Faster than she
thought the six-foot-some, two-hundred-and-eighty-at-least
sixty-something-year-old mechanic could move, he was on his knees.
He grabbed her flashlight and redirected it toward the offender,
moving it around under the bench before standing back up with a
grunt. “Damn bugger’s gone.”

His eyes lowered to where she still clutched the rag
on her finger, the blood barely distinguishable from the oil
stains. He mumbled and moved, much more slowly, to one of the
workstations, switching on another lamp and pulling out their first
aid kit.

“Well, this will do,” he said, grabbing a bandage
and a small bottle of hydrogen peroxide. Alva knew the drill pretty
well. She had apprenticed under Gruff more than seven years ago,
since a high school placement. He’d been bandaging her wounds ever
since.

Washing her hands carefully, she then dried them
gingerly on a clean towel, tossed it in the laundry basket and
turned, wounded hand towards Gruff.

Blood trickled lazily from the wound. Gruff smiled.
“Been a while since we’ve done this. Not since you got Big Bertha,
anyway.” Alva grinned and looked toward her tool belt, slung on a
peg on the wall. Her modified wrench, almost two feet longer than a
regular one, hung from it.

She hissed when he poured the hydrogen peroxide on
the wound, the blood now covered in bubbling white foam. He ripped
open a small alcohol covered swatch and wrapped it around the wound
before Alva could complain.

He grinned. “Can never be too careful.”

She glared at him as he finished up, pulling the
swab off to examine the wound. His eyebrow shot up. “I ain’t never
seen a bite like this. You said a rat did it?”

He bandaged her finger and shook his head. “Well,
rats ain’t good for business, and neither are any other biting
critters. We’ll have to call the exterminators in for the weekend,
just in case. Can’t afford to close the shop for too long – don’t
wanna scare folk back to their swindling dealerships. Let’s call it
a night, Al. You close up here.”

Alva knew better than to argue. Gruff was a good
man, but he expected his employees, even his favourite one, to fall
in line. He shambled off to the back, banging the cabinets closed
and locking them. Alva turned back to her bench. Might as well put
the watch away. It wasn’t really worth much, with a broken face and
rusted cover, which was why she’d been able to afford it to
practice on. But it was priceless as a learning tool.

Something caught her eye, a dull silver glow on the
ground. She leaned down and saw, near a drop of her blood, the tiny
gear, in perfect view, as though it had just rolled itself out from
under the bench and now waited for her.

Her key was barely in the lock when Mrs. Gallaway
opened her door. Her wizened eyes peeked left and then right,
sharpening their focus on Alva, her face wrinkling from every
edge.

“There was someone looking for you, Alva,” she
whispered conspiratorially. “A handsome lad! A gentleman
caller!”

Alva managed a smile for the old lady’s sake. Mrs.
Gallaway suffered from a nasty combination of insomnia, loneliness
and chattiness. Alva was tired and doubted this “gentleman caller”
was looking for more than to try and sell her a new set of kitchen
knives. Not that she’d really know what to do with those.

“Thanks, Mrs. Gallaway.” Alva perked up her voice
and looked off with a dreamy look in her eyes. “I’ll go dress in my
ball gown now and wait for my prince charming!”

Mrs. Gallaway cackled and waved Alva off as she
closed her door, her laughter assailed by coughs. Alva grinned and
put the key in the deadbolt. She turned it, but the familiar
releasing thunk didn’t occur.

Could she have forgotten to set it? No, of course
not. Locking the deadbolt was second nature.

She backed away, placing her keys between her
fingers for a quick, easy weapon. Crude, but capable of inflicting
lots of damage if necessary. She wasn’t weak and knew she could put
up a fight. Unless they had a gun, of course, and blew her head off
before she could reach them. But in her little town, that wasn’t
too likely to happen.

Her feet firmly planted, she opened the door
carefully. If anyone was in her apartment, they knew she was here
now. Changing her tactic, she slammed the door open in case someone
waited for her behind it. The door bounced off the wall and she
caught it with her booted foot, quickly turning to face the
kitchen. It was empty, but someone had opened all of the drawers.
She thought of stepping back and calling the cops, but she was
already here and if those bastards were still here, she wanted to
give them a piece of her mind. And fists.

She ignored the barely used kitchen, which she kept
clean and sparse. It was definitely empty. She turned back to the
corridor and faced her living room/dining room/bedroom — a rather
small room for its multiple purposes.

No one was there. The lights were all switched on,
casting large shadows on her scattered belongings. They’d been
there in the past two hours, after the sun had set. She stepped
over her stuff and reached the converted closet Pete used for her
room. It was also in shambles, her books scattered. Alva picked up
her sister’s favourite books on legends and myths, relieved they
weren’t damaged, and carefully placed them back on the small wall
shelf.