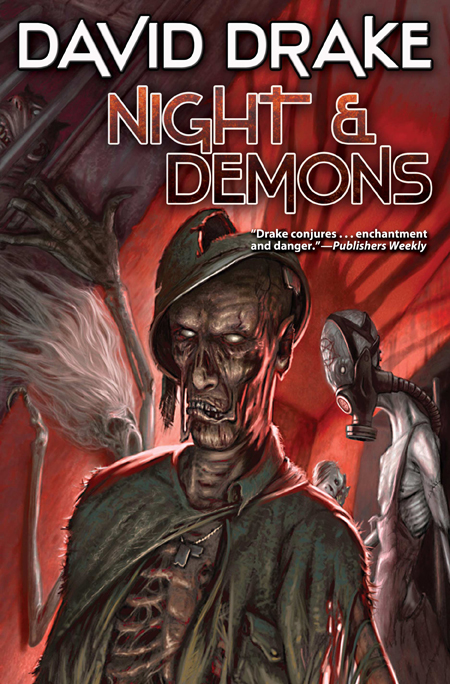 The Far Side of the Stars

The Way to Glory

When the Tide Rises

In the Stormy Red Sky

The Road of Danger

Caught in the Crossfire

All the Way to the Gallows

The Chosen
with S.M. Stirling

The Reformer
with S.M. Stirling

The Tyrant
with Eric Flint

The Heretic
with Tony Daniel

The Belisarius Series with Eric Flint

Belisarius I: Thunder Before Dawn
(omnibus)

T
he Tide of Victory

The World Turned Upside Down

Copyright © 2012 by David Drake. A shorter version of this volume appeared in 2007 as
Balefires
.

“Denkirch” © 1967 by David Drake; first published in
Travelers by Night
.

“Arclight” © 1973 by David Drake; first published in
The Magazine of Fantasy and Science Fiction
, April 1973.

“Something Had to Be Done” © 1975 by David Drake; first published in
The Magazine of Fantasy and Science Fiction
, February 1975.

“The Hunting Ground” © 1976 by David Drake; first published in
Superhorror
.

“Children of the Forest” © 1976 by David Drake; first published in
The Magazine of Fantasy and Science Fiction
, November 1976.

“Than Curse the Darkness” © 1980 by David Drake; first published in
New Tales of the Cthulhu Mythos.

“The False Prophet” © 1989 by David Drake; first published in
Vettius and Friends.

“The Elf House” © 2004 by David Drake; first published in
Masters of Fantasy
.

“A Land of Romance” © 2005 by David Drake; first published in
The Enchanter Completed
.

I was born in Dubuque, Iowa, and at age ten moved with my family to Clinton, fifty miles south along the Mississippi River. Outsiders tend to think of Iowa as flat. Much of the state is, but where I come from the bluffs rise straight up out of the river. Dubuque has an operating cable car (funicular railway) that a wealthy banker built to carry him from his office in the floodplain to his home on the bluffs 300 feet above. The view out over the river into Illinois is spectacular.

Others thought so too. All over the area are Amerind grave mounds looking down from the bluffs. One of them’s on the farm that belonged to my father-in-law.

My dad was an electrician, but nobody in Iowa is very far from a farm. Family friends had farms when I was a boy; my wife’s family were and are dairy farmers. I’ve spent enough time on and around some of the most productive family farms in the world to have a feeling for the life.

Which is very, very hard. The work has to be done every day, no matter how you feel or what the weather’s doing: you can’t call in sick and tell the cows that they won’t be milked this morning. The machinery is dangerous beyond the imagination of a modern factory worker; the organo-phosphate insecticides were invented just in time for World War II, where they provided the Nazis with the first nerve gases; and even city-dwellers know that if anybody gets rich from agriculture, it isn’t the family farmer.

The characters in this story are modeled on real people but they’re not my in-laws. The farm is one my in-laws owned, including details like the curio cabinet and the hunting rifle.

I frequently use a story that has greatly impressed me as a model for one of my own. This isn’t quite so direct a case as some, but I want to mention the similarities to Theodore Sturgeon’s “Killdozer.” The title (which was the genesis of the story) comes from Robert Browning’s “Childe Roland to the Dark Tower Came.”

A
s he swung the tractor for a final pass across Sac Ridge Field, Deehalter saw that dirt had been turned on the side of the Indian mound. The big man threw in the hand clutch of the Allis-Chalmers and throttled the diesel back to idle as he glared at the new trench through the barbed wire. “That goddam Kernes,” he whispered. “If I’ve got to work with him much longer . . . .”

He revved the engine and slammed the tractor back in gear. The farmer’s scowl was as black as the hair curling up his arms from the backs of his hands to the shirtsleeves rolled at his biceps.

At the south end of the field, Deehalter raised the cultivator and drove the Allis down the long, looping trail back to the farm buildings. There was a way of sorts straight west from the top of the ridge, but it was too steep for the tractor. The more gradual slope took Deehalter through half a dozen gates and eventually back to the buildings from the southwest. To the left loomed the barn and the three concrete silos peering over its roof at him. The milking parlor was a one-story addition to the barn’s east side, facing the equipment shed and the gas pump. And at the pump was Tom Kernes with his ten-year old son, Deehalter’s nephew, putting gas in the jeep.

Deehalter pulled up beside them and let the diesel clatter for a moment before he shut it off. Kernes, a short, ginger-headed man, looked up. His arms were not tan but a deep red, with brighter slashes where the straps of his undershirt had interrupted part of the sunlight. Kernes was thirty-five, five years younger than his brother-in-law, but his crinkly, sunburned face would have passed for any age. “Finish Sac Ridge already, Dee?” he asked in his pleasant, throaty voice. The tension in his muscles showed that he had correctly read Deehalter’s anger.

“Kernes, what’ve you been doing with the Indian mound?” the bigger man demanded from the tractor seat. “You know to leave that the hell alone!” A pick and shovel lay in the back of the jeep. Deehalter noticed them and a black flush moved across his face.

Kernes’s skin was too red to show the blood, but his voice rose to the challenge. “When Old John owned the farm, he could say what he pleased; but he’s dead now. I’m damned if I’m not going to get an Indian skull like yours.” Gesturing eastward at the ridge, the little man added, “I own half this goddam place and I’m going to get a skull.”

The curio cabinet in Deehalter’s parlor had been assembled by his grandfather before the first world war. Among its agates and arrowheads, sword-cane and ostrich plumes, was a brown human skull. The family had always assumed the skull came from a mound somewhere, but not even Old John had been sure. It fascinated Kernes, perhaps only because Deehalter had refused to give it to him. The main house and its furnishings, including the cabinet, had gone to Deehalter under his father’s will—just as the new house in which his sister Alice lived with Kernes and their children had gone to her. The rest of the six-hundred-acre farm was willed to Deehalter and Alice jointly, with the provision that if either of them tried to partition the property, the whole of it went to the other. Deehalter had talked to a lawyer and he was sure Kernes had done the same. The worst news either of the men had heard in a long time was that the will would probably stand up in court.

Babel Found by Matthew James
Nun But The Brave (A Giulia Driscoll Mystery Book 3) by Alice Loweecey
Psi Another Day (Psi Fighter Academy) by D.R. Rosensteel
The Devil in Canaan Parish by Jackie Shemwell
One Tuesday Morning by Karen Kingsbury
Shadows of Death by H.P. Lovecraft
Murder on the Red Cliff Rez by Mardi Oakley Medawar
Dylan's Visions of Sin by Christopher Ricks
Being Emma by Jeanne Harrell
Phoenix Noir by Patrick Millikin
Our partner