Night of the Storm: An Epic Fantasy Novel (The Eura Chronicles Book 2) 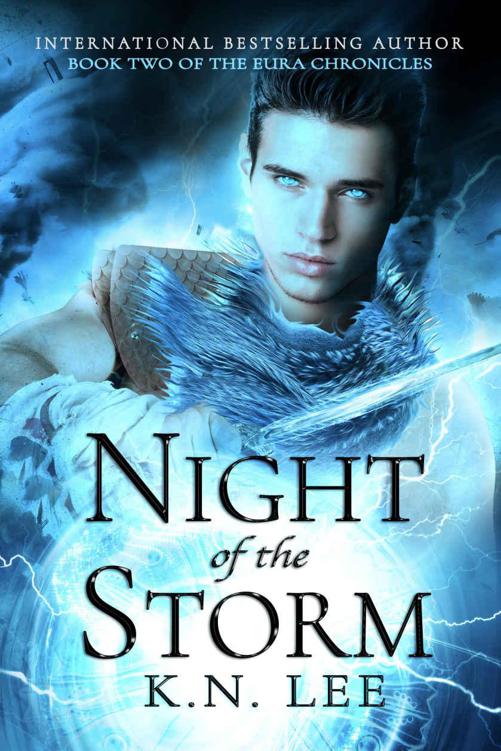 way that suggests that they endorse you or your use of the work).

Dedicated to Simi and Sohana

Accuracy—increased precision when using a weapon

Breath—prominent trait: the ability to breathe underwater and bestow the power to do so to others temporarily

Hypnosis—the ability to hypnotize others with their eyes

Mock—the ability to manipulate the prominent trait of every race

Enchant—prominent trait: the ability to make weapons or items stronger and more powerful

Blessed shield—a shield of energy that protects its user

Mind Telling—the ability to read the thoughts of others

Heal—prominent trait: the ability to heal wounds with energy power

Soothe—the ability to calm others, including animals

Agility—prominent trait: the ability to climb and increased balance

Accuracy—increased precision when using a weapon

Shift—the ability to change into an animal

Camouflage—the ability to blend into their surroundings

The one Dragnor had hunted for almost eighteen years.

Master was not pleased.

Dragnor looked up at the night sky, still frozen in awe by the amount of power his prisoner had displayed in that very courtyard just seconds ago.

“I knew this would happen,” he whispered as she vanished from his sight like a shooting star.

His sharp glare stared at the disturbed clouds. He just let his only bargaining tool escape.

The eerie voice made Dragnor’s body stiffen with dread. As if he were all around him, Wexcyn came to him like a monster in a dream.

The world went dark. Nearly a hundred palace guards surrounded Dragnor, and yet he was the only one to notice the strange darkness that smothered him like a blanket.

A god, even a forgotten one imprisoned by the other gods—could do remarkable things.

“I brought you back from the dead. I gave you power,”
Wexcyn said. Far away in his prison, the forgotten god could still reach his agents.

And there were many.

There was nowhere to hide.

“The Cursed is still yours to command,” Dragnor said, his eyes searching for a way out of the darkness that threatened to force him to his knees.

Escape. If only he could fly away, the way Lilae had just done. Too late for second thoughts. Dragnor’s life—his soul—belonged to Wexcyn.

“I have weakened the emperor with a potion that will leave him vulnerable to The Horrors and bend him to our will once more.”

“You have done nothing but prove that Emperor Kavien cannot be controlled.”

“But he can, Master. The Flame’s influence over Emperor Kavien was only a temporary setback. I can fix this.”

“Dragnor,” Wexcyn hissed. His voice made the fine hairs on Dragnor’s arm stand on end.

“Find the Storm, Flame, Inquisitor, Seer, and Steel and any other person that dares to defy me, and kill them. I swear this is your last chance. Do you understand?”

“Fail me again and I will let Vaugner have you. Do you know what he does to those that escape the Underworld?”

The thought of being sent back to the Underworld, into enemy hands, frightened Dragnor into silence. He’d just escaped the clutches of Vaugner, the Elder that wanted him ripped from the living world. He would have gotten on his knees and begged if he wasn’t standing in the presence the Avia’Torenan soldiers and guards.

Until Emperor Kavien was awakened, Dragnor would rule in his stead.

“I will find them and kill them all.”

There was no further reply. As Dragnor stood in fear, awaiting Wexcyn’s voice, the darkness was lifted, and the world was bright with torches and moonlight once again.

“Clear out. Search the entire city for the slave,” Dragnor ordered.

The soldiers and guards cleared the courtyard, going in sectioned troupes to search for the missing slave. Lilae would be halfway across the realm by now, but he had to at least try.

If he had to mount his wyvern, Tari and fly to every kingdom in Eura, Dragnor would do so. He’d done it before. He’d do it again to keep his place in Wexcyn’s new world order.