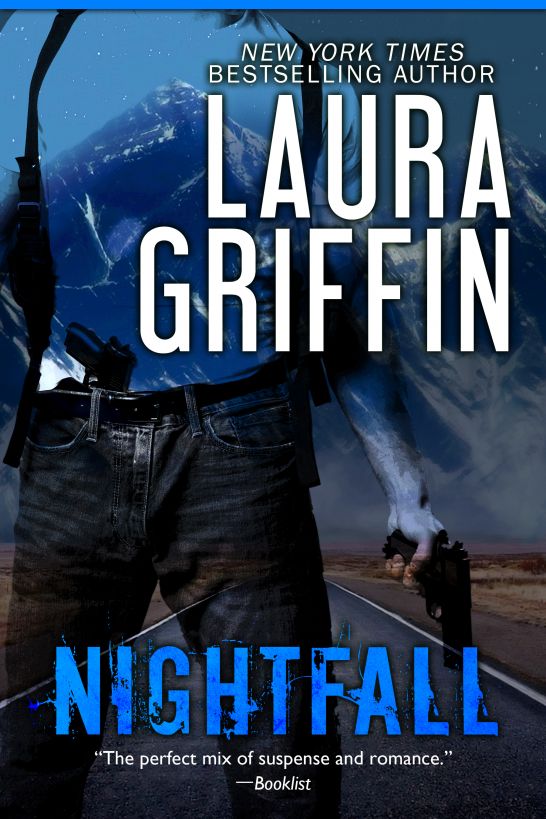 Published by Laura Griffin
at Smashwords

This ebook is licensed for
your personal enjoyment only. This ebook may not be re-sold or
given away to other people. If you would like to share this book
with another person, please purchase an additional copy for each
person. All characters in this book are fiction and figments of the
author’s imagination.
www.lauragriffin.com

What she should have
done—what she’d
almost
done—was gone to the Mickey D’s drive-thru, ordered an
extra-large cup of coffee, and resumed her journey. But instead,
she’d caved. And now the decadent combination of warm fruit and
flaky golden crust, just like her grandmother used to make, was
going kill her.

I’m too young to
die
, she thought as she eased her foot off
the accelerator and resisted the urge to fight the skid. She’d
driven in icy conditions countless times and before this moment,
she’d never lost control of a vehicle.

But then again, before this
moment, she’d never settled in for an evening road trip with a
giant dessert dulling her senses and a monotonous stretch of
highway in front of her, without even a radio to keep her
company.

Holly’s hands gripped the
wheel. She braced for impact. Despite her best efforts, her foot
jabbed the brake in an uncontrollable last-ditch attempt to stop
the inevitable. Metal crunched. A giant wall of branches came at
her and her head whipped forward—
thunk!
—into the steering
wheel.

Seconds or minutes ticked
by. She opened her eyes to find herself surrounded by a dark cocoon
of foliage. The van was eerily silent. She tasted something warm
and coppery. She touched her finger to her lip and looked around
dazedly.

The silence was drowned out
by a roaring in her head as she processed what had happened. She’d
careened off the road. She’d wrecked the company van. And not only
that—she’d wrecked it on a seldom-used road just before dusk on an
evening when every weatherman in the state of Montana was
predicting snow.

Holly’s heart flip-flopped
as she looked around once more. What little daylight remained was
blocked out by the branches smashed against the windows, and the
only illumination was coming from the dashboard. Her gaze landed on
the shadowy shape of her purse, which had tumbled to the floor. She
reached for it and felt a sharp pain as the seatbelt bit into her
skin once again.

Holly unbuckled herself and
felt around for the bag. The contents had spilled out, but it
didn’t take her long to grope through the clutter and locate her
phone. She clutched it in her hand and it lit up, creating a bluish
glow in the front seat.

Relief swamped her. But it
quickly vanished as she jabbed her thumb against the screen and saw
only the slightest hint of a bar. No signal.

Holly tried to open her
door, but the branches pinned it shut. She threw her shoulder
against it and managed to force it open. Sticks and pine needles
clawed at her as she wedged herself out, but the relative light
outside the van made her feel better. She took a deep breath and
tried to calm her racing heart. It wasn’t dark yet. She still had
time to wave someone down. Surely, someone else would be traveling
between Eulee and White Falls on this chilly November
evening.

Wind whipped through her
long-sleeve T-shirt, and she reached inside for her green ski vest.
She shrugged into it and gazed down at her phone again.

She looked around to assess
the damage. She’d plowed through the guardrail and landed
nose-first in a ditch. Her front tire looked punctured. How had
that happened? Not that it mattered. Although the incline wasn’t
steep, there was still no way she was driving out of here. This
definitely called for a tow truck.

I am so
screwed
.

Holly gazed at the crumpled
bumper. Tears stung her eyes, but she blinked them back as she
looked around. She was in a valley between two foothills. To the
east, where the valley widened and mountains rose up on either
side, was Eulee. To the west, through a twisty mountain pass, was
White Falls. She remembered a ranch a few minutes back and set out
in that direction. She glanced at the phone again.

Holly felt a rush of relief
and immediately dialed her sister, praying the signal wouldn’t
vanish before the call went through. Her sister could get on the
phone with the client and make excuses while Holly figured out how
to get a tow truck out here.

She dropped to her knees
beside the road. What the
hell?
Who would be stupid enough shoot a rifle so close
to—

Her chin hit pavement. She
darted her gaze around. The smell of wet asphalt filled her
nostrils as panic spurted through her.

That was no careless hunter.
Someone was shooting at
her.

Holly scrambled to her knees
and lunged for the ditch. She ducked her head down and crawled
frantically for the safety of the van. But as she scuttled behind
it, she realized it wasn’t safe at all.

A loud
ping
rang out as the next shot hit the
bumper.

Someone’s trying to kill
me!
Her breath came in ragged gasps. She
glanced around. Where could she go? She couldn’t just sit here and
wait for someone to walk up on her. She jumped across the narrow
ravine and plunged into the thicket. She batted away leaves and
branches until she was deep within the woods, sheltered by darkness
and trees.

What is going on? Why is
this happening?
Panic seized hold of her as
she darted between thick tree trunks. The forest was dense and
damp. The floor had escaped the season’s first snow. But the trees
that had blocked the snow blocked light, too, and Holly could
hardly see anything as she plowed deeper and deeper into the woods.
Her heart galloped inside her chest. Branches stabbed at her,
ripping at her clothes, her hair. She used her arms like a swimmer,
ignoring the stinging cuts as she swiped desperately at the brush.
Her toe caught a rock. She pitched headfirst into a void. White-hot
pain exploded inside her head.

“
What do you mean it didn’t
happen?”

Colin Denton gritted his
teeth as his headlights sliced through the falling darkness. “I was
there almost two hours. He didn’t show.”

Silence on the other end.
Colin glanced at the phone in the cup holder to make sure the
connection hadn’t dropped.

Colin smiled ruefully, but
of course, there was no one there to see him. He was alone in his
pickup. He was alone on the road. He was alone in this isolated
corner of Montana, as he had been for the past five months. Colin
was a loner by nature, but the constant isolation was starting to
get to him, and it wasn’t even full-on winter yet.

Next operation, he was
thinking about getting a dog.

“
I say we sit tight,” he
answered, scanning the roadway for ice. It had gotten into the
forties today, but the temperature was sinking fast and it had
started to snow. “Hooks doesn’t get paid until he delivers the
goods. Something spooked him tonight, but he’ll reschedule. Believe
me, he needs the money.”

“
And you’re sure you got the
place right?”

The truck skidded as Colin
hit a patch of ice. His shoulders tensed until he felt the tires
grip asphalt again. He checked his rearview mirror, but no one was
behind him.

In his peripheral vision, he
saw a flash of metal. He glanced to the side as he sailed past the
back end of a white van.

“
No freaking way,” he
muttered, tapping the brakes.

Colin eased onto the
shoulder and rolled to a stop about forty yards in front of the
van. He checked the rearview mirror. He considered his hazard
lights, but opted for dark instead. He slipped the Glock from his
holster and climbed out of the truck.

Colin darted his gaze around
as he approached the vehicle, which had obviously slid off the
road—probably after hitting the same patch of ice as he had. At
least, he hoped that was why it had gone off the road. Any other
reason—assuming this van belonged to Hooks—was going to mean
problems.

His boots crunched over the
inch of snow that had already accumulated on the shoulder. It was
really coming down now, and he could hardly see shit. He had a
mini-Maglite in his pocket, but he made his way by feel, trusting
his feet to tell him where the asphalt was. After ten paces, he
paused to listen. No sound but the faint whistle of wind through
the forest on either side of him.

Thirty more paces. He
switched on the flashlight and aimed it at the cargo van in the
ditch. He checked the driver’s window. No one inside. He studied
the exterior. It was an old model—probably mid-eighties. The front
end was crumpled against the embankment and a dusting of snow
covered the hood, which told him the engine had cooled. He shifted
the light and saw the guardrail that had once lined the curve in
the roadway. Now it lay twisted in the ditch behind the
van.

Colin’s phone vibrated in
his pocket, but he ignored it. He tromped around the back. He
hadn’t seen any people, but more importantly, he hadn’t sensed any.
His sharply honed instincts told him he was alone out here. Whoever
had been driving this thing had been picked up by another vehicle
or possibly gone for help—probably picked up, as going anywhere in
this weather was stupid without a serious coat and a thorough
knowledge of the area.

Colin stopped again to
listen. He reached for the handle of the cargo door and was
surprised to find it unlocked. Gripping his pistol in his right
hand, he pulled open the door, making sure to stand behind it so it
could act as a shield.

No sound. No hint of
movement. He aimed the flashlight inside the van, where he expected
to see a shit ton of firearms.

He saw flowers. Boxes and
boxes brimming with bouquets. The perfume overwhelmed him as he
stepped up to the bumper and shined the light over the sea of pink
and yellow and orange blooms.

A noise. Colin whirled
around. He recognized the snippet of pop music. It came again, and
he spotted a faint purple glow beneath a layer of white. He picked
up the cell phone and shook off the snow. The caller ID showed a
Bozeman area code. Colin scrolled through the call history—all
Bozeman numbers—and a text came in:
Holly!!Where RU? Call me ASAP.

Colin tucked the phone into
his pocket and re-holstered his weapon. He muttered a curse as he
swung the flashlight around in an arc. No sign of Holly, and he
hoped to hell she hadn’t tried to hike out of here in this weather.
He returned to the front of the van and he noticed the dark smear
near the door handle.