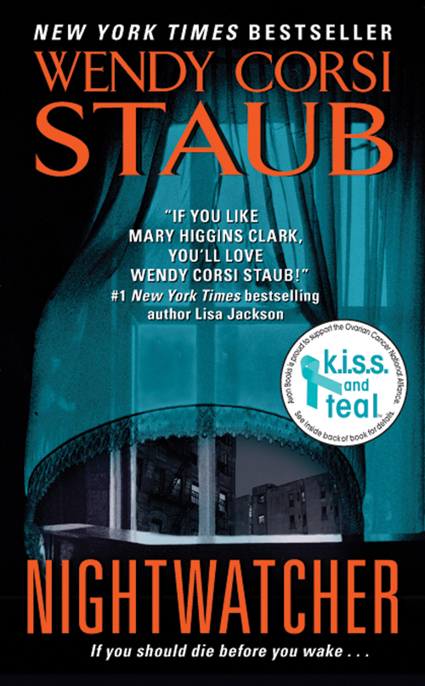 In memory of the thousands of innocent souls lost on September 11, 2001, and in honor of my beloved New York, the greatest city in the world.

And again, always,
always,
for Mark, Morgan, and Brody, with love.

Special thanks to Barbara Mayes Boustead, Judy McCormick, John McNamara, Karen Sirignano, and Dave Turkheimer; and especially to my agent, Laura Blake Peterson & the gang at Curtis Brown, and my editor, Lucia Macro & the gang at Avon Books/HarperCollins.

This is a work of fiction. While certain names, places, and events are real and/or based on historical fact, the plot and narrative action depicted within are strictly products of the author’s imagination.

An Excerpt from
Sleepwalker

I fear that all we have done

is awaken a sleeping giant

and fill him with a terrible resolve.

Vic Shattuck clicks the mouse, and the Southside Strangler file—the one that forced him to spend the better part of August in the rainy Midwest, tracking a serial killer—disappears from the screen.

If only it were that easy to make it all go away in real life.

“If you let it, this stuff will eat you up inside like cancer,” Vic’s FBI colleague Dave Gudlaug told him early in his career, and he was right.

Now Dave, who a few years ago reached the bureau’s mandatory retirement age, spends his time traveling with his wife. He claims he doesn’t miss the work.

“Believe me, you’ll be ready to put it all behind you, too, when the time comes,” he promised Vic.

Maybe, but with his own retirement seven years away, Vic is in no hurry to move on. Sure, it might be nice to spend uninterrupted days and nights with Kitty, but somehow, he suspects that he’ll never be truly free of the cases he’s handled—not even those that are solved. For now, as a profiler with the Behavioral Science Unit, he can at least do his part to rid the world of violent offenders.

He looks up to see Special Agent Annabelle Wyatt. With her long legs, almond-shaped dark eyes, and flawless ebony skin, she looks like a supermodel—and acts like one of the guys.

She briskly hands Vic a folder. “Take a look at this and let me know what you think.”

Yeah, right. With Annabelle, everything is urgent.

“Unless you were leaving . . .” She pauses, obviously waiting for him to tell her that he’ll take care of it before he goes.

Without even glancing at the file, Vic puts it on top of his in-box. The day’s been long enough and he’s more than ready to head home.

Kitty is out at her book club tonight, but that’s okay with him. She called earlier to say she was leaving a macaroni and cheese casserole in the oven. The homemade kind, with melted cheddar and buttery breadcrumb topping.

Better yet, both his favorite hometown teams—the New York Yankees and the New York Giants—are playing tonight. Vic can hardly wait to hit the couch with a fork in one hand and the TV remote control in the other.

“All right, then.” Annabelle turns to leave, then turns back. “Oh, I heard about Chicago. Nice work. You got him.”

Annabelle shrugs. “How about
it
?”

Over the course of Vic’s career, he hasn’t seen many true cases of MPD—multiple personality disorder—but this was one of them.

The elusive Southside Strangler turned out to be a woman named Edie . . . who happened to live inside a suburban single dad named Calvin Granger.

Last June, Granger had helplessly watched his young daughter drown in a fierce Lake Michigan undertow. Unable to swim, he was incapable of saving her.

Weeks later, mired in frustration and anguish and the brunt of his grieving ex-wife’s fury, he picked up a hooker. That was not unusual behavior for him. What happened after that
was
.

The woman’s nude, mutilated body was found just after dawn in Washington Park, electrical cable wrapped around her neck. A few days later, another corpse turned up in the park. And then a third.

Streetwalking and violent crime go hand in hand; the Southside’s slain hookers were, sadly, business as usual for the jaded cops assigned to that particular case.

For urban reporters, as well. Chicago was in the midst of a series of flash floods this summer; the historic weather eclipsed the coverage of the Southside Strangler in the local press. That, in retrospect, was probably a very good thing. The media spotlight tends to feed a killer’s ego—and his bloodlust.

Only when the Strangler claimed a fourth victim—an upper-middle-class mother of three living a respectable lifestyle—did the case become front-page news. That was when the cops called in the FBI.

For Vic, every lost life carries equal weight. His heart went out to the distraught parents he met in Chicago, parents who lost their daughters twice: first to drugs and the streets, and ultimately to the monster who murdered them.

The monster, like most killers, had once been a victim himself.

It was a textbook case: Granger had been severely abused—essentially tortured—as a child. The MPD was, in essence, a coping mechanism. As an adult, he suffered occasional, inexplicable episodes of amnesia, particularly during times of overwhelming stress.

He genuinely seemed to have no memory of anything “he” had said or done while Edie or one of the other, nonviolent alters—alternative personalities—were in control of him.

“By the way,” Annabelle cuts into Vic’s thoughts, “I hear birthday wishes are in order.”

Surprised, he tells her, “Actually, it was last month—while I was in Chicago.”

“Ah, so your party was belated, then.”

His party. This past Saturday night, Kitty surprised him by assembling over two dozen guests—family, friends, colleagues—at his favorite restaurant near Dupont Circle.

Feeling a little guilty that Annabelle wasn’t invited, he informs her, “I wouldn’t call it a
party
. It was more like . . . it was just dinner, really. My wife planned it.”

But then, even if Vic himself had been in charge of the guest list, Supervisory Special Agent Wyatt would not have been on it.

Some of his colleagues are also personal friends. She isn’t one of them.

It’s not that he has anything against no-nonsense women. Hell, he married one.

And he respects Annabelle just as much as—or maybe even more than—just about anyone else here. He just doesn’t necessarily
like
her much—and he suspects the feeling is mutual.

“I hear that it was an enjoyable evening,” she tells him with a crisp nod, and he wonders if she’s wistful. She doesn’t sound it—or look it. But for the first time, it occurs to Vic that her apparent social isolation might not always be by choice.

He shifts his weight in his chair. “It’s my wife’s thing, really. Kitty’s big on celebrations. She’ll go all out for any occasion. Years ago, she threw a party when she potty trained the twins.”

As soon as the words are out of his mouth, he wants to take them back—and not just because mere seconds ago he was insisting that Saturday night was
not
a party. Annabelle isn’t the kind of person with whom you discuss children, much less potty training them. She doesn’t have a family, but if she did, Vic is certain she’d keep the details—particularly the bathroom details—to herself.

After Annabelle bids him a stiff good night and disappears down the corridor, Vic shifts his gaze to the framed photos on his desk. One is of him and Kitty on their twenty-fifth wedding anniversary last year; the other, more recent, shows Vic with all four of the kids at the high school graduation last June of his twin daughters.

The girls left for college a few weeks ago. He and Kitty are empty-nesters now—well, Kitty pretty much rules the roost, as she likes to say, since Vic is gone so often.

“So which is it—a nest or a roost?” he asked her the other day, to which she dryly replied, “Neither. It’s a coop, and you’ve been trying to fly it for years, but you just keep right on finding your way back, don’t you.”

She was teasing, of course. No one supports Vic’s career as wholeheartedly as Kitty does, no matter how many nights it’s taken him away from home over the years. It was her idea in the first place that he put aside his planned career as a psychiatrist in favor of the FBI.

All because of a series of murders that terrorized New York thirty years ago, and captivated a young local college psych major.

“Back when I first met him, Vic was obsessed with unsolved murders,” Kitty announced on Saturday night when she stood up to toast him at his birthday dinner, “and since then, he’s done an incredible job solving hundreds of them.”

Years ago, the New York killings stopped abruptly. Vic would like to think it’s because the person who committed them is no longer on this earth.

If by chance he is, then he’s almost certainly been sidelined by illness or incarceration for some unrelated crime.

After all, while there are exceptions to every rule, most serial killers don’t just stop. Everything Vic has learned over the years about their habits indicates that once something triggers a person to cross the fine line that divides disturbed human beings from cunning predators, he’s compelled to keep feeding his dark fantasies until, God willing, something—or someone—stops him.

In a perfect world, Vic is that someone.

But then, a perfect world wouldn’t be full of disturbed people who are, at any given moment, teetering on the brink of reality.

Typically, all it takes is a single life stressor to push one over the edge. It can be any devastating event, really—a car accident, job loss, bankruptcy, a terminal diagnosis, a child’s drowning . . .

Stressors like those can create considerable challenges for a mentally healthy person. But when fate inflicts that kind of pressure on someone who’s already dangerously unbalanced . . . well, that’s how killers are born.

Though Vic has encountered more than one homicidal maniac whose spree began with a wife’s infidelity, the triggering crisis doesn’t necessarily have to hit close to home. Even a natural disaster can be prime breeding ground.

A few years ago in Los Angeles, a seemingly ordinary man—a fine, upstanding Boy Scout leader—went off the deep end after the Northridge earthquake leveled his apartment building. Voices in his head told him to kill three strangers in the aftermath, telling him they each, in turn, were responsible for the destruction of his home.

And sometimes, they’re suffering from a mental disorder that plenty of people—including some in the mental health profession—don’t believe actually exists.

Before Vic left Chicago, as he was conducting a jailhouse interview with Calvin Granger, Edie took over Calvin’s body.