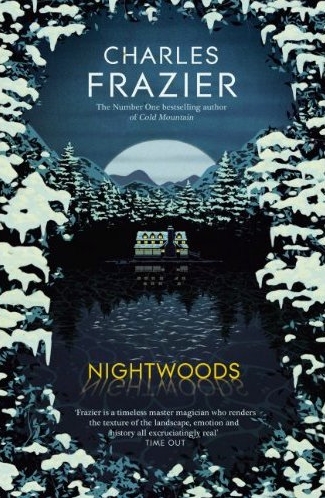 Nightwoods
is a work of fiction. Names, characters, places, and incidents are the products of the author’s imagination or are used fictitiously. Any resemblance to actual events, locales, or persons, living or dead, is entirely coincidental.

Jacket design: David Stevenson, based on a photograph © Marshall Shunk

You can’t even cross a river
Without having to pay a toll
. 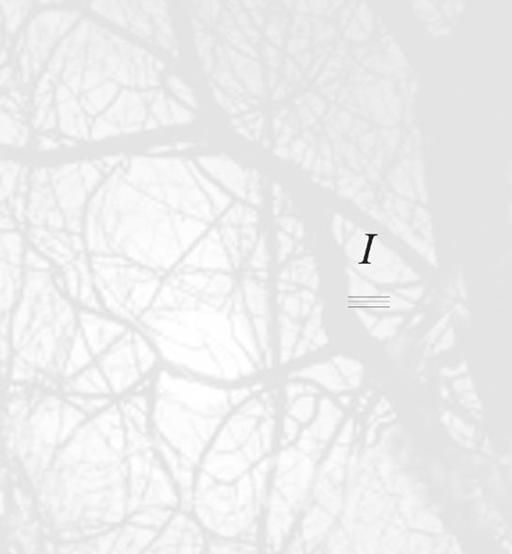 L
UCE’S NEW STRANGER CHILDREN
were small and beautiful and violent. She learned early that it wasn’t smart to leave them unattended in the yard with the chickens. Later she’d find feathers, a scaled yellow foot with its toes clenched. Neither child displayed language at all, but the girl glared murderous expressions at her if she dared ask where the rest of the rooster went.

The children loved fire above all elements of creation. A heap of dry combustibles delighted them beyond reason. Luce began hiding the kitchen matches, except the few she kept in the hip pocket of her jeans for lighting the stove. Within two days, the children learned how to make their own fire from tinder and a green stick bowed with a shoelace. Tiny cavemen on Benzedrine couldn’t have made fire faster. Then they set the back corner of the Lodge alight, and Luce had to run back and forth from the spring with sloshing tin buckets to put it out.

She switched them both equally with a thin willow twig until their legs were striped pink, and it became clear that they would draw whatever pain came to them down deep inside and refuse to cry. At which point Luce swore to herself she would never strike them again. She went to the kitchen and began making a guilty peach pie.

LUCE WAS NOT MUCH MATERNAL
. The State put the children on her. If she had not agreed to take them, they would have been separated and adopted out like puppies. By the time they were grown, they wouldn’t even remember each other.

Though now that it was probably too late to go back, maybe that would have been a good thing. Separate them and dilute whatever weirdness they shared and ignited between them. Yet more proof, as if you needed it, that the world would be a better place if every-damn-body didn’t feel some deep need to reproduce. But God in his infinite wisdom had apparently thought it was an entertaining idea for us to always be wanting to get up in one another.

Also, the children were here, and what was Luce to do? You try your best to love the world despite obvious flaws in design and execution. And you take care of whatever needy things present themselves to you during your passage through it. Otherwise you’re worthless.

Same way with the Lodge. Luce didn’t own it. She was the caretaker, sort of. Some would call her a squatter now that the old man was dead. But nobody else seemed interested in keeping it from growing over with kudzu until it became nothing but a green mound.

Back at the edge of the previous century, the Lodge had been a cool summer retreat for rich people escaping the lowland steam of August. Some railroad millionaire passing through the highland valley in his own railcar had a vision, or possibly a whim, to build an earthen dam, back the river up, fill the upper end of the valley with water right to the edge of the village. Then, on the far side, build a log lodge of his own design, something along the lines of the Old Faithful Inn, though smaller and more exclusive. He must have been a better railroad executive than architect, because what he built was a raw outsized rectangle, a huge log cabin with a covered porch looking down a sweep of lawn to the lake and across the water to the town. Evidently, rich people were satisfied by simpler things in the yesteryears.

Now the millionaires and the railroad were gone. But the lake remained, a weird color-shifting horizontal plane set in an otherwise convoluted vertical landscape of blue and green mountains. The Lodge persisted as well, a strange, decaying place to live in alone, though. The main floor was taken up by the common rooms, a voluminous lobby with its massive stone fireplace and handsome, backbreaking Craftsman armchairs and settles, quarter-sawn oak tables and cabinets. A long dining room with triple-hung, lake-view windows and, behind swinging doors, a big kitchen with a small table where the help once crowded together to eat leftovers. Second floor, just narrow hallways and sleeping chambers behind numbered six-panel doors with transom windows. Third floor, way up under the eaves, a dark smothering rabbit warren of windowless servants’ quarters.

WHEN SHE LIVED ALONE
, Luce didn’t go to the upper floors often, but not out of fear. Not really. It was little but bedsteads and cobwebs up there, and she didn’t want to believe in ghosts or anything similar. Not even the portents of bad dreams. Yet the fading spirit world touched her imagination pretty strong when she was awake at three in the morning, alone in the big place. The dark sleeping floors, with their musty transient pens and cribs for the guests and their help, spooked her. The place spoke of time. How you’re here and then you’re gone, and all you leave for a little while afterward are a few artifacts that outlive you.

Case in point, old Stubblefield, who had owned the Lodge for the past few decades. Luce visited him several times during his dying days, and she was there at the end to watch the light go out of his eyes. In the final hours, Stubblefield mostly cataloged his possessions and listed who should get what. His concerns were largely real estate, all his holdings to go to his sole useless grandson. Also a few valuable objects, such as his dead wife’s silver service and lace tablecloth, perfect but for a slight rust stain at one corner. Barely noticeable. The silver candleholders were a heavy weight on Stubblefield’s mind because his wife had loved them so much. Oddly, he left them to Luce, who didn’t love them at all and probably never would.

Easy to be disdainful and ironic toward others’ false values. Still, Luce hoped that when she was at the same thin margin of life she would be concerned with looking out the window to note the weather or the shape of the moon or some lone bird flying by. Certainly not a bunch of worn-out teaspoons. But Luce was half a century younger than old Stubblefield, and didn’t know how she’d think and what she would value if she made it that far down the road. All her life, the main lesson Luce had learned was that you couldn’t count on anybody. So she guessed you could work hard to make yourself who you wanted to be and yet find that the passing years had transformed you beyond your own recognition. End up disappointed in yourself, despite your best efforts. And that’s the downward way Luce’s thoughts fell whenever she went upstairs into the dreary past.

BEFORE THE CHILDREN
, Luce had learned that after dark she’d best keep to the communal lobby, with its fireplace and mildew-spotted furniture and tall full bookshelves and huge floor-standing radio with a tuning ring like the steering wheel to a Packard. She dragged a daybed from a screened sleeping porch to form a triangle of cozy space with the hearth and the radio to make herself a bedroom. The bookshelves held a great many well-read old novels and a set of Britannicas, complete but for a couple of volumes in the middle of the alphabet. Also, nearby, a Stickley library stand with an unabridged 1913 Webster’s. The places where you naturally put your hands on the soft binding were stained dark, so that all you could figure was that decades of guests finished a greasy breakfast of sausage biscuits and then right away needed to look up a word.

At bedtime, lamps out, the rest of the big room faded into darkness, only the fire and the radio’s tubes sending a friendly glow up the nearby log walls. Luce finally fell asleep every night listening to WLAC out of Nashville. Little Willie John, Howlin’ Wolf, Maurice Williams, James Brown. Magic singers proclaiming hope and despair into the dark. Prayers pitched into the air from Nashville and caught by the radio way up here at the mountain lake to keep her company.

Also good company on clear nights, the lights of town. Yellow pinpoints and streaks reflecting on the shimmer of black lake water. One advantage of the village being over there on the other side was the proximity of people as the crow flies, but no other way. By car, it took the better part of an hour to go around the back side of the lake and across the dam and around the shore to town.

Echoes of the Goddess: Tales of Terror and Wonder from the End of Time by Darrell Schweitzer
All the Shah’s Men by Stephen Kinzer
How to Read an Unwritten Language by Philip Graham
Xenofall (The Wasteland Chronicles, Book 7) by Kyle West
TOCABAGA (Revised Edition) (Book #1 of The Tocabaga Chronicles) by Ward, Thomas H.
Over the Edge by Stuart Pawson
Acceptable Risk by Robin Cook
The Rawhide Man by Diana Palmer
Wedding at Wildwood by Lenora Worth
Saving the Seal: A BWWM Navy Seal Interracial Romance by Cristina Grenier
Our partner