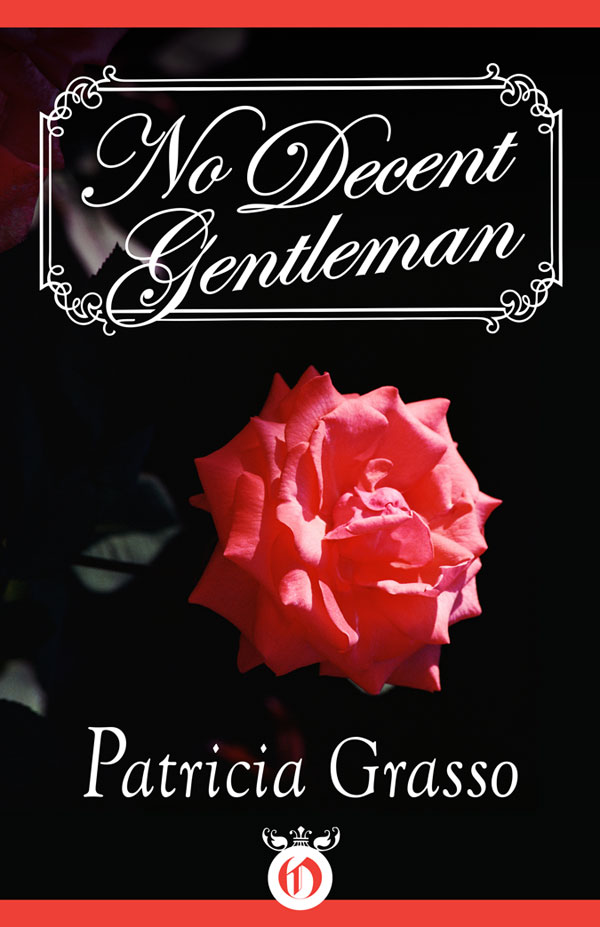 For Sharon Winn, my "best-only" friend.

She brushed a few recalcitrant wisps of copper hair away from her face and lowered herself wearily onto the Grecian chaise in the corridor outside Abingdon Manor's second-floor drawing room. After folding her hands in her lap, she lifted her green-eyed gaze from the hallway's blue and gold carpet runner to stare at the closed drawing room door. Anger and sorrow warred within her at the thought of what Vicar Dingle and his six cohorts were doing over her late father's body as they chanted prayers to drive the devil from his soul.

"This is unnecessary," Sabrina complained, turning to her companion. "Burying my father in the dark at a crossroads defies logical reason."

The twenty-five-year-old baron, Edgar Briggs, shifted his gaze to her. "Vicar Dingle is merely performing one of his duties," he said, sitting down beside her. "The law demands a night burial for suicides."

"My father did
not
commit suicide," Sabrina insisted, her emerald gaze glittering with her anger. "The law is as stupid as Vicar Dingle."

"The law is the law," Edgar replied, but softened his words by taking her hand in an obvious attempt to offer solace.

"The law is an arse," Sabrina snapped, yanking her hand from his. Giving him a look filled with accusation, she added, "If you really cared about our friendship, you wouldn't allow the vicar to insult my father like this. Apparently, my father's judgment in refusing your marriage proposal was correct. I would never wish to marry a man who wasn't loyal to me."

"Sabrina, I cannot prevent the vicar from obeying the law," the baron said in a weary voice. "Besides, your father would have agreed to my suit if you had told him you loved me instead of harboring a fondness for me."

"Love has nothing to do with offers of marriage or dowries," Sabrina told him. With a badly shaking hand, she smoothed the skirt of her black bombazine mourning gown and added, "Or meaningless declarations of one's feelings."

"I do love you, but even I cannot change the law to suit you," Edgar said, a frustrated edge creeping into his voice.

Ignoring his profession of love, Sabrina stared at the closed door again, but tried to keep her mind a blank. Her father's untimely passing was difficult to endure, and she needed to remain strong for the sake of her sister and her aunt. Trying to retain control of her rioting emotions, she concentrated on the various portraits lining the walls of the hallway.

"As an earl, my father enjoyed friendships with great peers of the realm," Sabrina said, her gaze fixed on the portrait of Prince Adolphus, the seventh son of King George III. "Vicar Dingle will rue the day he insulted the Savage family with such barbaric actions."

"None of those illustrious peers have ridden to Abingdon to champion your father's cause," the baron reminded her.

Surprised by his harshness, Sabrina rounded on him, but the drawing room door opened unexpectedly and drew her attention. Vicar Dingle stood there; behind him six parishoners were preparing to act as pallbearers.

"We are ready," Vicar Dingle said.

Sabrina stared at him for a long moment and tried to find a small sign of sympathy in his solemn expression. There was none. Finally, she nodded and turned to walk down the stairs to the reception foyer, where her younger sister and aunt were waiting. The baron followed behind her.

"The vicar is ready," Sabrina told them, reaching for her black cloak.

Seventeen-year-old Courtney Savage burst into tears. Aunt Tess put her arm around her younger niece and drew her close in an effort to console her.

Sabrina turned her gaze away from her weeping sister lest she, too, begin weeping. She watched the vicar descending the stairs, followed by the six pallbearers carrying her father's coffin.

"Please, don't hurt him," Sabrina said in an aching voice.

"Don't hurt him?" Vicar Dingle echoed in an indignant tone of voice. "For his suicide, the Earl of Abingdon's soul faces eternal damnation."

"May consumption catch you," Sabrina cursed the clergyman.

"Sabrina is grief-stricken," Edgar intervened, stepping between her and the vicar. "She doesn't know what she's saying."

Vicar Dingle nodded, then said, "I understand her sorrow, but breeding does tell."

Sabrina stepped back a pace as if she'd been struck. Would she and her sister never be able to escape the fact that they were the illegitimate issue ofâ Of whom, she had no idea.

"Sabrina is a well-bred young lady and does not deserve your insults," Sabrina heard her aunt Tess saying. "Apologize at once, Vicar Dingle."

"Lady Burke, lest you forget, I was here whenâ"

"My father legally adopted Sabrina and me," Courtney Savage interrupted with uncharacteristic assertiveness. "Now, get on with the funeral."

Turning to her younger sister, Sabrina smiled for the first time since their father's death the preceding day. "Are we going to bury my father tonight?" she asked the vicar. "Or shall we stand here and debate the possibilities of who my natural parents were?"

"Extreme grief rules your tongue," Vicar Dingle stated disapprovingly and then marched out of the mansion. Lifting the casket again, the six pallbearers followed him outside.

"Your rudeness to a man of the cloth surprises me," the baron said in a loud whisper. "And you, Courtney. I never would haveâ"

"Oh, Edgar, do be quiet," Sabrina cut his words off. At times, her lifelong neighbor and friend annoyed her more than a toothache.

Pulling the hood of her black cloak up to cover her head, Sabrina followed the pallbearers outside. Behind her walked Courtney, Aunt Tess, and Edgar Briggs.

Sabrina stepped into an unusually warm mid-December night and breathed deeply. The air was hushed as if nature itself mourned the loss of her father. No moon shone overhead. The sky was a black velvet blanket dotted with tiny stars.

In silence, the pallbearers set the late earl's coffin on a cart pulled by one horse. Each of them held a lantern to light his way.

The funeral procession walked down the estate's private lane, which led to the public road, and then turned right. The nearest crossroads lay a half-mile away where the road branched into two, one road leading to the village of Abingdon and the other to the neighboring Briggs estate.

Their small entourage had just reached this traditional burial site for suicides when the unmistakable sound of galloping horses drew their attention. Everyone whirled toward the village road to see four men on horseback advancing on them. The riders reined their mounts to an abrupt halt when they reached the funeral party.

"Who are you?" Edgar Briggs demanded. "State your business."

"We are friends of the late Earl of Abingdon," one of the strangers answered as he dismounted.

Sabrina stared at the tall, dark-haired man who appeared to be in his mid-twenties. She'd never seen him before, but men she and her sister hadn't traveled to London since they were children. She hoped these men were the illustrious peers of the realm who would champion her father's cause.

Much to everyone's surprise, an older gentleman stepped forward. First he lifted her aunt's hand to his lips, and men he placed a comforting arm around her shoulder. Turning to the others, he introduced himself, saying, "I am Charles St. Aubyn, the Duke of Kingston. This is my nephew, Adam St. Aubyn, the Marquess of Stonehurst, and the others are my nephew's retainers."

Sabrina looked at each of the newcomers in turn. The Duke of Kingston seemed a kindly gentleman, but his nephew appeared darkly dangerous. The marquess's retainers were two of the biggest men she'd ever seen.

"Though the circumstances are sad," Sabrina said, stepping forward to greet the duke, "I am pleased to make your acquaintance, Your Grace. How did you learn of my father's death?"

"Several days ago I received a message from your father, asking me to come to Abingdon," the duke told her. "Then, last night, Tess's message that your father had died arrived. We left London this morning and rode as fast as we could. You are which daughter?"

"I am Sabrina, the elder," she said with a wan smile. "This is my sister, Courtney."

"May we complete the burial?" Vicar Dingle asked in an irritated voice. "The law requires we bury suicides between nine and midnight. At this rateâ"

"My father did
not
commit suicide," Sabrina interrupted, rounding on the vicar.

"No one hangs himself by accident," one of the pallbearers muttered.

Sabrina gave the man a murderous glare but refrained from speaking. Nobody would ever convince her that her wonderful father had taken his own life, and she intended to prove he hadn't. She'd make the lot of them eat their words, especially the vicar.

"What about the prayers?" Sabrina cried.

"Praying for suicides is forbidden," the vicar told her.

"A plague take you," Sabrina said, cursing him for the second time that night.

Everyone stared at her in shock. She heard her aunt gasp, and one of the newcomers chuckled.

"Sabrina, how dare you speak disrespectfully to the vicar," Edgar exclaimed, placing his hand on her shoulder. "Apologize at once."

Ignoring him, Sabrina shrugged his hand off and asked the vicar, "Where is the death knell I purchased?"

"Tolling a death knell for suicides is forbidden," Vicar Dingle told her.

"My father will have a death knell even if I must ring it myself," Sabrina insisted. She turned away abruptly and bumped into the marquess, who grabbed her upper arms to keep her from falling. Looking up at him in surprise, she had the sudden wish that she could see his eyes in the darkness.

"Mistress Savage, I will escort you into the village lest someone try to stop you," the marquess said.

Sabrina nodded and gave him a grateful smile.

"Stop them," she heard the vicar order the pallbearers.

With a flick of his hand, the marquess gestured to his gigantic retainers, who blocked the path. The vicar and his pallbearers remained rooted where they stood while the marquess lifted her onto one of the horses.

The Marquess of Stonehurst scooped up one of the lanterns and then mounted his own horse. "Uncle, escort the other ladies to Abingdon Manor," he said. "Mistress Savage and I will meet you there later."

"Sabrina, think of what you are doing," the baron called after her.

"Edgar, think of what you are
not
doing," she replied.

Sabrina turned her horse and started down the village road. Beside her galloped the marquess's horse. They rode in silence into Abingdon and halted their horses in front of the church.

Still holding the lantern in one hand, the marquess opened the church's door. Sabrina stepped inside and the door clicked shut behind them.

The Marquess of Stonehurst touched her arm and asked, "How old was the earl?"

"Take this," he said, passing her the lantern.

Sabrina knew what he was offering to do. "Thank you, my lord," she said, lifting the lantern out of his hand.

With both hands, the Marquess of Stonehurst rang the death knell forty-one times, once for each year of her father's life as was the custom. Sabrina closed her eyes and prayed for her father's departed soul.

Finished with his task, the marquess took the lantern from her and led the way down the narrow staircase again. Outside, he set the lantern down and helped Sabrina onto her horse.