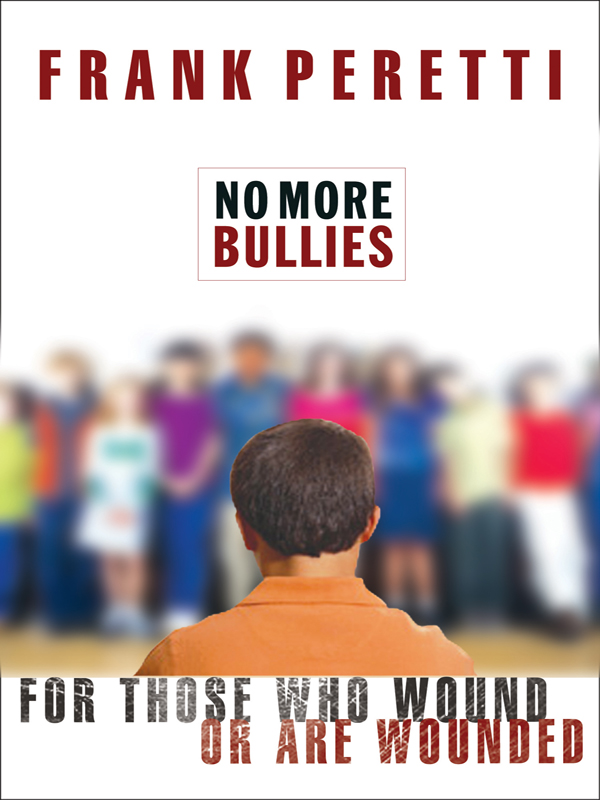 OTHER BOOKS BY FRANK PERETTI

Thomas Nelson, Inc. titles may be purchased in bulk for educational, business, fund-raising, or sales promotional use. For information, please e-mail [email protected]

The names of some individuals have been changed to protect their privacy. Some stories represent composites.

Unless otherwise noted, Scripture quotations used in this book are from the New King James Version,Â© 1979, 1980, 1982, Thomas Nelson, Inc., Publishers.

Scriptures marked NASB are from the New American Standard Bible, Â© 1960, 1977 by the Lockman Foundation.

To Mom and Dad, whose love and
encouragement never wavered, and to John,
who stood on the wall.

4. Monsters on the Loose

7. Help for the Wounded

8. For Those Who Wound

9. Things Could Be Different

A
separate room had been prepared for the boys. It was cold and impersonal, like a prison; the echoing, concrete walls had been painted dirty beige, then marred and chipped over the years, then painted again. The walls were bare except for posted rules, warnings, and advisories, and the only windows were high against the ceiling, caged behind iron grillwork thickly wrapped in paint, rust, and more paint. The air was dank, tainted with the odors of steam, sweat, and skin. Years of rust and sediment from the dripping showerheads and armies of bare, wet feet had marbled the floor with streaks and patches of reddish brown.

The authorities, clad in uniforms and carrying clipboards and whistles, marched the boys in, at least forty of them, all roughly the same age but many different sizes, strengths, and physical maturities. The dates of their births, the locations of their homes, and the simple luck of the draw had brought them here, and much like cattle earmarked for shipment, they had no voice in the matter. The paperwork was in. This room would be a part of their lives for the next four years.

He had never been in this place, or anywhere like this place, before. He had never imagined such a place could even exist. In here, kindness meant weakness, human warmth was a complication, and encouragement was unmanly. In here, harshness was the guiding virtueâ harshness, cruelty, and the blunt, relentless confirmation of every doubt he'd ever carried about himself.

Mr. M, a fearsome authority figure with a permanent scowl and a voice that yelledâonly yelledâordered them to strip down. His assistants, clones of his cruelty, repeated the order, striding up and down the narrow aisles between the lockers.

The boy hesitated, looking furtively about. He'd never been naked in front of strangers before, but even worse, he'd never been naked in front of enemies. It took only one class hour for the others to select him, to label him, and to put him in his place. He was now officially the smallest one, the scared one, the weakling, the one without friends. That made him fair game.

And now he would be naked in front of them. Naked. His stomach wrung; his hands trembled.
Dear God, please
get me out of here. Please don't let them do this to me.

But every authority figure in his life said he had to be here. He had to go to school, do his chores, finish his homework, keep his shoes tied, go to bed and get up at certain hours, eat his vegetables, and be here. End of discussion.

He removed his clothes.

The herdâpink, black, brown, and bronzeâmoved one direction, and all he could do was move with it, a frail, naked body among the forty, longing for a towel, anything to cover himself. Instinctively, he placed his hand over his private parts. Every other body was bigger and much stronger, and every other body had hair where the boy had none. He knew they would notice.

The showers were a long, high-ceilinged echo chamber, murky with steam, rattling with lewd, raucous joking and laughter. He didn't want to hear it.

After a big Hispanic kid finished his shower, the boy carefully took his place under the showerhead, afraid of slipping and even more afraid of grazing against anyone. Touching was dangerous; it could easily become a prelude to being hurt.

He let the water spray over him. He hurriedly lathered his body with some soap.

To his left, the talk startedâabout him. Then some laughing. The talk spread, the call went outâ“Hey, get a load of this!”âand an audience gathered, a semicircle of naked, dripping bodies. The talk
about
him shifted to jeering
at
him. He tried to act as if he didn't hear them, but he could feel his face flushing.
Get through, get through, get out of here!

He rinsed as well as he could, never turning away from the wall, then headed for the towel-off area, not meeting their eyes, trying to ignore their comments about his face, his body, his groin. But the arrows were landing with painful accuracy:
Ugly. Wimp. Gross. Little girl.

He grabbed a towel off the cart and draped it around himself before he even started drying with it. Even that action brought lewd comments and another lesson: Once it begins, no action, no words, no change in behavior will turn it back. Once you're the target,
anything
you do will bring another arrow.

And so the arrows flew: two, then three, then more. Obscenities, insults, put-downs.

Along with his hurt, he felt a pitiful, helpless anger. He wanted to lash out, to tell them to stop, to defend himself, but he was all too aware of his body, just as they were. He could never match the strength of any one of them, much less the whole gang, and they were waiting, even wanting him to try.

Snap!
Stinging, searing pain shot up from his groin like a jolt from an electric cattle prod.

Snap!
He heard the sound again as a towel whipped past his backside, missing by a millimeter. A big lug with a hideous grin pulled his towel back for another try, then he jerked it toward the boy's body again, snapping it back hard, turning the moist end of the towel into a virtual whip. The edge of the towel struck between the boy's legs, stinging like a cat-o'-nine-tails.

He cried out in pain while they laughed. He raised a knee to protect his groin but lost his footing on the wet tile and tumbled to the floor, his hands skidding on the slimy, soapy residue. He struggled to his feet. A wet foot thumped into his back, and he careened toward a locker-room bench loaded with laughing naked bodies.

“Hey, squirt, you lookin' for trouble?”

“I think this kid wants a fight!”

He fled to the only square foot of floor that might be his own, the space in front of his locker. His body was throbbing, his bruises a combined chorus of pain.

And his soul . . . oh, his soul. He was choking back his tears, hurrying, fumbling to get his clothes from his locker, resolving to remain silent, desperately hoping no one would see him cryingâbut deep inside, his soul wailed in anguish, and there were no words or thoughts to heal it. Parental advice came to his mind, but it carried as much weight as a cookie fortune: “Just ignore them.” Ignoring was only acting. It didn't stop the arrows from cutting through his heart. He even believed the taunts and stinging words.
Dear God, am I that ugly? Am I that weak and worthless?

“Hey, nude boy! Hey, nature boy!” Now the teacher's assistant, just a few grades ahead of him, was getting in a few jabs. “Get the lead out. The bell's gonna ring in five minutes.”

He got the lead out. Still wet, he threw on his clothes, missing one buttonhole in his shirt so that the shirt hung cockeyed on his back, but he didn't care. He grabbed his books out of the lockerâ

A hand slammed him against the locker, and his head bounced off the steel door. His books fell to the floor, the pages crinkling, his assignments spilling everywhere. He'd only begun the thought of picking them up when one of the jocks grabbed him around the neck, lifted him off the floor so his feet dangled, then dropped him on his books. He crumpled to the floor, gasping.

A whistle shrieked. It was Mr. M, angry as always. “Line up, line up!”

He gathered up his books, some of the pages wet, wrinkled, and grimy, and plugged an empty spot in the line.

One minute to go. He'd never felt such longing to be somewhere else. Somewhere in his memoryâright now, a
dim
memoryâwas a kinder world than this, a place where he could find some measure of his lost dignity, the last broken tatters of his self-respect.

The bell rang. Could it be over? Could it finally be over?

Mr. M swung the door open. The lines started moving, a few boys at the front of the line darting off as though they were in a race for their lives.

The stream of bodies poured into the narrow hall, and in a moment he was hurrying away from that place, taking several last looks over his shoulder, checking for danger, thankful he could still turn his neck.

In the main hall, he passed the trophy case, where the glories of his high school were on display. Here were the school colors, pictures of the school mascot, the trophies, the ribbons, the news clippings, the victoriesâeverything a kid should be proud of. His eyes flooded with tears. When he first came to this school, he looked in that trophy case, and, yes, he was proud. He was filled with an exhilarating joy and a sense of belonging. School spirit, that's what it was. He couldn't wait to buy a pennant to hang on the wall of his room.

But now, all he could do was shed tears and wonder,
How could a school like this,
my
school, have a place like
that?
Does anyone care? Does anyone even know?

In his next class, he sat at his desk, his clothes still damp, his body still aching, unable to keep his mind on the teacher's lecture or his eyes on the text. The mocking faces and the derisive, searing comments kept playing and replaying in his mind, overpowering anything and everything else.