Read No One Left to Tell Online

No One Left to Tell 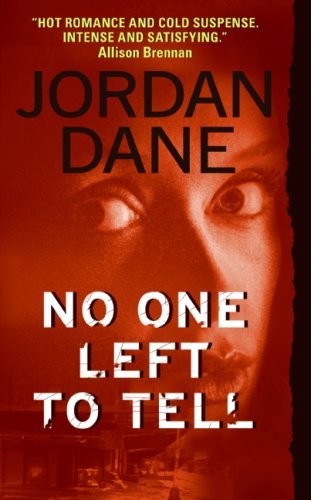 No One Left To Tell
By
Jordan Dane
Contents

In any language, these phrases

translate to love in my family.

On the trail of money, Mickey Blair sniffed out opportunity like most men chased skirts—one led to the other, but cash never got a headache. The piece of paper fluttered in his hand as a brisk wind caught its frayed edge. He scrolled it with spread fingers to read his own scribbling and looked up, squinting against the cold to verify the warehouse number. The place was a pit. He stuffed the crumpled paper into his overcoat. He'd hoped for better arrangements from his potential new client. The e-mail he'd received late yesterday had been cryptic, but he was confident the job would be simple and the money irresistible. The best kind of incentive. A glance at his Rolex assured him he wasn't late.

With the sun fading into the layers of dark clouds along the horizon, the bite in the air stung his cheeks. Large, wet flakes accumulated on the ground, defying the swirling gusts. With a sideways glance, he caught sight of his black Mercedes parked to the left. His latest toy. He'd soon have it stored for winter. Time to break out his SUV. His work provided a nice little nest egg. Images of white sand beaches filtered through the cold. The imagined scent of coconut teased his senses. He pictured grains of sand clinging to his dark skin slick from tropical oils. Before long, he'd be set for life.

Killing was a lucrative business.

Safely locked away until he needed it for a job, his custom-made Heckler
&
Koch sniper rifle had been a good investment. At his age, he had cultivated a dependable, discreet reputation over the years. Mickey enjoyed the best of both worlds—flying below the radar of law enforcement while reaping all the benefits of his deserved notoriety. The art of assassination provided him a life worth living. He loved irony, when it suited him. A smile influenced his swagger as he approached the side entrance to the building. His unfastened overcoat buffeted in the breeze. Instinctively, he felt for his gun, a SIG Sauer secured in its leather holster under his suit jacket.

After a tug at the metal door, he rubbed his palms together to wipe away the rust and dirt, careful not to soil his coat or Armani suit. Once inside, he shortened his breaths to lessen the intake of stale air and surveyed the carcass of the old deserted warehouse. But his next breath morphed into an instinctive gasp when the door slammed shut behind him. He turned and heard a key slip into the lock. The dead bolt slid into place. And he caught the distinct sound of someone running away. He yanked at the door, the filth of the cement floor crunching underfoot. Locked.

"What the hell?" he muttered under his breath, then called out, "This isn't funny, you sick bastard."

Slowly, he gaped over his shoulder into the cavernous space. In the split second his eyes oriented to the murky and cluttered interior, the lights went out. Complete darkness. His equilibrium distorted, he couldn't see his damned hand in front of his face. He raised his weapon, fingers tensed against the grip.

"If this is some kind of joke, someone's gonna get shot!" He raised his voice, covering his tension with attitude. "I don't have time for this."

"Make time." A low voice assumed familiarity. An echo disguised its origin. "I made time for you."

The sound mutated to a whisper, prickling his skin.

"Do I know you?" Mickey swallowed hard. His eyes searched the dark for anything at all. No answer. The man wasn't giving him a chance to locate his hiding spot, offering a target for his SIG Sauer.

A glimmer drew his attention. Heading toward the flicker of light, he felt his way along a barrier of varying height, stubbing the tips of his shoes. In no time, he lost his way. He couldn't tell where he had entered the old building.

Thud! Thwack!
Two rounds hit his chest. A burst of liquid burned his nostrils. Vapor stung his eyes. Silenced gunfire? His hands reached for the sore spots under his suit, rubbing the welts. Anger got the better of him. He returned fire. Pointing his gun into the dark, he shot twice before thinking. Muzzle flash blinded him. Fingers pressed against his eyelids, he squeezed his eyes shut and listened to the ricochet.

"Who are you?" he shrieked. Spittle ran down his chin. Feeling like a cat with nine lives, he bristled with hostility. If the pellets had been real bullets, he would've been dead. "What kind of game are you playing here?"

The air was stagnating and thick. Sweat trickled from his brow, nearly blinding him with its sting. He leaned against something firm. All he needed was time to think.
God, think!

"Who the hell are you people?" he shouted. More than one person hid in the dark. Strange animal noises erupted overhead. The muffled sound of laughter mocked his torment, his only reply.

Although he couldn't be certain, it appeared they were herding him through a maze of obstacles. They pounded him with pellets of some kind. The animal calls only got worse—clamoring all around him. Primal instinct kicked in and panic gripped him hard, squeezing his chest. Remembering to close his eyes, Mickey fired two shots, reminding them he would be dangerous up close.

"There's been a mistake. I was asked to come here. Some guy had a job for me," he cried, trying to reason with his faceless attackers.

What the hell had he done? The irony wasn't missed on him. Now the tables were turned. Normally the predator, this time he would be the hunted.

Blood boiled under the surface of his skin. He shrugged out of his overcoat and kicked it aside. Tugging at his tie, he pulled it over his head and hurled it into the dark, not caring where it landed. Only a week ago, he'd bought the designer tie, more impressed by its price tag. Now, he didn't give a rat's ass about any of it. His fingers slick with sweat, he yanked at the collar of his shirt. Buttons popped off onto the warehouse floor.

He squinted in every direction. Nothing but blackness. Emptiness magnified the sound of his heart. Another blast from above. Something slapped him hard. It burned the skin of his neck. He winced and shrugged a shoulder. An object stuck to his body, then slid under his collar and down the inside of his shirt. His fingers followed the path, but he gave up trying to find it.

"What the hell—? Jesus. What's
wrong
with you people?"

With these bastards tracking him in the dark, it meant only one thing. He had to find a hole to hide, unsure where that might be. Feeling his way on all fours, Mickey crawled to change positions. His fingers felt along a wall. But he didn't know if he'd be heading for the door or deeper into the maze. One way might be his salvation. The other would be certain death.

Thwack!
A round hit above him. On instinct, he covered his head with an arm.
A damned sitting duck!

No time for doubt. He had to move. Slowly, he stood and picked a direction to run, a hand out in front. He had trusted his luck for a lifetime. Surely, it wouldn't fail him now.

Thud!
An explosion against the side of his temple sent swirls of blinding light through his head. His eyes on fire, they burned like acid. Chills of shock ran through him. When he slumped to the floor, his gun skittered across the cement, lost in the darkness.

Stunned, he needed only a moment to catch his breath. Only a moment. He pushed against the wall behind him, struggling clumsily to his feet. But a deathlike stillness seized him. A presence eased closer. Slowly, he turned his head, tears rolling down his cheeks. Someone was . . .

An arm gripped his chest, cradling him in the grasp of someone standing behind him. He smelled alcohol on the man's breath.

"You're mine now." The intimate whisper brushed by his ear. It shocked him. The familiarity sounded like it came from the lips of a lover. "Don't fight me."

For an instant, Mickey relaxed long enough to hope—maybe all this had been a mistake. Then he felt a sudden jerk.

Icy steel plunged into his throat, severing cartilage in its wake. A metallic taste filled his mouth. Its warmth sucked into his lungs, drowning him. Powerless to free himself, Mickey resisted the blackness with the only redemption possible. He imagined high tide with him adrift. He struggled for air, bobbing just beneath the ocean surface. The sun and blue sky warped with a swirling eddy. Mercifully, sounds of surf rolling to shore clouded the fear when his body began to convulse. Dizziness and a numbing chill finally seized him. And the pounding of his heart drained his ability to move at all.