Read No Rest for the Wicked Online

No Rest for the Wicked 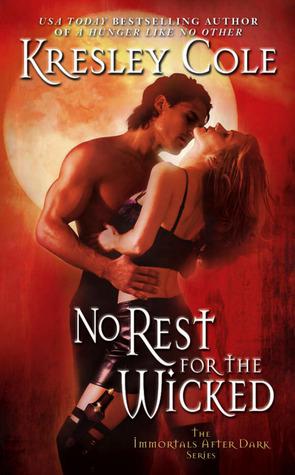 Create PDF
files without this message by purchasing novaPDF printer (
http://www.novapdf.com
)
No Rest for the Wicked

I could touch her...

She would accept my touch...

Sebastian had suffered centuries without contact with others, much less touch, yet now a

He raised his shaking hands to her waist, dragging her to him. He barely stifled a shudder

when her lush breasts pressed against him. “Tell me your name.”

“My name... ?” she murmured absently. “My name is Kaderin.” Her voice was sensual, a

voice from dreams. It seemed to rub him from the inside.

“Kaderin,” he repeated, but it didn’t fit her. As he stared down into her dark eyes, he

realized the name was too cold, too formal, for the creature in his arms. “Katja,” he

rasped, surprised to find that his thumb was brushing slowly over her bottom lip. The urge

to kiss her was overwhelming. “Katja, I... ”—he began in a rough, breaking voice—

At his words, the dark hazel of her eyes turned completely silver. “I used to love being

kissed,” she whispered in a dazed tone. Her delicate arms laced up his chest, and she

clutched his shoulders desperately. “Vampire, please”—she stared up at his lips and licked

Don’t know what I’d do without my Bebs.

My deepest thanks go out to three amazing ladies and very talented authors: Gena

Showalter for all her incredible support, Caro Carson for always being there for me in a

pinch, and Barbara Ankrum for her eagle-eyed critiques and encouragement. And thank

you to Richard, my wonderful husband, for confirming the times of sunrises and sunsets all

over the globe and for verifying the travel and transportation logistics in this book.

T
wo of my brothers are dead, Sebastian Wroth thought, staring up from the floor as he

fought to keep from writhing in pain. Or half-dead.

All he knew was that they’d returned from the battlefront... wrong.

Nikolai, the eldest, and Murdoch, the next eldest, had finally returned home from the

Estonian-Russian border. Though Sebastian could hardly believe it, they must have left

behind the war that still raged between the two countries.

An angry storm boiled, lashed inland from the nearby Baltic Sea , and out from the

torrents of rain, the two strode into Blachmount Manor. Their soaked hats and coats

stayed on. The door remained open behind them.

Before them, spread throughout the main hall, was the carnage that used to be their

family. Four sisters and their father were dying of plague. Sebastian and their youngest

brother Conrad lay battered and stabbed among them. Sebastian was still conscious.

Mercifully, the rest weren’t, not even Conrad, though he still hissed with pain.

Nikolai had dispatched Sebastian and Conrad home to protect them mere weeks ago. Now

bands of Russian soldiers. Last night, the soldiers had attacked, seeking the rumored

riches here as well as the food stores. While defending Blachmount against dozens of

them, Sebastian and Conrad had been beaten and then stabbed through the gut—but not

killed. Nor had the rest of the family been injured by them. Sebastian and Conrad had held

the soldiers off just long enough for them to realize the home was plague-stricken.

The invaders had run, leaving their swords where they’d plunged them...

As Nikolai stood over Sebastian, water dripped from his long coat and mingled with

Sebastian’s congealing blood on the floor. He cast Sebastian a look so raw that for a

disgusted as Sebastian himself was.

And Nikolai didn’t understand the half of it.

Sebastian knew better, though, knew Nikolai would shoulder this burden as he had all

others. Sebastian had always been closest to his oldest brother, and he could almost hear

Nikolai’s thoughts as though they were his own: How could I expect to defend a country,

when I could not protect my own flesh and blood?

Sadly, their country of Estonia had fared no better than this family. Russian soldiers had

stolen harvests in the spring, then salted and scorched the earth. No grain could be coaxed

Create PDF
files without this message by purchasing novaPDF printer (
http://www.novapdf.com
) from the soil, and the countryside starved. Weak and gaunt, the people had easily

succumbed when plague broke out.

After recovering from their shock, Nikolai and Murdoch drew away and conferred in

harsh whispers, pointing at their sisters and father as they debated something.

They did not seem to be discussing Conrad, unconscious on the floor, or Sebastian

himself. Had the younger brothers’ fates already been decided?

Even in his delirium, Sebastian understood that somehow the two had been changed—

changed into something his fevered mind could scarcely comprehend. Their teeth were

different—their canines were longer, and the brothers seemed to bare them in fury and

dread. Their eyes were fully black, yet they glowed in the shadowy hall.

As a boy, Sebastian had listened to his grandfather’s tales of fanged devils that lived in the

They could disappear into thin air and reappear at will, traveling easily that way, and now,

through the still-open doorway, Sebastian spied no sweat-slicked horses outside, tethered

They were baby snatchers and blood drinkers who fed on humans as if they were cattle.

Or, worse, they turned humans into their kind.

sought to damn their entire family as well.

“Do not do this thing,” Sebastian whispered.

Nikolai heard him from too far across the room and strode to him. Kneeling beside him, he

asked, “You know what we are now?”

Sebastian nodded weakly, staring up in disbelief at Nikolai’s black irises. Between gasping

breaths, he said, “And I suspect that... I know what you contemplate.”

“We will turn you and the family as we were turned.”

“You must, brother,” Nikolai murmured. Were his eerie eyes glinting? “Otherwise you die

“Good,” Sebastian rasped. “Life has long been wearying. And now with the girls dying—”

“We will try to turn them as well.”

“You will not dare!” Sebastian roared.

Murdoch cast a look askance at Nikolai, but Nikolai shook his head. “Lift him up.” He

made his voice like steel, the same tone he had used as a general in the army. “He will

Though Sebastian struggled, spitting curses, Murdoch raised him to a sitting position. A

sudden rush of blood pooled from Sebastian’s stomach wound. Nikolai flinched at the

sight but bit his wrist open.

“Respect my will in this, Nikolai,” Sebastian grated, his words desperate. He used his last

reserves of strength to clench Nikolai’s arm and hold his wrist away. “Do not force this on

us. Living isn’t everything.” They’d often argued this point. Nikolai had always held

survival sacred; Sebastian believed that death was better than living in dishonor.

Nikolai was silent, his jet eyes flicking over Sebastian’s face as he considered. Then he

finally answered, “I can’t... I won’t watch you die.” His tone was low and harsh, and he

seemed barely able to maintain control of his emotions.

“You do this for yourself,” Sebastian said, his voice losing power. “Not for us. You curse

us to salve your conscience.”

He could not let Nikolai’s blood reach his lips. “No... damn you, no!”

But they pried his mouth open, dripped the hot blood inside, and forced his jaw shut until

They were still holding him down when he took his last breath and his sight went dark.

And none will hear the postman’s knock

Without a quickening of the heart.

For who can bear to feel himself forgotten?

F or the second time in her life, Kaderin the Coldhearted hesitated to kill a vampire.

In the last instant of a silent, lethal swing, she stayed her sword an inch above the neck of

her prey—because she’d found him holding his head in his hands.

She saw his big body tense. As a vampire, he could easily trace away, disappearing.

Instead, he raised his face to gaze at her with dark gray eyes, the color of a storm about to

be unleashed. Surprisingly, they were clear of the red that marked a vampire’s bloodlust,

which meant he had never drunk a being to death. Yet.

He beseeched with those eyes, and she realized he hungered for an end. He wanted the

death blow she’d come to his decrepit castle to deliver.

She’d stalked him soundlessly, primed for battle with a vicious predator. Kaderin had been

castle and terrorizing a village in Russia .” She had gladly volunteered to destroy the

leech. She was her Valkyrie coven’s most prolific killer, her life given over to ridding the

In Scotland , before this call to Russia , she’d killed three.

So why was she hesitating now? Why was she easing her sword back? He would be

merely one among thousands of her kills, his fangs collected and strung together with the

broken forever by it.

In a deep, gravelly voice, the vampire asked, “Why do you wait?” He seemed startled by

the sound of his own words.

I don’t know why. Unfamiliar physical sensations wracked her. Her stomach knotted. As

though a band had tightened around her chest, her lungs were desperate for breath. I can’t

The wind blew outside, sliding over the mountain, making this high room in the vampire’s

darkened lair groan. Unseen gaps in the walls allowed in the chill morning breeze. As he

stood, rising to his full, towering height, her blade caught the wavering light from a cluster

Create PDF
files without this message by purchasing novaPDF printer (
http://www.novapdf.com
) of candles and reflected it on him.

His grave face was lean with harsh planes, and other females would consider it handsome.

His black shirt was threadbare and unbuttoned, displaying much of his chest and sculpted

torso, and his worn jeans were slung low at his narrow waist. The wind tugged at the tail

of his shirt and stirred his thick black hair. Very handsome. But then, the vampires I kill

His gaze focused on the tip of her sword. Then, as if the threat of her weapon were

forgotten, he studied her face, his eyes lingering on each of her features. His blatant

appreciation unsettled her, and she clutched the hilt tightly, something she never did.

Honed to masterly sharpness with her diamond file, her sword cut through bone and

muscle with little effort. It swung perfectly from her loose wrist as though it were an

extension of her arm. She’d never needed to hold it tightly.

Take his head. One less vampire. The species checked in the tiniest way.

“What is your name?” His speech was clipped like an aristocrat’s, but held a familiar

accent. Estonian. Though Estonia bordered Russia to the west and its inhabitants were

considered a Nordic breed of Russian, she recognized the difference, and wondered what

he was doing away from his own country.