Read No Way to Die Online

No Way to Die 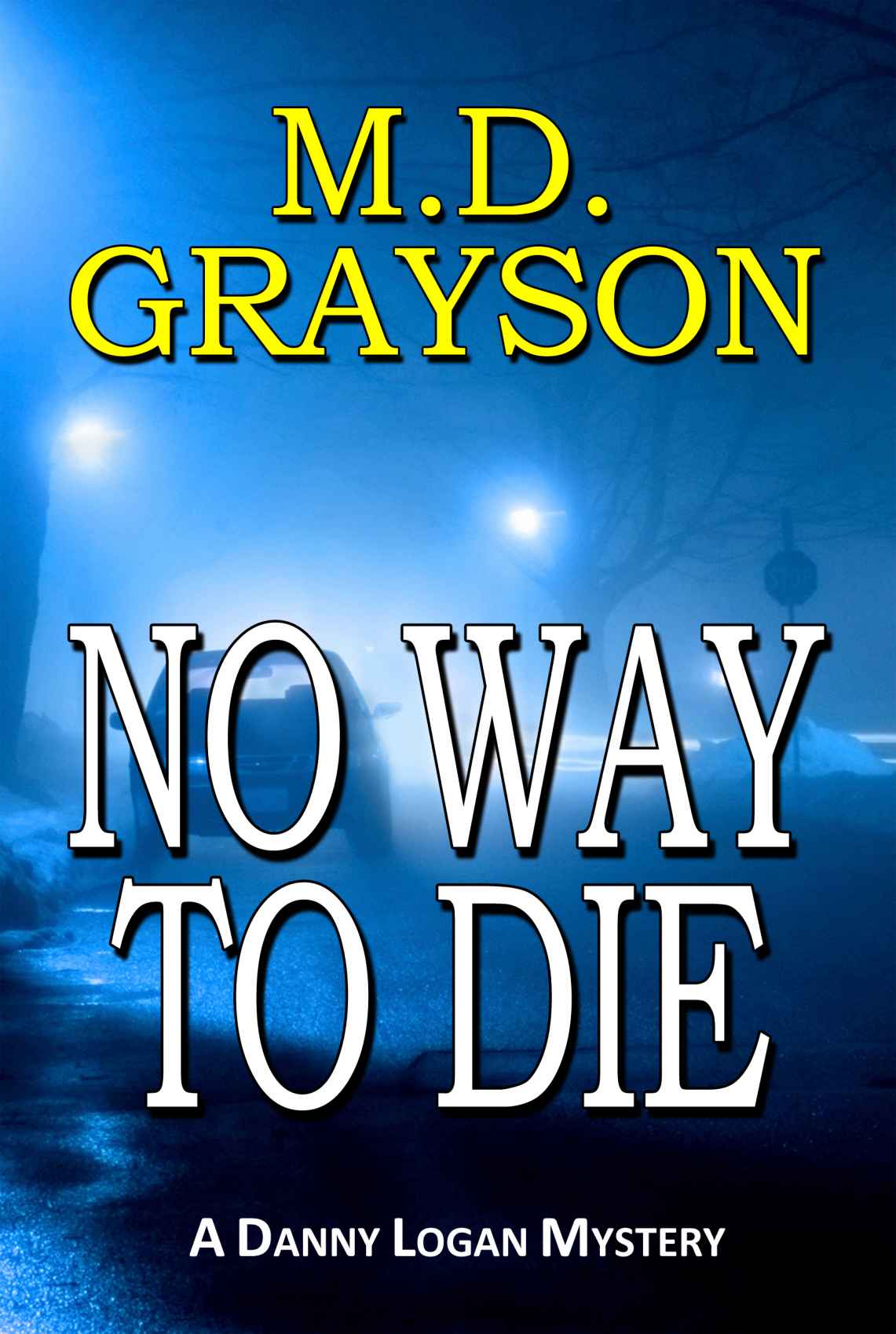 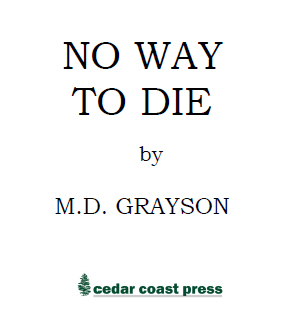 Other Books by M.D. Grayson

This novel is dedicated
to my parents—
thanks for always
being there.

SEATTLE’S DISCOVERY PARK is located on Magnolia Bluff, overlooking the Puget Sound. The park’s westernmost edge, unsurprisingly called West Point, juts into the Sound and divides Elliott Bay and downtown Seattle in the south from Shilshole Bay in the north. “DP,” as it’s affectionately known to Seattleites, is the largest park in the city and is a local favorite. The city maintains the park in a semi natural state, meaning the native grasses, ferns, and trees have been protected except where they intrude onto the paths and picnic grounds that have been carved out. Vistas from different points in DP feature spectacular panoramic views of the Sound, the Cascades to the east, and the majestic snowcapped Olympics to the west. On most days—the nice sunny ones, anyway—the miles of trails within the park are crowded with walkers, hikers, and runners, even at an early hour. This particular day, though, was not one of the nice ones, and the park was quiet and eerily muffled. The predawn sky was still dark, made even more so by a low-hanging mist. A cold Seattle drizzle fell from the clouds.

In the park’s east parking lot, Jerry Carlson finished his pre-run warm-up ritual near his car. Being a native Seattleite and an experienced runner, he adhered to the old Northwest adage that “the weather doesn’t dictate what you do—it only dictates what you wear while you do it.” With his tights, rain jacket, and hat, Jerry was well prepared. The rain and the darkness didn’t faze him. Jerry leaned against his car and did his stretches, taking care to warm up his leg muscles properly. He’d learned from hard experience that it was better to spend ten minutes stretching than ten weeks with a pulled hamstring. When he was satisfied that he was properly prepared, he checked to make sure he had his ID and his cell phone. He locked his car and began walking toward the trail entrance. Jerry liked to park in the east lot and join the Loop Trail there. His normal morning route allowed him to knock out an easy 3.7 miles before he headed to work. It usually took Jerry forty minutes or so, even if it was raining.

He started off at an easy pace on the Loop Trail as it wound its way westerly through the forest. After a half mile, he made a turn to the north on a narrow side path cut through the forest. One hundred yards later, he broke out of the trees and passed through the north parking lot. He noticed a dark SUV with two fellow early morning runners doing their warm-up stretches alongside. He didn’t recognize either man, so he didn’t stop to chat. Instead, he waved as he passed, and they waved back without saying anything. He re-entered the forest on the far side of the north lot and worked his way back up to a steady rhythm. After so many years on the trails, the correct running cadence was as natural to Jerry as walking.

Ten minutes later, he reached the Indian Cultural Center and turned south on an access road that was closed to private vehicles. Aside from the two guys in the parking lot, he still hadn’t seen another runner on the trails yet.
Not surprising
, he thought, wiping the rain from his face.
Only the diehards come out on a day like today
.

His mind wandered freely, lost in the steady rhythm of his footsteps on the pavement. He had a sudden moment of near panic when he realized that today was Valentine’s Day and he’d yet to order flowers for his wife.
Could be trouble getting them delivered now
, he worried. Fortunately, his assistant was very resourceful, and he knew he’d be able to rely on her to help bail him out.

Just as the access road Jerry was on reached an intersection with a main road, his thoughts were interrupted by a strange muffled sound that caused him to pull up and stop.
What was that?
he wondered.
Was it a yell?
He wasn’t sure what he’d heard. He strained to listen, trying to pull sounds from the mist. He wasn’t out of breath yet, so he was able to hear clearly. Seconds later, he heard a sharp
pop!
from his left—the direction of the north parking lot where he’d been ten minutes earlier. He turned in the direction of the sound and peered into the gray mist, but he was too far away—he couldn’t see the parking lot from his intersection.

As an accountant for the Seattle Police Department for the past twenty-three years, Jerry'd had plenty of opportunities to hear the sound of firearms at the department’s various ranges. He’d spent days in the range offices, auditing visitors, supplies—basically, whatever needed to be counted. He’d grown accustomed to the sound of guns being fired, and the noise he’d heard sounded just like a muffled gunshot to him. He felt his heartbeat increase as he reached for his cell phone and started to dial 9-1-1 when he suddenly caught himself.

Wait a second! Slow down! What if the noise was just a backfire? Given the direction, it was most likely that that SUV was trying to start up and leave. I’d look like the stupidest police department employee in the world if I called in a gunshot and it turned out to be a car needing a tune-up
. Jerry realized there’d be no end to his harassment. The guys would be popping off firecrackers near his car in the parking structure for the next year. Not wanting to be the butt of anyone’s joke, Jerry decided to investigate before making the call. He was less than a quarter mile from the north parking lot. He began jogging in that direction.

Two minutes later, he entered the lot from its west side. The SUV he’d seen earlier was gone. Instead, there was a car in the lot—a silver Lexus. Even through the dim mist, Jerry recognized the car as belonging to another frequent runner named Tom. Jerry had seen Tom on the trails many times. Although they weren’t technically friends, they were friendly enough, even to the extent that they’d run together from time to time when they bumped into each other on the trails. Jerry recalled Tom saying once that he worked in the tech industry.

Tom’s car lights were off, but with the help of the overhead parking lot light on the far side of the car, Jerry could see that Tom was still sitting inside, motionless. Jerry approached cautiously. He reached into his pocket and pulled out a small flashlight his daughter had given him for Christmas, but he didn’t turn it on yet. When he reached a point about ten feet from the passenger-side door, he called out, “Tom!”

The man in the car didn’t respond.

“Tom!” Jerry shouted, louder. “Are you all right?”

Still, Tom didn’t respond. Jerry took another couple of steps toward the car. He turned his light on and shined it inside the car.

“Oh my God!” he yelled. Inside the car, Tom leaned against the driver’s door, eyes fixed wide open. Jerry could see that he’d been shot. The driver’s window had been partially blown out. Where it was still in place, it was covered with blood and brain matter.

Jerry immediately broke into a cold sweat and felt both faint and sick to his stomach. He took a deep breath and tried to steady himself. When he was able, he grabbed his cell phone and punched in 9-1-1.

“A man’s been shot,” he gasped. “Discovery Park. North parking lot.” He took two steps backward, and then turned and threw his breakfast up onto the parking lot.

At 7:15 a.m., Seattle Police Department Homicide Detective Inez Johnson rolled into the SPD garage in a tired, unmarked white 2004 Ford Crown Victoria. Just as she’d arrived at her office in the Seattle Criminal Justice building downtown earlier that morning, she’d received a call on her cell phone directing her to investigate a shooting at Discovery Park. She’d put her briefcase with the case files she’d taken home on her desk, grabbed a camera, and turned right back around for the garage. She made it to Discovery Park in twenty minutes.

Johnson scanned the area as she rolled up. Two squad cars and a fire department paramedic unit were already on scene, parked behind and beside a silver Lexus. There were no other cars in the lot. Inside the Lexus, a man—apparently the shooting victim—was hunched against the driver’s side door. Three police officers and two paramedics stood in a group behind the Lexus, talking to each other. Since no one was working on trying to save the victim, Johnson interpreted this as confirmation that the man in the Lexus was already dead. She parked alongside the other vehicles and got out.

“Good morning, Detective,” one of the patrol officers said to her as she approached the group. “Ryan Matthews, West Precinct.”

Johnson looked at the Lexus. “Doesn’t look like much of a good morning for him, does it, Officer Matthews?” she said as she nodded toward the person in the Lexus. Her voice had a distinct Caribbean accent.

Matthews glanced at the Lexus. “True,” he said. “Not for him. He was DOA when I got here.”

She carefully scanned the area. “Were you first on scene, then?” she asked.

“Where’s he now?” she asked, looking around.

“We’ve got him in the back of my car.” Matthews nodded toward his patrol car. “Turns out, he’s a bean counter for SPD. Works downtown.”

Johnson stared at the man through the closed window of the patrol car. He looked shaken. “Is that right?” she asked.

“Yeah. Poor guy hurled all over the parking lot when he saw the dead guy in the car.”

She turned back and looked at the body in the Lexus. “Not hard to believe,” she said. “Don’t imagine an accountant sees dead bodies all that often.” She looked at the blown-out side window and the blood and gore that covered it. “Especially like this one. Pretty good mess.”

Matthews nodded. “You’re probably right. He’s shaken up, that’s for sure. He says he’s a runner. Says he runs here in the park almost every day and that he’s seen the vic running here on occasion; even ran with him from time to time. Says the vic’s name is Tom—doesn’t know the last name. This morning, the witness says he was running by himself north of here near the Indian Cultural Center when he heard a gunshot. He came back this way to check it out and discovered the scene.”

Johnson looked at the body and at the blood spattered all over the inside of the car. “Probably came as quite a shock, seein’ his friend this way. I can see why someone not familiar with this would have trouble stomaching it.”

“Geez, Detective, I see ’em all too often, and I
still
have trouble with it,” Matthews said. “Especially ones like this. It looks like a classic 380 to me.”

Iloria by Moira Rogers
Heart Duel by Robin D. Owens
Falling for Her Husband by Karen Erickson
In the Stillness by Andrea Randall
Shimmer by Noël, Alyson
Thought Manipulation: The Use and Abuse of Psychological Trickery by Sapir Handelman
The Surgeon's Convenient Fiancée (Medical Romance) by Rebecca Lang
Sins of a Duke by Stacy Reid
i 9fb2c9db4068b52a by Неизв.
The Amish Clockmaker by Mindy Starns Clark
Our partner