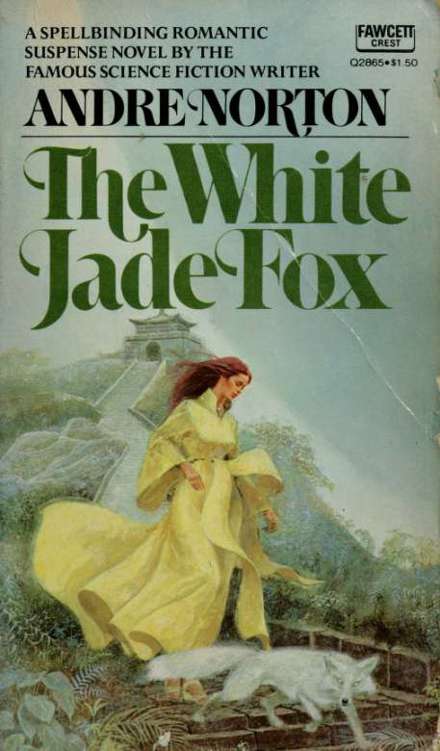 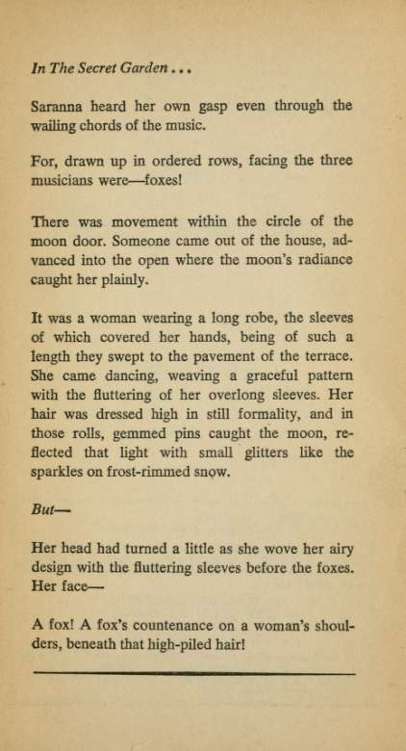 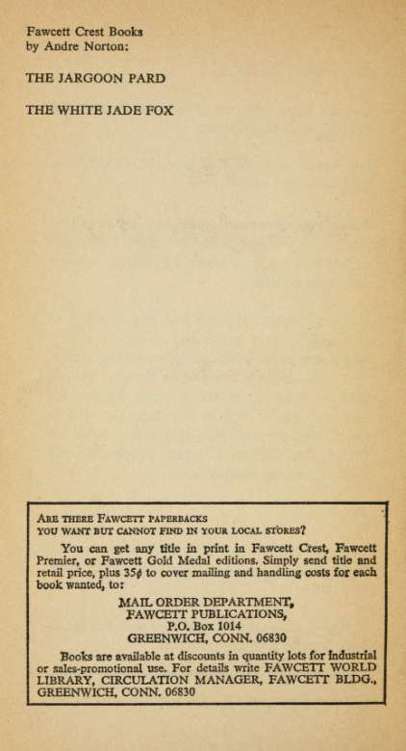 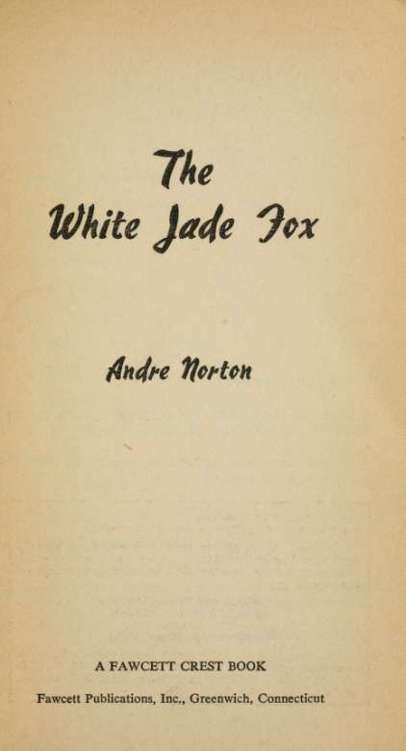 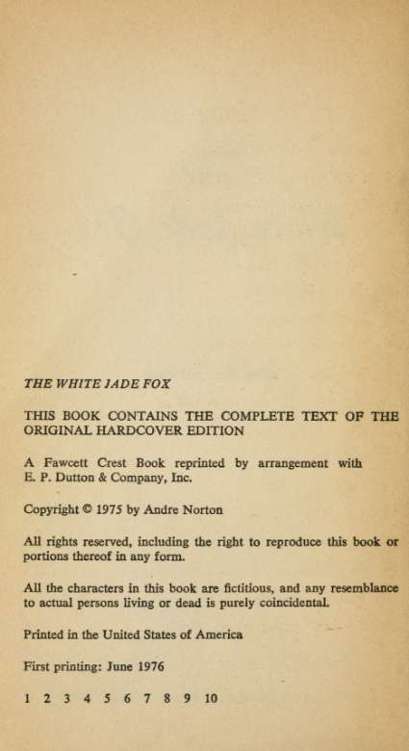 Saranna faced, not toward the
port
of
Baltimore
, as the bark drew in, but rather out to the
freedom of the sea. All during the voyage from
New York
she had hardly been able to stand
imprisonment in the fusty, cramped cabin. And now that she had good reason to
go on deck, she drew in deep breaths of the salt air, as refreshing to her now
as the lilac bush her mother had so treasured. She was a sea captain's
daughter, and yet she had never before been to sea.

She wondered, not for the first time, why
Mother had never sailed so. Many captains took their wives; children were even
born at sea, or in strange comers of the world where American clippers lay at
anchor.

Mother had had such a hunger for far places.
Most of the books she had squeezed out pennies to buy, after Father's whaler
had been lost, had been battered, second-hand copies of travelers' accounts.
Saranna could see her now, rubbing fingertips over the satin-smooth finish of a
lacquer box, telling Saranna of the distant and mysterious
China
from which it had come.
China
was a land of pure enchantment for Keturah
Stowell's small daughter. Of course, white women were forbidden to go there.
The Chinese forced captains' wives to disembark at
Macao
to wait out the ships' visits to
Canton
. But Mother's stories had been Saranna's
choice over any fairy tales.

Sararma was startled out of her memories,
memories that ended in sad times which made her both grieve and feel angry at
the fate Keturah Stowell had faced so bravely when the news of the loss of the
Spindrift had come, after many weary months of no news at all. She turned
reluctantly away from the rail and the freedom of the sea to face Mr. Sanders,
her present traveling guardian—a stiff lawyer with whom she had only an uneasy
surface acquaintance. (She sometimes wondered with a small touch of that
independent surface levity, unbecoming to a penniless orphan, whether, if Mr.
Sanders were ever to smile, his whole countenance might not break brittlely in
two.)

But he was not alone this time. The man with
him was one Saranna had seen twice at a distance when she had dared, during
their voyage, to climb to deck for a breath of air. He was much younger than
the lawyer, with harsher features, his skin weathered as dark as a seaman's,
though he wore the fine broadcloth of a gentleman.

"May I present Captain Gerrad
Fowke?" Mr. Sanders asked abruptly. He might be doing something of which
he personally disapproved, but for which he had no choice. "Captain Fowke
is a partner of your brother in the new Brazilian venture. He wishes to offer his
services in any way—*'

Saranna guessed that Mr. Sanders believed such
an offer entirely unnecessary. But she inclined her head and the lawyer
continued:

The Captain bowed with a careless grace more
in keeping with his clothing than the face above his smoothly tied stock. He
moved far more easily with the swing of the ship than did Mr. Sanders.

"I fear I must drop the 'Captain’
nowadays. Miss Stowell. Now I am a landsman. May I say that I am deeply sorry
your introduction to
Baltimore
must be for such a sad reason—
"

He spoke more awkwardly than he moved, as if
he found the conventional words of condolence hard to voice. Saranna
knew
sympathy with that, nor did she wish to be continually
reminded by well-meaning strangers of her own present troubles. She replied in
a voice she schooled to the proper decorous note:

"You are most kind.
Captain—Mr.
Fowke."

Captain suited him much better than the
"Mr.” he asked for, she thought. But there was something in the very
intent gaze with which he regarded her which made Saranna vaguely uneasy.

Back home she had had little contact with men
since her father's last sailing.
Her time had been much
occupied either with helping her mother in the work of a village seamstress, or
in those studies her mother had been determined she was not to drop at their
sudden change of fortune.

To her there seemed
a
boldness
in the way Mr. Fowke studied her, and she wondered if she
should resent that inspection. If so, what was the proper look or gesture for
her to make? Hastily she pulled her veil into place. And from the slight change
in Mr. Sanders' expression she gathered that she was doing the right thing. But
Saranna also regretted inwardly that it was so necessary to always do the right
thing.

Mr. Fowke was certainly not handsome, but
there was
a strength
in his features which she
recognized. Any man who had commanded a ship carried that air of authority and
decision, as much a part of him as his well-tanned skin and those fine lines at
the comers of his eyes which came from squinting into the wind.

She also decided, taking advantage of the
barrier of her veil to study him, that he might not be as old as she first had
reckoned. There had been, and were, many captains in their early twenties
walking their own quarterdecks. Boys of seafaring families went to sea as young
as ten and battled an early path to command.

Reluctantly, she looked now to the land where
she had no wish to set foot. Even to see the port loom out of the distance
stirred her resentment. Jethro—the half brother old enough to be her father,
the brother she had never set eyes upon in her whole life—what right had he to
arrange her future for her without so much as a "by-your-leave"?

She had never learned the reason for the
quarrel which had separated Captain Stowell and his only son. But Jethro had
broken from the family mold of ship's officer to enter first one of the
merchant companies in
Canton
, and then, eventually, settle in
Baltimore
, where he was now pioneering in the coffee
trade with
Brazil
. He was an important man in
Baltimore
,
Mr. Sanders had made that plain.

Too important to come all the way to
Sussex
to collect his orphaned half sister;
instead he had sent Mr. Sanders. She wondered now what they would have done if
she had not been so bemused with grief and had flatly refused Jethro's order to
come to him. Would they have extracted her from Pastor Willis' house bound and
gagged like the unlucky heroine of one of those wild romances Mother had always
laughed at? Saranna wished now she had spoken her own mind.

Who wanted to go to
Baltimore
? She had no training in the airs and graces
of society. In her secondhand black dress, cut down so hurriedly from her
mother's best one, she must make a queer figure. She had already learned that
from a careful, if surreptitious, inspection of what she had seen worn by the
ladies of fashion in
New York
.

And Jethro's home, Mr. Sanders had told her,
had a lady of that ilk for mistress—her brother's widowed daughter Honora,
returned after only two years of married life and the loss of her husband, to
again assume rulership in her father's establishment.

The closer the bark approached the wharf the
more uneasy Saranna was. And when they were tied up and the gangplank run out
that uneasiness increased. There was no one waiting to meet her. She knew Mr.
Sanders was eager to be released from his charge of her, to be about pressing
affairs of his own. Yet he could not leave her standing here, the shabby sea
chest which served as her trunk at her feet.

It was Mr. Fowke who came to their rescue.
Behind him drew up a closed carriage of equal elegance to anything Saranna had
glimpsed in
New York
.

"The Triton," he nodded to the bark,
"is ahead of time. But that is no reason to put a lady to any
inconvenience. Ma'am, if you and Mr. Sanders will allow—"

The lawyer welcomed this solution. At his nod
Mr. Fowke himself set hand in the rope shng about the sea chest and almost
tossed that, bulky as it was, to the coachman to be stowed aloft.

Feeling that she was putting everyone to a
great deal of trouble, Saranna perched tensely on the edge of the seat,
refusing to take any pleasure in the comfort of a vehicle whose like she had
never seen before as they drove through streets she hardly regarded, so eager
was she to reach her destination and release her companions from their unwanted
responsibility.

The noise and confusion of those streets
resembled the roar which had half-frightened her in
New York
. However, here she caught sight of black
faces, new to one from the

North.
Now they were
out of the dock area, coming into streets lined with trees, those trees already
well into spring leaf.

Their brougham pulled into a half-circle drive
before one of the larger houses and Mr. Sanders went to knock at the door.
Saranna, handed out by Mr. Fowke, managed a few words of thanks as he placed
the sea chest on the stoop.

When the door opened a black house servant
faced Mr. Sanders. Saranna clutched her shawl, lifted her chin a fraction. She
was, after all, at her brother's house. Shabby as she was, unwanted though she
might really be, no one must guess her inner shrinking from the ordeal awaiting
her in this imposing residence—she could not think of it as a "home."

The servant bowed them in. Saranna had only a
quick chance to say good-bye to Mr. Fowke, who did not seem disposed to
accompany them, to her relief. The fewer eyes she had to face now the better.
Reluctantly, she marched into the wide central hall.

This interior, in spite of all which she had
gleaned from Mr. Sanders concerning her brother's wealth and position, was so
superior in elegance to the cottage where she and her mother had lived in the
village
of
Sussex
, the neat house they had had in happier
days in
Boston
, that she was momentarily bewildered.

There was such a wide spread of polished wood
and burnished metal, rich color of rug and curtain, that she could not really
distinguish any one object clearly in her first survey. She was not allowed
time for a second.

A woman was descending the graceful curve of
the
staircase,
such a woman as instantly centered all
attention upon herself.

Portrait of a Love by Joan Wolf
The Weekend: A Novel by Peter Cameron
Take A Chance On Me by Jennifer Dawson
Elite Metal-ARE-epub by Jennifer Kacey
Working Murder by Eleanor Boylan
A Perfect Hero by Samantha James
The Mammoth Book of SF Wars by Ian Watson [Ed], Ian Whates [Ed]
Echoes of Earth by Sean Williams, Shane Dix
Trouble at the Zoo by Bindi Irwin
Extra Life by Derek Nikitas
Our partner