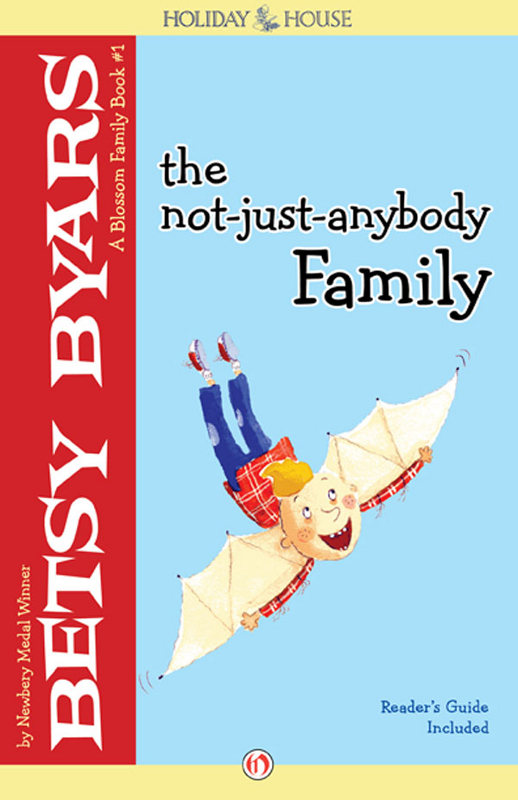 27. The Rest of the Blossoms

Chatting It Up: A Holiday House Reader’s Guide

A Biography of Betsy Byars

CHAPTER 1
On and Off the Barn

Junior stood on top of the barn, arms outstretched, legs apart. Strapped to his thin arms were wings made out of wire, old sheets, and staples—his own design. His mouth hung open. His eyes watched a spot over the cornfield where he hoped to land. He appeared to be praying.

“Go ahead and jump,” his brother, Vern, called.

“Give him time,” his sister, Maggie, said. She was sitting cross-legged on the ground, painting her fingernails with a green Magic Marker.

“Well, if he doesn’t jump before Pap gets home, he won’t get to jump. Junior, Pap won’t let you jump. If he catches you up there on the barn, he’ll whup you.”

Junior kept watching the small grassy clearing beyond the cornfield. He was trying to watch it long enough to make it his body’s destination. He felt his body had to know where it was supposed to go or it would end up twenty feet straight down in the hard dirt.

“Are you going to fly or not?” Vern asked.

Maggie held up one hand to admire her green fingernails and to blow on them, although they were dry. When she got the other hand done, she was going to make herself some rings out of clover. She loved to have beautiful hands because you could admire them so easily.

She showed her hand to Vern. “What do you think?”

“Are you going to fly or not?” Vern asked again.

Junior did not answer. His body was getting ready. He could actually feel strength seeping into his arms. The wings were actually becoming part of him, like a bird’s.

His tongue flicked over his dry lips.

“He’s not going,” Vern said. His voice was heavy with scorn. “He just wants us to stand out here and beg him.”

Maggie said, “Give him time.”

“That’s what we been doing. Every afternoon we been giving him … ”

He trailed off because he knew from past experience that it was impossible to predict what Junior would actually do. Junior was going to be a stuntman when he grew up, and sometimes he did things to prove he could, like go down Red Hill on a car made of an apple crate and two skates. “Good-bye, Red Hill,” Junior had called, letting go with one hand to wave. Other times, like the day he had pretended he was going over White Run Falls with an inflated garbage bag under each arm—that had come to nothing.

Since there was no way of being sure, Vern waited. In his boredom he tried to blow a bubble with his gum, but his gum was five days old. Vern was going to chew it for a solid week. Since the second day it had been like chewing a rubber band. The only way he could have any fun with it now was to pull it out and twist it around his tongue. He did this without taking his eyes off Junior.

“Junior, you going or not?” he called.

Junior kept watching the grassy patch between the cornfield and the road.

Maggie finished her other hand, but it wasn’t as nice as the first one. She had gone out of the nails in three places. “I couldn’t stand to be left-handed, could you?” she asked Vern.

Vern put his gum back into his mouth. He was standing on one leg now, like a flamingo, with the other foot braced on his knee.

Junior took a deep breath, filling his lungs with warm country air—it couldn’t hurt to have your lungs inflated with air when you jumped. The thought of his lungs as balloons was comforting to him. Maybe he wouldn’t even need the wings. Maybe he would just float. What a surprise that would be. Vern and Maggie—

Vern saw the expression on Junior’s face. “He’s going.” He spoke in the muted voice he used on the rare occasions when he got to the movies and didn’t want to disturb the people around him. He’d sit there, gripping the armrests, telling himself what was going to happen: “He’s going to crash. … He’s going to get his head blowed off,” until he did disturb somebody and they said, “Will you shut up!”

Maggie looked up from her nails. The top of the Magic Marker was in her mouth, so her mouth looked like a small green circle. She removed it. “Don’t hurt yourself, Junior,” she called.

Junior nodded without taking his eyes from the grassy clearing. He now thought of the clearing as his destination, the way a pilot thinks of an airport. He could see the very spot—that deep patch of clover—where he would touch down.

Vern knew that just before Junior flew, he would call “Good-bye, Barn.” Everyone in the family had tried to break Junior of the habit of saying good-bye to houses and trees and barns, but no one had succeeded.

“Maybe, maybe not,” Junior had answered, closing his eyes in an expression that made him look, he thought, wise.

Junior exhaled and took another of his deep, inflating breaths. Then he paused. Something beyond the clearing had caught his attention.

A small cloud of dust was moving on the road. Junior watched it first with irritation. Pap was coming home early.

Every Monday afternoon Pap went into town with a truckload of beer and pop cans, which they collected from Highway 123 and gas station trash cans and picnic areas. Today Pap must have sold them fast and was already coming home.

Junior knew he would have to fly right this minute or wait till tomorrow. And he didn’t want to do either. He felt he was almost ready—maybe another ten minutes and he would actually fly.

Frown lines came between his eyebrows as he squinted into the distance. He attempted to bring one hand up to shield his eyes so he could see better. He had forgotten this was not possible while you were wearing wings. It was also not possible to wipe the sweat off your chin or scratch where you itched.

Seeing the forward motion, mistaking it for a step off the roof, Vern cried, “He’s going!”

He took one step backward. His wings dragged on the worn roof. He could see what it was now. He gasped with fear. “It’s—it’s—”

“What’s wrong this time?” Vern said. “What’s your big excuse this time? Coward! Yellow-belly! Either you jump or I’m going in the house, and I’m not kidding. And I’m not coming back either. I knew you weren’t going to fly. You’re nothing but a lousy yellow-bellied coward!”

Junior raised one white wing to point to the dusty road. His eyes looked over their heads. He had stopped breathing. He was like a statue pointing.
The Winged Sentinel.

And then he said one of the most dreaded words in the family vocabulary:

She got to her feet like a startled deer. She heard in the distance the hum of an unfamiliar engine, an engine perfectly maintained, ready to give chase. “It i
s
the police.”

“Let’s get out of here,” Vern said. As he started to run he shouted, “Hide, Junior!”

Maggie flicked her braids over her shoulders and followed. She and Vern ran for their lives, around the barn, past the house, down the gully where Pap threw the household trash. Stumbling over rusty fenders, old bottles, rotten wood, papers, they headed for the woods.

They barely heard Junior’s desperate cry. They ducked through the trees. They knew these woods because they had been running through them all their lives, running from each other mostly, but now it was as if all that had been practice for this moment.

Without a word they dodged through the trees. At the creek they skidded down the bank and jumped together. They kept running.

Not until they were three miles into the woods, past the ravine, did they stop. Then, by mutual unspoken consent—they both knew they were too far into the woods for the police to follow—they flung themselves down on the soft green moss.

Vern had landed on his back and was lying with his eyes shut, mouth open, hands crossed over his chest. He was breathing so hard and fast, his throat stung.

Maggie was wincing, holding her side because everytime she ran fast, it hurt. Her green-tipped fingers pressed hard into the flesh beneath her jeans.

Maggie played different solitary games in different parts of the thick, untouched forest. Here, in this pine-ringed clearing, was where she usually played Hiawatha, but Indian games were not on her mind today.

She was the first one to get her breath. “What do you think?”

Vern couldn’t speak yet. He shook his head without opening his eyes.

“What do you think they wanted?” Maggie asked.

“Maybe it wasn’t the police,” Maggie said. “Did you ever think of that?”

“It was the police,” Vern managed to say.

“We didn’t see them. I didn’t. All I heard was Junior yelling ‘Police!’ Maybe he did that to keep from flying. Maybe it was just—oh, some person who’d turned into our road by mistake.”

High in a tree a woodpecker worked on an old limb.

Maggie kept thinking. She was trying to come up with some optimistic reason for the arrival of the police. She couldn’t. Finally she said, “Maybe Pap was in an accident.”

Again Vern shook his head, this time because he didn’t think that was what had happened.

“Then what?” she asked impatiently.

Vern lifted his shoulders and let them fall. Slowly, with great effort, he sat up.

Suddenly he was aware that his chewing gum—his constant companion for five days—was missing. He didn’t know if he had swallowed it or if it had popped out while he was running. He opened his eyes.

Maggie’s side felt better, so she lay down beside him. She crossed her braids over her chest. Squinting up at the bright July sky, she asked again, “What do you think?”

Vern’s mind had started working. This time he shook his head because he was thinking and didn’t want to be disturbed.

When he had first heard the cry “Police!” from the top of the barn, he had had only one reaction, an instant reaction—run.

He had not questioned it or thought about it. It was the exact same reaction his grandfather would have had. Running from the police was the only intelligent thing for a Blossom to do. The police might have been put on earth to help some people, but never a Blossom.

Murder in Megara by Eric Mayer
You're Married to Her? by Ira Wood
Unstoppable Force (Force of Nature Series) by Barton, Kathi S.
Delphi Complete Works of Nathaniel Hawthorne (Illustrated) by HAWTHORNE, NATHANIEL
The Fan Man by William Kotzwinkle
The Secret Life of the American Musical: How Broadway Shows Are Built by Jack Viertel
The Notebook by Nicholas Sparks
6 Rainier Drive by Debbie Macomber
The Lurking Man by Keith Rommel
B007XKEWAE EBOK by Lawson, Nicola
Our partner