Read Nothing Left to Burn Online

Nothing Left to Burn 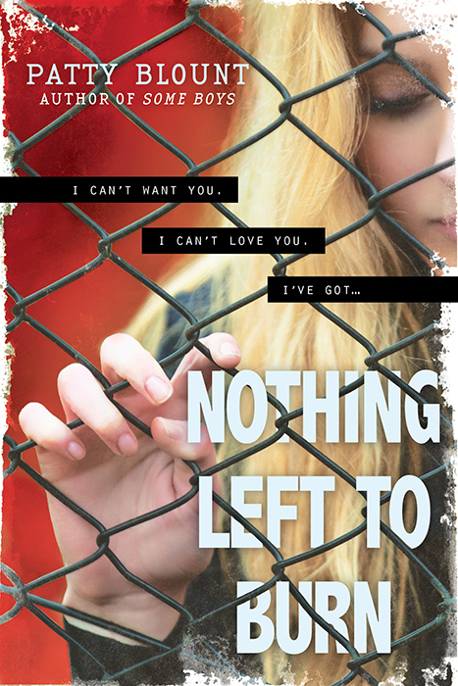 Nothing left to burn / Patty Blount.

Summary: Desperate for forgiveness from his father, Reece, who survived a car wreck that killed his brother, joins the grueling cadet program at his father’s firehouse and grows close to fellow cadet Amanda until she is implicated in a string of arsons.

An Excerpt from
Some Boys

For Amanda Pitcher, who makes me feel like the best author who ever was.

Home is where the heart is—unless you’re me.

My steps slowed on my way to the front door, the ball of ice in my gut abruptly melting into this floe of guilt the second I heard their raised voices, every word pounding another stake through my heart.

“Why? You think he’s gonna, what, rise up from the dead and say ‘Thanks for keeping my room the way I left it?’ Stop dreaming, Abby.”

“I’m not dreaming, John. I’m grieving. Just like you and Reece.”

I couldn’t actually hear him snort, but that’s what he usually did whenever he heard my name. I mean, that’s what he
used to
do. Lately, he did this thing where he’d hesitate for a second, like he was swallowing back a curse.

“That…kid. What the hell were you thinking, letting him drive at fifteen?”

And there it was, Dad’s favorite fill-in-the-blank Mad Lib. You had your pick—
goddamn
,
stubborn
,
thoughtless
,
careless
,
skinny
,
weird
,
freaky
… Extra points if you added a vulgar expletive.

I shut my eyes and gulped back the scream that had clogged my throat since Matt died, since I…killed him. I tugged on Tucker’s leash and turned away from all the shouting and the grief and the hate and just kept walking.

I jerked and found myself sitting on Alex’s front steps with no memory of walking the three blocks to his house. Tucker’s leash was still gripped in my hand. A lifeline. “Hey, man.”

“Whoa. What happened?” Alex took one look at my face and sat next to me on the top step, iPad forgotten in his hand.

I shook my head. “My parents.”

He blew out a breath, fanning the hair that was always in his eyes. “Oh. So I guess that means you didn’t talk to your dad?” he asked with his usual precise diction.

I hunched my shoulders. Tucker whined at the jerk on his leash.

“Reece. You
have
to talk to him. You promised—”

I shot to my feet. “I
know
. It’s just…he’s not the easiest guy in the world to talk to.” Or be near. Or be related to. Oh, he didn’t beat us or anything like that. He just…didn’t care. “I’m writing a note.”

Alex didn’t say anything. He just reached down and scratched Tucker’s head. The dog climbed up the steps, put his head in Alex’s lap, and stared up at him with big happy eyes, grateful for the attention. I tried not to be insulted. “Can I hang out here for a while?”

Alex grinned and handed me his tablet. “Up for some chess?”

What the hell. I shrugged, unlocked the device, started a new game, and moved my pawn. Alex made his opening move. We were silent, just passing the tablet back and forth between us. Soon, the screen flashed, and Alex sighed.

I shot him a questioning look. Since we’d met in chess club in fourth grade, I’d beaten Alex Boyle only eighty-six times. For us to reach an impasse during a game was statistically more improbable than winning the lottery. “You throwing games now?”

His eyebrows shot up, and he shook his head. “No. But I was trying out a new mating pattern.”

I nodded but didn’t ask which one. It didn’t matter.

He closed the iPad’s cover and gave Tucker a head pat. “So you’re writing him a note?”

It wasn’t the worst idea I’d ever had. Notes kind of had the last word, didn’t they? Dad couldn’t interrupt a note or stalk off while it was still talking. “Yeah. It’s cowardly, I know. But at least I’ll get it all out.”

I laughed. The idea of my dad
changing
was even less likely than winning the lottery. “No. No, I have to go, Alex. It’s not just my dad. It’s Mom too. She looks at me and sees Matt and—” I broke off, swallowed hard. I was a year younger than Matt but looked just like him. “I hurt her.” And that was unbearable. “I hurt her every time she looks at me.”

Alex watched a car drive down the street, his lips pressed into a tight line. He didn’t say anything, didn’t try to talk me out of it. He knew me better than anybody, but even he didn’t know how bad it had gotten with Mom crying all the time, Dad yelling at her for crying. I knew it was my fault, knew they needed time so they could heal. Time without me around to remind them of all the bad shit.

I turned to my best friend. “Could you take care of Tucker for me?”

Alex’s head whipped around. “You’re not taking him with you?”

“Um, no.” I quickly looked away. “I don’t want him there with me.” Definitely not.

“Reece, you’ve had him since he was born. You can’t leave him behind.”

Tucker’s ears twitched, but he didn’t move from his spot, curled at Alex’s feet. “He likes you. I know he’ll be in good hands.”

Alex stared at me, mouth open, and eventually nodded. “I will see what I can do.”

I shut my eyes and let my shoulders fall. That was one less thing to worry about. I knew my mother wouldn’t want to take care of Tucker after I was gone. I stood, walked down the porch steps, and snapped my fingers. Tucker immediately stepped to my side. “I should probably go. Thanks for the game. And the talk.”

Alex smiled, stretching the freckles that dotted his face. “Let’s get something to eat. I’ll buy.”

I was happy to delay my return home. After he dropped his iPad on the hall table and grabbed his keys, Alex walked with Tucker and me to Main Street, where we bought a few burgers and ate in the park, Tucker’s leash fastened to a bench. Tucker watched a game of Frisbee, tail wagging, wishing the disk would fly his way just once so he could snag it out of the air. In the distance, the fire alarm sounded, and a few minutes after that, the sirens wailed. I watched for the trucks, heart twisting in my chest.

Matt would have been on one of them, if he’d lived. He’d been a junior squad volunteer since he was twelve years old. At seventeen, he was finally allowed to work an actual fire scene and become a full-fledged volunteer with the Lakeshore Volunteer Fire Department. He’d turned seventeen in November.

And died in December, the day after my sixteenth birthday. It was April now, and the hole Matt left just kept getting bigger and bigger and—

I stared at Alex, wondering why he kept shaking me.

“It was an accident, Reece. You know it was.”

I laughed.
Accident
was a funny word, a word people slapped onto events and incidents with one breath and then looked for somebody to blame with the next.

That would be me.

But me? I blamed my dad. If he’d done one thing, just one thing for me the way he used to do for Matt, I never would have asked my brother to show me how to drive in the snow. And Matt would still be alive today.

Suddenly, I couldn’t wait to get home and finish my note. I had sixteen years of Dad-related crap to unload. It wouldn’t be a note; it would be a manifesto by the time I was done. For the first time since Matt died, I felt something pretty close to relief. I’d finally be able to fulfill the promise I made to my brother while the blood drained from his body. I would have promised him anything in the world to stop the blood.

Don’t you give up, Reece! Promise me. Promise you’ll fix things with Dad before you do anything.

I promised. I had to. My brother was the only friend I had until I was nine years old. Even though I knew
fix
things
with
Dad
was about as likely as me winning the Heisman Trophy, I’d do this last thing for my brother, and then I would go and let my parents live their lives without me around, constantly reminding them of what they’d lost.

“Well, I guess I stalled long enough,” I said when Alex crumpled up his wrapper and pitched it into the trash can. The shot went wide, and Tucker tried to grab it, but his chain jerked him back.

“I’ll walk back with you. We can watch some
Doctor
Who
on Netflix.”

I snorted out a laugh.
Doctor
Who
was the best emotional anesthesia I knew. My chest tightened when I thought about leaving Alex behind. I would miss him as much as I missed Matt. But there was still time.

When we reached my front door, I blew out a loud sigh, relieved I couldn’t hear my parents’ raised voices. We stepped inside, and I unfastened Tucker’s leash and hung it on the hook by the door. “Mom?”

A throat cleared. “In here.”

We found her in the kitchen, staring into a cup of coffee. She lifted eyes that were swollen and red and huge inside a face that was pale and lifeless. “I didn’t make dinner, but there’s some leftover pasta from last night if you want to reheat it.”

I shook my head and glanced at Alex. Something was wrong—off—
worse
. “No, um, we ate. We’ll just watch some TV.”

“Oh. Hi, Alex.” She blinked up at him, just noticing his presence.