Read Nothing Personal: A Novel of Wall Street Online

Nothing Personal: A Novel of Wall Street 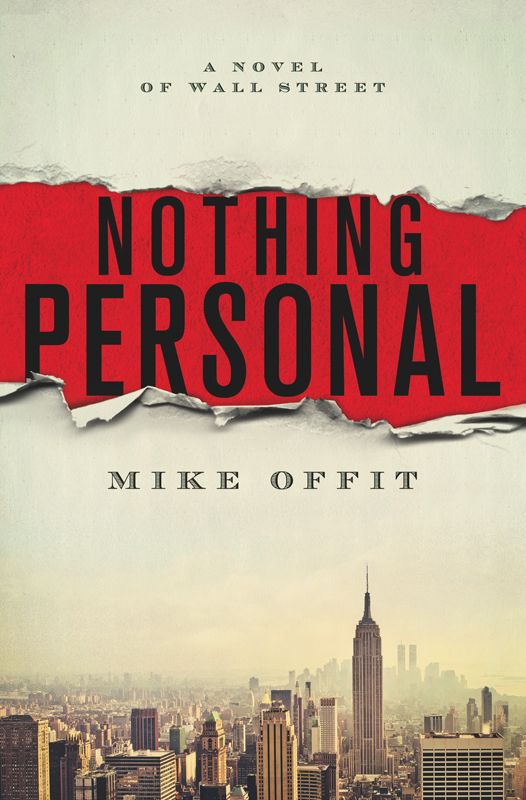 For my wife, my parents, my brother, and my children. Everything good that is in me comes from them.

From across the bay, he could see the wake before he could make out the boat. It was a Boston Whaler, coming out of Camden harbor with the throttle wide open. Plumes of spray leapt from the bow as it took the top of each wave, catching the low sun in an arc of gold. Warren knew that there would be two people on board, one his employee, the other his wife.

The porch of the main house had a sweeping view of the bay. Perched on a bluff above a cove with a double dock on pilings over the dark, cold water, the house had been the first great “cottage” to go up on Islesboro Island, made for a Scotch-Irish Boston importer who’d kept a seventy-five-foot steam cruiser tied up all summer, only venturing to cross the bay when absolutely necessary. He’d hated sailing and ships, though they’d earned him his fortune, and named the house somewhat sardonically Whales End. In the years after its construction, Dark Harbor, as this part of the island came to be known, became a favored location for large summer houses owned by the Northeastern elite. The wealthy New Yorkers, Philadelphians, and Bostonians would schedule countless sail races in the bay, and the hired crews would create diversions for their daughters and wives while the men donned captain’s hats and lusted after a series of ornate silver cups that sat in a case at the Tarratine Club.

More than any other place, Warren viewed the house as a home because he loved the severe weather, the isolation, and the perfect images that constantly appeared—the sleek patina of the well-oiled teak on the classic Chris-Craft runabout he used for hops around the bay, a small American flag snapping vividly in the breeze at the boat’s stern, in relief against the midnight blue of Penobscot’s choppy surface. It was peaceful here, and the world could, for long moments, seem pure and serene, unchanged from the pristine wilderness known to the Abenaki tribe who had plied these waters for centuries.

The trip that had brought him to this place, along with the woman on the Whaler, had started a long time before, in a landscape dominated not by the shapes of nature or the forces of erosion. That had been a darker vista of glass and steel, bristling with wires and singing the aching and distant tune of money. Perhaps it was the ghosts of those who had died that shimmered for a moment in the mist from the Whaler’s bow and then dissipated on the disturbed surface of the bay. But, whether it was fate that had steered them, or force of will, he knew as he stood here that he had come through, and that, surely, he would never go back.

Count Lorenzo Corelli certainly didn’t look anything like his name. He was balding and stout, with a jowly face that receded into a weak chin. He dressed more like an old economics professor than an Italian nobleman—understandable, as he actually spent eight months a year teaching microeconomics at Columbia Business School. His students were obligated to sit through Corelli’s tedious examinations of “the dismal science”—today, that meant how bananas would theoretically be priced on an island with no other products and only monkeys as consumers. It was left to the students to figure out how this model might someday be applied to an actual job in the real world. For his part, Corelli rarely tried to enliven the material, having long before decided that, even in so inexact a discipline as his, he would grade generously those who simply recited his lectures on all exams without thinking or dissension. This practice would, he reasoned, prepare them well for life in most of corporate America.

At the front of the amphitheatrical classroom, Corelli sat at his desk, occasionally rising to scribble on the blackboard, while some of his students took notes, others dozed, and a few at the back whispered and giggled. One of the members of this group was Warren Hament, his long brown hair and black jeans distinctly out of step with the pervading aura of a working weekend at IBM headquarters. Hament was twenty-five, about five feet ten inches, with an athletic build and wide, even features, his blue eyes lending his face an intensity that did not match his sardonic, easygoing manner. The remnants of a deep suntan made him appear much healthier than most of the other students, many of them a pale, greenish white in the harsh fluorescent lighting. The only times that Warren seemed to focus on Corelli were during his occasional segues into a disapproving pontification on the economic policies of the new president, and his prediction of a powerful and lasting depression by the end of his first term.

“The so-called Reaganomics solution to the middle and underclasses’ problems,” Corelli was expounding, “is ‘trickle down’—simply to put so much food on the tables of the wealthy that a few crumbs will fall to the floor, where the huddled masses may fight for the scraps.”

“He sounds kind of bitter,” Hament whispered to Eliza Roberts, who sat to his left.

Eliza smiled and brushed back her short, black hair, leaning closer to Warren. “From what I hear, Reagan’s going to sign an executive order deporting all economists to Haiti to work on banana hyperinflation.”

The last provoked a stuttering laugh from Chas Harper, a seat over from Eliza. “Jesus, Eliza, if he did that, there wouldn’t be anybody left in Cambridge.” Harper’s voice held a mixture of Old New York and the Maine Coast, and his white-blond hair, prominent forehead, and ice-blue eyes confirmed the lineage of forty-room cottages and Hobe Sound winters.

“No loss,” Eliza, an MIT graduate, responded, “except that I’d sell my L.L. Bean stock.”

Corelli stopped in midsentence and peered over his glasses at the group in the back of the classroom. “If you three in back have a dissenting opinion, you’ll get every opportunity to express it on the final exam. I might remind you that all three of you may have to delay your careers a few months if you don’t amuse me as much as you evidently amuse yourselves.” Corelli’s scathing tone perked up the front rows, and faces turned to see what response might come from the clique. Warren was one of the few students who dared to disagree with the professor during classes, taking issue with him on economic as well as political points.

“Thank you for pointing that out, Professor Corelli,” Warren responded, not wanting to disappoint the crowd. “Any more delayed careers in this room and we’d be able to start an economics think tank.”

More than a few titters broke out.

Corelli stared at Hament for a moment in indecision and chose to laugh with the joke. His expression betrayed mild annoyance, but he’d usually seemed to enjoy the occasional debate. “Mr. Hament, if we had a department in playing the dozens, I would nominate you for the chair. If you don’t mind, though, I would like to get on with this class.”

“By all means, sir. We are anxious to hear how it all winds up on Monkey Island.”

Corelli heaved an exasperated shrug and went back to his dissection of Reagan’s tax cuts and policies.

After class broke, the small group made its way out to the lobby of Uris Hall. Harper poked Warren on the shoulder. “Hey, Hament, I hear you’re quite the tennis player.” A slight gap-toothed smile crossed Harper’s face.

“Oh, boy. Am I about to get invited to play doubles against you and some ringer?” Hament knew that Harper, despite his collegial and somewhat goofy manner, was intensely competitive and generally a good athlete. He’d worn Warren down to a gasping wreck on a morning jog and had a Junior Olympics ski-racing jacket that Warren assumed was real.

“No, I thought you might want to visit me over spring break down in Florida. My grandfather’s got a place, and I’m going to need a doubles partner for the tournament at the club.” They were walking through the main gate to the campus, heading across Broadway.

“C’mon, Chas, you’re going to import a New Yorker to knock balls around at Hobe Sound? What if we win? Wouldn’t that look great on the trophy? I can see it—1924 champions: Tilden and Cravath; 1974: Laver and Wickersham; 1984: Harper and Hebrew.” Hament was grinning. He’d heard about Chas’s family having palatial vacation homes and was excited to be invited to see one.

“C’mon, there’s no way anyone would know, except for that hair.” Chas pointed at the locks trailing down Warren’s neck.

“Right! But what about this?” Warren pointed to his nose as the pair stopped to look for a taxi.

“Hah! Doesn’t seem to hurt you with the ladies! Besides, mine’s twice as big and busted. Listen, Eliza and a friend of hers are going to be coming down for a few days. Oh, I forgot to mention that there’s also a Swedish family next door with four incredible-looking daughters who like to hang out on our beach.” Harper’s smile was now big enough to sail in.

“You know, it’s funny. Ever since my great-grandpa came over, it’s been an overriding goal of the Hament family to collect the Hobe Sound Blue-Blood Title Belt. Or whatever.” They flagged down a cab and gave the driver Chas’s address on East Eighty-Third Street. The two had discovered during orientation week that they lived six blocks apart and shared a ride up and back every day. Chas lived in an expensive high-rise with a doorman, while Warren’s apartment was a walk-up in a dark brownstone, but it was much cheaper, and he loved the high ceilings, big windows, and elegant mouldings.

“And maybe meet a few hot blondes?” Harper smiled and gave him a shove.

“That too. That too.” Warren nodded. Harper was known to never tire of chasing girls.

Warren Hament had come to Columbia Business School almost a year and a half ago, on what seemed like good advice. His childhood and schooling had hardly trained him for any productive employment. His father, a tennis coach, had given him the only education he knew—a game good enough to make him admired at country clubs around Millbrook, New York, where he’d lived until he was ten, and the scourge of junior tournaments in East Hampton, where they’d moved when his parents divorced. But once he’d come up against the California and Florida kids with their personal trainers, nutritionists, and entourages, his casual work ethic and big topspin shots were simply not enough.