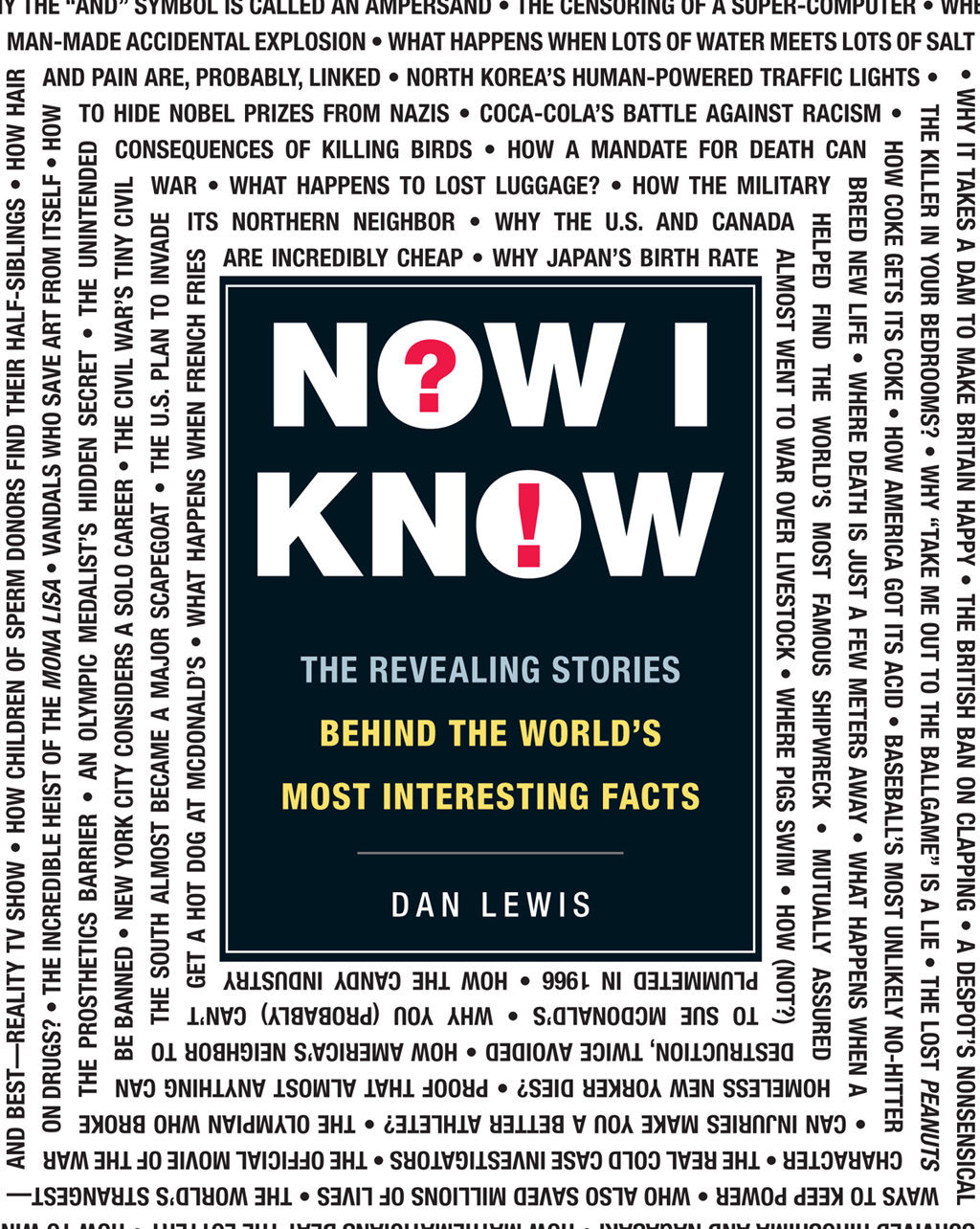 To Stephanie, Ethan, Alex, Annie, and my parents.

And, the Twenty-Seventh Letter of the Alphabet

Deep in the Heart of Wartime

The Sentence of One Hand Clapping

The Man with the Golden Arm

Pain in the Red

Lunch and a Murder

The Passion of the Money-Laundering Extortionist

A City Fit for a King

To Kill a Sparrow

Where the Bodies Go

The Free City of Tri-Insula

The North in the South

Where the Bags Go

The Two Soviets Who Saved the World

Bacon of the Sea

The Assault of Amagansett

Marooned on the Moon

Unhip to Be Square

A Date with Destiny

Thou Shalt Not Die

A Festivus for the Peruvians

Put on a Happy Face

The Bird is the Word

A Princely Meal Fit For a Pauper

The Greatest Thing Since

To Infinity and Beyond

Truth is stranger than fiction. Someone once said that. I have no idea who, but he or she is right—the most astonishing things around us aren’t made up; they’re real. Mark Twain once allegedly observed why: “Fiction is obliged to stick to possibilities; Truth isn’t.”

For more than three years, I’ve been writing about these interesting facts and the fascinating stories behind them. For example, everyone knows that airlines occasionally lose luggage, but what happens when they find it months later? If it never goes back to its owner, where does it go? We know that people landed on the moon. But what would have happened if they couldn’t get home? And what happens to the stuff they left behind, like the American flags?

In this book, you’ll find the answers to those questions, and the stories behind 100 of the world’s most mind-blowing pieces of trivia. Each entry includes a fact, the story behind that fact, and a related bonus fact. I’ve tried to connect them all in some way, piggybacking off one another, but they don’t form a logical line. You’ll zigzag from McDonald’s (why can’t you get a hot dog there?) to Daylight Saving Time (and pumpkins … you’ll see!) pretty quickly. We’ll look at the strangest reality TV show in history (it’s Dutch) and somehow wander to the world’s strangest traffic signals (they’re North Korean), all in the span of about ten pages. Together, we’ll jump around from one thing to another, always finding something interesting along the way. Chances are, wherever you wind up, it’ll be someplace interesting. (For more of this sort of thing, go to my website,
www.NowIKnow.com
. There you’ll find a lot more random facts and the stories behind them—did you know Abraham Lincoln created the Secret Service … on the day he was fatally shot?)

As each story proves that truth is stranger than fiction, you’ll be able to declare
now I know
—and that’s half the battle. So welcome to the world of the utterly strange, which couldn’t be made up because it couldn’t be true, except that, as we all know, it is. Somehow.

AND, THE TWENTY-SEVENTH LETTER OF THE ALPHABET
WHY THE “AND” SYMBOL IS CALLED AN AMPERSAND

The English alphabet contains twenty-six letters, with two of the letters—“A” and “I”—themselves also constituting words. However, another character—the ampersand (&)—was also, at times, included in the alphabet. And amazingly, the word “ampersand” is probably a by-product of the symbol’s inclusion.

The ampersand was developed along with the rest of the alphabet back in the early years of Rome in the seventh century
B.C.E.
Romans would occasionally combine the letters “E” and “T” into a similar symbol, representing the word “et” meaning “and.” It was included in the Old English alphabet, which was still in use into medieval times. When Old English was discarded in favor of the modern English we are familiar with, the ampersand maintained its status of “member of the alphabet” (to coin a phrase) to a degree, with some regions and dialects opting to include it until the mid-1800s.

Except that it was not yet called an ampersand. The & sign was, rather, referred to simply as “and”—which made reciting the alphabet awkward. As
Dictionary.com
states, it was (and is) odd to say “X Y Z and.” So, people didn’t. Instead, our lexicon developed another saying: “X, Y, and Z, and by itself, ‘and’ ”—but instead of saying “by itself,” the Latin phrase
per se
came into favor. The result? “And
per se
, and,” or, muttered quickly by a disinterested student, “ampersand.”

Why the inclusion of the ampersand in the alphabet fell out of use is anyone’s guess, but there is a good chance that credit goes to the ABC song we are almost all familiar with—that is, the one that shares its tune with “Twinkle, Twinkle, Little Star” (and borrows from Mozart’s “Ah Vous Dirai-je, Maman”). That song was copyrighted in 1835, around the time that the ampersand started falling out of favor with the rest of the ABCs.

Although Old English included the ampersand, it did not include a few letters we use today, notably “J,” “U,” and “W.” “J” and “U” did not become letters until the sixteenth century (they were, instead, represented by “I” and “V,” respectively), and “W” became a letter independent of “U” soon after.

OMG WTF IQ
THE CENSORING OF A SUPER-COMPUTER

If you’re a
Jeopardy!
fan, and particularly one who watched the show in 2004, there’s a nearly 50 percent chance you’ve seen Ken Jennings on the screen. That year, Jennings, a software engineer from Utah, won seventy-four consecutive episodes spanning 182 calendar days (due to weekends, the show’s week off in the summer, and interruptions from various tournament and special episodes). His total prize money from his seventy-four wins and one second-place finish exceeded $2.5 million.

Jennings earned another $800,000 from subsequent
Jeopardy!
appearances to date. In 2005, he returned for the
Jeopardy! Ultimate Tournament of Champions
, involving 145 of the game’s biggest winners over the previous two decades. Jennings came in second, earning $500,000. And in February 2011, he and the champion of the
Ultimate Tournament
, Brad Rutter, faced off against Watson, a computer built by engineers at IBM.

Watson beat the two human champions, earning $1 million for a pair of charities. Jennings earned $300,000 and Rutter $200,000 for third place. (Each of the humans donated half their winnings to charity as well.) Watson’s programming team fed the computer more than 200 million pages of data from sources such as Wikipedia, news articles, dictionaries, and thesauruses. Although Watson succeeded in beating Jennings and Rutter, its creators realized that it had a flaw—Watson had a difficult time, to say the least, understanding slang and the nuances of the English language. Around the same time the
Jeopardy!
episode aired, Team Watson introduced a new data source to the machine’s databanks—entries from the slang and shorthand website Urban Dictionary.

Founded in 1999, Urban Dictionary invites users to suggest and vote on words and phrases that have entered our collective lexicon but aren’t generally accepted, at least not by sources such as
Merriam-Webster
’s or the OED. Over the years, the website has gained acceptance in more formal environments; for example, according to
www.thesmokinggun.com
, it was used as a source by federal prosecutors when a suspect posted to Facebook about how he intended to “murk” someone. (“Murk,” per Urban Dictionary, means, “to physically beat someone so severely, he ends up dying from his injuries.”) But it also includes a bunch of terms that contain vulgarity and, when used without an appreciation for the connotation of the terms, shouldn’t be used in certain environments.

Watson lacked that appreciation. As reported by
Fortune
, the computerized
Jeopardy!
champ “couldn’t distinguish between polite language and profanity,” even using some choice, bovine-related language when telling its programmer-researchers that they were incorrect about something. The researchers added profanity filtering to Watson’s programming, but this proved inadequate given the extensiveness of Urban Dictionary.

Finding no alternative—unless one wants to build a genius robot that swears like a sailor—the researchers removed Urban Dictionary from Watson’s database.

Ken Jennings’s incredible
Jeopardy!
run almost got derailed before it truly started. On his first episode of the show, the Final Jeopardy! question (or, in
Jeopardy!
parlance, “answer”) was “She’s the first female track and field athlete to win medals in five different events at a single Olympics.” Jennings, with $20,000 going into Final Jeopardy!, led his two opponents. In second place was Julia Lazarus, who had $18,600. Lazarus waged $3,799, but got the answer incorrect, writing “Who is Gail?” (she later told host Alex Trebek that she had no idea what the correct answer was), bringing her total to $14,801. Jennings wagered $17,201; if he got the answer right, he’d win, but a wrong answer would send him home (and in last place for the day). He wrote “Who is Jones?”—a somewhat ambiguous response. Trebek immediately stated that the judges “will accept that; in terms of female athletes, there aren’t that many.” (The right Jones? Marion.)