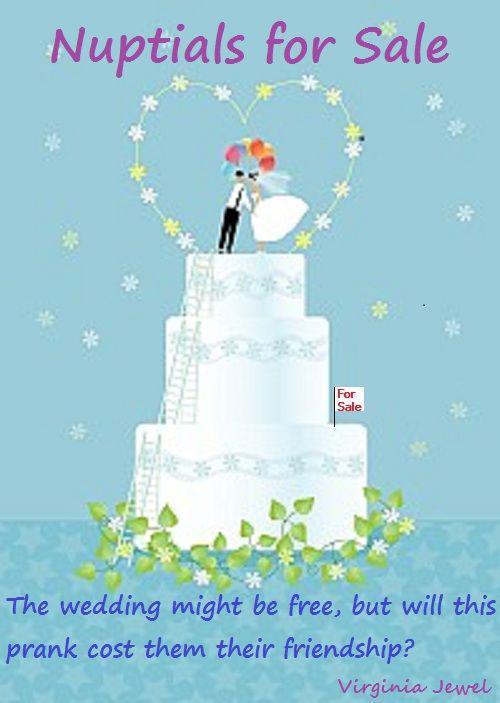 It was just a simple prank!
Broke and bored, best friends Josh and Mel headed out to the local super store for a little free fun. Feeling mischievous, Josh took control of the store's intercom and popped the question to Mel, but when a video of Josh’s fake proposal ends up on the internet, life takes a turn for the crazy. When a television producer from a popular morning show and an executive from the super store get their hands on the story, the whole thing gets out of control.
Can Mel and Josh find a way to get out of this monstrosity before it goes too far? How are they supposed to explain to everyone that it was all just a prank? Is their friendship strong enough to last through a fake marriage? What will it cost them to sell out?

Just get to class, Mel.

You can do this.

Just pretend like you don’t see them all pointing and laughing at you.

My thoughts were running rampant as I stopped in front of the door and checked the number above it with the one on my paper.  A wave of relief washed over me as I walked into my second period classroom.  I plopped down in a desk near the back.

I shuffled my papers and books, trying to make myself look busy and hide the grimace I could feel forming on my face.  My knee really was starting to ache.  The humiliation replayed over in my head.

Somehow, on my way down the stairs from my first period class, I had managed to trip over something and tumble down the last few steps.  I felt my knee scrape across the anti-skid surface as I fell to the ground. My books and papers scattered across the tiled floor.  Everyone around me turned to look and laugh.

Now, sitting in the back of the classroom, I tried to hide and pull myself together.  I looked up as other students started to trickle into the room.  A lively group walked in together and I looked down to avoid eye contact.  Seeing the comfortable way they interacted made me homesick for my old friends.  I’d tried hard not to think about them since the move, but at times like these, it was too hard not to.

I must have been too deep in my own thoughts to notice as he walked past me.  I didn’t even know there was someone sitting behind me until he leaned forward and spoke to me.

“I pissed my pants.”

I turned my head.

That’s when I saw Josh for the first time.  He was smiling a broad white smile.  His blue eyes sparkled and the blonde curls on the top of his head swayed slightly with the wind from the open window.

“In fifth grade,” he said casually, as if we had spoken many times before, “I pissed my pants in front of everyone.”

I studied his face for a second, then said dryly “Thanks for sharing.”

I turned back around to face the front of the classroom.

A quiet laugh came from behind me.  The sound of a desk scraping across the floor followed.

This time the quiet voice came from even closer, “I just thought that maybe if I told you about something embarrassing that happened to me then you wouldn’t be so embarrassed about your little trip down the stairs.”

I whipped back around.

He was leaning forward across his desk, still smiling broadly.

Later, when he insisted that I sit with him at lunch, he introduced me to the group that would become some of my best friends during my time at Nelson High.

“Who’s this?” Tyler, the high school state champion wrestler, asked as I sat down next to Josh.

“You look familiar.  Were you at the party last weekend?” Haley, the girl who would never really accept me, asked before Josh could answer.

“She’s a model.  You’ve probably seen her in magazines or something.”  Josh said nonchalantly as he stole a chicken nugget off my tray.  He said it with such authority that even I believed him.  I sat timidly between Josh and his friend Greg.

“Are you really?” Greg asked after a few seconds of silence.

Josh grinned, “Trip, this is the gang.  Gang, this is my friend Mel, but you can call her Trip.”

“Oh my God!  You’re the girl who fell down the stairs, aren’t you?” Haley’s face brightened as she realized how she knew me.

“Hey, a girl needs to make an entrance, and I think Trip did a fantastic job of it.” Josh gave me a wink and then abruptly changed the subject.

Everything about my life changed that day.  If I had been careful on the stairs, then none of this ever would have happened.  Thinking back on it now, it’s hard to believe that one clumsy move set this whole thing into action.

“Broke and bored is no way to live.”  I plopped down on the couch next to Josh.  My boredom inspired trip to the fridge left me empty-handed and in a crappy mood.  Another Saturday night on the couch in our awful apartment is not what I wanted, but it was all we could afford.

“Let’s go out then,” Josh said without taking his eyes off the television.  He had tried to cheer me up by challenging me to some video game, but after five minutes, it stopped being fun for me and I gave up.

“Josh, we don’t have enough money to pay our bills much less enough to go out.”  My voice was a little more abrupt than I’d intended it to be, but he didn’t seem to notice.

“We don’t have to go somewhere that requires money, Trip.”  He jerked his hand to the left in an attempt to beat his gaming opponent.

“Where can we go that doesn’t require money?”

I sighed, “We can’t go to the park.  There’s been some trouble there recently and the cops are patrolling it several times a night.  I don’t want to get arrested for swinging.”

His opponent fell and Josh did a silent victory cheer.

“We could go to the mall and just walk around.”

He shut the game off and tossed the controller across the room.

“Ugh! Too many teenagers to deal with at the mall!  Besides, I don’t really want to walk around and look at all the things I can’t afford to buy.”  I threw my head against the back of the couch.  I was really starting to be a pain in the ass, and I knew it, but I just couldn’t seem to stop myself.

“Come on,” Josh hopped up from the couch and held his hand out to me.  “Let’s go.  You’re starting to annoy me and I’ve got to get you out of here.”

I made a face at him and crossed my arms against my chest.  He wasn’t daunted.  He reached down and grabbed my arms, pulling me up from my seated position.

“Where are we going?”

Josh pushed me out of the apartment and into his car.  I kicked the trash piled up on the floor around to make room for my feet.  Josh was a blast to be around, but he wasn’t much for keeping things clean.  When I’d moved into his apartment a year ago, it had taken me an entire week to clean the place so that it was suitable for human habitation.

Josh and I had known each other for almost ten years, ever since my first day at Nelson High.  We’d both stayed close to home and graduated from the state college just an hour away.  We’d always been close, so when Stephen broke it off with me a year ago and left me with nowhere to go, Josh had taken me in.  That’s the way it had always been with us.  I’d get into a tough spot, and Josh would be there to help me out.

“We’re going to SuperMart.  We don’t have to buy anything and, at this time of night, the people walking around that place are more entertaining than any movie on basic cable.”  Josh smiled at me then turned his attention back to the road ahead.

My mood lightened as we drove down the road.  The wind was blasting warm air in my window and making my hair blow all over the place.  Josh turned the radio up and sang along loudly.  In less than a minute, I joined in and couldn’t wipe the smile off my face.

The parking lot was near empty as we pulled into a spot close to the front.

“This place isn’t usually this empty.  What’s going on?” Josh turned off the car and pulled the keys out of the ignition.

“Haven’t you seen the news lately?” I shook my head at him.  “Some reporter went undercover and got footage of some of their employees’ more unsavory practices.  It’s been all over the news, how did you miss it?” I stood at the end of the car waiting for him to meet me.

He came around his side of the car shoving his keys into his pocket.  His blue eyes sparkled under the dim light of the parking lot.  The blonde hair that had once sported playful curls was now shorter and darker with age.  I watched him with a smile.  I could always count on Josh to make me feel better.

Once inside the store, we wandered through the clothing sections.  I was looking at some tank tops when Josh came around the corner wearing a black lace bra over his t-shirt.

“That’s very flattering on you,” I said with a serious voice, but with a small smile on my face.

“I thought so too, but you know what, I think I have one like this at home already.  That redhead left something very similar to this in my room.”  Josh had his head down and he was staring at his chest.  Each hand rested on the cups of the bra and he was squeezing and admiring his new padded breasts.  “Do you think I need to go up a cup size?”

Confessions of a Tax Collector by Richard Yancey
Black Hornet by James Sallis
Not in Your Lifetime: The Defining Book on the J.F.K. Assassination by Summers, Anthony
Impulsive by Jeana E. Mann
Sex at Dawn: The Prehistoric Origins of Modern Sexuality by Ryan, Christopher, Jethá, Cacilda
Cheating the Hangman by Judith Cutler
Logan Trilogy by William F. Nolan, George Clayton Johnson
Ron Base - Sanibel Sunset Detective 01 - The Sanibel Sunset Detective by Ron Base
Lone Star Legend by Gwendolyn Zepeda
Branded by Cindy Stark
Our partner