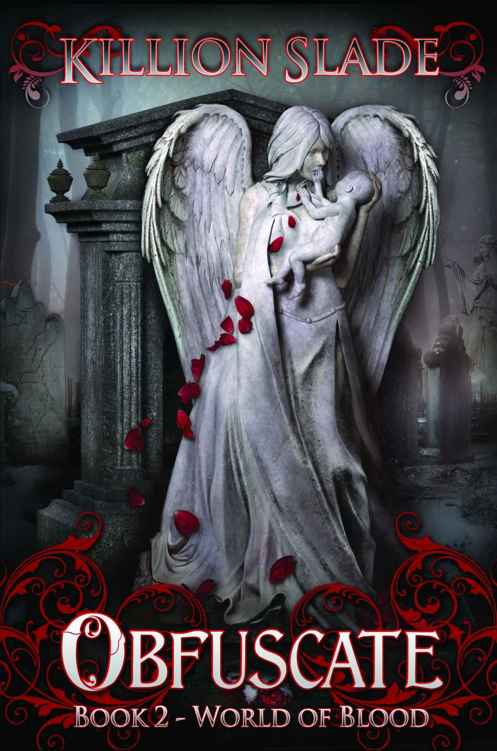 Cheyenne O’Cuinn has three tasks to scratch off her to-do list: rescue her sister from cannibalistic vampires, eliminate the man who threatens her family’s survival, and hunt down the villain who attacked and left her for dead. Not the usual to-do list for a redheaded Irish software programmer with a deadly fear of haunted houses, but all in a day’s work for a vampire.

Or maybe not. With her chosen mate by her side, Cheyenne wonders what vampire couples do for an eternity. How long does the secret sauce last? And what if she doesn’t embrace the vampiric lifestyle her mate craves?

But Cheyenne can’t press Ctrl-Z and get a do-over. Especially when terrorists launch a bombing campaign and the vampire queen plans to enslave mankind for entertainment. With Cheyenne’s family and friends at risk, this chicken-shit vampire needs to suck it up and use both her vampire and mad programming skills to track down the bad guys.

Or it’s game over!

K
illion Slade wows
us all one more time with this sequel to the fantastic novel, Exsanguinate. Full of vampires, werewolves, dragons, and so much more, this book is bound to keep you reading into the wee hours of the morning. Our heroine, Cheyenne O’Cuinn is full of fire; a fierce lead character, who gives you no option but to care about her and her story.

Killion Slade writes with a determination and pathos that bring the story leaping from the pages, straight into the real world. This book reads as a great standalone work, but I would definitely urge you to read anything else by this author, including Exsanguinate. You won’t be disappointed!

O
bfuscate is a standalone reading experience
, containing interactive content. This work currently contains links to YouTube videos. We may be adding additional links in the future. Please visit WorldofBlood.com to explore cut scenes, character dossiers, and extended versions. We encourage you to access and discover our complimentary “second screen” addition.

To both my virtual family and friends and real world family.

For without you, my dreams could not have come true.

For with you, I have found true inspiration, love, compassion, and kindness.

I
would sincerely like
to thank my editors. You simply—rock my bobby socks! I’m a huge advocate of surrounding myself with people who are smarter than myself and I never consider my editors a necessary evil.
They are necessary angels!

In taking what they have provided and applying that knowledge, it has grown my craft and taken decades of time off the books. You have made me a stronger writer through blood, sweat, tears, and gallons of whiskey. Thank you Lisa Lane, Jami Gold, Mary Ann Pedon-Coviella, and Virginia Smith.

A
ND
… where would any book be without its beta readers? I have a trusted crew to totally tell me how the cow ate the cabbage and I wouldn’t expect any less from them. I sincerely thank you for being bloody honest and helping me work out the kinks. This novel reflects your feedback and love. ☺ Thank you Ahnah, Alicia, Billie, Tara, Cindy, Ginny, Vix, and Becca!

T
hank you for being awesome
! If you have come this far, then I sincerely thank you for purchasing and reading
Obfuscate
. I hope you have already read
Exsanguinate
[Book One] and are as anxious to reunite with the characters as I was to get them back here in your hot little hands.

A couple of changes since you’ve last read. I’ve expanded on the foreign language dialects since there are so many International characters. This book includes a glossary of words and references featured in other languages to help you understand their context. There are no made up words in this book. All words have references to how they are spoken in cultures all over the world. I hope you’ll join me in celebrating the beauty of so many languages.

Lastly, I share this book with you from real, heartbreaking experiences I’ve had in my own life. Several chapters were gut-wrenchingly difficult to write, but were intensely therapeutic in my own grief recovery. My heart goes out to everyone [especially parents] who have challenges with grief and depression in their lives. This book is dedicated to you. <3

I hope you will enjoy this book series, the quirky characters, and share them with your family and friends. Thank you for joining me on my journey. Let’s continue the ride!

I
n Order
of Appearance

C
heyenne O’Cuinn
- Heroine
of the story. Lead programmer developer for the mass-multi online role playing game (MMORPG) ExsanguiNation. Is afraid of haunted houses and has yet to embrace the vampiric lifestyle.

K
haldon Seters
- Senior engineer for ExsanguiNation and online boyfriend to Cheyenne for over two years. Former lover to Amicula Darkrose and in ancient feud with Draconis La Rivière.

L
udovic Zyryanov
- Vampire
henchman who works for Amicula Darkrose and runs Breeding Den Facility #42. He is in love with Dakota O’Cuinn and regrets the things that have happened to her.

T
orchy Gravenor
- Welsh Dragon
who is best mates to Khaldon Seters and is in love with Sheridan O’Cuinn. Torchy owns The Super Market locations all over the world.

H
arris Archer
- Game
tester and network programmer for ExsanguiNation. A werewolf who was Cheyenne’s college roommate for three years. Has become like a brother to the O’Cuinn sisters.

K
iernan O’Cuinn
- Cheyenne’s
father who has been enthralled for years and is not aware of his wife’s existence.

V
halencia De La Fuente
- Female progeny to Khaldon Seters. Is a master thief and locksmith. Proficient with the rapier sword and fashion.

C
hlodochar Lothar (Chuck
)
- German alchemist of the group, but very handy with a chainsaw. Heavy blacksmithing and sword maker.

S
heridan O’Cuinn
- CEO
of the MMORPG ExsanguiNation and Cheyenne’s oldest sister who is falling in love with Torchy Gravenor.

A
isling O’Cuinn
- Cheyenne’s
mother who was murdered nine years prior who is imprisoned to the vampiric queen in service to the throne. Her existence must be keep secret from her family.

A
micula Darkrose
- Former lover to Khaldon Seters and is the niece of the vampire Queen Civetateo. Tasked to find breeders for her dhampir army and donors for the blood orchards.

C
harlie MacCarthy
- Uncle
to Cheyenne who lives in Montana on the Flying F Ranch. Manages thousands of acres, cattle, and three nuclear missile silos for the US Air Force.

M
aisie MacCarthy
- Aunt
to Cheyenne and runs the Flying F Ranch. A serious cook and generous heart but is a crack shot with any weapon.

M
ason Jones
- Flying
F Ranch Foreman. Excels in hunting and tracking but always has to have the best story in the crowd.

Sweet-Delight[ Brac Village 1] by Lynn hagen
Mine for Now - The Billionaire's Obsession #2 by J. S. Scott
Gold From Crete by C.S. Forester
Chords and Discords by Roz Southey
Exposed to You by Beth Kery
Asperger Diaries: Jamie's New School by H.B. Lawson
The Hunt by Andrew Fukuda
The Tower of Il Serrohe by Mirabal, RJ
HER ONE AND ONLY VALENTINE - by TRISH WYLIE
A Lady’s Secret by Jo Beverley
Our partner