Read Obsession (The Plus One Chronicles) Online

Obsession (The Plus One Chronicles) 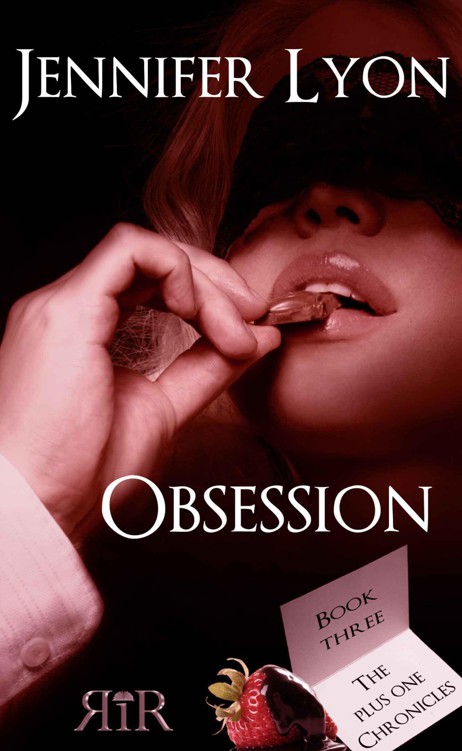 A Plus One Chronicles Novel

This book is a work of fiction. The names, characters, places, and incidents are products of the author’s imagination or have been used fictitiously and are not to be construed as real. Any resemblance to persons, living or dead, actual events, locals or organizations is entirely coincidental. All rights reserved. With the exception of quotes used in reviews, this book may not be reproduced or used in whole or in part by any means existing without written permission from the author.

OBSESSION: Book Three of The Plus One Chronicles

The Plus One Chronicles is a trilogy that is intended to be read in order:

A humongous Thank You! I wrote and published the story of Kat and Sloane because I love them with all my writer’s soul. They came to me during a very difficult time in my life, making me believe in the power of love and healing.

But what I never expected was YOU, my friends. You read the books and connected strongly enough with the characters to spread the word far and wide. I’m absolutely humbled by it, and I love each of you for telling the world when you love a book!

And you know what? Kat and Sloane were right—love and healing is out there for all of us.

All my love, Jen

I’d like to say a very special thank you to Sasha Knight who edited all three books in this series. She did a tremendous job! I’m in awe of her ability to edit both the story and the writing while staying true to the characters. All the mistakes are completely my own.

Angry tension gnawed at Kat Thayne’s neck muscles as she drove the streets of San Diego, California heading for a confrontation.

Sloane Michaels was not a killer. She would not let his mother or his guilt turn him into one. She’d already made one mistake in thinking Sloane would come and talk to her. Instead he’d sent a text message.

You will keep your security team until this is over. Not negotiable.

Her chest ached. It was bad enough that his mother had come into Sugar Dancer, dropping the bombshell about Sloane’s goal for revenge on his sister’s killer. Olivia Michaels was a horrible woman and a worse mother. Sloane hadn’t been lying about that.

His huge house loomed as she pulled up his long driveway and the security gates swung closed behind her. Kat took a deep breath, trying to get control of her anxiety. Why hadn’t he come to talk to her? Did he think Kat would abandon him when things got rough? The silence hurt. She steeled herself, refusing to withdraw and hide.

After parking her car, she stormed up to Sloane’s house, went inside without knocking and hooked a left into the family room.

Drake watched her from his chair. The man looked older and thinner since she’d seen him last night. More pain tore through Kat. In mere weeks she’d come to love Drake, and they were losing him more each day. It was destroying Sloane along with his obsession for vengeance.

But in trying to help Sloane, Kat was sure of one thing—she had an ally in Drake, and that refortified her. “Where is he?”

Slowly, Drake pushed to his feet.

Kat rushed forward to take his arm. “Bad day?” His face had a gray cast to it. The pain must be hideous. “I’ll find Sloane, you keep resting.”

“I need to move around a bit. Sloane’s in his studio.”

She adjusted her pace to Drake’s shuffling steps, taking as much of his weight as she could manage without her leg buckling. They made their way through the kitchen and into the garage. Every step seemed to be a struggle for Drake, and finally Kat asked, “Did you take pain medication?”

“Later.” He led her into the garage.

The tightness of his voice worried her. “Let’s go back in the house. You need morphine.” But that sometimes caused him stomach problems. “Or are you nauseous?”

He paused and looked down at her. “I’m okay, but Sloane isn’t. He never is after dealing with his mother.”

“He told you that Olivia came to my shop? And what she said?” Of course he had. Drake was the one person Sloane trusted. While Kat had wanted to be someone he trusted too, she was glad he had Drake. “You know what he’s planning?”

Drake nodded. “I haven’t been able to convince him not to kill Foster.” His words were as heavy as his gaze. “I’m hoping you can reach him. And that you love him enough not to give up on him.”

She sucked in a breath. It wasn’t a question of her love, but Sloane’s feelings for her. Her emotions churned into queasy anxiety. What if she couldn’t get through to Sloane?

Before she could say anything else, Drake started walking again, passing the neatly lined up cars until he reached another door. He pushed it open, revealing a massive room with high ceilings. Kat hadn’t been in here before. Mirrors lined two walls, and a third displayed martial arts weapons. The last side had weights and a heavy bag, and the center of the floor was covered in blue mats. But none of that mattered once her gaze hooked on Sloane. He wore shorts and a layer of sweat. Transfixed, she tried to follow his speed as he moved.