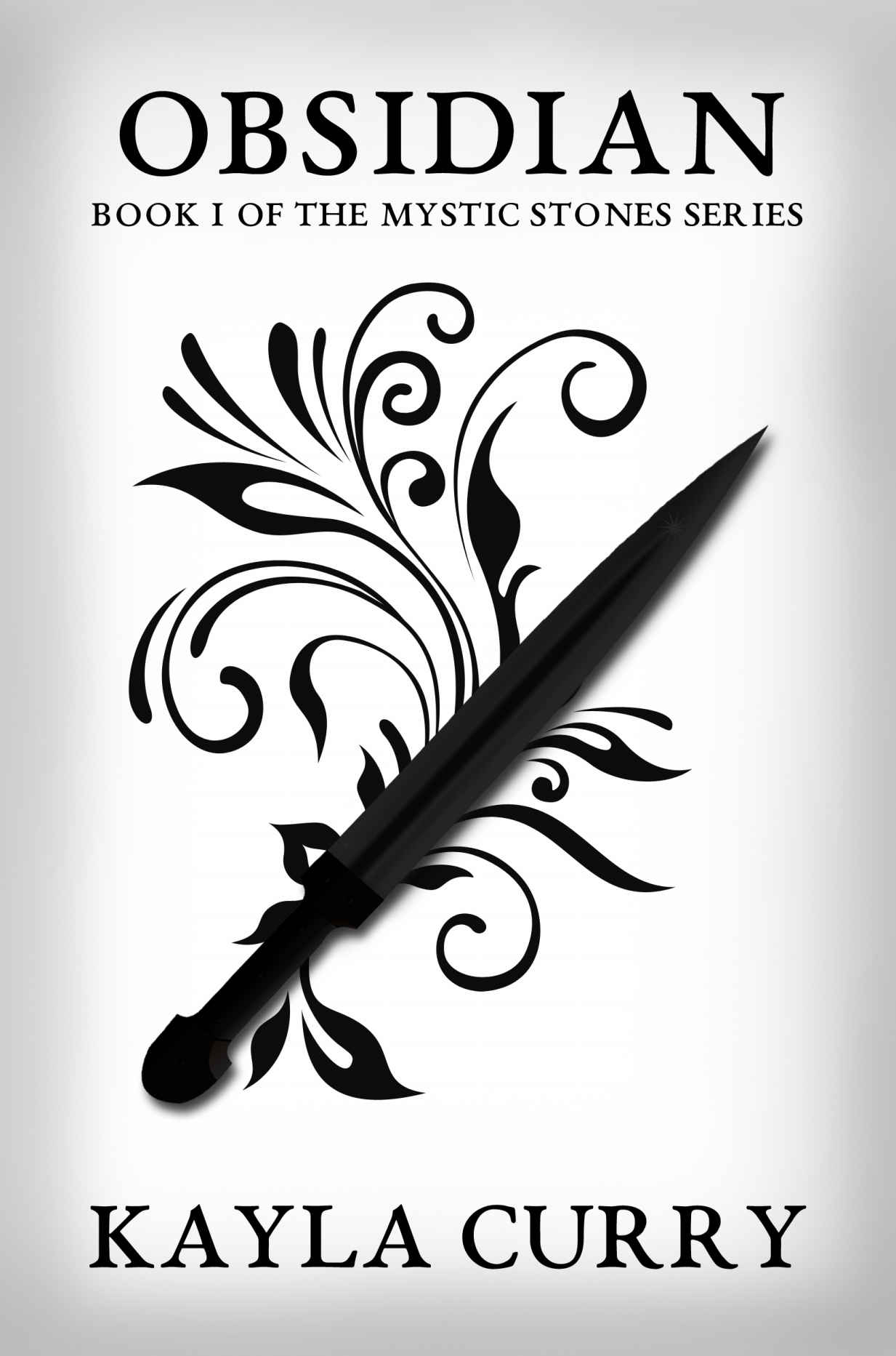 Book 1 of the Mystic Stones Series

Obsidian: Book One
– Remastered and Re-released

Amethyst: Book Three
– To be announced

Emerald: Book Four
– To be announced

Bloodstone: Book Five
– To be announced

Without limiting the rights under copyright reserved above, no part of this publication may be reproduced, stored in or introduced into a retrieval system, or transmitted, in any form, or by any means (electronic, mechanical, photocopying, recording, or otherwise) without the prior written permission of the author of this book.

To the friends and family members who may have raised an eyebrow when I told them I was writing a novel, but never said I was crazy for dreaming big. Also, to my husband and sons who put up with the constant keyboard tapping.

The sound of the world has changed since its creation. Today, we hear notifications going off in public places from all directions. Smartphones are ringing in every pocket, and our reliance on them grows. The simplest of tasks has been reduced to diodes and wires. The human race uses technology to communicate, entertain, control, and organize. Our smartphones and tablets have become our lifelines. We use them to socialize, and they are part of our everyday lifestyle. Computers control everything from buildings to the electricity that pulses through them. Each passing year brings new technology, and in five years, the technology used now will be considered ancient. Each model of the newest gadget surpasses the last.

Most of the newest technology depends on the many satellites orbiting the earth to send and receive data. If something were to happen to these satellites, the modern way of life would be dismantled. If all the satellites were out of commission, some places would even be without food. Islands, like the Hawaiian Islands, receive most of their daily supplies from ships that navigate with GPS. Of course, human life would sustain for a while. Eventually, food would run out and riots would begin. Soon, world panic will set in. Worldwide assumptions of the apocalypse will cause chaos.

Our dependence on technology grows every day. Imagine what life would be like a few years from now. Imagine how much more we will rely on our technology.

Unfortunately, we’re in too deep. At this point, we are so reliant on technology that if we were unable to use it, we would be lost. This story begins on February 2nd, 2020, when our dependence on technology has grown so immense that a simple task, like getting to work on time, is much more difficult when technology disappears.

The chiming of my old alarm clock woke me. The ancient object had become my backup in case my phone ever let me down. It had been years since I’d needed it.

I sighed. Another day at the office awaited. I went to the bathroom to shower and get ready. My Dayinfo Planner, which usually reminded me of important events and recited the weather to me each morning remained quiet. The screen showed blank except for the word “ERROR” blinking under the Psytech logo.

“Must be some kind of glitch,” I said to myself.

I walked through my empty house, half expecting one of my parents to greet me even though years had passed since their accident. I thought about the drunk driver who killed them before they could watch me graduate. The anger I had fought since the police told me the bad news resurfaced and then receded once again. I always buried it before it could take hold of me, and turned my thoughts to other things.

I finished my morning routine and then consumed my bagel, banana, and juice breakfast in minutes. I grabbed my phone before I locked up.

On my way into work, I passed people with new cars still in their driveways with the hoods up and stress lines on their faces. I reached into my purse for my phone at the next stop sign to check for any missed calls or text messages, but the screen was white.

No menu. No apps. Not even the time displayed—just a blank screen.

The phone, the cars, and my Dayinfo Planner were all acting up. I turned my attention to the sky for signs of volcano smoke or something else. Nothing.

In Hilo, humidity could be blamed for some of these things, but that didn’t account for the people with car troubles.

Driving should have been my main focus. I put the issue out of my mind until I got to work.

My car came to a stop at a light flashing red. An officer attempted to direct traffic but seemed to fail miserably. One car almost hit the officer through all the chaos. I managed to get through the intersection and the others without a collision. My outlook for the day didn’t look good.

Ten minutes later, I finally made it to work, but the security guard at the gate was manually checking badges. Apparently, the SecuriScanners were offline too. When my turn at the gate came, the guard recognized me and waved me through. I stopped briefly to ask him if he knew what was going on.

“I don’t know, Miss Tanner. I think all electronics went haywire today. No TV, no cell phones, no GPS, no SecuriScanner—I’ll be lucky if I make it through the morning without some corporate guy punching me in the face. I hate manually checking badges, it takes so long,” he said.

His name was Todd, I think. The security guards at Herrick-Peyton all blurred together with their cliché mustaches and baseball caps.

“Well, hopefully, all the really arrogant corporate guys won’t make it in due to having trouble with their BMW’s GPS system,” I said.

A polite smile and a wave from me took me past the gates and into the parking lot. The area had only about half the cars it normally did. The blue Mini Cooper I drove fit perfectly into the stall. I was thankful I bought it a year before all new cars came outfitted with GPS as mandated by the government. I had dodged at least one bullet today, thanks to my distaste for GPS.

Tracking Bear by Thurlo, David
Daughters of Fire by Barbara Erskine
Insanity by Susan Vaught
Sun Wolf 1 - The Ladies Of Mandrigyn by Hambly, Barbara
Defiant Impostor by Miriam Minger
We Float Upon a Painted Sea by Christopher Connor
LuckoftheDraw by Jayne Kingston
Get It Done When You're Depressed by Julie A. Fast
Worth the Chase by J. L. Beck
PARADOXIA by Lunch Lydia
Our partner