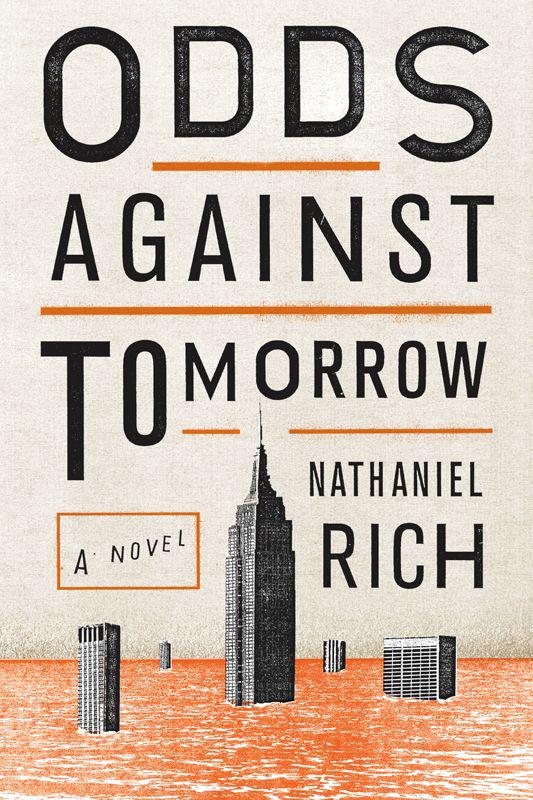 Every Silver Lining Has a Cloud

New York makes one think about the collapse of civilization, about Sodom and Gomorrah, the end of the world. The end wouldn’t come as a surprise here. Many people already bank on it.

The way other people fantasize about surprise inheritances, first-glance love, and endless white empyreal pastures, Mitchell dreamed of an erupting supervolcano that would bury North America under a foot of hot ash. He envisioned a nuclear exchange with China; a modern black plague; an asteroid tearing apart the crust of the earth, unleashing a new dark age. Such singularities didn’t frighten him, he claimed; they offered freedom. They opened wormholes to a sublime realm of fantasy and chaos. Worst-case scenarios, he said, were for him games of logic. How vast a nightmare could he imagine, and to what level of precision? What was possible? What should we be afraid of?

We knew that Mitchell’s “logic games” line was a bluff. Worst-case scenarios filled him with very real terror. Late in the evening he raced out of his bedroom in a panic, cheeks flushed, eyes haunted. He flipped on his desk lamp, pounded numbers into his calculator, and scrawled equations and odds ratios. It was a near-nightly ritual. The next morning we’d find him there asleep, facedown on his papers, his cheek ink stained with numbers like a prison tattoo.

None of us, to be clear, lost any sleep over Mitchell’s prophecies. We thought he was a little mad, and a little depressed, even by U. of C. standards. He may have understood numbers, but everyday life was too complex for him. We felt for him, we did—he’d had it tough from the start. His name was its own kind of worst-case scenario, a throwback to an era of midwestern Anglo-Saxon gentility.
Mitchell
. Who named their child Mitchell? Parents with high aspirations and antiquated ideals. From his mother, a stout, fair Missourian, he inherited a twangy Ozark accent, flat russet hair that lay on his head like straw at the bottom of a pigpen, and a loathing for Overland Park, his native suburb. His father, a Hungarian refugee who owned housing projects in east Kansas City, contributed an eccentric, brooding manner and a depressive sense of humor. At first we wondered how Mitchell had been admitted, but it soon became apparent that he was a mathematical zealot. During orientation he wore a series of gray T-shirts bearing the faces of “Legendary Statisticians” (this written in a pompous cursive): C. R. Rao, Leonardo Fibonacci, Andrei Nikolaevich Kolmogorov. We hadn’t heard of any of them. We suspected that Mitchell had silk-screened the shirts himself. If he wasn’t a mathematical genius, something else was wrong with him.

Put out of your mind, if you can, all the posters and magazine photographs and T-shirts bearing Mitchell Zukor’s own face. Try to imagine the great man as a college student. You would not have recognized him then. Clean-shaven, round faced, eyes dark and hooded. He was flagrantly rust belt. He looked like a swing voter. The old-fashioned crew cut, the neck reddish with razor bumps, and his retiring, timid manner gave the impression of a perversely premature descent into middle age. Had he not been assigned to our dorm, we likely wouldn’t have considered him more than a curiosity, like the chairman of the college Republicans who slept in his bow tie, or the sad, skinny girl who walked around campus cradling a ragged teddy bear.

As might be expected, he was always with the computer: in the lab during the day and at his desk in the common room at night. When friends visited, he’d participate amiably enough in the conversation for a few minutes, though before long he’d retreat to his screen, scanning the Web for articles about artificial intelligence or manned space exploration or the lives of great mathematicians. I’d glance at him uneasily from time to time. Why wasn’t he trying like the rest of us? His hunched back, expanding the fabric of a Peter L. Bernstein T-shirt, projected absolute indifference. Even when he was eating midnight takeout, or watching cable news, he seemed lost in the higher questions.

I came to know Mitchell casually over the years, but I can’t say we had any particularly meaningful interaction until shortly before graduation. I’m referring to the Puget Sound earthquake.

It’s been written that Mitchell saw it coming, Seattle—that he tried to tell the world, but no one would listen to him. This, I feel confident insisting, is pure mythology. Mitchell was prepared for disaster, sure, but he had no better idea than anyone else what was going to unfold that Tuesday. I know because I was with him.

It was a chilly autumn morning in Chicago. We were in Cobb Hall for Introduction to Russian Literature, a.k.a. Sputnik for Nudniks. A fraction of the students were first-years genuinely excited to read Tolstoy, but most were fourth-years like Mitchell and me, who needed the credit to graduate. On that terrible morning, shortly after we sat down, a murmur spread through the four-hundred-seat auditorium, growing in intensity and volume. There followed a burst of laughter and then another. My first thought was that the professor, Dziga Olesha, had canceled class, but the laughter was too harsh, too peculiar, and not at all mirthful. It was surprised, uncomfortable, even slightly deranged, the stifled sound a husband might make upon interrupting his wife and her lover: laughter as defense mechanism. In row after row, like the reverse of a wave at a baseball game, the students bent over their laps and activated their portables. I was reaching for my own when Professor Olesha entered.

He was a muscular man, low to the ground, with a bushy Leninite mustache and a supercilious varnish over his eyes. His blue oxford flapped open at the collar, exposing a repugnant coil of black hair. He pressed a button, and the large screen over the stage illuminated with an image of a municipal garden.

A girl in the second row shook her hand in the air. “Professor?”

Olesha, ignoring her, clicked his remote.

“
The Bronze Horseman
,” said Olesha. The statue appeared on the screen—the powerful horse bucking from its mountainous plinth.

Several other hands went up. Portables buzzed. A shimmer of hysteria passed through the room.

“What’s happening?” Mitchell whispered to me.

“Professor
Olesha
,” said another student. Someone coughed. Someone choked.

It was no use. Olesha, in his clotted voice, read from the poem:

“Rushing through the empty square

He hears behind him as it were

Thunders that rattle in a chorus

That shakes the pavement.”

The professor looked sharply down from the stage, a lock of hair falling over one eye.

“What is this?” The disgust was plain on his face.

“Professor? There has been a huge earthquake. In Seattle.”

“Seattle. The city is destroyed.”

Olesha swept the hair out of his eye. “I see.” Feedback squealed over the speakers. “I am sorry to hear this.”

He called up the next slide: a portrait of the young poet, his cheeks furred with muttonchops.

Two dozen students rose loudly to their feet, gathering their laptops and bags, pushing their way out of the lecture hall. There was a tussle in the row ahead of us. A female student, her face heavily flushed, had become entangled with the boy sitting beside her. In her frustration she shoved him.

“My brother lives in Seattle!”
she shrieked. She ran up the aisle sobbing.

Olesha could no longer ignore the tumult. Red with rage, he pounded the lectern twice. “For anyone who is serious about this course, I will conduct the rest of the lecture across the hall.” He marched out. Nobody followed.

Five seconds later the portrait of Pushkin flickered off the giant screen. Someone was manipulating the remote control. The lights dimmed, and a live television feed came on. The reporter’s voice was loud and hoarse in the speakers. We saw incoherent flashes of flame, glass, metal, sea. No one spoke. We were trying to understand what we were watching. Beside me Mitchell was shaking. He shielded his eyes like a child at a horror movie.

I hardly need to rehearse for you the emotion of that day, the confusion and terror, but certain images I will never forget. A naked child, covered in ash, walking dazed through a mountain of rubble. A helicopter, its blades spinning frantically, sinking slowly into the sound. A convertible impaled on a stoplight. A dozen bodies running madly in every direction, silhouetted against a swelling wall of flame. The news reporter, no doubt in shock himself, stopped talking.

The images cohered into a narrative and we began to make sense of it. The silence in the lecture hall was broken by three screams in rapid succession. These were followed by the muted whimper of hundreds of people weeping. Cell phones buzzed. But most of us stayed in our seats, transfixed by what we were seeing. Everything happened very slowly. The network, having lost several of its street feeds, held for several minutes on an overhead shot of the Seattle harbor taken from the vantage of a looming blimp. Great billows of smoke obscured downtown, so the extent of damage was unclear. For all we knew, there might have been, beneath the blooming clouds of ash, an abyss as deep as the center of the earth. “We want to hold our breath,” said the news anchor, stuttering. “Let’s not jump to any conclusions.” A correspondent called from a parking lot in North Seattle. “There is a complete cessation of regular life,” she said. “Everyone is standing outside, staring at the ground. Waiting. Staring at the ground.” The anchor thanked her. “We want,” he said, “to hold our breath.”

It seems horrible now, but I remember laughing. It started in my stomach, a light, ticklish sensation like a bubble rising, rising in my chest until it burst out in a wild guffaw. Nobody noticed—there were a lot of odd, uncontrolled noises in that lecture hall. The thought that made me laugh, though it is not at all funny in retrospect, was this: I felt that I had entered Mitchell Zukor’s head. Sitting in that hall as the smoke plumed on the screen, I felt as if I were eavesdropping on one of Mitchell’s nightmares. I felt very close to him then.

Full Speed by Janet Evanovich
Fog Bastards 1 Intention by Bill Robinson
Chain of Evidence by Cora Harrison
Such a Pretty Fat: One Narcissist's Quest to Discover if Her Life Makes Her Ass Look Big, or Why Pie Is Not the Answer by Jen Lancaster
Play a Lone Hand by Short, Luke;
More Bitter Than Death by Dana Cameron
You Better Knot Die by Betty Hechtman
The Club by Yvette Hines
Lord of the Isles: International Billionaires VIII: The Scots by Caro LaFever
That Wintry Feeling (Debbie Macomber Classics) by Macomber, Debbie
Our partner