Read Of Masques and Martyrs Online

Of Masques and Martyrs 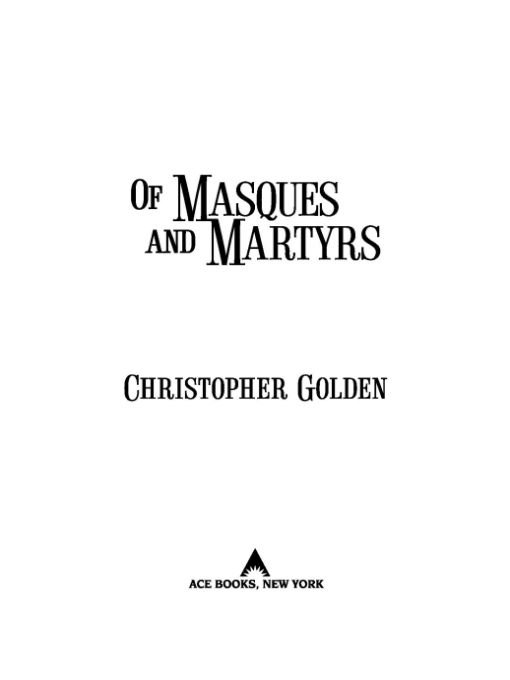 Table of Contents
Title Page
Copyright Page
Dedication
Acknowledgements
Chapter 1
Chapter 2
Chapter 3
Chapter 4
Chapter 5
Chapter 6
Chapter 7
Chapter 8
Chapter 9
Chapter 10
Chapter 11
Chapter 12
Chapter 13
Chapter 14
Chapter 15
Chapter 16
Chapter 17
Epilogue
Praise for
Of Saints and Shadows
. . .
“Golden’s book is the template for a score of books that have been published in the years since its publication. Many of those books have been bestsellers. Reading
Of Saints and Shadows
again, I was amazed how many elements now familiar in the vampire and thriller genres appeared in
Saints
first. Golden’s imagination and expert plotting wove these elements into a startlingly original book, as exciting to read now as it was when it first appeared on the rack.”
—Charlaine Harris
. . . and for the Peter Octavian novels
“Christopher Golden has reinvented the vampire myth into nonstop action, suspense, and fascinating dark fantasy. [He’s] an imaginative and prodigious talent who never lets genre boundaries hold him back.”
—Douglas Clegg, author of the Vampyricon series
“Harrowing, humorous, overflowing with plot contortions . . . abundantly entertaining. A portent of great things to come . . . a writer who cares passionately about the stuff of horror.”
—Douglas E. Winter,
Cemetery Dance
“You can damn near chase me a mile these days with a vampire novel. Talk about your boring genre . . . Then along comes Christopher Golden . . . and [he] reminds me there is no such thing as a boring genre, just boring writers. A crew to which Mr. Golden does not belong. His work is fast and furious, funny and original.”
—Joe R. Lansdale, author of
Vanilla Ride
“Golden combines quiet, dark, subtle mood with Super-Giant monster action. Sort of M. R. James meets Godzilla!”
—Mike Mignola, creator of
Hellboy
“Just when you thought nothing new could be done with the vampire mythos, [Christopher Golden] comes along and shows us otherwise.”
—Ray Garton, author of
Bestial
“Christopher Golden is an imaginative storyteller whose writing is both chilling and suspenseful.”
—Philip Nutman, author of
Cities of Night
“Golden has painted an intriguing canvas . . . filled with action, sweep, and dark mythology.”
—Rex Miller, author of
Butcher
“One of the best horror novels of the year. Filled with tension, breathtaking action, dire plots, and a convincing depiction of worlds existing unseen within our own. One of the most promising debuts in some time.”
—
Science Fiction Chronicle
“Passionate . . . excellent . . . Golden has written one of the best . . . a deep probe into the inner workings of the church and a surprise explanation for vampires. [A] brilliant vampire novel in a blizzard of bloody tooth bites this year.”
—
LitNews Online
“A breathtaking story that succeeds in marrying gore and romance, sex, and sentiment. A brilliant epic.”
—
Dark News
(Paris)
Look for all the Peter Octavian novels from Ace Books
OF SAINTS AND SHADOWS
ANGEL SOULS AND DEVIL HEARTS
OF MASQUES AND MARTYRS
THE GATHERING DARK
(February 2011)
WAKING NIGHTMARES
(April 2011) 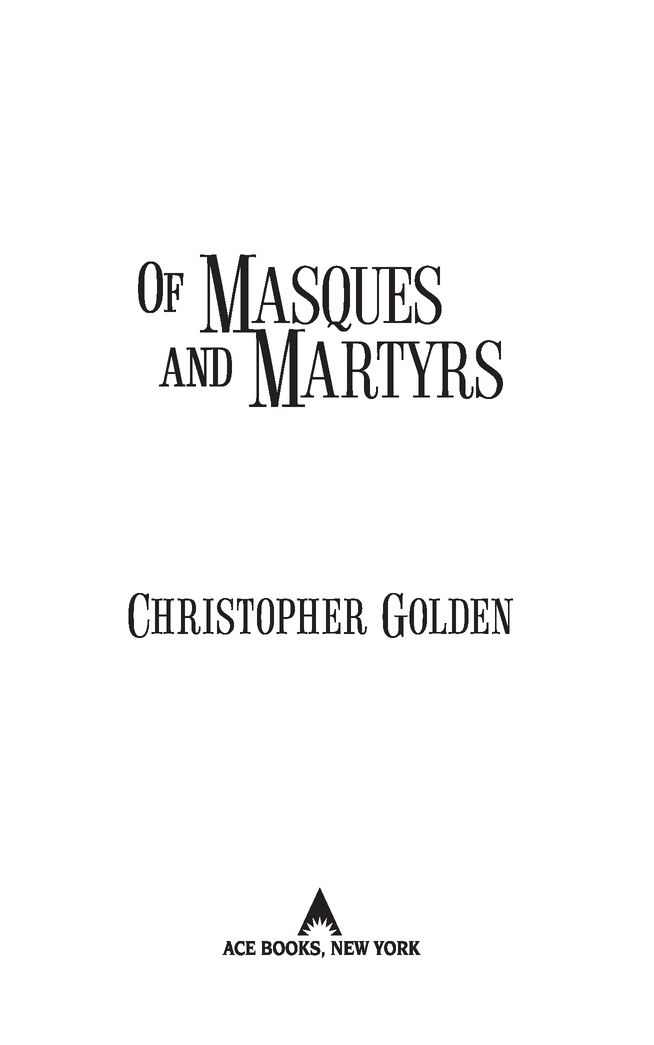 With love and respect, this one is for Jose R. Nieto, whose talent is matched only by his nobility
Acknowledgment TK
Prologue
But the tigers come at night,
with their voices soft as thunder.
—HERBERT KRETZMER,
Les Misérables
AS THE FIRST HINTS OF DUSK BEGAN TO TAINT the wispy blue spring sky above Washington Square Park, the music abruptly stopped.
A handsome young black man with a shaved head and stubbly goatee glanced nervously at the pink-edged clouds and packed his saxophone away in its case. He looked almost ashamed and didn’t meet the eyes of the muttering tourists and strolling locals who commented on the speed of his departure. He just went.
“Too bad,” said a dark-haired teenaged girl, whose ragged clothes and sickly pale face might have given the impression that she was a homeless person, if not for the three-hundred-dollar sunglasses she wore.
“I was hoping he’d play that blues riff again,” she added.
The large, blond, well-muscled man on the bench beside her offered no response but a slight nod. He too wore sunglasses, but of the cheap plastic variety. Blue jeans and white sneakers and a sweatshirt with “Sorbonne” embroidered across the front completed his ensemble.
An oddly matched pair, even to a casual observer. Not family, surely. And unlikely as lovers for a number of reasons, not the least of which was their apparent age difference. Otherwise, the two were determinedly unremarkable.
They sat and watched as the exodus continued. Dusk was coming on full speed. It had been unseasonably chilly that last week of April, and the night seemed heartened by the memory of winter, creeping quickly over the city as though full-blown spring weren’t a week away. Though growing longer, the days were still too short by far, all things considered. And the long nights were very sparsely populated. Only the foolhardy, the romantic, and the desperate tended to stay on the streets after sunset.
It simply wasn’t safe.
Parents left first, strapping infants into strollers and lofting toddlers to shoulders and whisking their families away home. Which was never very far. Even those brave or foolish enough to stay out after dark didn’t stray too far from home.
Then the sky began to grow dark. The first star appeared. And the park’s crowd thinned more rapidly. Soon, only half a dozen skateboard kids still roamed the tree-lined park—kids whose parents worked nights, or were on crack, or just didn’t give a fuck—feeding each other false courage, baying to the moon, laughing at the night. Maybe they didn’t care what happened to them. Maybe they just didn’t believe it could happen. Human nature, that was. It isn’t real unless you can see it with your own eyes, touch it with your own hands, smell it, taste it, hear it.
They’d been out there night after night after night, for months on end, those forgotten, daredevil children. Nothing bad had ever happened to them. Around them, most certainly. To people they knew, of course. There wasn’t anyone left in Manhattan who didn’t know someone who’d been taken by the night.
By the shadows.
With the coming of the night, the city began to quiet down. People were still out, but traveling in packs; in cars or on the subway. Bass beats still thumped the air outside the front doors of dance clubs, but the one-night stand had gone the way of the drive-in theater and the record player. Rarer than rare. Lunch dates were the thing now. House parties were big too. Adult sleepovers.
Still, the city was far quieter after dark than it had been a year, even a few months, earlier. On the bench where they still sat—bearing witness to the terror that had transformed daily life in New York, and so many other places across the world—the silent man and the attractive brunette girl sat and waited and listened to the way the city had changed.
The trees whispered with a warm breeze, a tease that tomorrow spring might finally triumph over the stubborn winter. In the distance, a police siren began to scream in horror. Just the first of many, like every other night. The clack-clack of skateboard wheels, of jumping and spinning and falling; the laughter of American youth—smart enough to know better but too jaded to care.
“Tonight, you think?” the young woman asked. “It’s been nearly two weeks watching these punks. I’d hate to move on. If we find some other bait, I’m sure that’ll be the night they come for our skate-boys.”
The silent blond man seemed to ponder her words. He looked at her, ice blue eyes narrowing a moment, remembering how young and arrogant she’d seemed when they’d first met, not very long after she’d been murdered on a dirty back alley in Atlanta, Georgia. She’d been sixteen when she died. She seemed so much older than that now, but looked exactly the same.
He smiled half-heartedly, and turned to watch the skateboarders again.
“Let’s hope,”
he said, but his voice was only in her head. He hadn’t spoken aloud. Couldn’t, in fact. Rolf Sechs was mute.
So they sat in silence, Rolf and Erika, as they’d done for too many nights, and they watched. On this night, they didn’t have long to wait. Less than an hour after full dark, the clack-clack of skateboards came to a clattering halt.