Read Of Mice and Men Online

Of Mice and Men 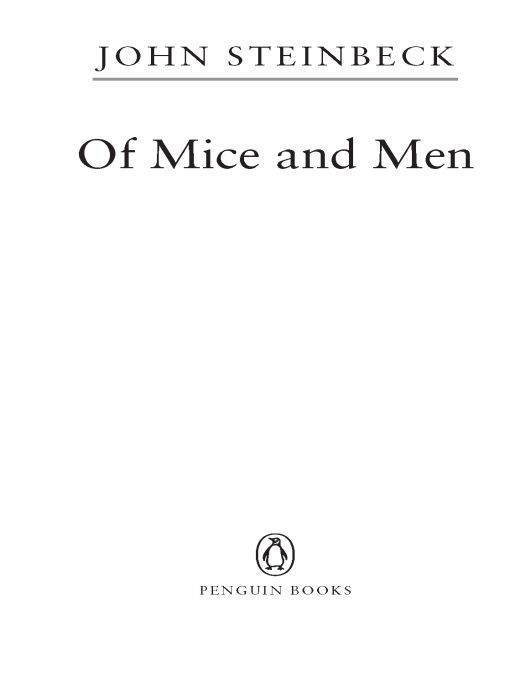 Table of Contents
Title Page
Copyright Page
OF MICE AND MEN
PENGUIN BOOKS
OF MICE AND MEN
Born in Salinas, California, in 1902, JOHN STEINBECK grew up in a fertile agricultural valley about twenty-five miles from the Pacific Coast—and both valley and coast would serve as settings for some of his best fiction. In 1919 he went to Stanford University, where he intermittently enrolled in literature and writing courses until he left in 1925 without taking a degree. During the next five years he supported himself as a laborer and journalist in New York City and then as a caretaker for a Lake Ta-hoe estate, all the time working on his first novel,
Cup of Gold
(1929). After marriage and a move to Pacific Grove, he published two California fictions,
The Pastures of Heaven
(1932) and
To a God Unknown
(1933), and worked on short stories later collected in
The Long Valley
(1938). Popular success and financial security came only with
Tortilla Flat
(1935), stories about Monterey’s paisanos. A ceaseless experimenter throughout his career, Steinbeck changed courses regularly. Three powerful novels of the late 1930s focused on the California laboring class:
In Dubious Battle
(1936),
Of Mice and Men
(1937), and the book considered by many his finest,
The Grapes of Wrath
(1939). Early in the 1940s, Steinbeck became a filmmaker with
The Forgotten Village
(1941) and a serious student of marine biology with
Sea of Cortez
. He devoted his services to the war, writing
Bombs Away
(1942) and the controversial play-novelette
The Moon Is Down
(1942).
Cannery Row
(1945),
The Wayward Bus
(1947),
The Pearl
(1947),
A Russian Journal
(1948), another experimental drama,
Burning Bright
(1950), and
The Log from the
Sea of Cortez (1951) preceded publication of the monumental
East of Eden
(1952), an ambitious saga of the Salinas Valley and his own family’s history. The last decades of his life were spent in New York City and Sag Harbor with his third wife, with whom he traveled widely. Later books include
Sweet Thursday
(1954),
The Short Reign of Pippin IV: A Fabrication
(1957),
Once There Was a War
(1958),
The Winter of Our Discontent
(1961),
Travels with Charley in Search of America
(1962),
America and Americans
(1966), and the posthumously published
Journal of a Novel: The
East of Eden
Letters
(1969),
Viva Zapata!
(1975),
The Acts of King Arthur and His Noble Knights
(1976), and
Working Days: The Journals of
The Grapes of Wrath (1989). He died in 1968, having won a Nobel Prize in 1962.
BY JOHN STEINBECK
FICTION
Cup of Gold
The Pastures of Heaven
To a God Unknown
Tortilla Flat
In Dubious Battle
Saint Katy the Virgin
Of Mice and Men
The Red Pony
The Long Valley
The Grapes of Wrath
The Moon is Down
Cannery Row
The Wayward Bus
The Pearl
Burning Bright
East of Eden
Sweet Thursday
The Winter of Our Discontent
The Short Reign of Pippin IV
NONFICTION
Sea of Cortez: A Leisurely Journal of Travel and Research
(in collaboration with Edward F. Ricketts)
Bombs Away: The Story of a Bomber Team
A Russian Journal
(with pictures by Robert Capa)
The Log from the Sea of Cortez
Once There Was a War
Travels with Charley in Search of America
America and Americans
Journal of a Novel: The East of Eden Letters
PLAYS
Of Mice and Men
The Moon Is Down
COLLECTIONS
The Portable Steinbeck
The Short Novels of John Steinbeck
Steinbeck: A Life in Letters
OTHER WORKS
The Forgotten Village (documentary)
Viva Zapata! (screenplay)
CRITICAL LIBRARY EDITION
The Grapes of Wrath
(edited by Peter Lisca) 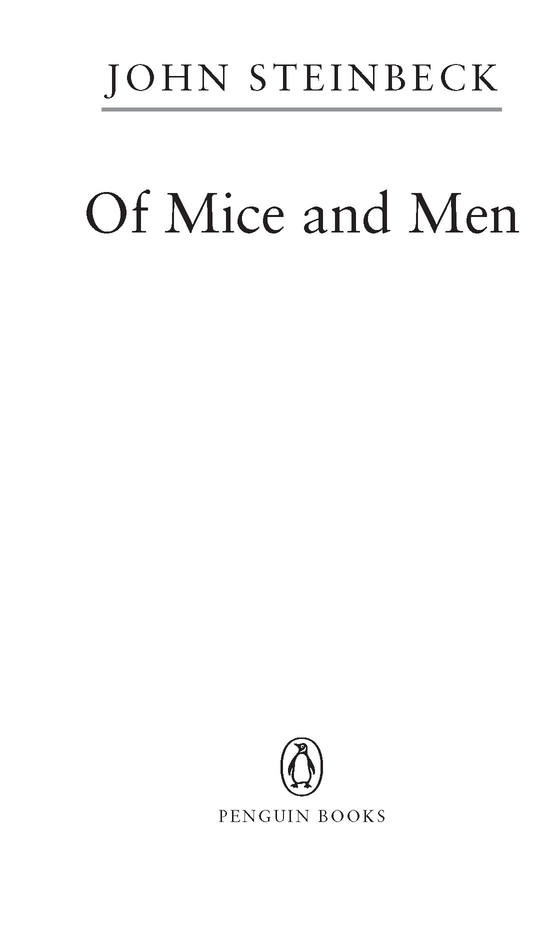