Read Of Windmills and War Online

Of Windmills and War 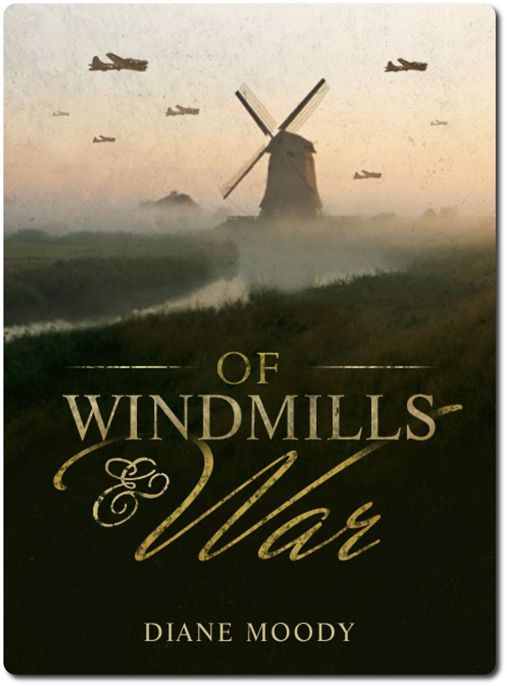 Other
Titles from OBT Bookz

Confessions
of a Prayer Slacker

Tea
with Emma – The Teacup Novellas (Book One)

Used by permission. All rights reserved.

This novel is a
work of fiction. Names, characters, places, and incidents are either the
product of the author’s imagination or are used fictitiously. Though this is a
work of fiction, many of the stories and anecdotes included were inspired by
actual events that happened in the life of the author’s father. Some names used
in this book are those of real people; however any dialogue or activity
presented is purely fictional.

this
one’s for you, Dad.

For
your service, sacrifice, and willingness

to
stand in the gap for others

both
at home and around the world.

You
were so young and yet so brave—

truly,
you were the Greatest Generation,

and
we will never forget
.

He rained down manna for them to eat;

He gave them grain from heaven.

So they ate the bread of angels;

He sent them all the food they could eat.

On
a personal note

Since 1984, my mother and
father attended the yearly reunions of the 390th Bomb Group, for which Dad
served as a co-pilot in World War II. These reunions were always the highlight
of Mom and Dad’s year, seeing old friends and new. After Mom passed away in
2007, my sister and I started attending the reunions with Dad. We have the best
time! These men who served our country at such a young age—eighteen, nineteen,
and some even younger who lied about their age to get in—still love to get
together to share war stories and never-forgotten memories. With each passing
year, we find the descendents outnumbering our war heroes at these reunions.
Still, our unique, common bond as we continue the legacy of these great men
lives on.

Year after year, I began to
notice something. Whenever one of the veterans talked about the Chowhound
Missions, they would tear up. To a man, the mere mention of those food drops to
the starving Dutch people in Occupied Holland would stir such strong emotions,
they’d have to pause to collect themselves. How was that possible after all
these decades later?

At the 2011 reunion in
New
Orleans
, while discussing
Operation Chowhound
with our good
friend Bob Penovich, I told him I was thinking about writing a novel to tell
the story behind this little-known but life-changing mission at the end of
World War II. I wish you could have seen how his eyes lit up. Bob was a B-17
pilot in the 390th who often speaks on behalf of his fellow veterans, and
particularly about Chowhound
.
A few minutes later, I told my friend
Wendy MacVicar about my idea, and mentioned how interesting it would be to have
both
sides of this story—from the perspectives of the men flying those
missions and the people on the ground receiving them. Wendy grabbed my arm and
told me of a friend whose mother had been a young Dutch girl when these food
drops took place in
Holland
and had witnessed them
herself. Wendy and I both got chills. Now there was no turning back, and I
couldn’t wait to start writing.

I have never written a
historical novel before, and I must admit I was intimidated from the outset at
the amount of research required to do the story justice. But once I started, I
was totally consumed with the fascinating stories and accounts I read. What was
it like for a young man barely out of his teens to sign up to fight in a war of
this scope? What was it like for a young girl growing up in Occupied Holland? We’re
all familiar with the stories of Anne Frank and Corrie Ten Boom, but I knew
there was so much more to tell. What was it like to be a part of the Dutch
Resistance movement? And what must it have felt like to be starving during
those brutal months of the Hunger Winter? How did it feel to be constantly
consumed by death and despair all around you? And what was it like for those
young men to fly missions bringing hope and life-saving provisions to these
desperate Dutch survivors after years of dropping bombs of death and
destruction?

These were the questions that
set up camp in my soul. These were the stories I felt driven to tell. I don’t
pretend to be an expert historian. I pray I got it right, but please remember
this is a work of fiction. My goal was to write the story in such a way that my
readers would feel like they were there, experiencing this crucial moment in
our history. And if I have done my job well, perhaps they will better
understand in a new and fresh way the tremendous sacrifices of those who gave
so much.

Before I wrote a single word, I
dedicated this book to my father, Glenn Hale. I’ve grown up hearing my father
talk of his experiences in the U.S. Army Air Force during WWII. Even now, at 89
years young, he can tell you where he was on any given date back in 1944 or
1945. Several years ago we convinced him to write a memoir about those years
which have remained so deeply embedded in his heart. The memoir was a
tremendous resource for my story. But for the record, while “Danny” has much in
common with my father, Danny is a fictional character.

On
2 March 1945
, Dad and
his crew had to bail out of a crippled B-17 into
Poland
. It
would be two months to the day before he got back to Framlingham on
2 May 1945
—just
in time to take part in
Operation Chowhound.
And like so many others who
flew those food drops, Dad was tremendously moved by the experience. Not only
gratified to be able to help the starving Dutch people, Dad felt it was a
fitting way to thank the thousands of Dutch Resistance workers who had helped
so many downed Allied airmen avoid capture by the Germans.

Over the years, Dad has had
several opportunities to take some rather nostalgic rides in the vintage B-17s
still flying, primarily the
Liberty Belle
and the
Memphis
Belle.
On two
of these occasions, I had the privilege of accompanying him on these flights.
To see the local media gathering around my rock-star Dad was such a thrill.
With all those microphones thrust in his face and cameras rolling, his message
has always, always been the same—“We must never forget.”

With textbooks sparing only a
short paragraph or two to cover the entire scope of World War II, our future
generations will know nothing about the great sacrifices made for them in the
name of freedom. Not long ago we heard about a group of students visiting the
Eighth Air Force Museum in
Savannah
,
Georgia
. The
docent leading their tour, a P-47 veteran from WWII, was asked, “Did you serve
in World War eleven?” Sadly, the person asking the question was the teacher.

If my story helps remind even
one person about the hard-fought and precious gift of freedom, then I shall
consider it a success.