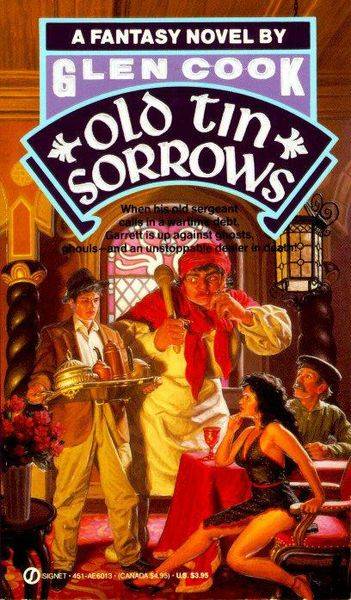 First published by Roc, an imprint of Durton Signet, a division of Penguin Books USA Inc.

If you purchased this book without a cover you should be aware that this book is stolen property. It was reported as “unsold and destroyed: to the publisher and neither the author nor the publisher has received any payment for this “stripped book.”

Just when you think you have it all scoped out and you’re riding high, old Fate will stampede right over you and not even stop to say I’m sorry. Happens every time if your name is Garrett. You can make book on it.

I’m Garrett. Sitting pretty in my early thirties, over six feet, brown hair, two hundred pounds plus—maybe threatening to shoot up because my favorite food is beer. I have a disposition variously described as sulky, sour, sarky, or cynical. Anything with a sibilant. Sneaky and snaky, my enemies claim. But, hell, I’m a sweetheart. Really. Just a big, old, cuddly bear with a nice smile and soulful eyes.

Don’t believe everything you hear. I’m just a realist who suffers from a recurrent tumor of romantic pragmatism. Once upon a time I was a lot more romantic. Then I did my five in the Fleet Marines. That almost snuffed the spark.

Keep that in mind, that time in the Corps. If I hadn’t been there, none of this would have happened.

Bone-lazy, Morley would call me, but that’s a base canard from a character without the moral fiber to sit still more than five minutes. I’m not lazy; I’d just rather not work if I don’t need money. When I do, I operate as a confidential agent. Which means I spend a lot of time in the middle, between people you wouldn’t invite to dinner. Kidnappers. Blackmailers. Thugs and thieves and killers.

My, the things kids grow up to be.

It isn’t a great life. It won’t get me into any history books. But it does let me be my own boss, set my own hours, pick my jobs. It lets me off a lot of hooks. I don’t have to make a lot of compromises with my conscience.

Trying not to work when I don’t need money means looking through the peephole first when someone knocks on the door of my place on Macunado Street. If whoever is there looks like a prospective client, I simply don’t answer.

It was a false spring day early in the year. It was supposed to be winter out there but somebody was nodding. The snow had melted. After six days of unnatural warmth the trees had conned themselves into budding. They’d be sorry.

I hadn’t been out since the thaw. I was at my desk reckoning accounts on a couple of minor jobs I’d subcontracted, thinking about taking a walk before cabin fever got me. Then somebody knocked.

It was Dean’s day off. I had to do the legwork myself. I went to the door. I peeked. And I was startled. And, brother, was I fooled.

Whenever the big troubles came, the harbinger always wore a skirt and looked like something you couldn’t find anywhere but in your dreams. In case that’s too subtle, it’s like this: I’ve got a weakness for ripe tomatoes. But I’m learning. Give me about a thousand years and . . .

This wasn’t any tomato. This was a guy I’d known a long time ago and never expected to see again. One I hadn’t ever wanted to see again when we’d parted. And he just looked uncomfortable out there, not like he was in trouble. So I opened the door.

That was my first mistake.

“Sarge! What’re you doing here? How the hell are you?” I shoved a hand at him, something I wouldn’t have dared do when I saw him last.

He was twenty years older than me, the same height, twenty pounds lighter. He had skin the color of tanned doeskin, big ears that stuck straight out, wrinkles, small black eyes, black hair with a lot of gray that hadn’t been there before. No way to pin down exactly why, but he was one of the ugliest men I’d ever known. He looked damned fit, but he was the kind that would look that way if he lived forever. He stood there like he had a board nailed to his spine.

“I’m fine,” he said, and took my hand in a sincere shake. Those beady little eyes went over me like they could see right through me. He’d always had that knack. “You’ve put on a few pounds.”

“On in the middle, off at the top.” I tapped my hair. It wasn’t noticeable to anyone but me yet. “Come in. What’re you doing in TunFaire?”

“I’m retired now. Out of the Corps. I’ve been hearing a lot about you. Into some exciting things. I was in the neighborhood. Thought I’d drop in. If you’re not busy.”

“I’m not. Beer? Come on back to the kitchen.” I led the way into Dean’s fiefdom. The old boy wasn’t there to defend it. “When did you get out?”

“Been out three years, Garrett.”

“Yeah? I figured you’d die in harness at a hundred fifty.”

His name was Blake Peters. The guys in the company called him Black Pete. He’d been our leading sergeant and the nearest thing to a god or devil any of us had known, the kind of professional soldier that gives an outfit its spine. I couldn’t imagine him as a civilian. Three years out? He looked like a Marine sergeant in disguise.

“We all change. I started thinking too much instead of just doing what I was told. The beer isn’t bad.”

It was damned good. Weider, who owns the brewery, had sent a keg of his special reserve to let me know he appreciated past favors—and to remind me I was still on retainer. I hadn’t been around for a while. He was afraid his employees might go into free-lance sales again.

“So what’re you doing now?” I was a little uncomfortable. I never had the experience myself—my father died in battle in the Cantard when I was four—but guys have told me they’d felt ill at ease dealing with their fathers man to man when that first happened. Black Pete hadn’t ever been a friend; he’d been the Sergeant. He wasn’t anymore but I didn’t know him any other way.

“I’m working for General Stantnor. I was on his staff. When he retired he asked me to go with him. I did it.”

I grunted. Stantnor had been a Colonel when I was in. He’d been boss of all the Marines operating out of Full Harbor, about two thousand men. I’d never met him, but I’d had plenty to say about him during my stint. Not much of it was complimentary. About the time I’d gotten out he’d become Commandant of the whole Corps and had moved to Leifmold, where the Karentine Navy and Marines have their headquarters.

“Job’s about the same as it was, but the pay’s better,” Peters said. “You look like you’re doing all right. Own your own place, I hear.”

About then I started getting suspicious. It was just a niggling little worm, a whisper. He’d done some homework before he came, which meant he wasn’t just stopping in for old time’s sake.

“I don’t go hungry,” I admitted. “But I do worry about tomorrow. About how long the reflexes will last and the mind will stay sharp. The legs aren’t what they used to be.”

“You need more exercise. You haven’t been keeping yourself up. It shows.”

I snorted. Another Morley Dotes? “Don’t start with the green leafies and red meat. I’ve already got a fairy godfather to pester me about that.”

He looked puzzled, which was some sight on that phiz.

“Sorry. Private joke, sort of. So you’re just sort of taking it easy these days, eh?” I hadn’t heard Stantnor’s name much since he’d retired. I knew he’d come home to TunFaire, to the family estate south of the city, but that was it. He’d become a recluse, ignoring politics and business, the usual pursuits of ranking survivors of the endless Cantard War.

“We haven’t had much choice.” He sounded sour and looked troubled for a moment. “He planned to go into material contracting, but he took sick. Maybe something he picked up in the islands. Took the fire out of him. He’s bedridden most of the time.”

Pity. On the plus side of Stantnor’s ledger had been the fact that he hadn’t sat in an office in Full Harbor spending his troops like markers on a game board. When the big shitstorms hit he was out in the weather with the rest of us.

“Maybe worse than a pity, Garrett. He’s taken a turn for the worse. I think he’s dying. And I think somebody is helping him along.”

Suspicion became certainty. “You didn’t just happen to be in the neighborhood.”

He didn’t have to explain.

There was a time when we’d gotten caught with our pants down on one of the islands. A surprise Venageti invasion nearly wiped us out. We survivors had fled into the swamps and had lived on whatever didn’t eat us first while we harassed the Venageti. Sergeant Peters had brought us through that. I owed him for that.

But I owed him more. He’d carried me away when I’d been injured during a raid. He hadn’t had to do it. I couldn’t have done anything but lie there waiting for the Venageti to kill me.

He said, “That old man means a lot to me, Garrett. He’s the only family I’ve got. Somebody’s killing him slowly, but I can’t figure out who or how. I can’t stop it. I’ve never felt this helpless and out of control. So I come to a man who has a reputation for handling the unhandleable.”

I didn’t want a client. But Garrett pays his debts.

I took a long drink, a deep breath, cursed under my breath. “Tell me about it.”

Peters shook his head. “I don’t want to fill you up with ideas that didn’t work for me.”

“Garrett!” He still had the whipcrack voice that got your attention without being raised.

“He’s got other problems. I’ve sold him on hiring a specialist to handle them. I’ve sold him your reputation and my memories of you from the Corps. He’ll interview you tomorrow morning. If you remember to knock the horse apples off your shoes before you go in the house, he’ll hire you. Do the job he wants done. But while you’re at it, do the real job. Got me?”

I nodded. It was screwy but clients are that way. They always want to sneak up on things.