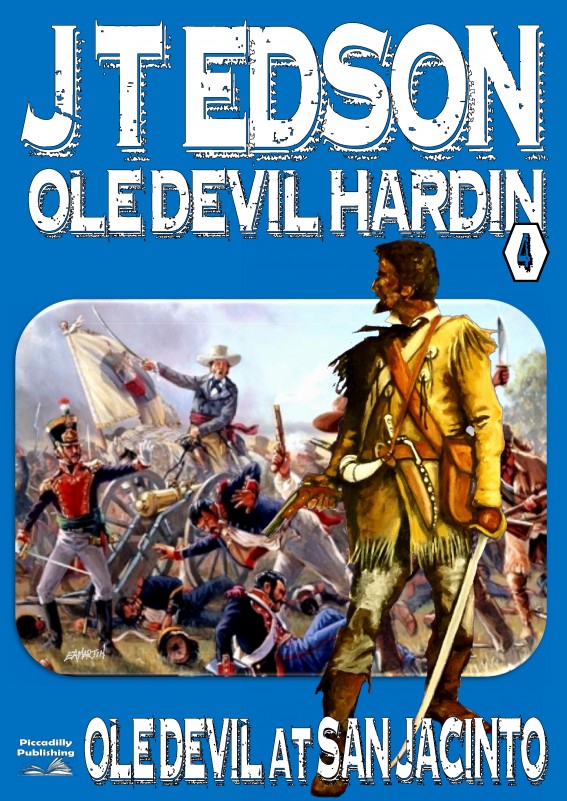 In 1835, the oppressions
of
Presidente
Antonio Lopez de Santa Anna had driven the colonists in
Texas to rebellion. Major General Sam Houston, realizing that his
small force could only hope to face the vast Mexican army when
conditions were favorable, had ordered a tactical withdrawal to the
east.

At last, on Thursday, April 21,
1836, Houston decided that the time had come to make a stand. The
Mexican
Army,
fifteen hundred strong, was on the banks of the San Jacinto river:
Houston, with half that number,
launched the attack that would decide the
future of Texas.

Among those who had supported
Houston from the
beginning and were now ready to lay down their lives in the
desperate struggle for independence was a young man named Jackson
Baines Hardin. Those who knew
him claimed he was a ‘li’l ole devil for a
fight.’

The Battle of San Jacinto gave him yet
another chance to prove it. 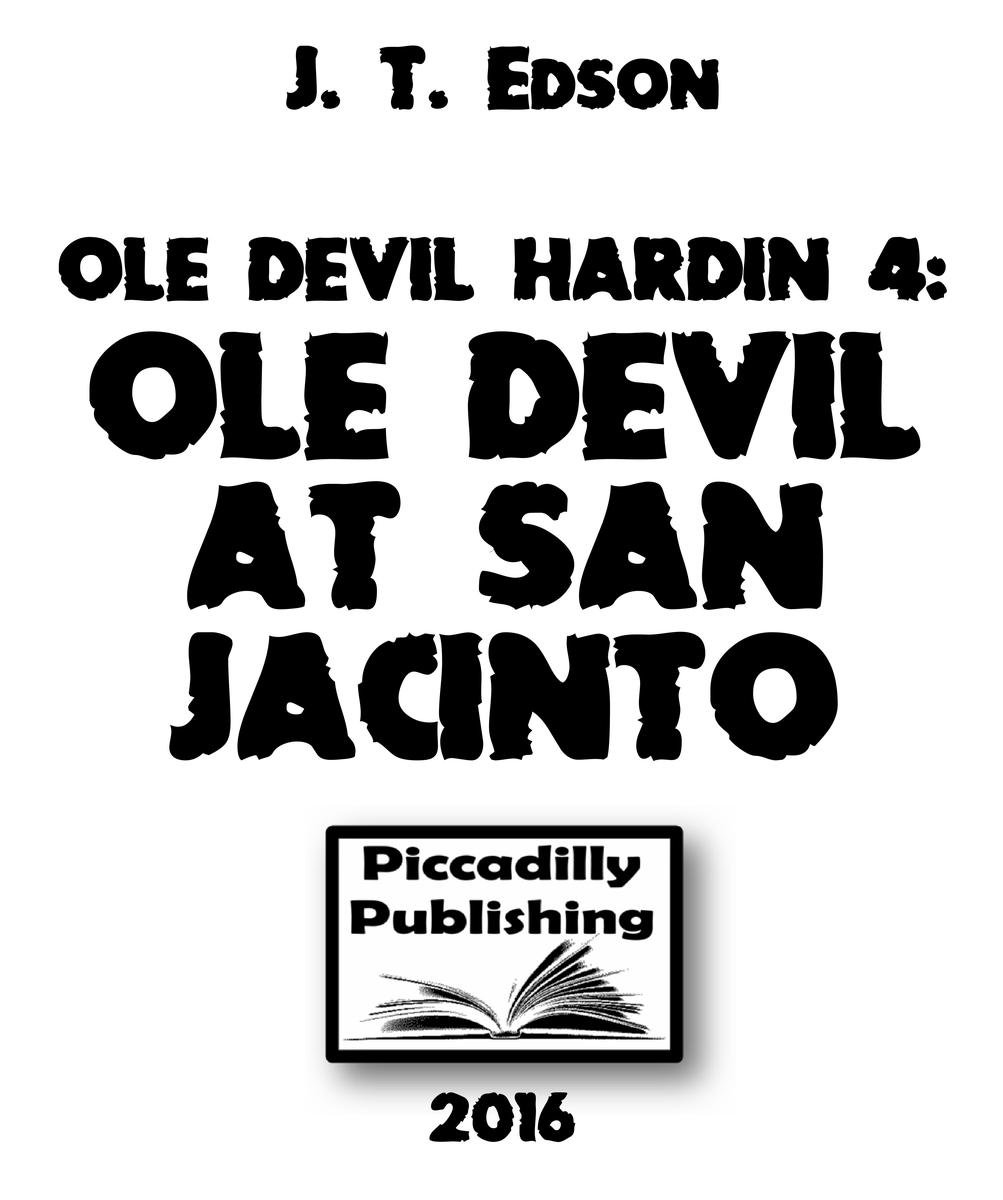 First
published by Transworld Publishers in 1977

Names,
characters and incidents in this book are fictional, and any
resemblance to actual events, locales, organizations, or persons
living or dead is purely coincidental. All rights reserved. No part
of this book may be reproduced or transmitted in any form or by any
means, electronic or mechanical, including photocopying, recording
or by any information or storage and retrieval system, without the
written permission of the author, except where permitted by
law.

This is a
Piccadilly Publishing Book

Published by
Arrangement with the Author’s Agent.

While complete in itself this
book continues the history of Jackson Baines
‘Ole Devil’ Hardin
which has been
recorded chronologically in:
YOUNG OLE DEVIL, OLE DEVIL AND THE
CAPLOCKS,
and
OLE DEVIL AND THE MULE TRAIN.
The events in the present volume are
intermingled
with those told in
GET URREA,
which for
the purposes of convenience have been
treated
as a
separate incident.

For the benefit of new readers,
but to save my
old hands from repetition, I have given the main
details of Ole Devil
Hardin’s and Tommy Okasi’s histories and armaments in the form of
Appendices.

Realizing that there was no
h
ope of
obtaining a satisfactory—or even a peaceful—settlement of their
differences with the Mexican Government,
i
particularly after
Presidente
Antonio Lopez de
Santa Anna had consolidated his position of absolute dictatorial
ruler, the colonists in the Territory of the State of Coahuila,
known as Texas,
ii
had accepted that
they must be prepared for an all out war. Even before any attempt
had been made to set up a formally constituted Republic of Texas,
Samuel Houston had been given the rank of Major General and
instructed to organize an Army. At the same time, prominent and
wealthy Texians such as James Bowie, William Barrett Travis, Edward
Burleson, Benjamin Milam, James Walker Fannin, Frank Johnson, and
the Hardin, Fog and Blaze clan domiciled on their vast land grant
along the Rio Hondo, had raised regiments—few of which had a
strength exceeding a couple of hundred men—ready for the bloody
fray they all knew was forthcoming.

The earlier stages of the
rebellion, during the last months of 1835, had been successful as
far as the colonists’ efforts were concerned. Several minor
skirmishes had gone in their favor, as had their only major
confrontation with the Mexican Army. On December 11, following the
battle
which
had lasted for six days,
iii
el
Presidente’s
brother-in-law,
General Martin Perfecto
de
Cós and his force of eleven hundred men
had surrendered to Colonel Burleson at San Antonio de Bexar. In
spite of objections from several of his subordinate officers,
Burleson had allowed all of their prisoners to return unharmed to
Mexico upon his having received Cós’s parole that he and the
released men would refrain from any further hostile action against
the Texians and
Chicanos.

The protests against accepting the parole
had proved to be justifiable.

Early in 1836, satisfied that he
had established himself in complete control of all Mexican
territory south of the
Rio Bravo—
which the Texians were already calling the ‘Rio
Grande’—Santa Anna marched north with the avowed intention of
crushing the rebellion and driving the ‘foreign land thieves’ from
Texas. With this column, blatantly disregarding the parole he had
given at San Antonio de Bexar, was General Cós.

While the earlier successes had
boosted the morale of the Republic of Texas’s all too small Army,
they had proved a mixed blessing in that they had presented a false
impression of the struggle which lay ahead. As Houston and other
far-sighted Texians had appreciated, their victories had been
gained against poorly armed, badly trained and ineffectively
commanded troops. Due to Texas being so far from the
center of Mexican
affairs, thereby offering few chances of distinction or promotion,
career officers of good quality were disinclined to serve
there.

Such men were marching north with Santa
Anna. They were leading battle hardened veterans, soldiers who had
fought almost continuously in the various inter-factional struggles
that had plagued their country ever since it had wrested
independence from Spain in 1824. As Houston knew, they would prove
a more dangerous proposition than anything so far faced by the
Texians; particularly as they would have a tremendous advantage in
numbers.

Having accepted that war with
Mexico was inevitable and unavoidable, as well as
realizing that aid
would be needed if victory was to be obtained, a Commission headed
by Stephen Fuller Austin had been dispatched to the United States
of America. They had a dual purpose, to obtain a supply of arms and
ammunition and also to sound out the possibility of having their
Republic annexed to become a part of that country. Many of the
colonists, Houston and the Hardin, Fog and Blaze clan being
prominent in their number, believed that attaining Statehood
offered their only hope for a safe and prosperous
future.

The first objective of the
Commission, handled by Marsden Fog, had been successful. A number
of volunteers had been persuaded to go to Texas and help in the
struggle. Supporters had also procured a consignment of five
hundred new caplock rifles, each with a bayonet, and a large
quantity of ammunition. For diplomatic reasons, these had been
delivered secretly and, as yet, the Army had not taken charge of
them.
iv

The
Commission
’s
second purpose was achieving less decisive results. There was no
unanimity of opinion on the matter of annexation in the United
States. While many people saw the potential benefit of acquiring
such a large area of developable land, others disagreed. Nor had
the Commission’s suggestion that, because of the enormous territory
involved Texas could be subdivided into three or four separate
States, achieved the desired agreement. The very vocal Anti-Slavery
faction opposed the idea on the grounds that to accept might lead
to the creation of more so-called ‘Slave States’. They had tried to
influence public opinion further by pointing out that a great many
criminals had ‘gone to Texas’
v
and that all the colonists were
tarred with the same illegal brush.

Being all too aware of the
disparity in numbers between the force under his command and the
army which Santa Anna would be able to put into the field, Houston
had not waited to find out the results of the
Commission’
s
endeavors. He had appreciated the folly of attempting to meet such
overwhelmingly superior strength in open battle except under his
own terms and upon ground of
his
choosing. With that in mind, on learning the Mexicans were
approaching the Rio Grande, he had ordered a withdrawal of all
colonists into East Texas. Once there, he had announced, they could
select the most advantageous point at which to make a stand and, if
things should go badly, the survivors would have an avenue of
escape by crossing the border into the United States.

In addition to carrying out the
withdrawal, the General had wanted to adopt what would one day
become known as a ‘scorched earth’ policy. By destroying their
abandoned homes, standing crops and everything else they could
neither drive nor carry away, the colonists would have left their
pursuers with a supply problem which would have grown increasingly
difficult as Santa Anna advanced further into Texas. Despite having
had the reasons for such drastic behavior explained to them, there
had been most strenuous objections to the idea. When Houston had
caused the town of Gonzales to be put to the torch, the assembled
Texians and
Chicanos
had come so close to mutiny that he was compelled to
refrain from continuing the destruction along his line of
march.

Nor was the refusal to adopt
what would have been a sound tactic
—particularly as Santa Anna was to burn
the deserted properties after looting them—the only problem facing
the General. Many of the Texians and
Chicanos,
especially the latter, who were faced with
the prospect of having to give up their homes, realized that
el Presidente
would show no mercy
to any of them who fell into his clutches. For all that, there had
not been a unanimous acceptance of the necessity to withdraw. In
fact, with disastrous results in each case, three separate parties
had elected to do otherwise.

Even before the withdrawal had
been commenced, Colonel Frank Johnson, wishing to gain acclaim and
loot, had begun to gather a force with the intention
of
—as he put
it—carrying the war to the enemy by invading Mexico along the Coast
Road. To this end, he had even gone so far as to attempt to seduce
members of Houston’s main body from their duty. He had been
thwarted in this and was still trying to raise sufficient support
when the Tamaulipa Brigade, under the command of General José
Urrea, had swept northwards. Attacking unexpectedly on February 26,
Urrea had taken Johnson’s party by surprise at the
town of San Patricio
and routed them. Although their casualties had been only sixteen
killed and twenty-one taken prisoner (they were later executed) the
remainder scattered and fled. Johnson himself had
escaped.

An even more tragic fate had
befallen the second group, but
at least their purpose was honorable and
potentially beneficial to the colonists’ cause. Under the joint
command of Colonels William Barrett Travis, James Bowie—after whom
the all-purpose, basic fighting knife
vi
which he had made famous was
named—and the recently arrived David ‘Davy’ Crockett, one hundred
and eighty-three men had volunteered to remain at the old
Franciscan Order’s
Mission San Antonio de Valera.
Built with the qualities of a fort as
much as a place of worship, it was more commonly referred to as the
‘Alamo Mission’ on account of it once having been surrounded by a
grove of
‘alamo’
plains cottonwood,
Populus Sargentii,
trees. Their assignment was to hold on for
as long as possible, delaying Santa Anna’s main force while their
comrades-in-arms were retiring to the east. In addition, they hoped
to gain time in which Houston could assemble the whole of the
Republic of Texas’s scattered forces. When these were gathered and,
possibly, reinforced with volunteers from the United States, the
General could make ready for the final confrontation. They had
accepted that, by carrying out their commitment, they might not
escape with their lives and they intended to make their deaths as
costly as
possible for
el Presidente.