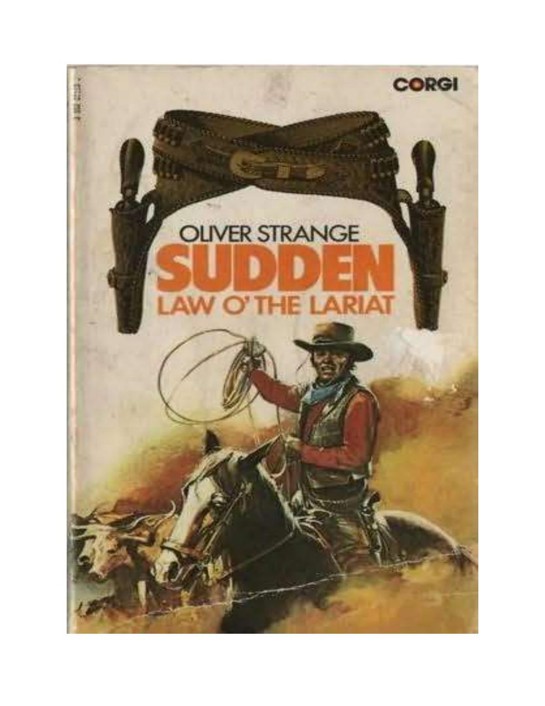 (Book 05 in the
Sudden Westerns series)

“WELL,
Forby, yu got anythin’ to say afore we string yu up?”

The
harsh question conveyed the inevitability of death, and the speaker evidently
regarded it as a mere formality. A powerfully-built man of little more than
thirty, attired in the garb of the cattle ranges, he stood rocking on his
heels, both thumbs caught in his gun-belt. His deep-set eyes, hooked nose and
outthrust jaw gave him a predatory appearance, and had the thin, cruel lips not
been concealed by a drooping black moustache he would have suggested a vulture
even more patently. That he possessed both force and passion was evident.

The
man to whom he spoke was of a different type. Older by twenty years, with
greying hair and beard, he had the strong patient face of one who plods on,
knowing his task in life is well-nigh hopeless, but doing it nevertheless to
the best of his ability. He was of those who peopled the great waste spaces of
the American continent, fighting against almost impossible odds, and wresting a
bare subsistence from the untamed soil. He sat now on a log, hands tied behind
his back, chin sunk in his chest, his whole attitude one of despair. At the
words, however, he straightened up, and his gaze went instinctively to the
rough little log cabin he had built with his own hands, the rude corral, the
patch of fenced ground, which was only now beginning to be productive, and the
stream with its shady willows and cottonwoods. He had made the place, he loved
it, and now he must leave it, perhaps in a shameful way. Somehow it seemed
unreal. The sun shone, the birds chirped, the murmur of the stream came like a
whisper, and yet the air was pregnant with tragedy.

His
gaze swept the six men who stood round in a half-circle regarding him curiously
but implacably. They were cowboys—hired creatures of the man who had spoken,
and he knew he had nothing to hope for from them; they would do as they were
bid. And then he looked their leader squarely in the face and spoke, his voice
low, steady and without rancour.

“I
can on’y repeat what I said afore—I never touched any o’ yore stock,
Bartholomew,” he said heavily.

“Yet
we find ‘em in yore pasture, with the brand changed from Bar B to Four B,”
retorted the other; adding with a sneer, “Yu chose a mighty convenient brand,
didn’t you?”

“The
Four B was my brand years afore I come to these parts, an’ I’m usin’ my own
name, too,” the older man pointed out. “If I’d done what yu say,
d’yu think
I’d be such a fool as to leave ‘em run along with
my cattle with the brands unhealed?”

“Oh,
yu dam nesters think yu can get away with anythin’, an’ yu didn’t know we
suspected yu,” said Bartholomew. “How d’yu account for ‘em bein’ there anyways?
Yore pasture’s fenced an’ cows ain’t got wings.”

“I
dunno how they come there,” said the other dully. “I was in Hope last night,
gettin’ supplies. Someone musta driven ‘em in while I was away.”

“Likely
tale that,” said the big man. “Yu done it yoreself an’ went to town to put up
an alibi. Mighty smart, but it
don’t
go.”

The
accused man shook his head dubiously. This was the end. Ever since he had taken
up his quarter section he had had to fight. He had been threatened, his cattle
stolen, his horses maimed, and once his little crop of hay for winter feed
burned, but he had hung on doggedly,
hoping
that
strict attention to his own affairs would overcome the local prejudice against
“nesters”. And this might have come about but for the hostility of the man
before him.

“I’ve
a right here,” he said, answering his own thought. “It’s State land.”

“Yes,
free to yu an’ not to me,” flashed the prisoner.

“I
was here first,” the other pointed out;
then :
“but
we’ve had all this out a’ready; nothin’s free to a rustler except a rope.”

The
seated man shrugged his shoulders with an air of resignation. “I ain’t a thief,
but seein’ yu got me thrown an’ tied, I reckon I gotta pull my freight,” he
said. “If it warn’t for my boy I dunno as I’d care; I’m tired o’ buckin’ the
odds, but he ain’t got
no one
else.”

“Pull
yore freight?” gibed the big man, a cruel scorn in his tone. “It’s too late, my
fine fella, yu should ‘a’ done that when yu were told to, months back.”

The
bound man looked at him in slow surprise. Hitherto he had believed that he had
only to quit the country, but now he saw that Bartholomew was ruthless and
meant to have his life. The charge against him was a “frame-up”, probably
contrived by the man who had condemned him, but he could not prove his
innocence. He studied the faces of the other men, but while one of them, whom
he knew as Darby, turned his eyes away, the rest showed nothing but sardonic
contempt; to them he was a cattle thief and deserved no mercy.

“Yu
boys stand for this?” he asked hopelessly.

Darby
was the only one who spoke. “Aw, boss, if he clears out o’ the country—” he
suggested.

Bartholomew
swore an oath. “No, by God!” he gritted. “Nesters is like Injuns—the on’y good
‘uns are dead ‘uns. He had notice, an’ now we’ve got him with the goods he’s
had a fair hearin’. He’s outstayed his welcome, an’ p’raps it’ll be a warnin’
to others that nesters ain’t wanted here. Get yore rope, Penton.”

The
man addressed walked to where the horses were grouped, took his lariat from the
saddle-horn and returned with it swinging in his hand.

The
command came in a shrill, childish
treble, that trembled with
rage or fear,
and every eye turned to the speaker. He had stolen up
unperceived and now stood only a few yards from the group round the condemned
man. A mere lad of about twelve, shabbily dressed in a blue flannel shirt and
faded overalls, his ultimatum would have been something for men to laugh at but
for the fact that his youthful fingers gripped a heavy rifle, the barrel of
which was directed full at Bartholomew’s breast. The boy’s features were
distraught with passion.

The
threatened man laughed. “All right, kid,” he said, and stepped towards the
prisoner, at the same tirne winking significantly to the man with the rope. The
boy, watching the leader, did not see Penton’s sudden wrist-flick, and only
realised the truth when the noose settled over his shoulders and a sharp jerk
flung him from his feet. Nevertheless, even as he fell, he pulled the trigger,
but the bullet went wide.

“Young
hell-cat,” snarled the rancher, when the boy had been overcome and bound. “If
he was a bit older I’d make a clean job of it. One o’ yu
take
him into the house an’ keep him there until—after.”

Darby
volunteered for the job, and carried the lad, kicking and mouthing boyish
curses, into the building. Bartholomew turned to the others.

“Put
a light to the shack when yu done, an’ fetch the stock along,” he ordered curtly,
and, mounting his horse, rode away without another look at the man he had left
to die.

An
hour later the boy crept from the brush fringing the
stream,
and, with a sob as he passed the smouldering ruins, made his way to the big
cottonwood in front of what that morning had been his home. A violent fit of
trembling seized him when he saw the gruesome limp form hanging from a lower
limb, and for a moment he could not move. Then, making an effort, he went on.
Beneath the body was a small heap—a worn purse, a tobacco pouch and pipe, a
locket, which he knew contained his dead mother’s portrait,
a
jack-knife
and a slip of paper. Scrawled in pencil on the paper were the
words :

With
blurred eyes, and strangling the sobs that nearly choked him, the boy read the
pitiful message.

“I’ll
shore do what’s right, dad, to that hell-hound,” he muttered thickly.

Then,
as he had done many a time before just for amusement, he climbed the tree, and
severing the rope, allowed the corpse to slump to the ground. For an instant he
clung to the branch, sick and dizzy, and then dropped down to kneel by his
father’s body. He kissed the cheek, and the cold contact sent a shiver through
him. Presently he got up, and, going to the little garden patch, returned with
a spade and began to dig.

It
was a big job for hands so young, and the sun was low in the sky before the
hole was large and deep enough. Dragging the body into it the boy covered it
with a layer of green boughs, to shield the poor clay from the earth from which
it sprang, and, ere the opening was completely filled in, he fetched heavy
stones from the stream bed and packed them in that the grave might not be
violated by wild creatures.

The
burial finished, he was about to depart, when a sudden thought came to him.
Opening his father’s jack-knife, he set to work. When at length he turned to
leave, the tree trunk bore, in letters a foot long and deeply
cut,
his father’s brand. There, in the gathering twilight,
the white letters stood out, marking the last resting place of another victim
of Judge Lynch. In the corral the boy found one pony and his own worn saddle.
For these he knew he must thank the man Darby, who, on senting him free when
the house was fired, had promised to leave them.

Everything
else was gone; and, having saddled and mounted the pony, the boy, with a last
look and a tightened throat, turned his face to the wilderness.

Taking Care Of Leah by Charlotte Howard
Opposite Attraction by Bernadette Marie
Where Dark Collides: Part 1 (Shades of Dark) by Claire Robyns
Awakenings by Scarlet Hyacinth
Best Gay Erotica 2014 by Larry Duplechan
Dangerous Loves Romantic Suspense Collection by McFalls, Dorothy
Robert B. Parker by Wilderness
The Life of Houses by Lisa Gorton
Anne of Ingleside by Lucy Maud Montgomery
Mr Gum and the Power Crystals by Andy Stanton
Our partner