Omensent: Rise of the Shadow Dragons 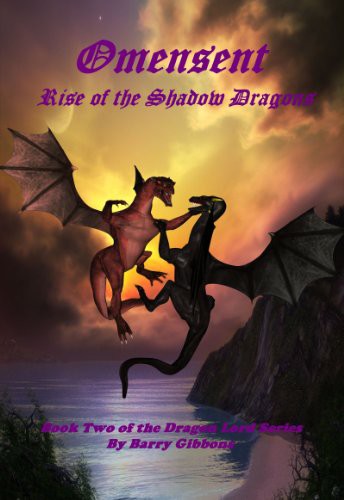 Rise of the Shadow Dragons 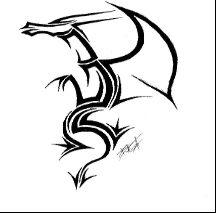 By Barry A. Gibbons

Copy Rights
©
by Barry A. Gibbons

Rise of the Shadow Dragons

This ebook is licensed for your personal enjoyment only. This ebook may not be re-sold or given away to other people. If you would like to share this book with another person, please purchase an additional copy for each person you share it with. If you're reading this book and did not purchase it, or it was not purchased for your use only, then you should return to purchase your own copy. Thank you for respecting the author's work.

The two great serpents
blasted through the night sky above the Godstear Mountains, twisting and turning as they shot between narrow gullies and over unscaleable cliff sides. The lead dragon, a lean coal black beast with dozens of deep ragged scars crisscrossing its body, flew with desperation in a futile attempt to make its escape. The dragon in pursuit, a huge crimson beast, slowly overtook the smaller creature, its eyes locked on the fleeing serpent which was scarcely visible against the darkness.

The scarlet dragon
slowly overtook the smaller beast until it was flying directly above, then it suddenly tucked its wings and dove. The sound of the two serpents colliding resounded through the mountains. They fell through the air, ripping and tearing at one another with gnashing teeth and lethal talons.

The smaller black
dragon shrieked in pain and fury, belching fire directly into the scarlet serpent's face, but the larger beast ignored the flames and latched onto the smaller dragon's wing. There was a sickening crunch, and a wet tearing sound as the wing was ripped from its body, and the black dragon screeched in agony.

The scarlet serpent suddenly released her grip on the smaller creat
ure and flared her wings, slowing her deadly descent. The black dragon, unable to fly with only one wing, continued to plummet down towards the earth where it impacted on a steep ridge side with an earth shaking crash.

The scarlet dragon slowly descended down towards the crippled creature, landing just out of striking distance,
preparing to move in for the kill.

"No!" The coal black dragon screeched in fear and pain. It was horribly injured, and bleeding freely from the stump that was once its wing. "Don't kill me!" It struggled to its feet unsteadily
, but its legs were broken and couldn't bear the great serpent's weight. "Mercy! Show mercy!"

The scarlet dragon snarled
and drew back to deliver the death blow, then it suddenly stopped, its eyes calculating. "You wish mercy, Dark One?"

"Yes! Mercy!
I beg of you!" It finally gave up on trying to stand and lay trembling at the scarlet dragon's feet.

"What are you
willing to do if I show mercy?"

"Anything!" The coal black beast
shrieked in misery.

The scarlet dragon towered ov
er the creature ready to strike. "Then you must swear that you and your vile brood will depart from this world! You shall leave, and never return!"

"Then you shall die!"

The black dragon screeched again in
helpless fury. "Wait!" It flinched back fearfully. "Don't kill me!"

The black dragon lay gasping in pain for several long moments, then finally it grumbled, "I agree."

"I swear in the sight of Draco that I will take my brood and leave this world!"
The injured creature snarled helplessly.

The scarlet dragon stepped back from the cri
ppled beast. "Go then, foul one! Go and take your brood with you! Never curse this fair world again with your evil presence!"

The black dragon shrie
ked in rage once more, then suddenly vanished into a thick black smoke which was quickly dispersed by the wind.

The scarlet dragon roared
an earsplitting roar of triumph, and then launched itself into the air and quickly disappeared into the night.

Dawn broke early over the small mountain settlement of Sevria, a growing trade town nestled deep in the Godstear Mountains. It was the middle of winter and frigidly cold, and the landscape was covered in several inches of snow. The tall evergreens that dotted the valley around the town were heavy with ice, and glittered like diamonds in the early morning sunlight.

A
lthough it was still quite early, the small town was already bustling with activity as people went about their daily tasks, doing their best to ignore their frozen surroundings.

An enormous castle
, carved directly into the mountainside itself, stood watch over the lively town. It had tall spiraling towers and massive battlements, and the stone had been painstakingly polished to a mirror-like finish. It had been carved from the mountainside only three years earlier by the scarlet dragons as a gesture of thanks for their freedom. The towns folk, many of whom were survivors of dragon attacks, had dubbed it 'Serpent's Keep'.

Damion Omensent, the lord and protector of Sevria, awoke with
the bright morning sun glaring in his eyes through the large windows of his chambers, high up in the Serpent's Keep. He groaned as he rolled over in his bed and pulled the cover over his eyes. The idea of facing yet another day trapped in the castle seemed unbearable! A hundred tedious little details awaited him once he emerged from his bed chamber, and he wasn't quite sure if he was ready to face the endless hours that it would take to address them.

He lay there for several more minutes before of heard the gentle flutter of feathers as an enormous
snowy white owl glided into the room.

"
Are you still sleeping
?" Snowfeather squawked loudly as he landed heavily on the bed.
"Shouldn't you be up and playing 'Master of the Castle' by now?"

"Ha,
ha, ha."
Damion grumbled out loud. He pulled the covers down and stared grumpily at his familiar. "At least
you
aren't expected to solve every little crisis that arises in the town!"

"That's what happens when you become the leader of men."
The huge bird chirped knowingly.
"It falls to the leader to solve everyone's problems, even the ones that they could have solved for themselves."

Damion sighed heavily, then slowly crawled from the bed. He stretched as he rose to his full height of
just over eight feet. His heavily muscled body was sculpted from years of training with a sword, and his long flowing brown hair fell across his shoulders in a tangled mess. Despite his size, he looked completely human, save for one distinguishing feature. Beginning at each temple and moving across his brows to his forehead was a thick ridge of dark red scales, much like the scales of a dragon.

Damion's
bizarre appearance and enormous size were the result of an attack by a vicious group of dragonspawn on his mother while she was still pregnant. Dragonspawn were ferocious creatures distantly related to dragons. They were the result of a wizard's experiment gone horribly wrong centuries before, and now roamed the mountains in large packs preying on those whose path they crossed.

His mother had been
violated and severely savaged by the brutal creatures, then left her for dead, but she survived to give birth to Damion five months later. She died moments afterwards, leaving Damion to be raised by his father and Lady Skie Meadowdown, a long time friend of the family. The dragonspawn's attack left its stain upon Damion, marking him for life, and infusing his blood with that of the dragons.

The attack had left its mark on Damion in other ways as well. At a very early age
, he displayed the uncanny ability to use magic. After a number of spectacular mishaps, his father was forced to send Damion away to learn how to controls his powers. He traveled to a distant valley many miles deeper into the Godstear Mountains with Lady Skie, where they lived in a large cottage with Lady Skie's father, Damarius, a strange old wizard who was well learned in the use of arcane forces. It was in that tiny valley that Damion grew up and learned how to manipulate and control his magic.

He
stared down over the growing little town as he slowly began to dress. It had been over three years since his father, Lord Michael Steelheart, had been murdered, and the town Sevria burned to ground by a dragon. Damion's life had changed drastically since that fateful day.

H
e discovered that the dragon that destroyed the town, whose name was Tempest, was under the control of a enchanted gem that was in the possession of his father's murderer, a disreputable man by the name of Kaviel. The Dragon Gem, as it was called, had been created by a mad sorcerer who trapped the entire entire race of dragons inside of a gemstone which absorbed their magical essence to be used by whomever possessed the stone.

Damion and a number of others traveled across the land
in search of the Dragon Sword, the key to unlocking the Dragon Gem's power. They discovered the sword in the clutches of clan of trolls, then after Damion destroyed the clan, he and his companions continued on to the heart of the Endless Forest where the Tempest made her home.