Read On a Long Ago Night Online

On a Long Ago Night 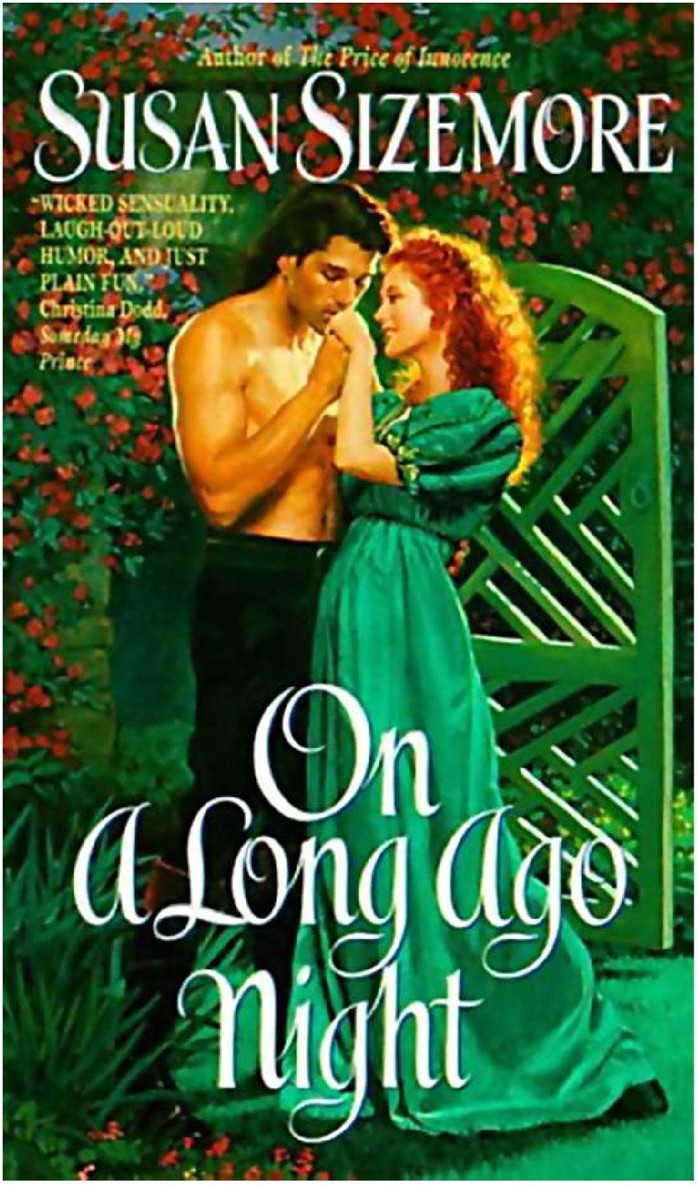 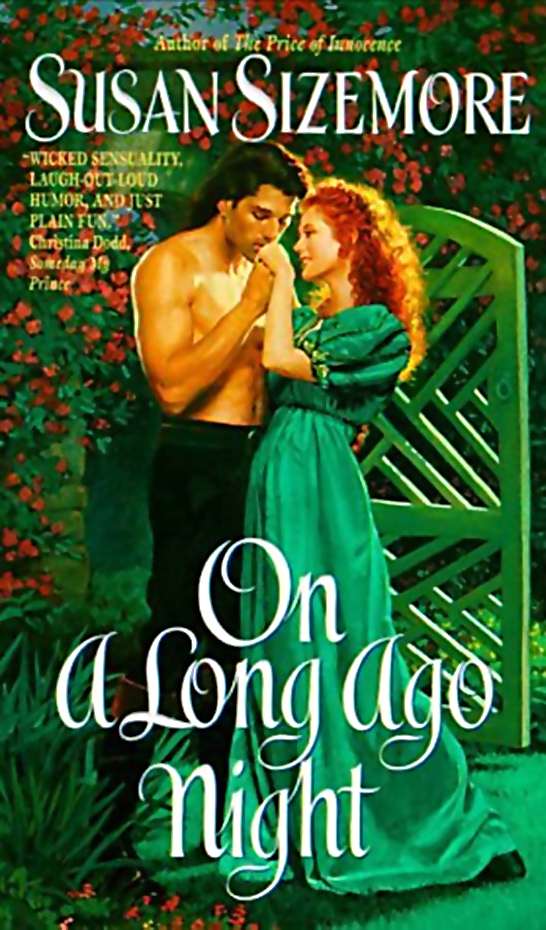 On a Long Ago

"WE HAVE UNFINISHED BUSINESS, YOU AND I."

"You remember what we were doing when we were

Honoria paled, but her voice was steady and

sarcastic when she said, "I have a vague recollection of

some minor activity we were engaged in."

James twined his fingers with hers beneath the

"In the garden," he whispered seductively.

"The birds were caged."

"The base was cracked. It leaked," she sniffed.

"There were jasmine and roses."

She gave the slightest of haughty nods. "I do recall

studying the garden in some detail."

"You were flat on your back on a bed of flowers."

James ran his thumb slowly across the back of her hand.

"We will finish what we started."

For my sister, Mary Buso.

Take care of yourself.

"I should
not
put up with this, Father. Not for a

She balled her fists at her side. "I am going to stamp

my foot now. I tell you, since you cannot see it for the

width of my skirts."

The Duke of Pyneham smiled.

He was an indulgent father. She was a loving

daughter. Their disagreements were few, and her

tendency since the death of her mother had shattered him

of her. There had been entire weeks back then when he'd

stayed in his room with the curtains shut. She'd nursed

him and coddled him and whispered and tiptoed and done

whatever else she could to bring him out of his grief.

Gradually, he'd returned to the world.

Honoria realized that what had been necessary for

his well-being back then had now become habit for both

of them. Still, she hadn't expected this when he'd asked

townhouse—though she supposed she should have. Eight

years in the country among her books and correspondence

must have dulled her wits.

She looked into his smiling face and added, "You

are trying to manipulate me."

He crossed his arms. "I've been manipulating you

from the first. Of course I was planning your marriage

for the Coronation season, instead of your cousin Kate.

"I am no lass. More of a Scottish milkmaid tricked

out in a silly dress." She glanced down at her gown, a

frothy creation of palest foam green and creamy lace, and

grimaced. Why she had allowed her dressmaker to talk

her into such an unbecoming gown, she had no idea. A

moment of feminine weakness, perhaps? Here she was, a

more suitable for a delicate young miss's come out. She'd

come out, and gone back in, quite some time ago. What

she wore might be all the rage, but it was most definitely

not her. "Mutton dressed as spring lamb," she scoffed.

"All the more reason for you to do as I bid. Every

eligible man in Britain is waiting in the ballroom upstairs

for you. And you look lovely."

"You're beautiful, my dear."

"You are looking through the eyes of love, sir." She

laughed bitterly. "And all those eligible men will tell me

I'm beautiful because they're looking through the eyes of

She was the rarest of rarities, a woman who was

heiress to a ducal title and fortune in her own right. She'd

have ignored them tonight as she always did, but her

father had just informed her that she must choose a

husband. They'd been arguing about it for nearly half an

hour now, late for their own ball.

and cheats from the one who will truly mean it."

"I didn't before," she reminded him.

"You were young. You are not so young now," he

went on relentlessly. "And I want grandchildren."

She simply was not ready to deal with this subject—

would never be able to deal with it.

She had left her heart somewhere in North Africa —

well, it had been broken, anyway—and her freedom was

all she had left. Now her father was demanding she give

She had been betrothed once and betrayed twice.

She wanted no man in her life. No husband. Children

would have been a blessing, but she was willing to settle

for supporting large numbers of orphans rather than

It was not that she loathed the idea of a man in her bed.

Her problem was exactly the opposite, in fact. Passion

was her downfall, one she would not allow in her life ever

"If you wish to dandle something on your knee, I

don't see why I have to be involved in the process."

Honoria took a deep breath. "You are not so old, sir. Any

woman in Britain would be lucky to have you as a

She had expected the hurt look that came into his

eyes. She had not expected his fist to come down

forcefully on the polished alabaster top of the table next

to him. She took an involuntary step back.

Her father's face, as red as a beet for a moment,

returned to normal and he crossed his arms. "I will not

wed again, my dear. You know that very well," he said

grandchildren, but among the most important is that I

want something of your mother to survive. You are so

like her, in looks and in temperament." He put his hands

on her shoulders. "I want you to have children and

grandchildren of your own. You are my and your

"Therefore," he added sternly, "you will wed. Soon,

Pyne. I command it."

And he had the right to command her, as head of the

family. He very rarely did. He was a man who asked

nicely, or suggested, or merely hinted—and not very

often, or for very much. She was used to doing pretty

much as she pleased most of the time, and liked it that

way. But it was his right to command her obedience, as

his daughter and his heir. She could see the stubbornness

in his eyes and in the set of his jaw. She'd often seen

similar stubbornness looking back at her out of a mirror,

made up his mind.

"I vowed never to marry after Derrick broke off our

engagement," she told him. "Perhaps I have never

mentioned that to you before, but I did make the vow."

"You were young and heartsore. Your heart has had

time to mend. It is time for you to go back out into the

world." He smiled fondly, though he looked no less

adamant. "Go out and conquer it."

"Ah," she said. "You want me to heave some likely

lad over my shoulder and haul him home for stud service,

"No. I want some likely lad to be strong enough to

conquer you." He waved a hand in the general direction

of the world beyond the library. "Unfortunately, we have

to start the search among the peers of the realm. It's not

milquetoast you need, my girl, but a real man. We'll start

with every eligible bachelor of noble birth in Britain, and

move on from there if we have to. I'd as soon see you

married to an innkeeper, if the man made you happy."

part of this manhunt."

"The hunt is on, whether you like it or not." He

offered her his arm. "And now it's time to meet our

Blast! Well, there was really no use in prolonging

the argument. All she had to do was go off and be her

usual prickly self, and the suitors would scurry off to find

more accommodating game. She smiled just a little at that

thought. Then she plucked off her spectacles, which she

never wore in public, and gave her father her arm.

would-be St. Georges have a turn at the dragon."

"It's about time your father asked me to take you in

hand," Cousin Kate whispered, none too quietly, as she

stood beside Honoria in the receiving line by the

doorway. Most of the guests had finally arrived, and the

duke was now making his effusive way around the knots

of gathered people. Honoria lingered by the entrance, in

the formal role she preferred. She could speak a polite

word or merely nod and send people on their way as

propriety demanded. Here she was in control while

behaving in a manner that was utterly correct for her

"I have plans, indeed I do," Kate added. "There

hasn't been a wedding in the family in too long a time."

Lady Kate Kilgrew was a widow in her fifties, a

second cousin of the duke's on his mother's side. The late

and rumor had it that Lady Kate had as well. She never

denied having been anyone's mistress, though she never

claimed to have been, either. She said that gave her an air

of mystery, though in these sadly moralistic times it was

better to come down on the side of discretion, if a choice

had to be made. She was as fond of society as Honoria

was of privacy, and quite the most opinionated person

Honoria had ever met, save herself, of course. Lady Kate

was a short thing, as round and pink as a ripe peach.

"I've married off four children of my own," Lady

Kate reminded Honoria, tapping her on the arm with her

folded fan when Honoria persisted in ignoring her. "So it

isn't as if I'm not experienced in these matters. You look

ridiculous in pastels, by the way," she added.

"I know," Honoria agreed. She knew Kate had been

expecting an argument and was pleased to have

confounded her. "I've already ordered gowns more to my

taste, so you needn't bother foisting your dressmaker on

me." She plucked at the satin bell of her skirt. "This was