On the Ropes 2: Insidious Obsession 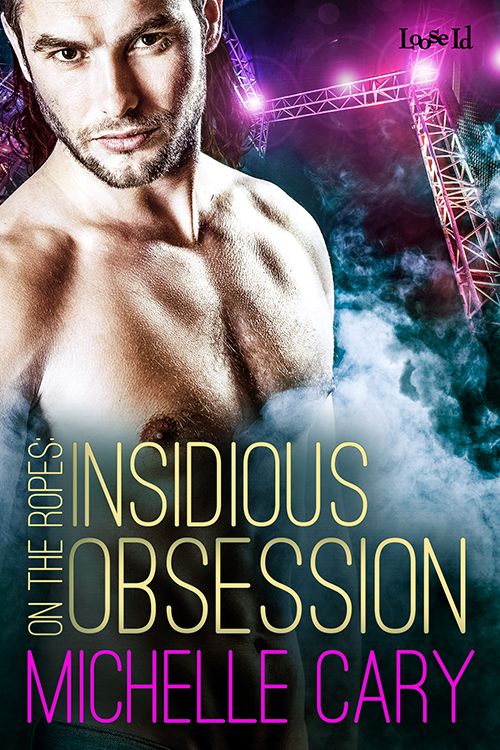 On the Ropes 2: Insidious Obsession

Amber Star walked the arena’s interior hallway, the sound of her footsteps buried beneath the beat of executive Mark Lane’s big boots. Still not quite believing her eyes, she slid a sideways glance at the wrestling legend. Was she really here? Had all those years of hard work, sacrifice, and dedication really paid off? Even as she struggled to keep up with the big man’s stride, the moment felt surreal, as if she were still tucked in her bed dreaming.

“I’m sure this is a big blur to you right now,” Mark said. “I still remember when I first started. I was excited and scared out of my mind at the same time.” He cast a quick smile her direction before pointing down the hall. “I’m taking you to catering. You’ll find most of our wrestlers there at any given point during the day. With some luck, it’s where we’ll find Lexi. I’m going to ask her to mentor you until you’re settled.”

The lump in Amber’s throat grew, and she swallowed hard. “Lexi? As in Lexi Blackwell?”

Mark’s grin widened as he reached for the door handle. “The very same.”

Lexi Blackwell, daughter of the great Bob “The Bruiser” Blackwell, was one of Extreme Ultimate Wrestling’s Vixens. At the age of twenty-seven, Lexi had spent six years establishing her megastar stature within the company. Amber’s already nervous stomach did a little flip. During her climb to the top, Amber had studied Lexi and patterned herself after the star. Hopefully Lexi didn’t end up being a bitch like so many of the women Amber had worked with on her way through the lower ranks.

Mark pulled the door open and ushered Amber inside. The yummy aroma of pot roast—or was it meatloaf?—billowed through the air, blending with music and conversation. Several tables covered with food stretched along the back of the room. Smaller tables with chairs dotted the room, some empty, some filled with stars eating and talking. Their conversations mixed and mingled, creating a lively atmosphere.

A sitting area containing several couches and small sitting cubes peppered the space to her left. Mark headed in that direction, and she followed closely. She spotted Lexi Blackwell draped across the lap of The Tribunal member Logan Lanier. His large hands held Lexi in a way that telegraphed his protective nature. They appeared to be watching an arm-wrestling match taking place at a nearby table.

Amber turned her attention to the men at the table and nearly tripped over her feet as her mind tried to process everything. The legend, Kyle Stinson, with a look of determination on his face, arm wrestled The Tribunal member Jason Rivers. On-screen, Jason acted eccentric, almost crazy in nature. If the relaxed, near blissful look currently on his face was any indication, she’d bet he was like that in real life too.

“Come on, Kyle. You’re not gonna let Rivers beat you,” Garrett Patrick urged from a few feet away.

“Kick his ass, Jason,” said a voice from across the room. She turned her head to see who yelled and stopped dead in her tracks. With a cup in each hand, Cole Collins, The Tribunal’s youngest and sexiest member, strode toward the group, a grin on his face. The trio of Jason Rivers, Cole Collins, and Logan Lanier, had just left the lower ranks of Ultimate Extreme Wrestling when she arrived, so she hadn’t gotten a chance to meet them. Instead, she’d watched Cole and company rise to fame over the past six months. Seeing him in person was very different from watching him on television. With the lights and cameras on him, he looked menacing and dangerous. However, close up, he appeared more charismatic and approachable.

As if he sensed her attention on him, he turned his head and looked directly at her. Amber’s stomach did another little flip. Unfamiliar warmth burned low in her abdomen as her attraction bloomed. His smile widened, and the feeling intensified. “Well, hello.” He took a small step in her direction. “I haven’t seen you around here before.”

“That’s because she’s just starting today,” Mark cut in and nodded at her. “Follow me.”

She gave Cole a shrug and small smile, then turned back to Mark, but only managed to take a few steps before glancing over her shoulder at Cole again. Something about him pulled at her curiosity.

With his long, light brown hair and near permanent five-o’clock shadow, Cole appeared to be a bit of a wild child. Not normally the type she found attractive, but something about him struck a chord deep inside. The look in his eyes conveyed an honesty and trust she rarely saw in people, and he seemed to have a boyish charm that made her want to smile. Whatever the reason, it stoked her long-dormant desires.

Still, with her being new, she didn’t need any type of romantic entanglements. She’d worked too hard for far too long to allow something as elemental as sex to get in her way. No matter how attractive she found him, she couldn’t risk derailing her focus.

Doing her best to dismiss Cole from her thoughts, Amber turned her attention to Lexi, who was now speaking with Mark. She remained on Logan’s lap, with one arm draped lazily around his neck. Amber knew the on-screen story had Lexi and Logan as a couple, but it appeared as if they might be one in real life too.
Interesting.
In the lower ranks of wrestling, dating coworkers was strictly forbidden and resulted in termination of contract. Maybe because Lexi was such a big star that rule didn’t apply to her, or maybe the rules for the main roster were different.

“Amber”—Mark motioned to her—“this is Lexi Blackwell.” He turned to Lexi. “This is Amber Star. She’s our newest addition to the Vixen roster. Lexi, if you wouldn’t mind, I’d appreciate it if you’d look out for Amber for a little while? At least until she settles in a bit more.”

Immediately Lexi’s smile morphed into a frown, and she folded her arms across her chest. “Yes, I mind. What? Do you think I have time to babysit some rookie?”

Shock ripped through Amber as she cut her attention from Lexi to Mark and back. Had Lexi really just back talked her boss?

Before Mark could reply, her frown was gone, replaced by a large smile. “I’m just screwing with you. Of course, I’ll help the newbie out.”

Amber let out a breath she didn’t even realize she’d been holding as relief washed through her. The last thing she needed right now was any problems.

Lexi reached in front of Mark and extended her hand. “Nice to meet you, Amber.”

She accepted Lexi’s hand. “You too. I just have to say it’s an honor to meet you.”

“Oh don’t say that,” Logan groaned. “You’ll give her a big head, and her ego is gargantuan already.”

With her free hand, Lexi grabbed a handful of his long dark hair and pulled. “My ego? You might want to look in the mirror sometime, buddy boy. We need a full-size tractor trailer for your ego.”

He leveled his gaze on her. “You’re playing with fire, sweetheart. Unless you want to get burned, I suggest you let go of the hair.”

“In other words,” Cole added from over Amber’s shoulder, causing her to jump, “he’s gonna beat her ass until she stops being a brat.”

Amber stared at Cole for a moment as his words sank in. Surely he didn’t mean Logan would actually strike Lexi. Did he? Confused, she turned back to Lexi and Logan as Garrett added, “Which pretty much means she won’t be able to sit down for at least a week.” Amber arched a brow at Garrett’s confirmation. Just what kind of relationship did Lexi and Logan really have?

Lexi cocked her head to the side and stuck her tongue out at him.

“Oh!” Cheers went up from the table as Jason raised his hands in victory. “Oh yeah, and another one bites the dust,” Jason crowed.

Kyle shook his head and rubbed his wrist. “Damn, Rivers.”

Jason leaned back in his chair and smiled. “Best two out of three?”

After spending the morning going over her work schedule and potential story line, Amber sat across from Lexi and struggled to focus. Every time she turned her head, she spotted another star. “I still can’t believe I’m here,” she murmured as she picked up a potato chip.

Lexi laughed. “A bit starstruck, are we?”

Amber shot her an embarrassed grin. “Just a little. I know I’m totally acting like an amateur, but I can’t help it. You have no idea how long I’ve been dreaming about being here.”

“Actually, I probably do. When I was growing up watching my father wrestle, I knew I wanted to be here someday.” Lexi glanced over to where the men gathered around the arm-wrestling table. “Even now, there are days when I still have to pinch myself.”

Amber noted the dreamy look in Lexi’s eyes and followed her gaze to where Logan towered over Cole, who currently arm wrestled Garrett Patrick. “So you and Logan?”

Lexi slowly turned her attention back to Amber and smiled. “Yeah.”

“I didn’t realize management allowed dating among roster members. In the lower ranks, if they catch you dating, you’re fired.”

“In the lower ranks you’re supposed to be learning about the business,” Lexi replied. “The rules here are very different.”

“I thought you guys were only a stage couple.” She noted the rather large diamond on Lexi’s ring finger. “That’s a nice diamond. So you guys are engaged?”

“Thank you.” Lexi held her hand out and appeared to admire the ring. “We haven’t set a date yet. Honestly, I’m in no hurry, but being engaged makes Logan feel better. The ring is his way of laying claim to me.”

Lexi returned her hand to the table and grinned. “No. Of course I’m not, and Logan doesn’t treat me that way. However, he is very much an alpha male and loves being in control.”

“Actually,” Lexi replied, “if we’re speaking in those terms, most of the men here would be considered beta males. Tough but not leaders of the pack, so to speak.” She turned her attention back to where the men sat. “Logan, Jason, Cole, Kyle, Garrett…they’re all alphas. Which is why they feel the need to one-up each other.”

“So I guess that makes you an alpha female, if we’re sticking with that analogy,” Amber offered.