Read On the Spectrum of Possible Deaths Online

On the Spectrum of Possible Deaths 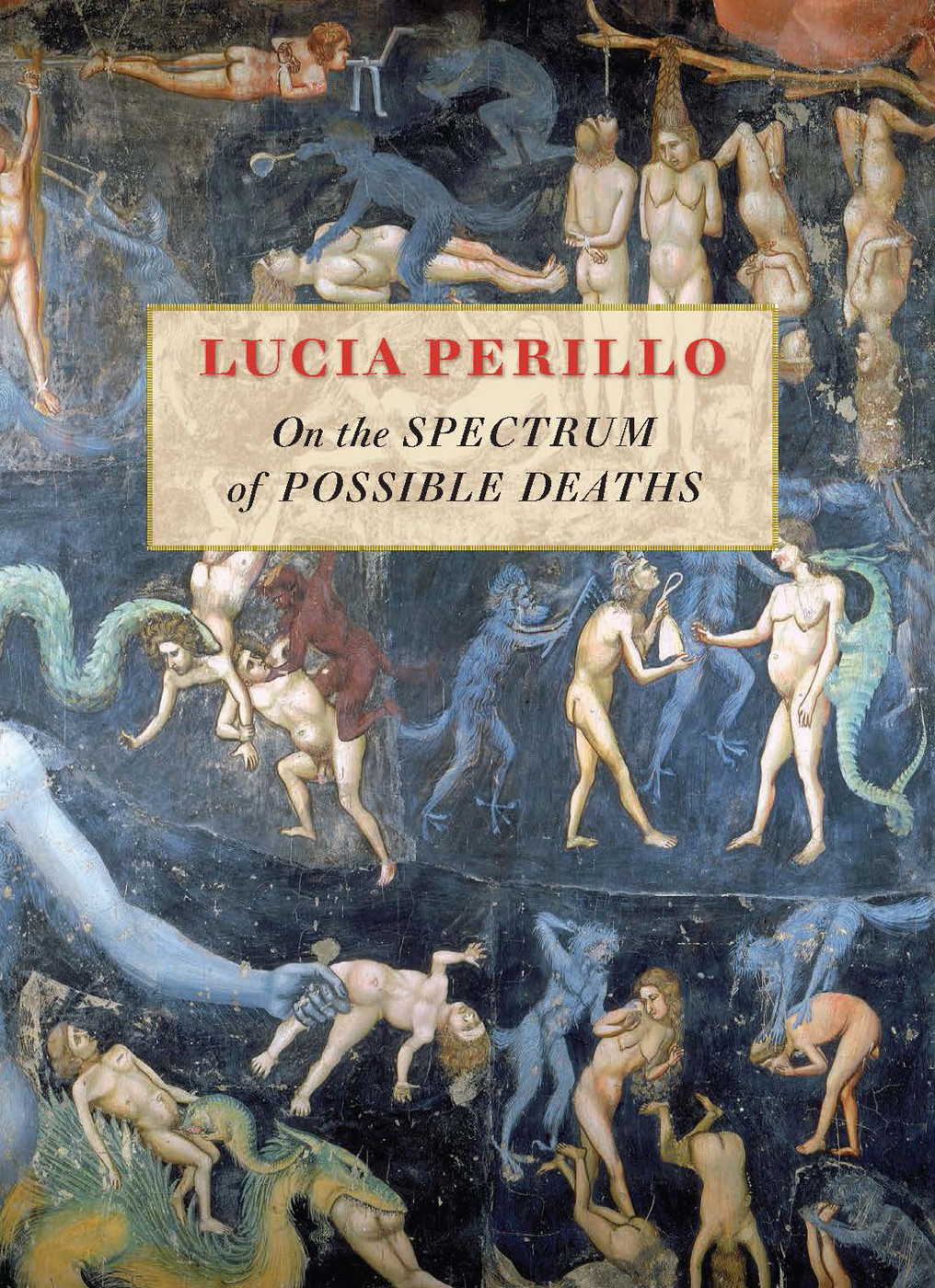 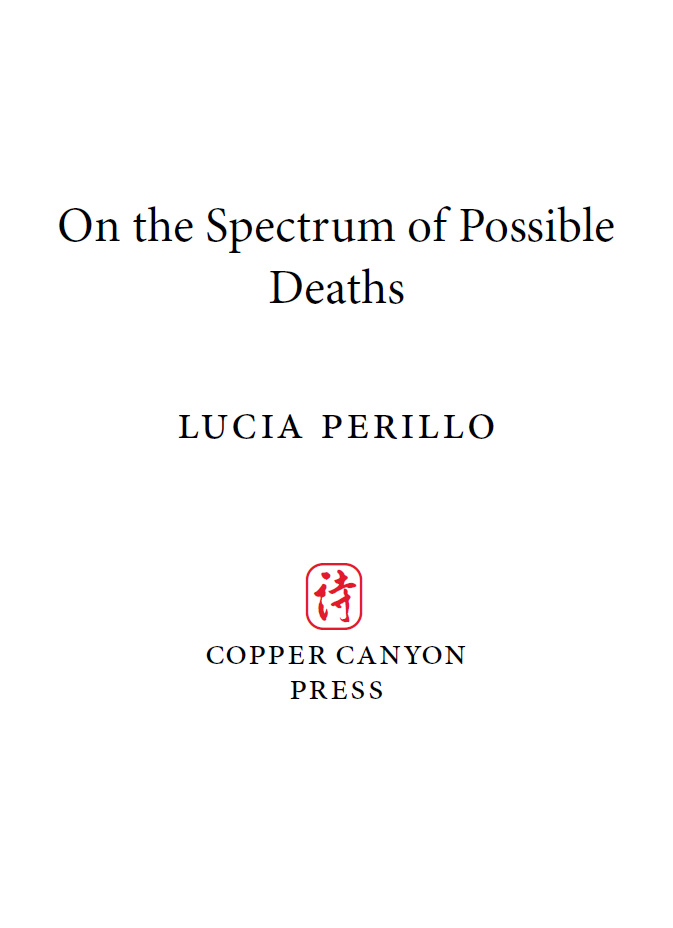 Copper Canyon Press encourages you to calibrate your settings by using the line of characters below, which optimizes the line length and character size:

Please take the time to adjust the size of the text on your viewer so that the line of characters above appears on one line, if possible.

When this text appears on one line on your device, the resulting settings will most accurately reproduce the layout of the text on the page and the line length intended by the author. Viewing the title at a higher than optimal text size or on a device too small to accommodate the lines in the text will cause the reading experience to be altered considerably; single lines of some poems will be displayed as multiple lines of text. If this occurs, the turn of the line will be marked with a shallow indent.

Thank you. We hope you enjoy these poems.

This eBook edition was created through a special grant provided by the Paul G. Allen Family Foundation. Copper Canyon Press would like to thank Constellation Digital Services for their partnership in making this eBook possible.

For all the Roberts

No death for you. You are involved.

Achilles slays the man who slew his friend, pierces the corpse

behind the heels and drags it

a bride and groom. Then he lays out

a banquet for his men, oxen and goats

and pigs and sheep; the soldiers eat

until a greasy moonbeam lights their beards.

in the morning more animals must be killed

for burning with the body of the friend. But Achilles finds

no consolation in the hiss and crackle of their fat;

not even heaving four stallions on the pyre

can lift the ballast of his sorrow.

the throats of his friend's dogs,

killing what the loved one loved

to reverse the polarity of grief. Let him repent

by vanishing from my concern

after he throws the dogs onto the fire.

The singed fur makes the air too difficult to breathe.

When the oil wells of Persia burned I did not weep

until I heard about the birds, the long-legged ones especially

which I imagined to be scarlet, with crests like egrets

weighting the feathers they dragged through black shallows

at the rim of the marsh. But once

I told this to a man who said I was inhuman, for giving animals

my first lament. So now I guard

who appears behind the army base at dusk,

come there for scraps with his head lowered

though it is not.

I have become what I have always been and it has taken a lifetime, all of my own life, to reach this point where it is as if I know finally that I am alive and that I am here, right now.

TOBIAS SCHNEEBAUM
,
Keep the River on Your Right

When you spend many hours alone in a room

you have more than the usual chances to disgust yourselfâ

this is the problem of the body, not that it is mortal

but that it is mortifying. When we were young they taught us

do not touch it, but who can keep from touching it,

from scratching off the juicy scab? Today I bit

a thick hangnail and thought of Schneebaum,

who walked four days into the jungle

and stayed for the kindness of the tribeâ

who would have thought that cannibals would be so tender?

This could be any life: the vegetation is thick

down its tunnel until one night you find yourself

walking as on any night, though of a sudden your beloved

friends are using their stone blades

to split the skulls of other men. Gore everywhere,

though the chunk I ate was bland;

it was only when I chewed too far and bled

that the taste turned satisfyingly salty.

How difficult to be in a body,

how easy to be repelled by it,

eating one-sixth of the human heart.

their heads on one another's thighs

while the moon shined on the river

for the time it took to cross the narrow sky

making its gash through the treesâ¦

My Father Kept the
TV
On

like turtles sunning, the jackets hunched, with a little

hump in the hunch from the trough of the spine,

bearing a white sticker with the typewriter's Courier

font rendition of the decimal system

taped to the book, the tape's yellow orange-almost

(depending on how old) reinforced with threads.

Meanwhile his eyes drifted back and forth

back and forth until the book slid to the floor.

The flag then. Then snow. Or the corporate logo

of the eyeâ all night the night would watch him,

plural,
them.
Just ask my friend whose father

was a drunk, a highball glass on the nightstand and a swizzle

stick to mark his place. Still, on Thursday nights

he stumbled down to the reading room

to leaf through the new arrivals.

Oh green republic where the pilgrims came to land!

that I'm going to side with books, with the days

before the lithium-ion battery, but after

Philip Roth and John le CarrÃ© were born, books not too

highbrow or too low, but sometimes thick

and overdue. Books the fathers read to escape us

who were the shackles that the plodding days

latched on to them who'd started out their lives with war, so this

was perfect, courting danger in their underwear,

feeling the breast of the vixen stiffen,

slipping their hands into the thief's black glove.

After the Names Are Gone, the Damage Will Remain

Though the twins were not identical, they both had skin

so thin & clear I could see their veins' squiggling underneath.

One with red hair, one with white

& the veins made their combined colors patriotic

if a little terrifying

in the auditorium where we'd assembled,

their tears falling in a formal style of grief

reserved for civic purposes, I learned this

from mothers who'd stood by the mailbox, weeping

as we filed by them in the school bus

six years before, when bullets ruined the famous head

of the famous handsome man. Now

news that made me scratch an old mosquito bite

& scrutinize the upturned faces of my shoesâ

even in my girlish nerdfog

I must have understood that some will not withstand posterity,

that all the bodies on the beach at Normandy

still lead to the muse's turning her cool marble shoulder.

& the curve of their hot foreheads. But

how tentatively one must ask the nouns & verbs

to step apart for Eisenhower, though he ransacked

his pale head hovers, yet he does not go around

sticking his foot in the door

the pale girl of my ode slams shut.

Half costume jewel, half parasite, you stood

swaying to the music of cash registers in the distance

while a helicopter chewed the linings

of the clouds above the clear-cuts.

And I forgave the pollen count

while cabbage moths teased up my hair

before your flowers fell apart when they

turned into seeds. How resigned you were

to your oblivion, unlistening to the cumuli

as they swept past. And soon those gusts

will mill you, when the backhoe comes

to dredge your roots, but that is not

what most impends, as the chopper descends

to the hospital roof so that somebody's heart

can be massaged back into its old habits.

Mine went a little haywire

at the crest of the road, on whose other side

you lay in blossom.

As if your purpose were to defibrillate me

with a thousand electrodes,

I had my precinct wrong and went to Garfield Elementary

where the hall monitors would not let me through

because I live on the wrong side of the boundary. I could hear

my neighbors, listening reasonably to one another,

listening even to the man who is my adversary

because he leaves his dog's crap on the sidewalk's grassy strip.

If he wants to fly, Peter Pan has to focus very hard on Tinker Bell.

If he is quiet and he concentrates, then he can fly.

The girl who spoke sat in the hallway,

so I asked if she was working on her reading. “No,

she's autistic those are her socialization cards,” said her mother,

so she (the mother)

could take part in the caucus.

He can fly only when he focuses on Tinker Bell.

He can focus only when he listens.

In the classrooms, my neighbors sat in chairs

that shrank their knee-chin distance pitifully. I heard my adversary

and that's how history gets made. Quick

write it down before it slips

When he hears Tinker Bell sing, Peter Pan is happy.

In the classroom, something was decidedâ

I heard the collective exhale of assent

before people filed out, looking giddy and grave. When she returned

I asked Terri's mother what was up

with the singing, and she said that other children

tormented her girl with songs.

Go tell that to a poet.

It would explain a lot about the current state of the art.

and, like the Beatles, his song made the girls scream

so loud they drowned the song. Then they yelled

See yonder our despiser
and tore off his head.

Peter Pan and Tinker Bell like to sing together
.

They are very happy when they sing.

You know one girl alone wouldn't have done it,

and this is not just a matter of strength. There's a fuse

running from one of us to the otherâ lucky thing

all that's in my pocket is this old packet

I mistook for a matchbook.

She thanked me, the mother, even though Terri

had been reading her cards to my dog. Note

I carry a blue (biodegradable and perfumed)

plastic crap bag, though it hadn't been used yet,

there at the school, and I was letting it flap

from the pocket of my red flannel shirt

let us discuss the warblers.

How sweetly they torment us from the budding trees.

I Want To Be Yours by Mortier, D.M.
Madwoman On the Bridge and Other Stories by Su Tong
The Healing Quilt by Lauraine Snelling
Murder on the Ol' Bunions (A LaTisha Barnhart Mystery) by Moore, S. Dionne
Divergent by Roth, Veronica
Old Habits by Melissa Marr
Breaking Free by Alexis Noelle
The Orphan King by Sigmund Brouwer
Once More From the Top (The Women of Willow Bay) by Nan Reinhardt
Jenna's Consent by Jennifer Kacey
Our partner