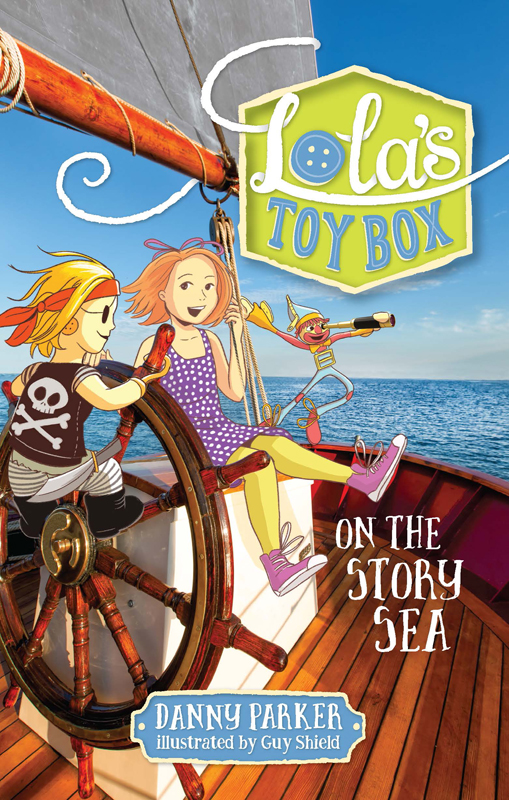 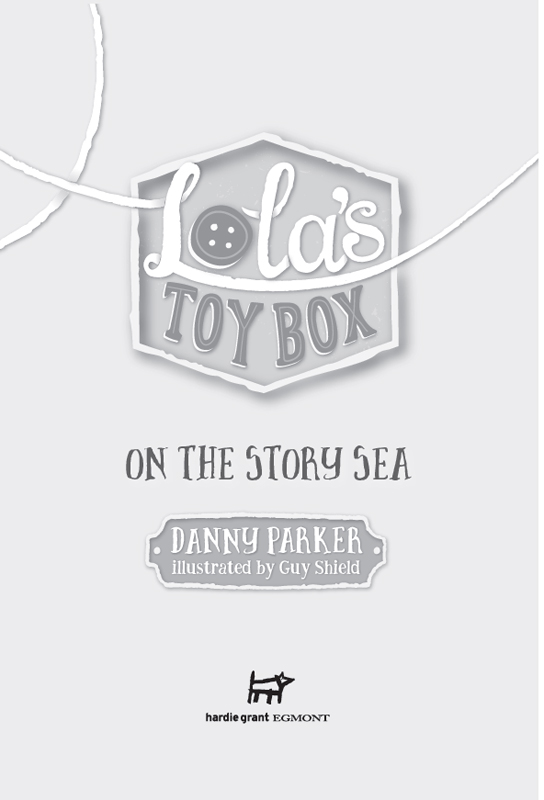 It was the weekend, and Lola was going to a fancy-dress party.

But she had nothing to
wear
to a fancy-dress party!

She did have an old princess dress in the back of her closet.

But when Lola dug it up, she saw a big square cut out from the front of it.

Lola smiled.
Oh, that's right!
She'd cut it out to make a blanket for her toys. She didn't really like princesses these days, anyway.

Hunting around in her cupboard, she found some long stripy socks, and an old pair of jean shorts that she had almost grown out of. 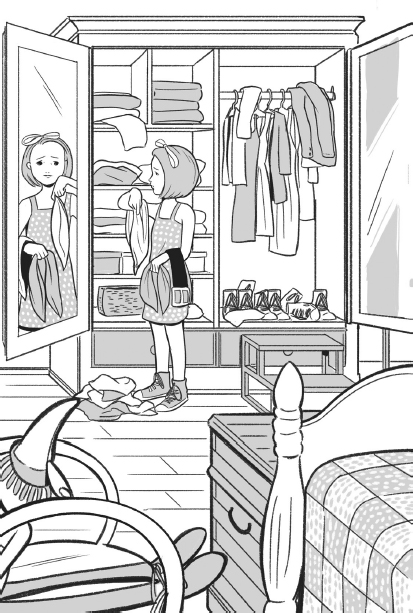 She also found some of her mum's old scarves, and a belt.

Just then, her brother Nick looked into her room. âWhat are you going to wear to the party?' he asked.

âI know,' Nick snorted, âyou can pretend you're one of the ugly sisters from
Peter Pan
.'

âOr you could go as the ugly duckling from
Where the Wild Things Are
!' he said gleefully.

Then he bounded off down the stairs.

âYou're muddling up your stories!' Lola called after him.

She slumped onto her bed next to her favourite toy, Buddy.

Buddy was a learn-to-dress clown, with lots of zippers and poppers, buckles and buttons.

âEasy for you,' she told him. âYou could just go as yourself. A clown!'

Lola was tired of looking for a costume. And anyway, the party was hours away.

She had
much
better things to do.

At the end of the bed was her toy box. But this was no ordinary toy box. Oh
no
.

This was Lola's
magical
toy box.

Lola picked up Buddy and climbed inside her toy box. Then she carefully closed the lid.

The toy box filled with light and started to shake. Lola held onto Buddy as they jiggled around like a baby's rattle.

She squeezed her eyes shut.

Then, as suddenly as it had started, the shaking stopped. The lights went off again. Everything was still.

Lola took a deep breath, opened her eyes, and climbed out.

She had climbed
out of
a magnificent treasure chest, on the deck of an enormous ship!

âWow!' shouted Lola. âWhere in the Kingdom are we?'

She had to shout because the wind was blowing very loudly.

Buddy climbed out of the toy box behind Lola, clutching his hat with both hands.

âBless my buttons!' he yelled. âI think we are on a ship!'

Lola laughed. She wasn't sure she would
ever
get used to seeing her favourite toy come alive. Or hearing the funny way he spoke! 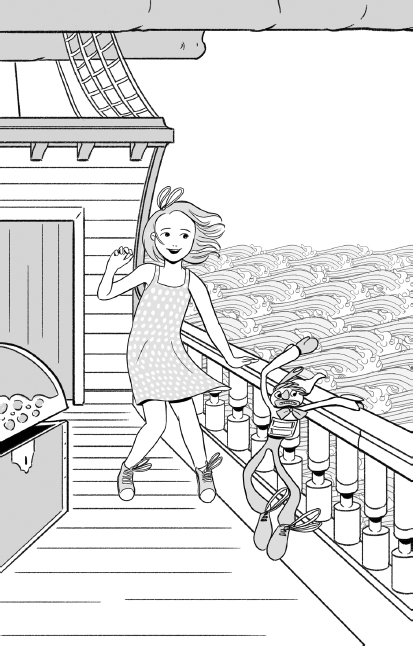 âI can see we are on a ship!' Lola shouted at Buddy. âBut where are we going?'

Her magic toy box always brought them to the Kingdom. It was a special place where toys came when they were not being played with at home.

Above Lola and Buddy were tall masts and huge sails. The sails were billowing in the wind.

âLet's get out of the wind,' yelled Buddy, pointing to a small wooden door. âThat's probably the door to the ship's cabin.'

Lola and Buddy held hands and leaned into the wind, taking one step at a time towards the cabin door.

But the wind was very strong. It was tough going.

Then, with no warning at all, the wind dropped.
Completely
.

Lola and Buddy tumbled onto the deck in a big heap of girl and toy.

Lola gasped as she sat up.

Right there, in front of her, was a pair of boots.

Lola looked up. Wearing those big pirate boots was the most awesome pirate Lola had ever seen.

âHello there,' said the pirate. âI am Pirate Sal, at your service.'

Lola clambered to her feet.

She recognised Pirate Sal at once. Lola had had a whole set of pirate puppets when she was little.

She thought she'd lost them forever. Actually, she'd totally forgotten about them until â¦ um, that very minute.

They must have been in the Kingdom all this time!

She wanted to give the pirate a huge cuddle, but she wasn't sure if Sal was the cuddling type of pirate.

Sal had golden hair and blue eyes, and earrings made of gold buttons.

She also had a very sharp-looking cutlass and a
hook
for a hand!

âI've heard rumours that a real girl has been visiting the Kingdom,' Pirate Sal said. âWelcome back!' 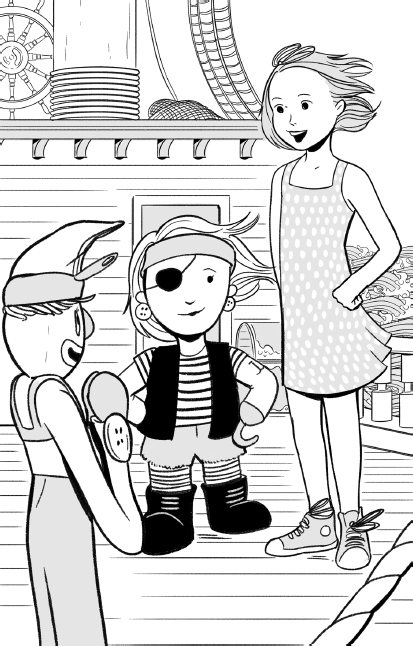 Word travelled fast in the Kingdom.

But Lola was puzzled.

Pirate Sal sounded
friendly
. She didn't sound at all
pirate-y
.

âThat's because you wouldn't understand me if I spoke like a pirate,' Sal told her.

Lola frowned. She had heard pirates talk. She had seen pirate films. There had even been a day at school when everyone had tried to
speak
like pirates.

âI think I'd understand you,' she said.

âAvast, ye land~lubbering squab and buffoon! Behold me bootstraps and canter on behind, d'ya hear? Afore the howlin' blizzard take ye over an' inta the drink!'

Lola and Buddy looked blankly at each other.