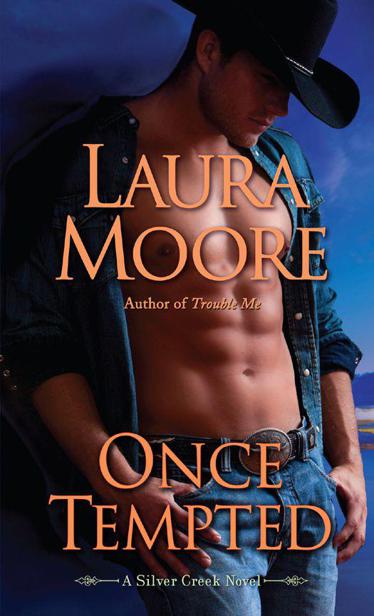 S
he lowered her window. The car was filthy, coated with salt and grime that no amount of squeegeeing could wash away. Now, with the barrier gone, she saw with twenty-twenty clarity the man approaching her.

Wow, that was a lot of muscle. A lot of seriously honed muscle if the way his jeans hugged his long thighs was any indication. His belt buckle was at eye level, a big oval thing just right for gripping. Dismissing this errant thought, she forced her gaze up, past his flat stomach and broad shoulders to the strong column of his neck. As her gaze reached the flat line of his mouth, it stalled, and she felt her own smile slip.

“Uh, hi.” For some reason her voice was breathless. It carried no further than a whisper. Nerves, she told herself. This place, the prospect of working here, even this man, they all unsettled her.

Once Tempted
is a work of fiction. Names, characters, places, and incidents are the products of the author’s imagination or are used fictitiously. Any resemblance to actual events, locales, or persons, living or dead, is entirely coincidental.

H
ER HUSBAND WAS
dead and she couldn’t cry.

“At my parents’. I needed to break the news and there was stuff I had to arrange—”

“Do you want me to come over? Or would you like to get away for a while? Giorgio is covering tonight’s event so I have the night off.” Giorgio Bissi was the manager of La Dolce Vita, the events planning company where both Anna and Tess worked—rather, where Tess had worked until two months ago.

“I’ll come to your place. It’s been rough going. But I don’t want to talk about it in front of Mom and Dad. You understand.”

“Of course.” Anna’s voice was a well of sympathy. “Come as quickly as you can. There haven’t been too many delays on the lines lately.”

Having grown up in the same neighborhood in Astoria as Tess, Anna knew to the minute how long the subway ride to Manhattan from Queens would be, coupled with a quick walk to the brownstone apartment on Sixty-Second between Second and First Avenues. That’s
where Anna lived with her boyfriend, Lucas, an associate at a law firm who logged insanely long hours.

Forty-five minutes later, Tess was outside Anna’s building and shivering despite the unseasonably mild December evening. Distracted as she was, she’d left her parents’ house without thinking to put a coat on over her long sweater and leggings. She pressed the button for apartment number three and Anna’s voice came over the intercom.

“I’m here,” Tess said and was buzzed inside. She stepped into a small entry hall illuminated by a shiny brass chandelier and matching wall sconces. In the corner by the staircase, a Christmas tree was decorated with bright lights, red and gold balls, and a cascade of tinsel. The star perched on its highest branch listed a little to the left. A menorah stood in the center of a long side table. Two of its candles glowed.

The holiday season was upon them, Tess realized with detached surprise. Normally this was her favorite time of year, the hustle and bustle of the streets, the laughter of people gathering together, the delicious food, and, above all, the sense of hope and promise.

Her steps rang out as she climbed the winding marble staircase. Reaching the third floor, she found Anna standing in the door of her apartment. She rushed forward, enfolding Tess in a fierce hug.

“God, I’ve missed you. I’m really sorry about David. Here.” Anna took her hand as though Tess were a child. “Come into the living room. I’ve opened a bottle of wine and made us something to nibble on.”

Anna and Tess had been friends since junior high when they played, or rather made feeble attempts to play, on the same school basketball team. They’d become bosom buddies for the simple fact that neither of them could dribble or pass, let alone shoot an orange ball through a silly net suspended ridiculously high in
the air. Why the other girls wanted to race up and down the court in those hideous uniforms was beyond their comprehension. Sister Louisa called them off the bench only when the team was losing so miserably it no longer mattered.

Anna’s family was huge, but the Vecchios always made room at the dinner table for Tess when her mom was either at church or visiting Christopher at the institution, and when her Dad was out drinking at Rosso’s until he was sufficiently anesthetized to come home.

Tess let Anna lead her into the living room with its vintage Kilim rug, burnt gold velvet sofa, and, the pièce de résistance, an ornate Murano chandelier that Anna had inherited from her grandmother. Its crystal teardrops twinkled above them, sharp-edged and fragile. Tess wondered whether the tears trapped inside her looked like that.

Releasing her hand, Anna said, “Sit. Eat. I’ll get the glasses and wine.”

A platter, artfully arranged with paper-thin slices of salami, prosciutto-wrapped asparagus, and mushroom caps filled with goat cheese, was centered on the mirrored coffee table. Tess knew each bite would be delicious. Like her mother and grandmother, Anna lived and breathed for the making and enjoying of food. She worked as the menu planner for La Dolce Vita but was already planning the next step in her career, fulfilling her dream to open a little trattoria where she could serve exactly what she wanted. She and Lucas had begun scouting real estate in Brooklyn.

For Anna’s peace of mind, Tess hoped she’d be able to swallow a mouthful of the appetizers in front of her.

She sank down on the sofa in the room she knew so well and felt a wave of disorientation wash over her. Everything, here and in the city, was familiar, yet she still felt oddly disconnected. Since receiving the phone call
from her estranged husband, David Bradford, two months earlier—the first she’d heard from him in twice that long—telling her that he was in a hospital in Boston, and that the doctors needed to operate on his brain, Tess’s world had flown to pieces, as if swept up in a vicious twister. But rather than landing in a Technicolor Land of Oz, she’d been transplanted to the sterile confines of Mass General Hospital.

From Logan Airport she’d jumped into a taxi, arriving just as the nurses were preparing to take David down to pre-op. Her wild glance took in the older couple standing rigidly by the narrow bed—his parents, she realized—before settling on David, thinner and paler since the day he’d walked out on her but still looking very much like the man she’d fallen head over heels in love with. He’d raised his gaze to hers and offered a single word. “Sorry.”

Then he’d closed his eyes.

She’d barely registered the bitter truth that once again David was going to shut her out and leave her with no answers when the nurse and the aide, with practiced efficiency, transferred David from bed to gurney. Shooting her a quick look of sympathy, they wheeled him away.

And he was gone. That one “Sorry” was the last word he would ever say to her. When she next saw him, David lay in a coma, unresponsive to any stimuli.

The sound of Anna’s heels clicking on the parquet floor drew Tess away from her sad recollections. How grateful she was to her best friend for always being there when she needed someone. Especially now. She straightened and relaxed her knotted hands.

Carrying two wineglasses and an open bottle of Sangiovese, Anna sat down next to Tess on the sofa, poured the deep red wine into the glasses, and passed her one.

Tess accepted the wine gratefully. At least now she had something to fill her hands; she wouldn’t be able to
glance down at the pale indentation encircling the second finger of her left hand. Unwilling to add yet another line of sadness to her mother’s face, Tess had continued to wear her wedding ring even after David, without a backward glance, had walked away from their marriage six months ago. She’d removed the ring only yesterday.

How soon would it be until the mark, too, was gone?

“Do you want to talk about it?” Mixed with Anna’s concern was a hint of eagerness.

Tess didn’t blame Anna for her curiosity. It was natural. Were they to switch places, she’d have had just as much trouble resisting the urge to know all the horrific but no less juicy details. And as Tess’s coworker, Anna had been given a front-row seat from the very beginning of Tess and David’s dazzlingly swift romance, the setting a swank cocktail party at a Fifth Avenue duplex with windows on Central Park, which La Dolce Vita had been hired to cater.

“It’s hard to know what to say,” Tess murmured. “Sometimes I wonder how different my life would have been if we’d never worked that event.”

The cocktail party was intended to launch the political career of some mucky-muck, and the first floor of the duplex had been crammed with lavishly dressed socialites dripping in gold and diamonds, and Armani-suited power brokers who lunched at their midtown clubs. Tess had been passing hors d’ouevres among the guests when David stepped in front of her silver tray. Though the other men were just as impeccably attired as he was, David, with his curly blond hair and laughing eyes, was far better looking than many of them. Tess, however, would never have gone beyond acknowledging that he was an extremely attractive man.

Renegade (Bad Blooded Rebel Series) by George, Mellie
The Bonner Incident: Joshua's War by Thomas A Watson, Michael L Rider
A Crown of Swords by Jordan, Robert
Rise of the Death Dealer by James Silke, Frank Frazetta
Rain Music by Di Morrissey
Heart of Fire by Linda Howard
The Hummingbird's Cage by Tamara Dietrich
Amy, My Daughter by Mitch Winehouse
The Stringer by Jeff Somers
aHunter4Trust by Cynthia A. Clement
Our partner