Read Once Upon a Wager Online

Once Upon a Wager 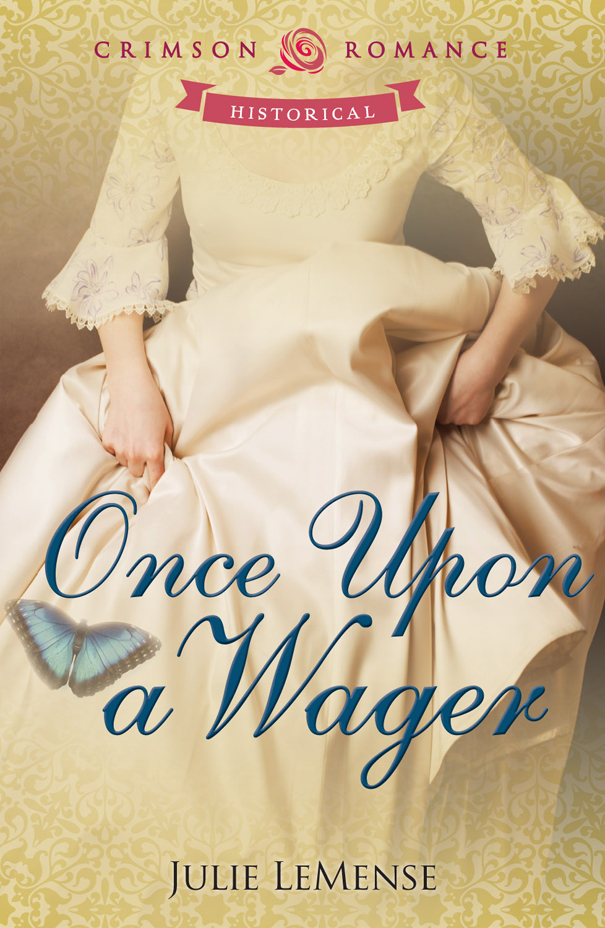 Once Upon A Wager
Julie LeMense

For my wonderful husband, Darren, and my three boys, Jack, Max, and Ben. They endured countless discussions about Regency era romance during the writing of this book, a threat to testosterone levels if ever there was one.

My thanks to everyone who read this as a manuscript, offering their time and advice, especially my sisters, Dani, Jean, and Kathleen; my sisters-in-law, Catherine and Mae; my friends Chrisanna, Constance, Donnamarie, Kari, Meg, Renee, and Tricia, not to mention Catherine's book club. Thank you, also, to Julie Sturgeon, my editor, who made my final draft so much better than my first. And lastly, thanks to my mom and dad. Even now, I can hear Dad saying, “What are you reading, Julie? Not another romance book!”

Alec Carstairs, heir to the eighth Earl of Dorset, looked down at the letter on his desk, torn between feelings of frustration and something else he refused to acknowledge. Her handwriting was as awful as everâundisciplined, like the young woman herselfâbut he knew better than to blame any long-suffering governess. Annabelle Layton did as she pleased. She always had, regardless of the consequences.

I am sorry, as you well know. Two years is past time to forgive me, don't you think? The whole episode is best forgotten. You needn't miss Gareth's party again. I do not, I believe, have a sickness that is catching.

Please say you will come.

A ragged sigh escaped him, the force of it sending the missive skittering across his desk, a Tudor-era monstrosity sent over from his family's London town home. Of course he'd forgiven her, if that was even the right word. She'd been so young thenâjust sixteenâuninhibited and free, with little thought for propriety or decorum. Forgetting the incident, however, was another matter entirely. It had irrevocably changed the way he saw her â¦ to his everlasting shame.

“My sister insisted I hand deliver it,” Gareth said, dropping himself into a tufted armchair across from the desk, startling Alec from his thoughts. He'd all but forgotten Layton's presence in the room, an unintended slight that had thankfully gone unnoticed. Alec's distraction would only have piqued Gareth's curiosity. After all, Gareth, like Annabelle, wasn't easily ignored. Both were golden haired and blue-eyedâa gift from the stunning Lady Layton. They'd been the boon companions of his otherwise lonely childhood. But none of them was a child anymore.

“Say yes, Carstairs. If you are any kind of friend, you'll not make me go back to Astley Castle by myself. God knows I'd rather stay in London.”

So would Alec, but he undoubtedly had different reasons for that sentiment. “My schedule is very full, Gareth. My father has secured a new seat for me in the House of Commons, and I must memorize the current legislation. It sounds like another excuse, but it is not.” And it wasn't. Not really. Alec felt the press of his new position closing in all around him: the impressive bachelor lodgings, the tailored wardrobe from Weston, the stacks of leather-bound folios packed with Parliamentary proposals. The eighth earl insisted that his son's surroundings reflect his recently elevated status.

“Have I ever told you your father frightens me? I swear his face would split down the center if he attempted a smile.”

“He is stern,” Alec admitted, “but only because he takes his responsibilities so seriously.” As a child, he'd been frightened of his father, as well.

“Well, he is a spoilsport all the same. You're only twenty-five. Why must you bother with the Commons?”

“I'd rather talk about the party, Gareth. I should think you'd be eager to attend. It will celebrate
your
birthday, after all.”

“Yes, but who knows what they've planned? Last year, the order of precedence going into dinner was decided not by titles, mind you, but by the high scores from an archery contest Annabelle organized out on the lawn.”

Alec refused to smile, despite the temptation. “Surely she didn't lead the way into dinner? She hasn't even made her debut.” To do so would have been highly improper. But not atypical.

“How did you know Annabelle won?”

“Annabelle will always play to her interests,” Gareth admitted. “Which means that this year, there will be lots of dancing at the party. She's mad for it, all of that spinning and skipping about. I ask you, who wants a Scottish reel back home when I can dance with the high-flyers in Covent Garden? Now there's a dance I don't mind doing.”

An inappropriate image of Annabelle came to mind, but Alec forced it aside, turning his focus on her brother. “You look as colorful as any bird-of-paradise in the Garden, Gareth. That satin waistcoat is nearly blinding in the afternoon light. My eyesight may not recover.”

“Just because Brummell dresses like an undertaker doesn't mean that I have to be similarly sepulchral. Especially when there is a party I must attend. Say you will come. I don't know the reason behind your estrangement with Annabelleâand do not deny there is oneâbut I'm certain that she's to blame. She can be a maddening creature. Still, she misses your friendship. She said â¦ let me think â¦ that it âhad more value than you have lately accorded it.' I had to promise to say exactly those words.”

Ah, their friendship. Old and inviolable once. Annabelle's barbs, like her arrows, were always well aimed.

With a deep breath, and before he could stop himself, Alec took a sheet of parchment and scribbled a few words upon it. He then folded it upon itself. He extracted a stick of sealing wax from a side drawer, heating it briefly above the beeswax oil lamp on his desk. He dripped a small puddle of wax where the folds met, and pressed it with his signet ring. Satisfied the seal would hold fast against Gareth's attempts to loosen it, Alec handed him the note. “I will be there,” he said. “But I have little doubt I will regret it.”

Gareth merely chuckled. “If you're going to regret something, make the pain of it worthwhile. Come join me at The Anchor on Park Street. I plan on getting well and truly drunk before I meet up with Digby to play cards. It will lessen the sting of my certain defeat.”

“Damien Digby is an ass. He makes you risk too much.”

“I can only stand one respectable friend, Alec. And that would be you,” Gareth added, “in case you're wondering.”

“You say ârespectable' instead of âboring' to spare my feelings, I know. Go on without me. If I'm to travel to Nuneaton for your birthday, there are things I must do.” Like memorizing names, organizing arguments, andâabove all elseâpracticing a brotherly smile.

After Gareth departed, Alec pushed away from his desk, and walked over to the study's large bay window, which looked out upon St. James Street below. Bracing his hands against the sun-warmed panes, he watched carriages and pedestrians move down the cobble-stoned thoroughfare, regretting his impulsiveness. Undoubtedly, his decision was a poor one. What would Annabelle read into his reply?

I've missed our friendship, too. I will see you at Gareth's party. But you must promise to keep your clothes on.

As he waited for his father to join him in the library at Dorset House, Alec took a brief glance at its worn leather tomes, all lined up in an orderly fashion along dozens of age-darkened wood shelves. This was Henry Carstairs's domain, the inner sanctum where he built his political coalitions, and entertained allies with brandy after dinner. On the rare occasions Alec had been in London as a child, it had also been the room where Father meted out his punishments. Perhaps that was why Edmunds, their butler, had seated him here, rather than in the family drawing room. The earl's note had hinted at his strong displeasure, though Alec was long past the age of birch rods and bloodied hands.

As if summoned by his thoughts, the earl strode into the room, a sheaf of papers tucked under his arm, his reading spectacles perched on the edge of his nose, making his eyes seem owlish. Trim and fighting-fit, Father would make for a very intimidating owl indeed, though Alec now bested him in height by two inches. He was no longer the small, sickly boy who had so often been ignored, along with his mother. He'd finally earned his father's attention, even his respect, despite their high price. Standing quickly, he offered a quick bow. “Good morning, Father. You wished to see me.”

“Take your seat,” the earl said, settling into the large baronial chair behind his desk. “I was not happy to learn that you are going to Nuneaton for the Layton boy's fete, when you should be here preparing for the Commons.”

“Even allowing for travel there and back, I will only be gone three days. I'll be bringing along the summaries prepared for me, and I've memorized the names of all the members, as well as their political positions.”

His father shifted in the chair, displeasure obvious in the tight set of his jaw. “I expected you to join us for dinner tomorrow. Lord Fitzsimmons and his daughter, Jane, will be in attendance. He's proven a useful ally in Parliament, and the girl is a reliable and sober sort. She'd make a good wife for you.”

Of late, Father had mentioned marriage repeatedly, and Miss Fitzsimmons in particular. “I'm sorry I was not informed of your plans,” Alec replied. “I cannot attend. I've already accepted the invitation to Astley Castle.”

“To travel there for a such a short trip, when our Arbury Hall will have to be readied. I think it an imposition.”

The Hall, which bordered the Layton estate, was kept in a constant state of readiness, because Father expected nothing less. It wouldn't be wise, though, to point that out. “I won't be staying at the Hall. I'll stop by to have the carriage checked and to greet the servants, but I will sleep at the castle. They'll have a number of overnight guests.”