Read One by One Online 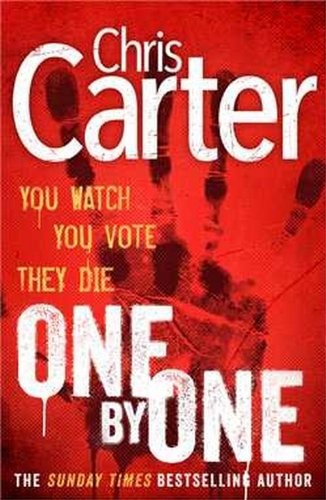 Born in Brazil of Italian origin, Chris Carter studied psychology and criminal behaviour at the University of Michigan. As a member of the Michigan State District Attorney’s Criminal Psychology team, he interviewed and studied many criminals, including serial and multiple homicide offenders with life-imprisonment convictions.

Having departed for Los Angeles in the early 1990s, Chris spent ten years as a guitarist for numerous rock bands before leaving the music business to write full-time. He now lives in London and is a Top Ten
Sunday Times
bestselling author.

The right of Chris Carter to be identified as author of this work has been asserted in accordance with sections 77 and 78 of the Copyright, Designs and Patents Act, 1988.

One Hundred and One

One Hundred and Two

One Hundred and Three

One Hundred and Four

One Hundred and Five

One Hundred and Six

One Hundred and Seven

One Hundred and Eight

One Hundred and Nine

One Hundred and Ten

One Hundred and Eleven

One Hundred and Twelve

One Hundred and Thirteen

One Hundred and Fourteen

One Hundred and Fifteen

One Hundred and Sixteen

One Hundred and Seventeen

One Hundred and Eighteen

A single shot to the back of the head, execution style. Many people consider it a very violent way to die. But the truth is – it isn’t. At least not for the victim.

A 9mm bullet will enter someone’s skull and exit at the other side in three ten-thousandths of a second. It will shatter the cranium and rupture through the subject’s brain matter so fast the nervous system has no time to register any pain. If the angle in which the bullet enters the head is correct, the bullet should splice the cerebral cortex, the cerebellum, even the thalamus in such a way that the brain will cease functioning, resulting in instant death. If the angle of the shot is wrong, the victim might survive, but not without extensive brain damage. The entry wound should be no larger than a small grape, but the exit wound could be as large as a tennis ball, depending on the type of bullet used.

The male victim on the photograph Detective Robert Hunter of the LAPD Robbery Homicide Division was looking at had died instantly. The bullet had transversed his entire skull, rupturing the cerebellum together with the temporal and the frontal lobes, causing fatal brain damage in three ten-thousandths of a second. Less than a full second later he was dead on the ground.

The case wasn’t Hunter’s; it belonged to Detective Terry Radley in the main detectives’ floor, but the investigation photos had ended up on Hunter’s desk by mistake. As he returned the photograph to the case file, the phone on his desk rang.

‘Detective Hunter, Homicide Special,’ he answered, half expecting it to be Detective Radley after the photo file.

‘Is this Detective
Robert
Hunter?’ The raspy voice on the other end was male, the tone calm.

‘Yes, this is Detective Robert Hunter. Can I help you?’

Hunter heard the caller breathe out.

‘That’s what we’re going to find out, Detective.’

‘I’m going to need your full attention for the next few minutes.’

‘Shut the fuck up and listen, Detective,’ the caller interrupted him. His voice was still calm. ‘This is not a conversation.’

Hunter went silent. The LAPD received tens, sometimes hundreds, of crazy calls a day – drunks, drug users on a high, gang members trying to look ‘badass’, psychics, people wanting to report a government conspiracy or an alien invasion, even people who claim to have seen Elvis down at the local diner. But there was something in the caller’s tone of voice, something in the way he spoke that told Hunter that dismissing the call as a prank would be a mistake. He decided to play along for the time being.

Hunter’s partner, Detective Carlos Garcia, was sitting at his desk, which faced Hunter’s, inside their small office on the fifth floor of the Police Administration Building in downtown Los Angeles. His longish dark brown hair was tied back in a slick ponytail. Garcia was reading something on his computer screen, unaware of his partner’s conversation. He had pushed himself away from his desk and leisurely interlaced his fingers behind his head.

Hunter snapped his fingers to catch Garcia’s attention, pointed to the receiver at his ear and made a circular motion with his index finger, indicating he needed that call recorded and traced.

Garcia instantly reached for the phone on his desk, punched the internal code that connected him to Operations and got everything rolling in less than five seconds. He signaled Hunter, who signaled back telling him to listen in. Garcia tapped into the line.

‘I’m assuming you have a computer on your desk, Detective,’ the caller said. ‘And that that computer is connected to the Internet?’

‘OK. I want you to type the address I’m about to give you into your address bar . . . Are you ready?’

‘Trust me, Detective, you will want to see this.’

Hunter leaned forward over his keyboard and brought up his Internet browser. Garcia did the same.

The caller gave Hunter an internet address made up only of numbers and dots, no letters.

Hunter and Garcia both typed the sequence into their address bars and pressed ‘enter’. Their computer screens flickered a couple of times before the web page loaded.

Both detectives went still, as a morbid silence took hold of the room.

The caller chuckled. ‘I guess I have your full attention now.’

The FBI headquarters is located at number 935 Pennsylvania Avenue in Washington DC, just a few blocks away from the White House and directly across the road from the US Attorney General. Aside from the headquarters, the FBI has fifty-six field offices scattered around the fifty American states. Most of those offices also control a number of satellite cells known as ‘resident agencies’.

Cronix by James Hider
Rocky Mountain Hero (To Love Again Book 3) by Fargo, Kate
Trash To Treasure Crafting 1 - Murder at Honeysuckle Hotel by Rose Pressey
The Return of the Indian by Lynne Reid Banks
Unfortunate Son by Shae Connor
Lord Foxbridge Butts In by Manners, Robert
The Freedom in American Songs by Kathleen Winter
The Devil All the Time by Donald Ray Pollock
Enchained by Chris Lange
Execution (The Divine Book 6) by Forbes, M.R.
Our partner