Read One Day His (The Someday Series Book 2) Online

One Day His (The Someday Series Book 2) 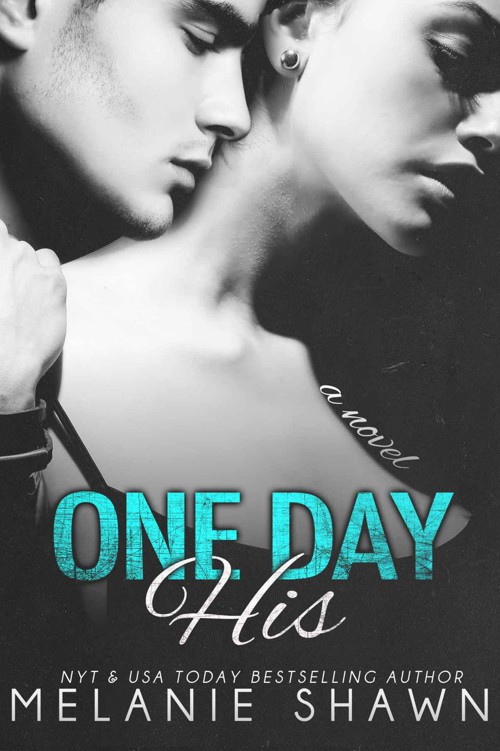 All rights reserved. This copy is intended for the original purchaser of this book. No part of this may be used or reproduced in any manner whatsoever without permission in writing from Melanie Shawn. Exceptions are limited to reviewers who may use brief quotations in connection with reviews. No part of this book can be transmitted, scanned, reproduced, or distributed in any written or electronic form without written permission from Melanie Shawn.

This book is a work of fiction. Places, names, characters and events are either products of the author’s imagination or used fictitiously. Any resemblance to actual events, locations, or persons, living or dead, is purely coincidental and not intended by the author.

Disclaimer: The material in this book is for mature audiences only and contains graphic content. It is intended only for those aged 18 and older.

One Day His is book 2 in the Someday Series.

NOTE: This trilogy was intended to be read in the following order:

Forever Us (The Someday Series, #3)

About the Someday Series

Other Titles by Melanie Shawn

I have to believe

One day, his arms will tightly hold me

My dreams will come true then

I will be happy

In the warmth of love

One day, his hands will touch my face

One day, his lips will kiss mine softly

One day, his heart will love me

If I just have faith that I will be

I
listened to
the surf pounding behind my mother’s house as Jace reached out through the driver’s window and pressed the code on the security pad. My eyes squinted as I peered through the slats of the gate at the house I hadn’t seen in months. The same house I’d spent every day of my eighteen years growing up in. A Mediterranean estate surrounded by lush, green landscaping, with an expanse of pristine sandy beach right behind it. The combination was a rarity even in exclusive Malibu. A realtor’s dream. And my nightmare.

As the black, ornate gates opened, a sick feeling of dread filled my stomach. Aesthetically speaking, the scene should have brought me peace. Everything about the estate had been created to form a calming, resort-like atmosphere. Every small detail had been meticulously planned by architects, designers, and landscapers to give off an air of luxury and relaxation. However, the emotions that rushed through me at the familiar sight were anything but tranquil.

For me, tranquil was the shores of Arcata Bay, which we’d just left ten hours before, the only place I had ever found peace and happiness. Jace and I had driven through the night down nearly the entire length of the state of California and had finally arrived at the golden sands of the Malibu shores where I had grown up.

The trip had gone smoothly. Mainly, I had been quiet. I couldn’t help the fact that I was in my head. Thinking of one thing and one thing only—the reason we’d driven all night. My mother. The person who, one way or another, was always pulling the strings. The puppet master. The car accident for which—it didn’t matter what the police report claimed—I
knew
she was one hundred percent at fault and I
knew
she would never face any consequences.

As we drove through the gates, my palms dampened and my heart raced. I was home. Although I would have to face my mother when she was released from the hospital, I was happy to have time to acclimate myself before my nightmare began.

“You can pull around to the side,” I instructed Jace, pointing to the small drive that would take us around the back of the property. I noticed that my finger was shaking and there was a tremble in my tone.

Wiping my hands on my jeans, I took a deep breath to steady myself as I listened to the sound of the tires moving over the loose gravel that lined the path of the staff driveway. As difficult as my mother’s irrational and extreme mood swings were to deal with, the time I spent on the receiving end of one of her tirades was never quite as frightening as the time leading up to when I knew I was going to see her. That holding-your-breath feeling. That waiting-for-the-other-shoe-to-drop nervous energy. The total uncertainty of not knowing if I was going to be walking into a flower-scented hug and over-the-top affection or a violent rant on something I had done wrong without realizing it.

We parked the car, and as I heard the engine shut down, I glanced over at Jace, wondering if he was picking up on my nerves. He was always so in tune to me and what I was feeling. Luckily, he was leaning forward, tilting his head to peer through the glass of the windshield, his eyes glued on the house.

I took a moment to study his profile. His strong jawline peppered with the sexy scruff of his five-o’clock shadow. His full lips that did magical things to my body. His long, dark lashes framing his crystal-blue eyes. His jet-black hair, so soft that it felt like silk when I ran my fingers through it. Even just sitting beside me in the truck, his hands casually resting on the steering wheel, after no sleep for the last twenty-four hours, he dripped sexiness. He had such an air of authority, control, command.

Jace’s voice snapped me out of my borderline groupie-status inner thoughts. I scooted to the front of my seat to see what he was looking at. As my eyes took it in and I pushed my negative emotional connection to the house down, I could, without bias, admit that it was impressive.

“Damn, Cat,” he said with an almost disbelieving tone of voice. “This house is…insane…”

“Yeah, it is,” I agreed, my own tone sounding flat.

As I stared at the structure in front of me, I did everything in my power to resist the internal war my nerves were waging against me. They were systematically infiltrating and conquering my mind, which was flooded with unwanted predictions of what was in store for us. My stomach, in which acid was doing a fairly good impression of the Pacific Ocean beside us, was swelling with waves and then crashing inside me. And my heart, which was now beating so fast that I was sure it would explode like a ticking time bomb if it didn’t slow down.

It had been hard enough growing up here, living with my mom’s illness, never knowing what or when her disease would appear when this was all I knew and I had
nothing
to lose. Now, I had a life. I was attending a school I loved. I had roommates I adored. And I had Jace, who was…everything.

Logically, I knew that this trip home shouldn’t put any of that in jeopardy. Emotionally, I was terrified that I would lose it all.

I knew that the longer I stayed in the safety of Jace’s truck, the harder it would be to force myself to face the reality that awaited me. I was already feeling dangerously close to hyperventilation and not having any luck slowing my breathing. So, deciding that I should treat this like ripping off a Band-Aid—sure it would hurt, but best to get it over with as quickly as possible—I wrapped my fingers around the steel door handle.

“Let’s go,” I announced, my words come out sounding borderline panicky as I struggle to get enough air into my lungs.

I turned my head, still struggling to catch my breath. His brilliant, blue eyes stared straight into mine, searching for answers that, if he got them, I was sure he wouldn’t like. His expression grew darker and more concerned with each second of his visual inspection.

Then, moving towards me on the bench seat, he slipped his arms around me and pulled me close. “Baby, if this is too much, just say the word. I have no problem getting back on the road and driving us straight home.”

I shook my head against the comforting feeling of his strong, broad chest. Like butter in a hot pan, I felt myself melt into his protective arms. I wished we could do what he’d suggested. Drive straight back to the only place I’d ever felt happy. I appreciated his offer. It was a sweet impulse, but it wasn’t practical.

Into the Black: Odyssey One by Evan Currie
KS17.5 - Cherchez la Femme by Dana Stabenow
A Husband for Margaret by Ruth Ann Nordin
Jonah's Return (Detroit Heat Book 3) by Lynn, Davida
First Love (Complicated Love Book 1) by Heather Carver
The Guns of Santa Sangre by Eric Red
Asperger Diaries: Jamie's New School by H.B. Lawson
Thief of Mine by Amarinda Jones
Mine to Crave by Cynthia Eden
My Vampire Cover Model by Karyn Gerrard
Our partner